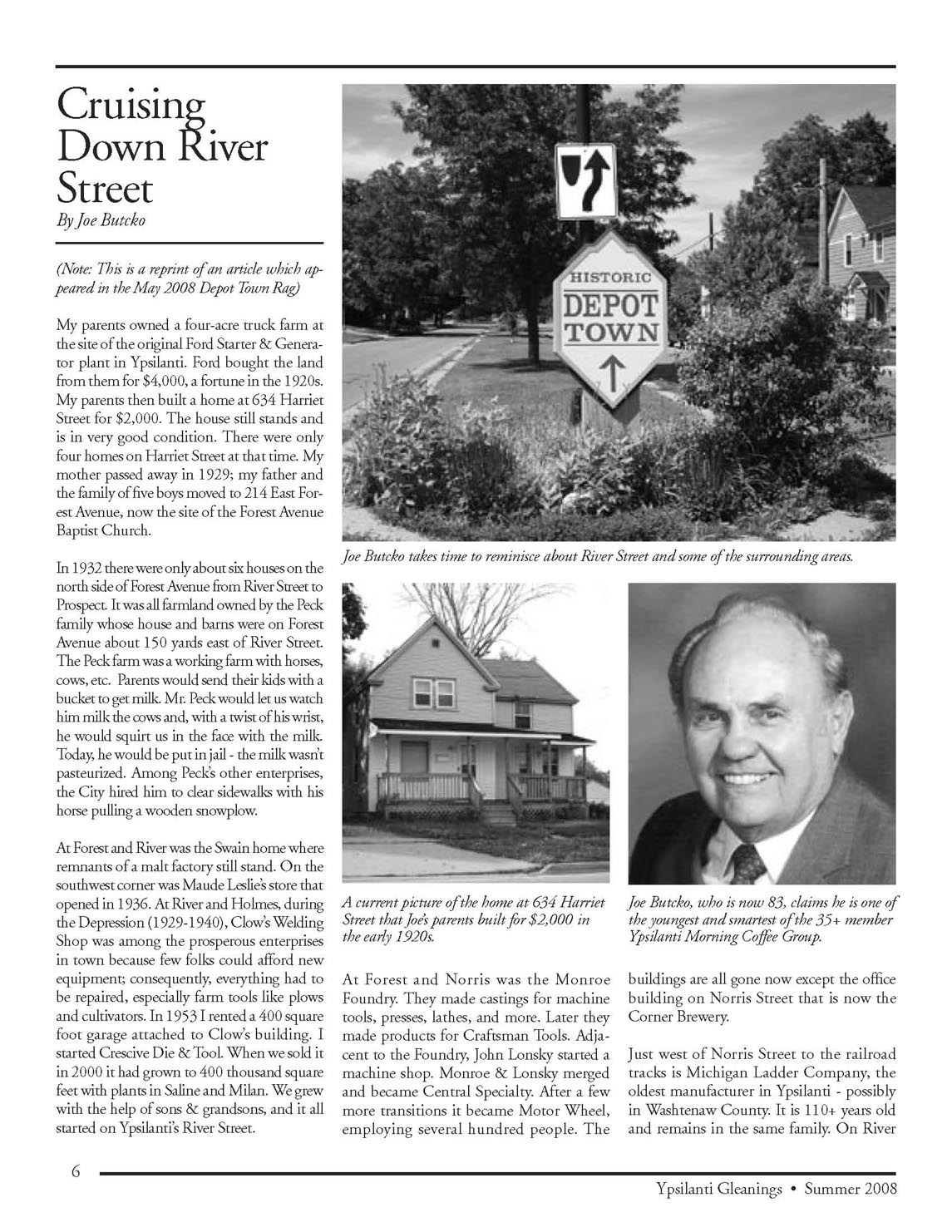 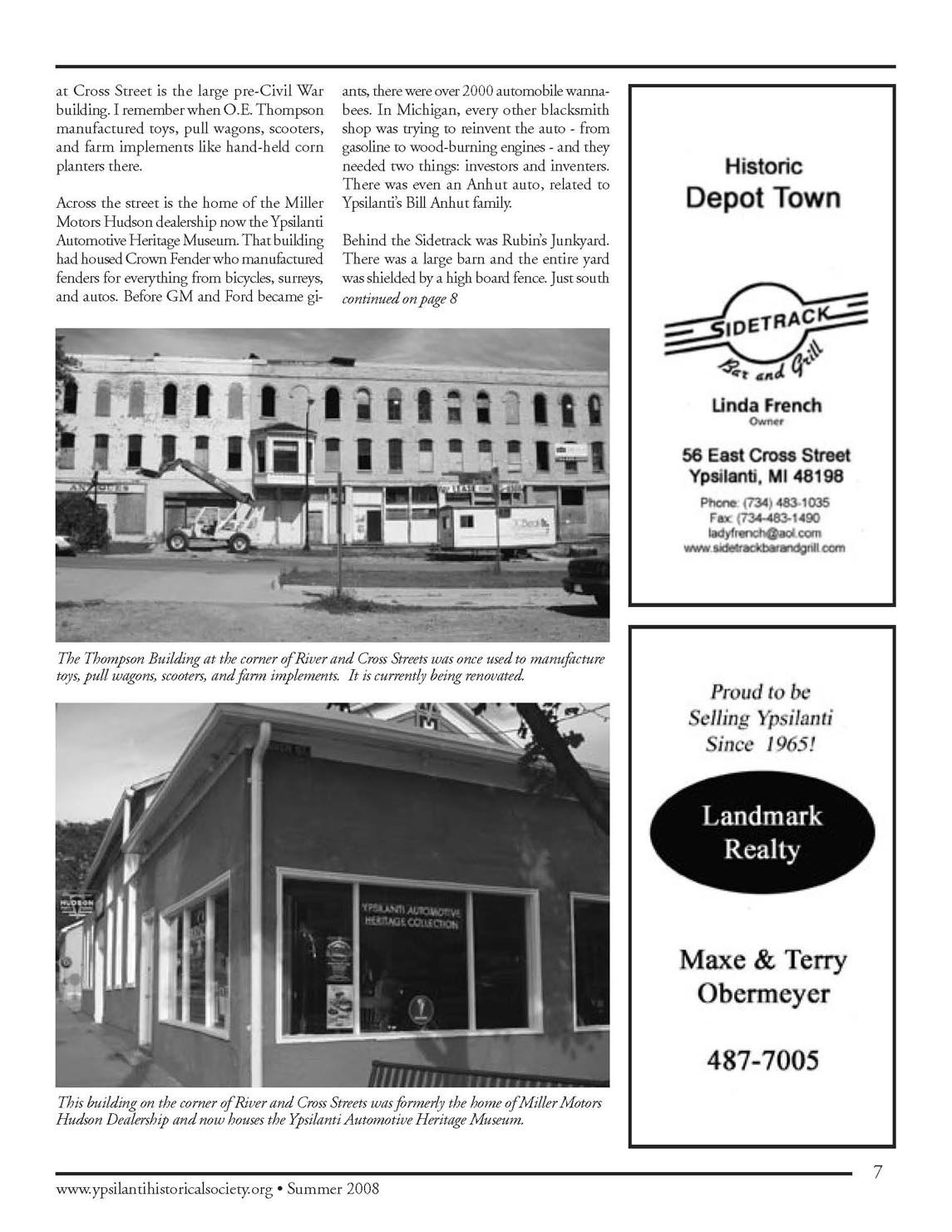 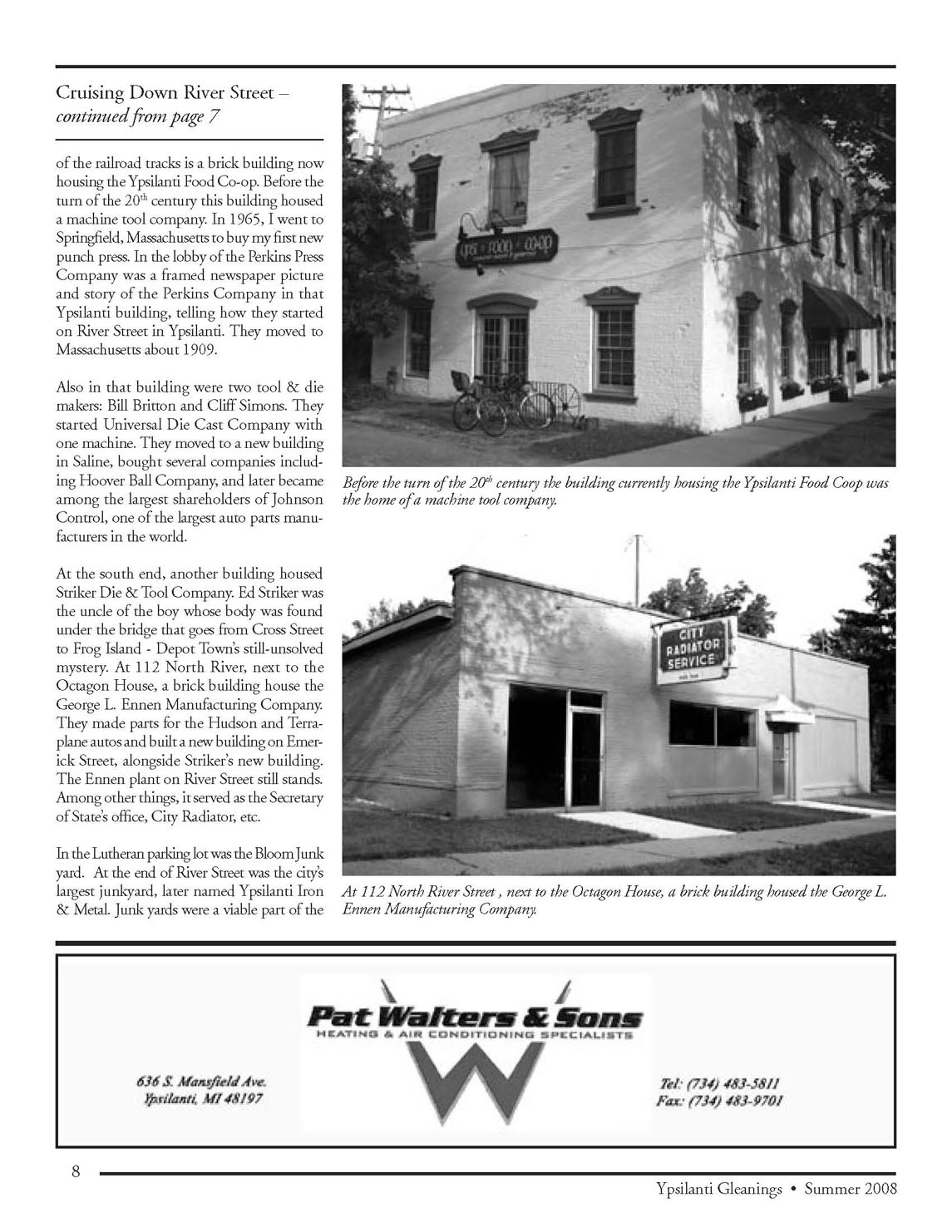 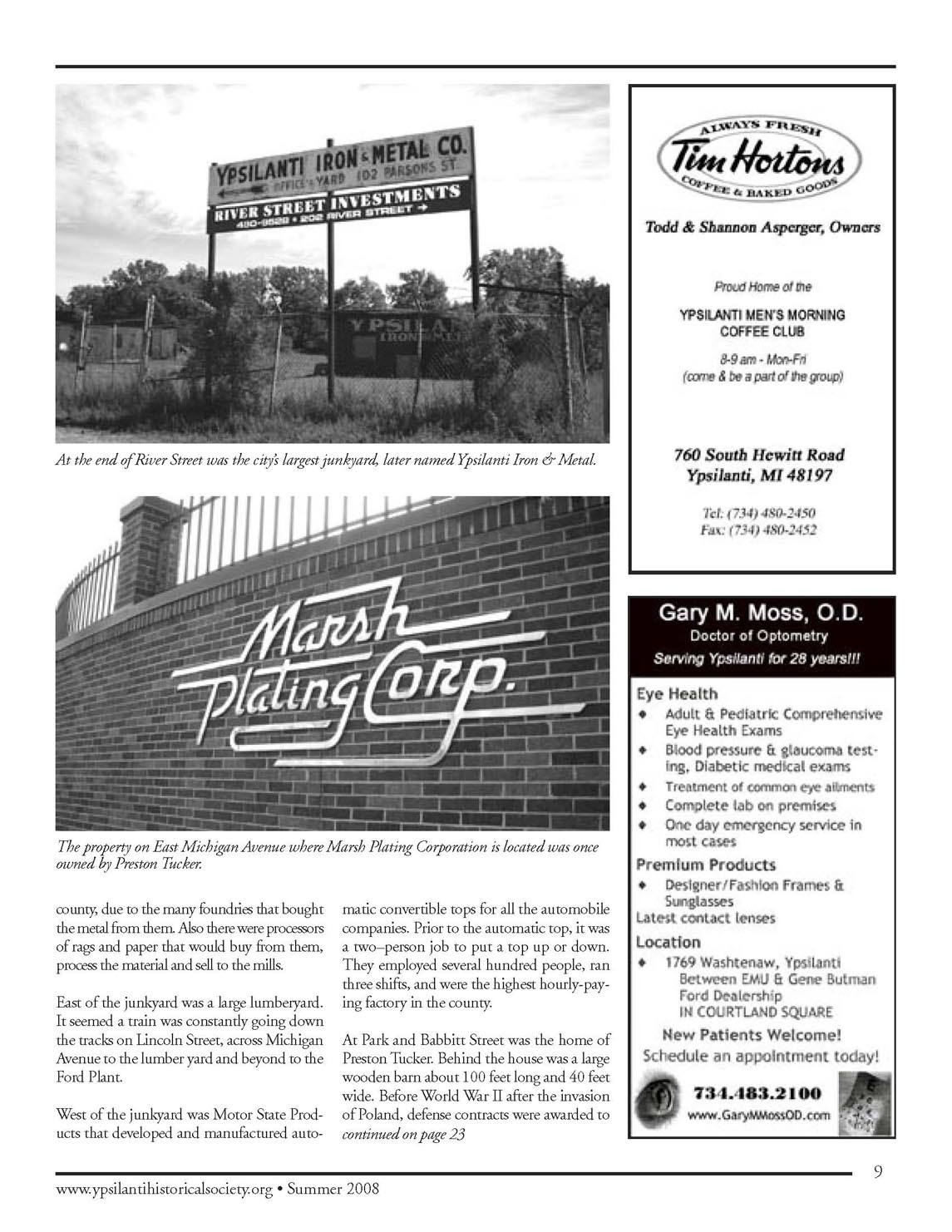 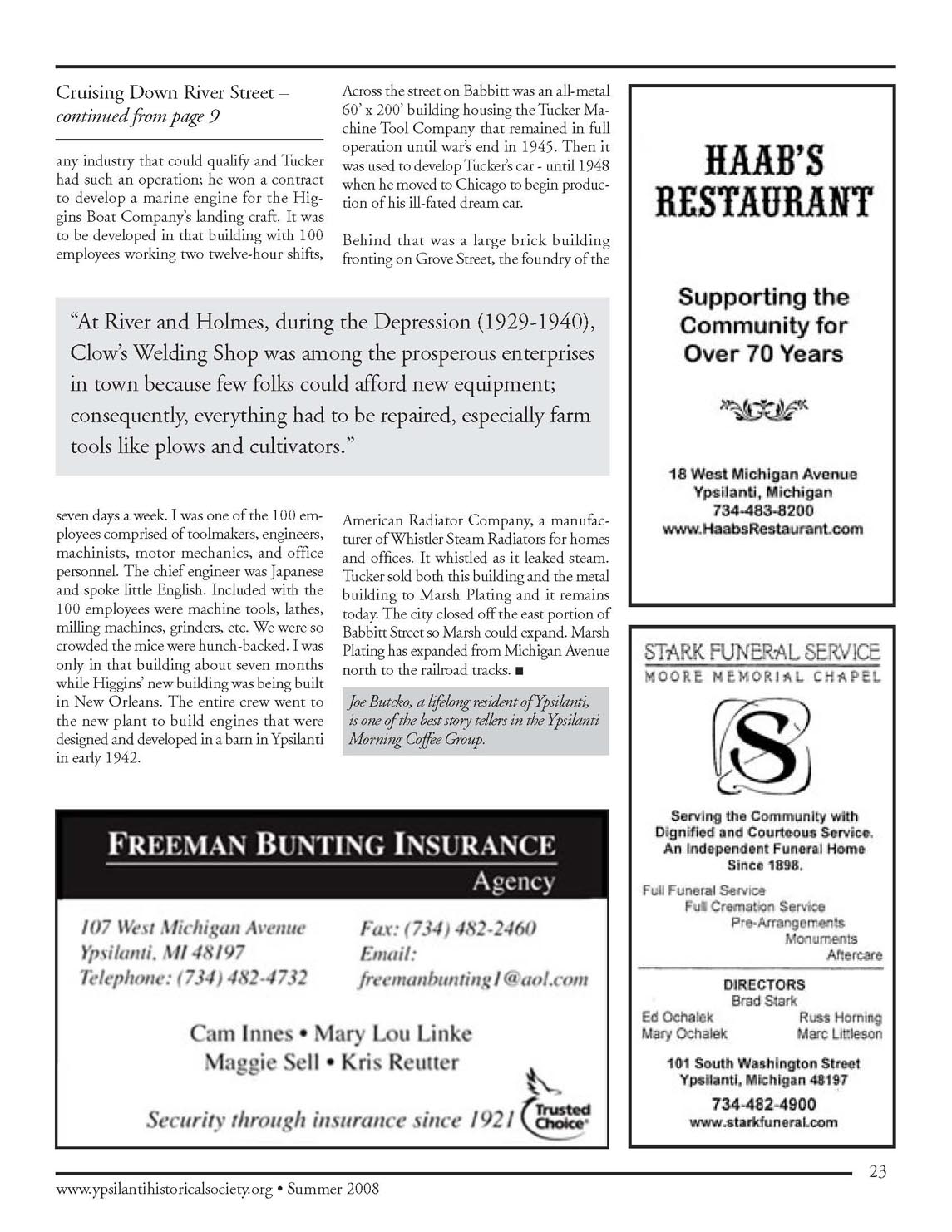 (Note: This is a reprint of an article which appeared in the May 2008 Depot Town Rag)

My parents owned a four-acre truck farm at the site of the original Ford Starter & Generator plant in Ypsilanti. Ford bought the land from them for $4,000, a fortune in the 1920s. My parents then built a home at 634 Harriet Street for $2,000. The house still stands and is in very good condition. There were only four homes on Harriet Street at that time. My mother passed away in 1929; my father and the family of five boys moved to 214 east Forest Avenue, now the site of the Forest Avenue Baptist Church.

In 1932 there were only about six houses on the north side of Forest Avenue from River Street to Prospect. It was all farmland owned by the Peck family whose house and barns were on Forest Avenue about 150 yards east of River Street. The Peck farm was a working farm with horses, cows, etc. Parents would send their kids with a bucket to get milk. Mr. Peck would let us watch him milk the cows and, with a twist of his wrist, he would squirt us in the face with the milk. Today, he would be put in jail - the milk wasn’t pasteurized. Among Peck’s other enterprises, the City hired him to clear sidewalks with his horse pulling a wooden snowplow.

At Forest and River was the Swain home where remnants of a malt factory still stand. On the southwest corner was Maude Leslie’s store that opened in 1936. At River and Holmes, during the Depression (1929-1940), Clow’s Welding Shop was among the prosperous enterprises in town because few folks could afford new equipment; consequently, everything had to be repaired, especially farm tools like plows and cultivators. In 1953 I rented a 400 square foot garage attached to Clow’s building. I started Crescive Die & Tool. When we sold it in 2000 it had grown to 400 thousand square feet with plants in Saline and Milan. We grew with the help of sons & grandsons, and it all started on Ypsilanti’s River Street.

At Forest and Norris was the Monroe Foundry. They made castings for machine tools, presses, lathes, and more. Later they made products for Craftsman Tools. Adjacent to the Foundry, John Lonsky started a machine shop. Monroe & Lonsky merged and became Central Specialty. After a few more transitions it became Motor Wheel, employing several hundred people. The buildings are all gone now except the office building on Norris Street that is now the Corner Brewery.

Just west of Norris Street to the railroad tracks is Michigan Ladder Company, the oldest manufacturer in Ypsilanti - possibly in Washtenaw County. It is 110+ years old and remains in the same family. On River at Cross Street is the large pre-Civil War building. I remember when O.E. Thompson manufactured toys, pull wagons, scooters, and farm implements like hand-held corn planters there.

Across the street is the home of the Miller Motors Hudson dealership now the Ypsilanti Automotive Heritage Museum. That building had housed Crown Fender who manufactured fenders for everything from bicycles, surreys, and autos. Before GM and Ford became giants, there were over 2000 automobile wanna-bees. In Michigan, every other blacksmith shop was trying to reinvent the auto¬¬ - from gasoline to wood-burning engines - and they needed two things: investors and inventers. There was even an Anhut auto, related to Ypsilanti’s Bill Anhut family.

Behind the Sidetrack was Rubin’s Junkyard. There was a large barn and the entire yard was shielded by a high board fence. Just south of the railroad tracks is a brick building now housing the Ypsilanti Food Co-op. Before the turn of the 20th century this building housed a machine tool company. In 1965, I went to Springfield, Massachusetts to buy my first new punch press. In the lobby of the Perkins Press Company was a framed newspaper picture and story of the Perkins Company in that Ypsilanti building, telling how they started on River Street in Ypsilanti. They moved to Massachusetts about 1909.

Also in that building were two tool & die makers: Bill Britton and Cliff Simons. They started Universal Die Cast Company with one machine. They moved to a new building in Saline, bought several companies including Hoover Ball Company, and later became among the largest shareholders of Johnson Control, one of the largest auto parts manufacturers in the world.

At the south end, another building housed Striker Die & Tool Company. Ed Striker was the uncle of the boy whose body was found under the bridge that goes from Cross Street to Frog Island - Depot Town’s still-unsolved mystery. At 112 North River, next to the Octagon House, a brick building house the George L. Ennen Manufacturing Company. They made parts for the Hudson and Terraplane autos and built a new building on Emerick Street, alongside Striker’s new building. The Ennen plant on River Street still stands. Among other things, it served as the Secretary of State’s office, City Radiator, etc.

In the Lutheran parking lot was the Bloom Junk yard. At the end of River Street was the city’s largest junkyard, later named Ypsilanti Iron & Metal. Junk yards were a viable part of the county, due to the many foundries that bought the metal from them. Also there were processors of rags and paper that would buy from them, process the material and sell to the mills.

East of the junkyard was a large lumberyard. It seemed a train was constantly going down the tracks on Lincoln Street, across Michigan Avenue to the lumber yard and beyond to the Ford Plant.

West of the junkyard was Motor State Products that developed and manufactured automatic convertible tops for all the automobile companies. Prior to the automatic top, it was a two–person job to put a top up or down. They employed several hundred people, ran three shifts, and were the highest hourly-paying factory in the county.

At Park and Babbitt Street was the home of Preston Tucker. Behind the house was a large wooden barn about 100 feet long and 40 feet wide. Before World War II after the invasion of Poland, defense contracts were awarded to any industry that could qualify and Tucker had such an operation; he won a contract to develop a marine engine for the Higgins Boat Company’s landing craft. It was to be developed in that building with 100 employees working two twelve-hour shifts, seven days a week. I was one of the 100 employees comprised of toolmakers, engineers, machinists, motor mechanics, and office personnel. The chief engineer was Japanese and spoke little English. Included with the 100 employees were machine tools, lathes, milling machines, grinders, etc. We were so crowded the mice were hunch-backed. I was only in that building about seven months while Higgins’ new building was being built in New Orleans. The entire crew went to the new plant to build engines that were designed and developed in a barn in Ypsilanti in early 1942.

Across the street on Babbitt was an all-metal 60’ x 200’ building housing the Tucker Machine Tool Company that remained in full operation until war’s end in 1945. Then it was used to develop Tucker’s car - until 1948 when he moved to Chicago to begin production of his ill-fated dream car.

Behind that was a large brick building fronting on Grove Street, the foundry of the American Radiator Company, a manufacturer of Whistler Steam Radiators for homes and offices. It whistled as it leaked steam. Tucker sold both this building and the metal building to Marsh Plating and it remains today. The city closed off the east portion of Babbitt Street so Marsh could expand. Marsh Plating has expanded from Michigan Avenue north to the railroad tracks.

(Joe Butcko, a lifelong resident of Ypsilanti, is one of the best story tellers in the Ypsilanti Morning Coffee Group.)

Photo 1: Joe Butcko takes time to reminisce about River Street and some of the surrounding areas.
Photo 2: Joe Butcko, who is now 83, claims he is one of the youngest and smartest of the 35+ member Ypsilanti Morning Coffee Group.
Photo 3: A current picture of the home at 634 Harriet Street that Joe’s parents built for $2,000 in the early 1920s.
Photo 4: The Thompson Building at the corner of River and Cross Streets was once used to manufacture toys, pull wagons, scooters, and farm implements. It is currently being renovated.
Photo 5: This building on the corner of River and Cross Streets was formerly the home of Miller Motors Hudson Dealership and now houses the Ypsilanti Automotive Heritage Museum.
Photo 6: Before the turn of the 20th century the building currently housing the Ypsilanti Food Coop was the home of a machine tool company.
Photo 7: At 112 North River Street , next to the Octagon House, a brick building housed the George L. Ennen Manufacturing Company.
Photo 8: At the end of River Street was the city’s largest junkyard, later named Ypsilanti Iron & Metal.
Photo 9: The property on East Michigan Avenue where Marsh Plating Corporation is located was once owned by Preston Tucker.