An Ypsi Kid was the Catalyst for the National Mall in Washington, D.C. 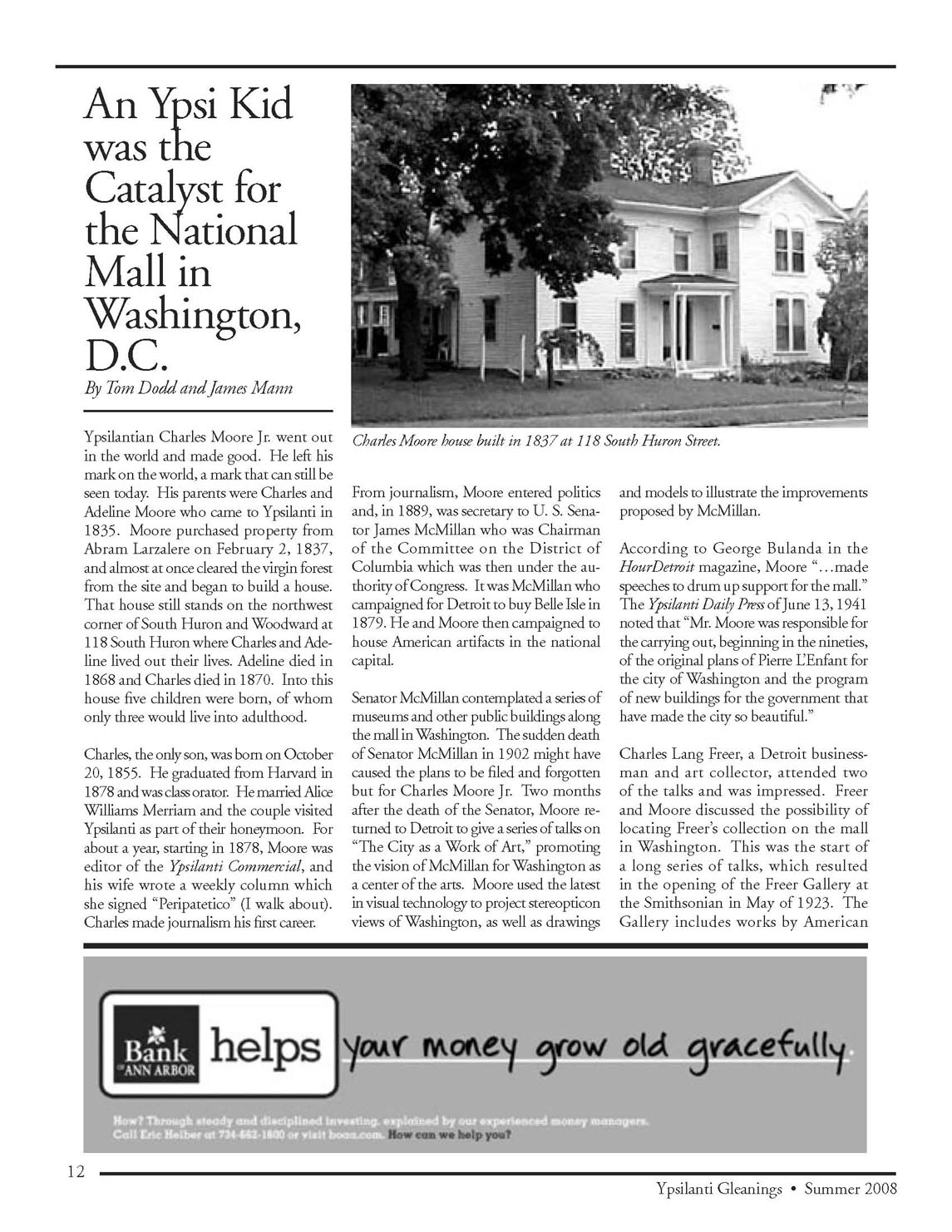 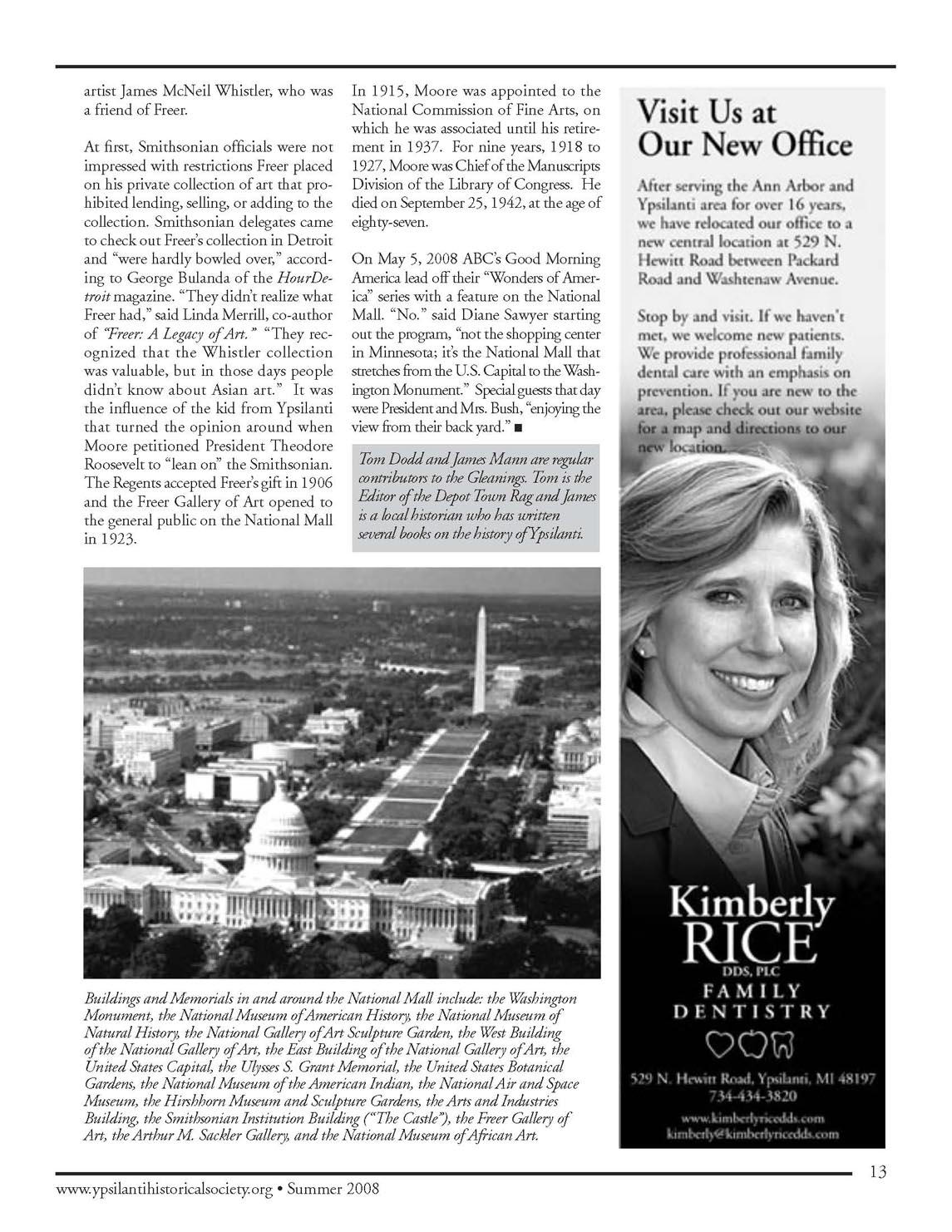 Ypsilantian Charles Moore Jr. went out in the world and made good. He left his mark on the world, a mark that can still be seen today. His parents were Charles and Adeline Moore who came to Ypsilanti in 1835. Moore purchased property from Abram Larzalere on February 2, 1837, and almost at once cleared the virgin forest from the site and began to build a house. That house still stands on the northwest corner of South Huron and Woodward at 118 South Huron where Charles and Adeline lived out their lives. Adeline died in 1868 and Charles died in 1870. Into this house five children were born, of whom only three would live into adulthood.

Charles, the only son, was born on October 20, 1855. He graduated from Harvard in 1878 and was class orator. He married Alice Williams Merriam and the couple visited Ypsilanti as part of their honeymoon. For about a year, starting in 1878, Moore was editor of the Ypsilanti Commercial, and his wife wrote a weekly column which she signed "Peripatetico" (I walk about). Charles made journalism his first career.

From journalism, Moore entered politics and, in 1889, was secretary to U. S. Senator James McMillan who was Chairman of the Committee on the District of Columbia which was then under the authority of Congress. It was McMillan who campaigned for Detroit to buy Belle Isle in 1879. He and Moore then campaigned to house American artifacts in the national capital.

Senator McMillan contemplated a series of museums and other public buildings along the mall in Washington. The sudden death of Senator McMillan in 1902 might have caused the plans to be filed and forgotten but for Charles Moore Jr. Two months after the death of the Senator, Moore returned to Detroit to give a series of talks on "The City as a Work of Art," promoting the vision of McMillan for Washington as a center of the arts. Moore used the latest in visual technology to project stereopticon views of Washington, as well as drawings and models to illustrate the improvements proposed by McMillan.

According to George Bulanda in the HourDetroit magazine, Moore “…made speeches to drum up support for the mall.” The Ypsilanti Daily Press of June 13, 1941 noted that "Mr. Moore was responsible for the carrying out, beginning in the nineties, of the original plans of Pierre L'Enfant for the city of Washington and the program of new buildings for the government that have made the city so beautiful."

Charles Lang Freer, a Detroit businessman and art collector, attended two of the talks and was impressed. Freer and Moore discussed the possibility of locating Freer's collection on the mall in Washington. This was the start of a long series of talks, which resulted in the opening of the Freer Gallery at the Smithsonian in May of 1923. The Gallery includes works by American artist James McNeil Whistler, who was a friend of Freer.

At first, Smithsonian officials were not impressed with restrictions Freer placed on his private collection of art that prohibited lending, selling, or adding to the collection. Smithsonian delegates came to check out Freer’s collection in Detroit and “were hardly bowled over,” according to George Bulanda of the HourDetroit magazine. “They didn’t realize what Freer had,” said Linda Merrill, co-author of “Freer: A Legacy of Art.” “They recognized that the Whistler collection was valuable, but in those days people didn’t know about Asian art.” It was the influence of the kid from Ypsilanti that turned the opinion around when Moore petitioned President Theodore Roosevelt to “lean on” the Smithsonian. The Regents accepted Freer’s gift in 1906 and the Freer Gallery of Art opened to the general public on the National Mall in 1923.

In 1915, Moore was appointed to the National Commission of Fine Arts, on which he was associated until his retirement in 1937. For nine years, 1918 to 1927, Moore was Chief of the Manuscripts Division of the Library of Congress. He died on September 25, 1942, at the age of eighty-seven.

On May 5, 2008 ABC’s Good Morning America lead off their “Wonders of America” series with a feature on the National Mall. “No.” said Diane Sawyer starting out the program, “not the shopping center in Minnesota; it’s the National Mall that stretches from the U.S. Capital to the Washington Monument.” Special guests that day were President and Mrs. Bush, “enjoying the view from their back yard.”

(Tom Dodd and James Mann are regular contributors to the Gleanings. Tom is the Editor of the Depot Town Rag and James is a local historian who has written several books on the history of Ypsilanti.)