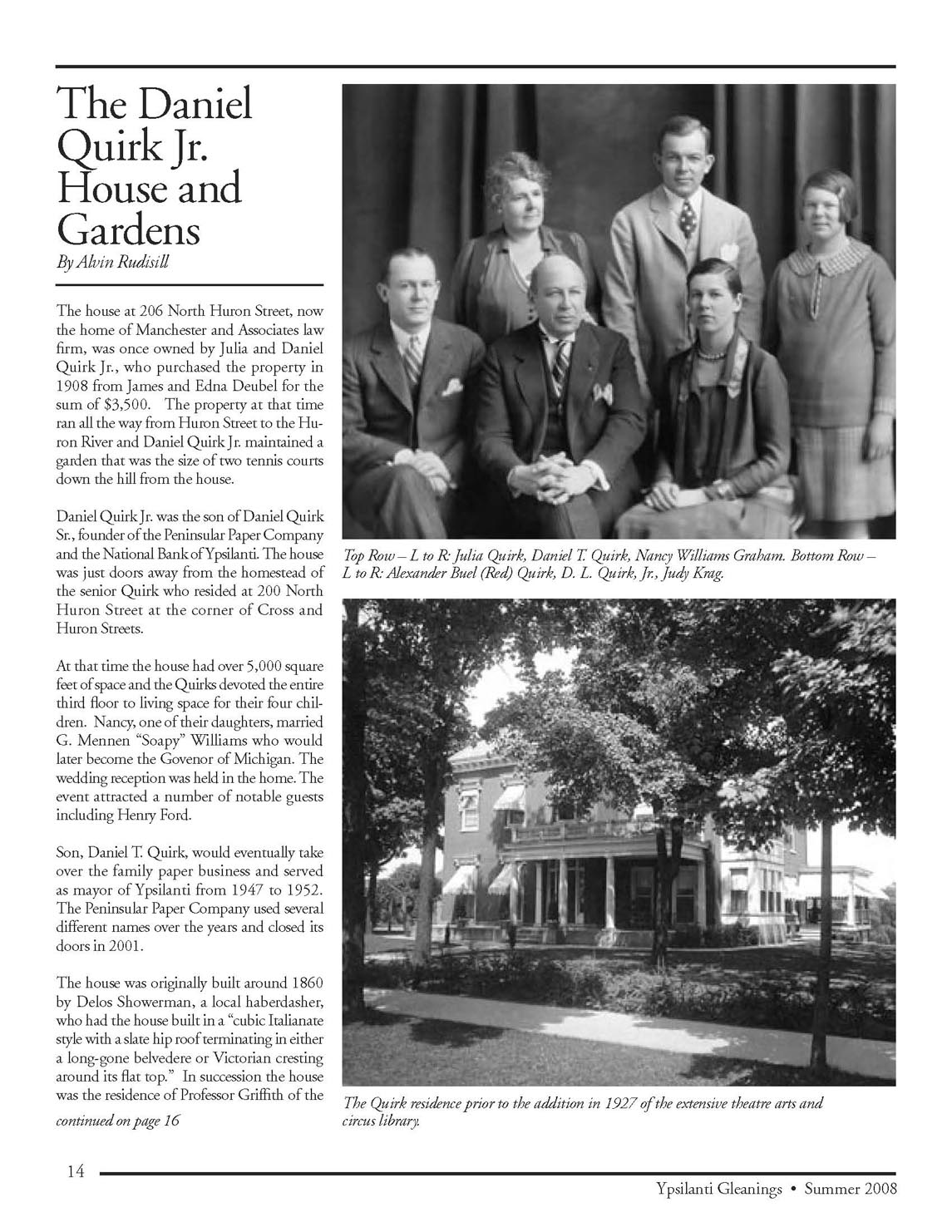 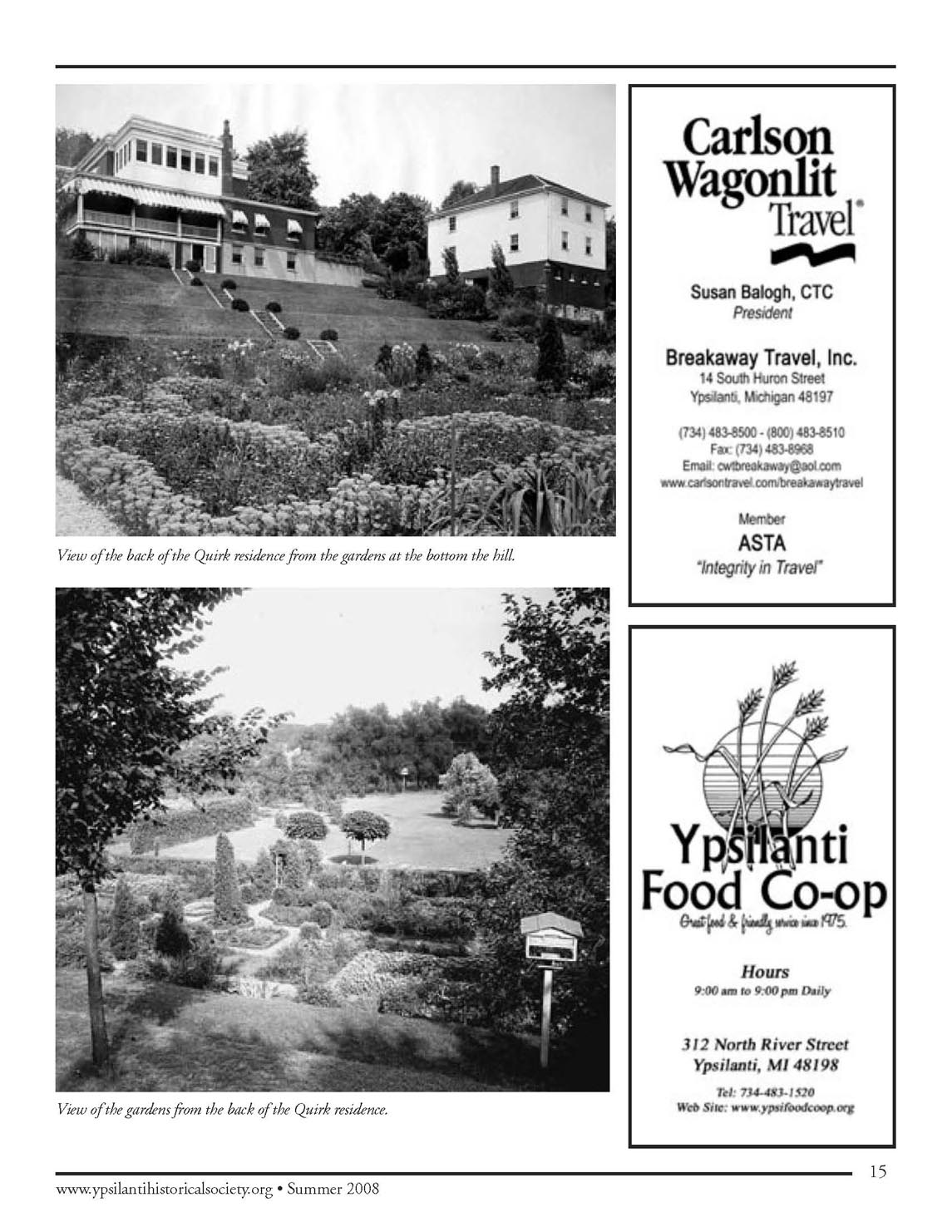 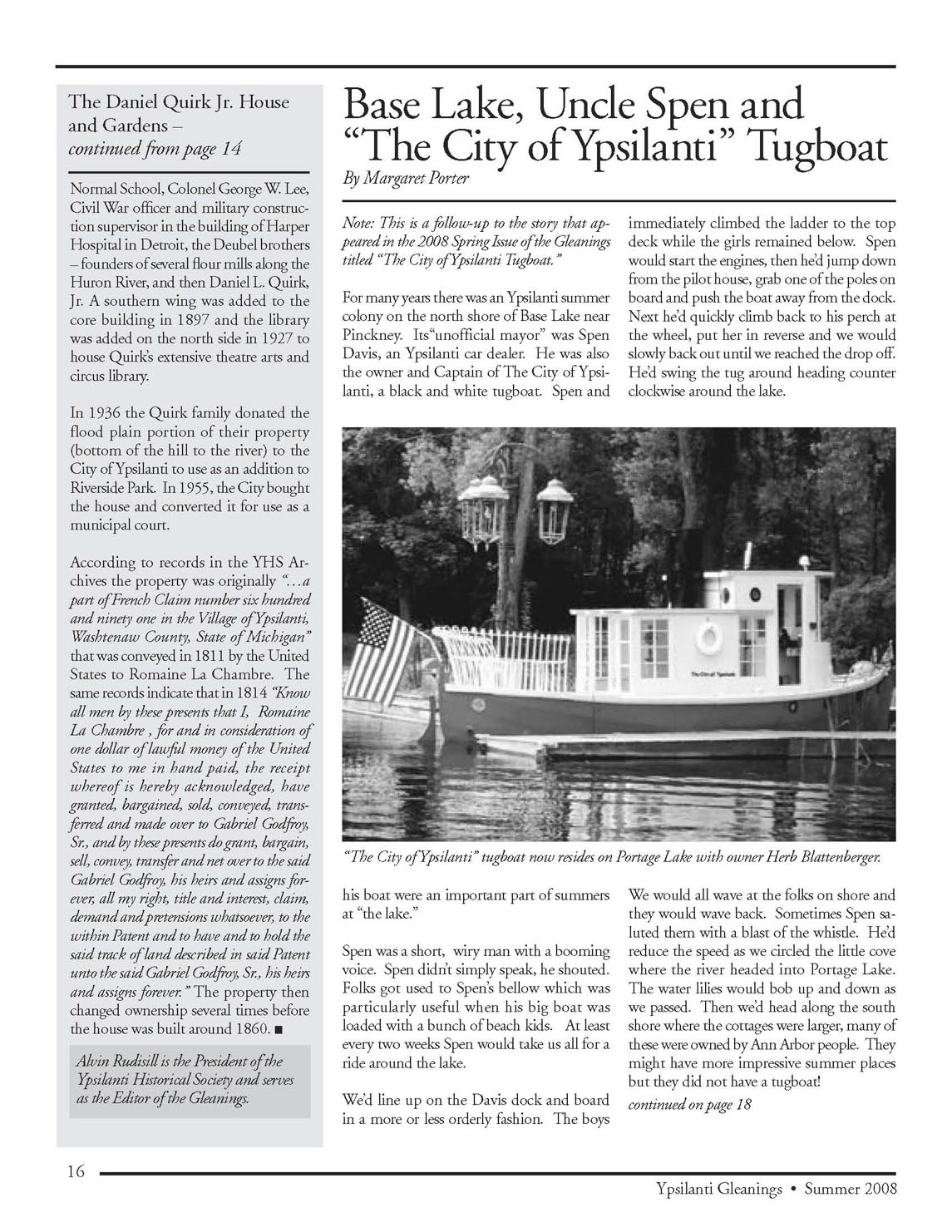 The house at 206 North Huron Street, now the home of Manchester and Associates law firm, was once owned by Julia and Daniel Quirk Jr., who purchased the property in 1908 from James and Edna Deubel for the sum of $3,500. The property at that time ran all the way from Huron Street to the Huron River and Daniel Quirk Jr. maintained a garden that was the size of two tennis courts down the hill from the house.

Daniel Quirk Jr. was the son of Daniel Quirk Sr., founder of the Peninsular Paper Company and the National Bank of Ypsilanti. The house was just doors away from the homestead of the senior Quirk who resided at 200 North Huron Street at the corner of Cross and Huron Streets.

At that time the house had over 5,000 square feet of space and the Quirks devoted the entire third floor to living space for their four children. Nancy, one of their daughters, married G. Mennen “Soapy” Williams who would later become the Govenor of Michigan. The wedding reception was held in the home. The event attracted a number of notable guests including Henry Ford.

Son, Daniel T. Quirk, would eventually take over the family paper business and served as mayor of Ypsilanti from 1947 to 1952. The Peninsular Paper Company used several different names over the years and closed its doors in 2001.

The house was originally built around 1860 by Delos Showerman, a local haberdasher, who had the house built in a “cubic Italianate style with a slate hip roof terminating in either a long-gone belvedere or Victorian cresting around its flat top.” In succession the house was the residence of Professor Griffith of the Normal School, Colonel George W. Lee, Civil War officer and military construction supervisor in the building of Harper Hospital in Detroit, the Deubel brothers – founders of several flour mills along the Huron River, and then Daniel L. Quirk, Jr. A southern wing was added to the core building in 1897 and the library was added on the north side in 1927 to house Quirk’s extensive theatre arts and circus library.

In 1936 the Quirk family donated the flood plain portion of their property (bottom of the hill to the river) to the City of Ypsilanti to use as an addition to Riverside Park. In 1955, the City bought the house and converted it for use as a municipal court.

According to records in the YHS Archives the property was originally “…a part of French Claim number six hundred and ninety one in the Village of Ypsilanti, Washtenaw County, State of Michigan” that was conveyed in 1811 by the United States to Romaine La Chambre. The same records indicate that in 1814 “Know all men by these presents that I, Romaine La Chambre , for and in consideration of one dollar of lawful money of the United States to me in hand paid, the receipt whereof is hereby acknowledged, have granted, bargained, sold, conveyed, transferred and made over to Gabriel Godfroy, Sr., and by these presents do grant, bargain, sell, convey, transfer and net over to the said Gabriel Godfroy, his heirs and assigns forever, all my right, title and interest, claim, demand and pretensions whatsoever, to the within Patent and to have and to hold the said track of land described in said Patent unto the said Gabriel Godfroy, Sr., his heirs and assigns forever.” The property then changed ownership several times before the house was built around 1860.

(Alvin Rudisill is the President of the Ypsilanti Historical Society and serves as the Editor of the Gleanings.)