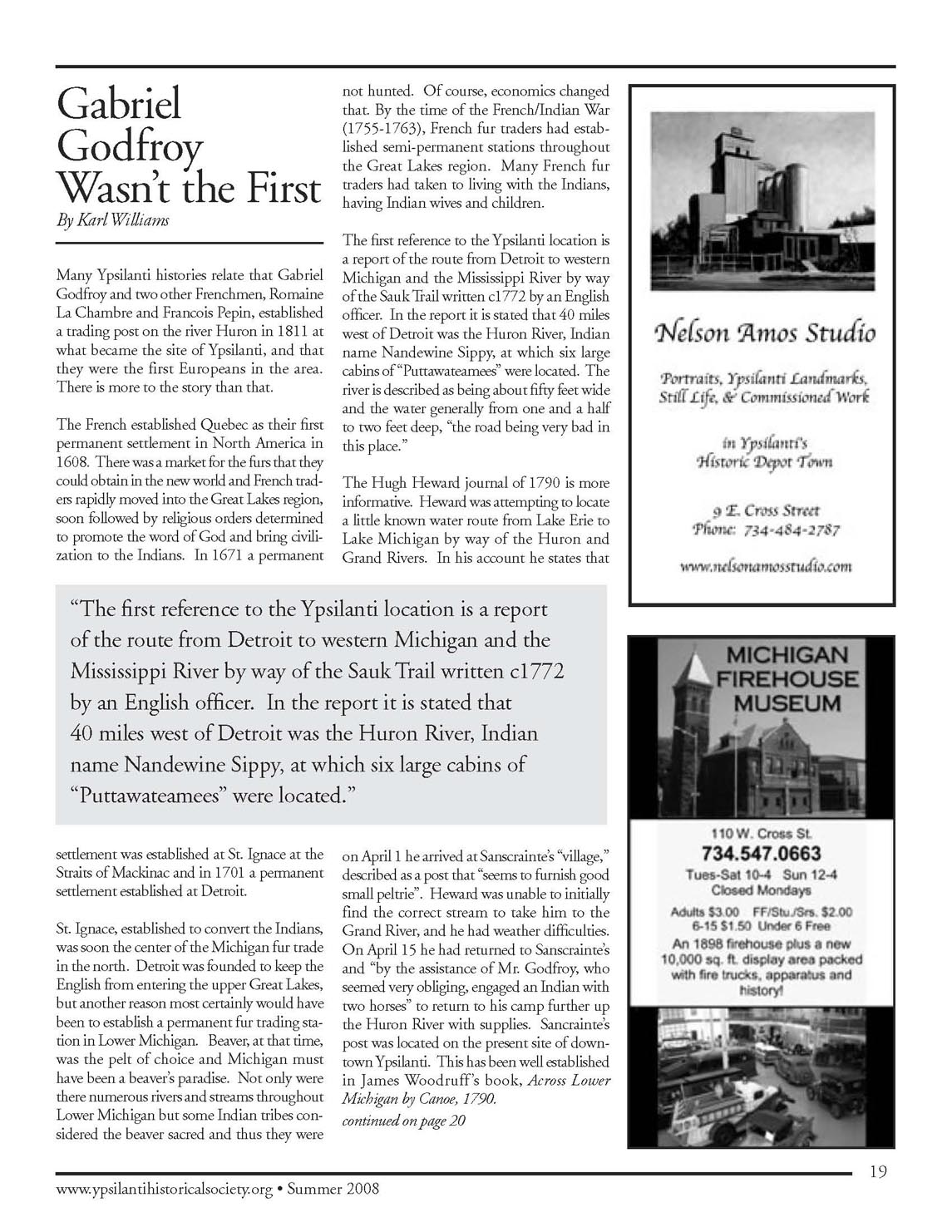 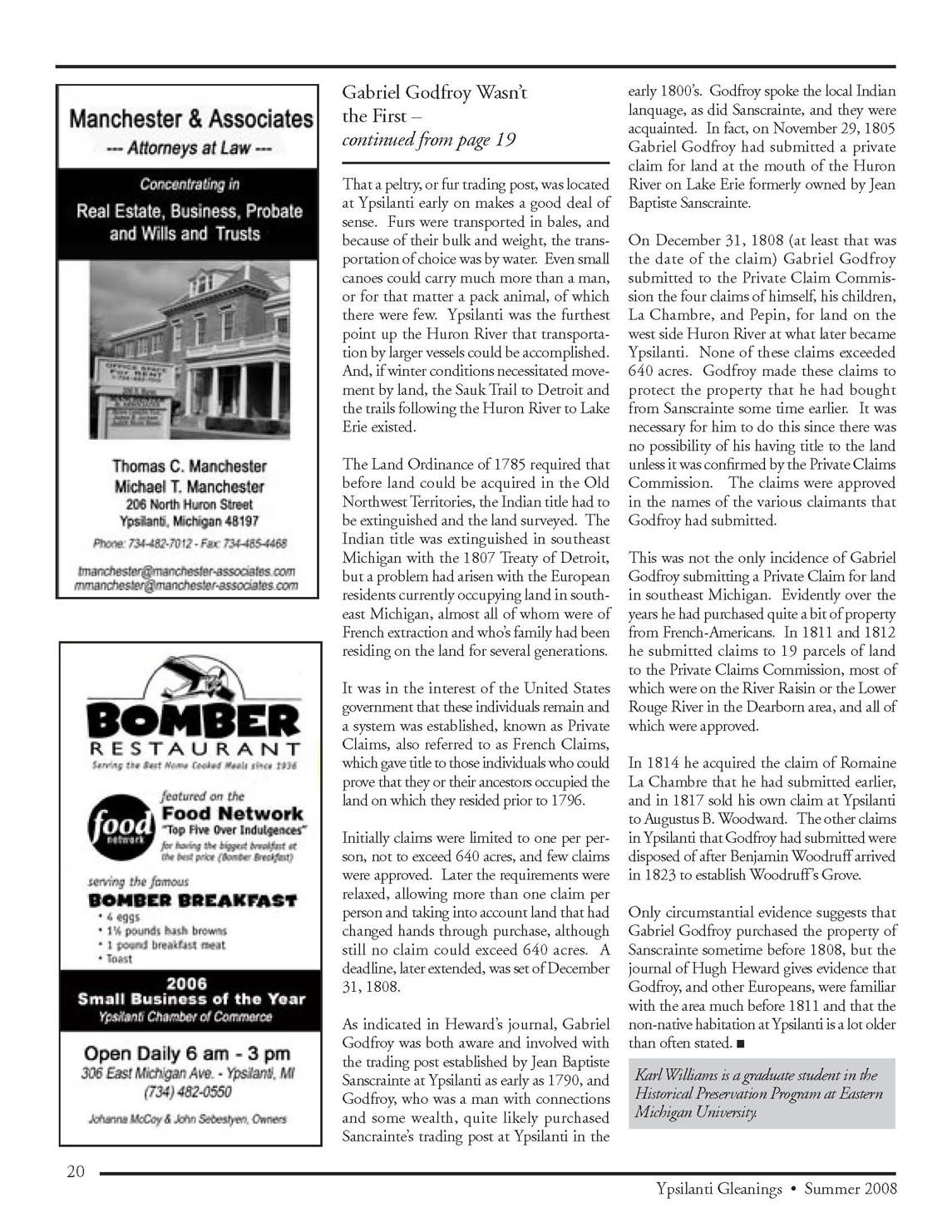 Many Ypsilanti histories relate that Gabriel Godfroy and two other Frenchmen, Romaine La Chambre and Francois Pepin, established a trading post on the river Huron in 1811 at what became the site of Ypsilanti, and that they were the first Europeans in the area. There is more to the story than that.

St. Ignace, established to convert the Indians, was soon the center of the Michigan fur trade in the north. Detroit was founded to keep the English from entering the upper Great Lakes, but another reason most certainly would have been to establish a permanent fur trading station in Lower Michigan. Beaver, at that time, was the pelt of choice and Michigan must have been a beaver's paradise. Not only were there numerous rivers and streams throughout Lower Michigan but some Indian tribes considered the beaver sacred and thus they were not hunted. Of course, economics changed that. By the time of the French/Indian War (1755-1763), French fur traders had established semi-permanent stations throughout the Great Lakes region. Many French fur traders had taken to living with the Indians, having Indian wives and children.

The first reference to the Ypsilanti location is a report of the route from Detroit to western Michigan and the Mississippi River by way of the Sauk Trail written c1772 by an English officer. In the report it is stated that 40 miles west of Detroit was the Huron River, Indian name Nandewine Sippy, at which six large cabins of "Puttawateamees" were located. The river is described as being about fifty feet wide and the water generally from one and a half to two feet deep, "the road being very bad in this place."

The Hugh Heward journal of 1790 is more informative. Heward was attempting to locate a little known water route from Lake Erie to Lake Michigan by way of the Huron and Grand Rivers. In his account he states that on April 1 he arrived at Sanscrainte's "village," described as a post that "seems to furnish good small peltrie". Heward was unable to initially find the correct stream to take him to the Grand River, and he had weather difficulties. On April 15 he had returned to Sanscrainte's and "by the assistance of Mr. Godfroy, who seemed very obliging, engaged an Indian with two horses" to return to his camp further up the Huron River with supplies. Sancrainte's post was located on the present site of downtown Ypsilanti. This has been well established in James Woodruff's book, Across Lower Michigan by Canoe, 1790.

That a peltry, or fur trading post, was located at Ypsilanti early on makes a good deal of sense. Furs were transported in bales, and because of their bulk and weight, the transportation of choice was by water. Even small canoes could carry much more than a man, or for that matter a pack animal, of which there were few. Ypsilanti was the furthest point up the Huron River that transportation by larger vessels could be accomplished. And, if winter conditions necessitated movement by land, the Sauk Trail to Detroit and the trails following the Huron River to Lake Erie existed.

The Land Ordinance of 1785 required that before land could be acquired in the Old Northwest Territories, the Indian title had to be extinguished and the land surveyed. The Indian title was extinguished in southeast Michigan with the 1807 Treaty of Detroit, but a problem had arisen with the European residents currently occupying land in southeast Michigan, almost all of whom were of French extraction and who's family had been residing on the land for several generations.

It was in the interest of the United States government that these individuals remain and a system was established, known as Private Claims, also referred to as French Claims, which gave title to those individuals who could prove that they or their ancestors occupied the land on which they resided prior to 1796.

Initially claims were limited to one per person, not to exceed 640 acres, and few claims were approved. Later the requirements were relaxed, allowing more than one claim per person and taking into account land that had changed hands through purchase, although still no claim could exceed 640 acres. A deadline, later extended, was set of December 31, 1808.

As indicated in Heward's journal, Gabriel Godfroy was both aware and involved with the trading post established by Jean Baptiste Sanscrainte at Ypsilanti as early as 1790, and Godfroy, who was a man with connections and some wealth, quite likely purchased Sancrainte's trading post at Ypsilanti in the early 1800's. Godfroy spoke the local Indian lanquage, as did Sanscrainte, and they were acquainted. In fact, on November 29, 1805 Gabriel Godfroy had submitted a private claim for land at the mouth of the Huron River on Lake Erie formerly owned by Jean Baptiste Sanscrainte.

On December 31, 1808 (at least that was the date of the claim) Gabriel Godfroy submitted to the Private Claim Commission the four claims of himself, his children, La Chambre, and Pepin, for land on the west side Huron River at what later became Ypsilanti. None of these claims exceeded 640 acres. Godfroy made these claims to protect the property that he had bought from Sanscrainte some time earlier. It was necessary for him to do this since there was no possibility of his having title to the land unless it was confirmed by the Private Claims Commission. The claims were approved in the names of the various claimants that Godfroy had submitted.

This was not the only incidence of Gabriel Godfroy submitting a Private Claim for land in southeast Michigan. Evidently over the years he had purchased quite a bit of property from French-Americans. In 1811 and 1812 he submitted claims to 19 parcels of land to the Private Claims Commission, most of which were on the River Raisin or the Lower Rouge River in the Dearborn area, and all of which were approved.

In 1814 he acquired the claim of Romaine La Chambre that he had submitted earlier, and in 1817 sold his own claim at Ypsilanti to Augustus B. Woodward. The other claims in Ypsilanti that Godfroy had submitted were disposed of after Benjamin Woodruff arrived in 1823 to establish Woodruff's Grove.

Only circumstantial evidence suggests that Gabriel Godfroy purchased the property of Sanscrainte sometime before 1808, but the journal of Hugh Heward gives evidence that Godfroy, and other Europeans, were familiar with the area much before 1811 and that the non-native habitation at Ypsilanti is a lot older than often stated.

(Karl Williams is a graduate student in the Historical Preservation Program at Eastern Michigan University.)