Gone, but Not Forgotten 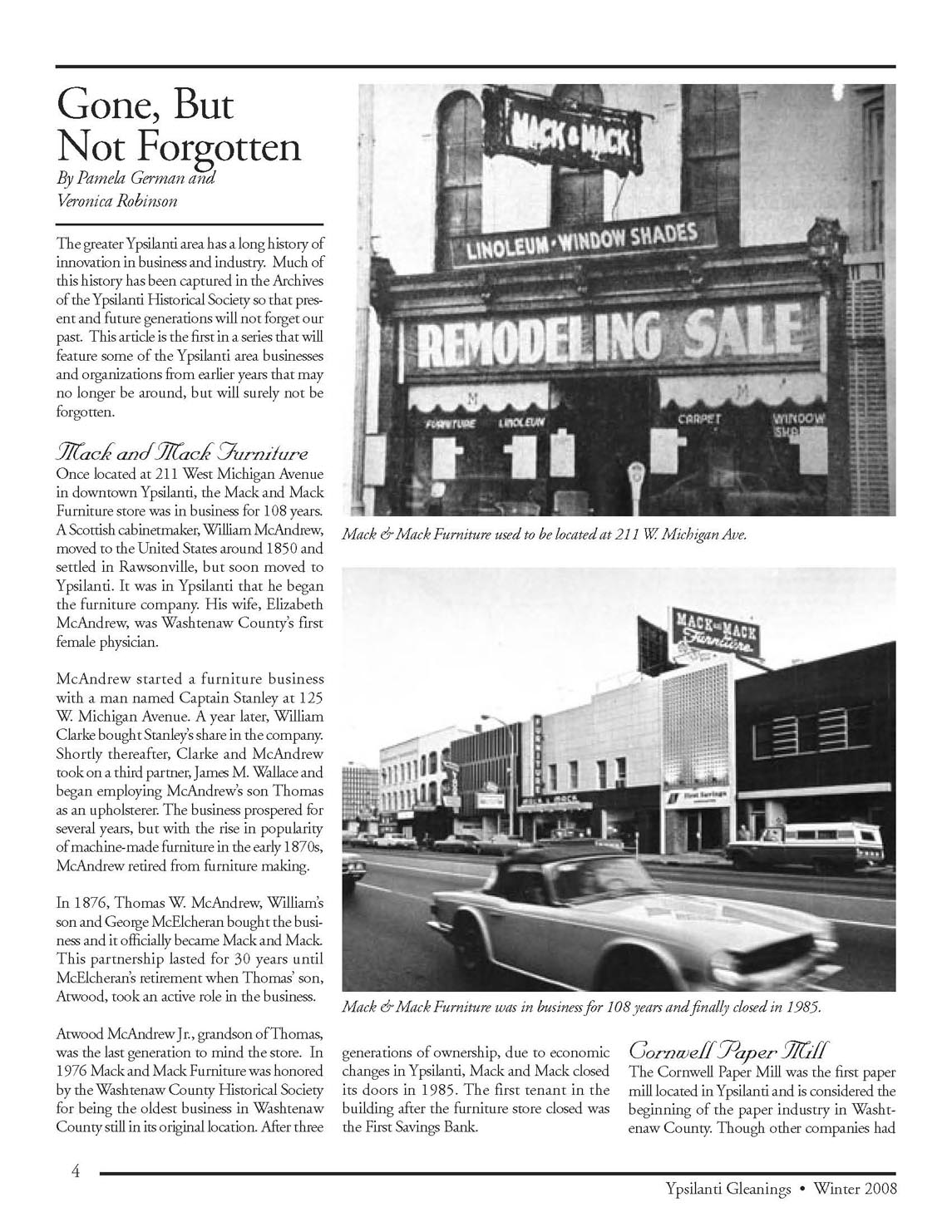 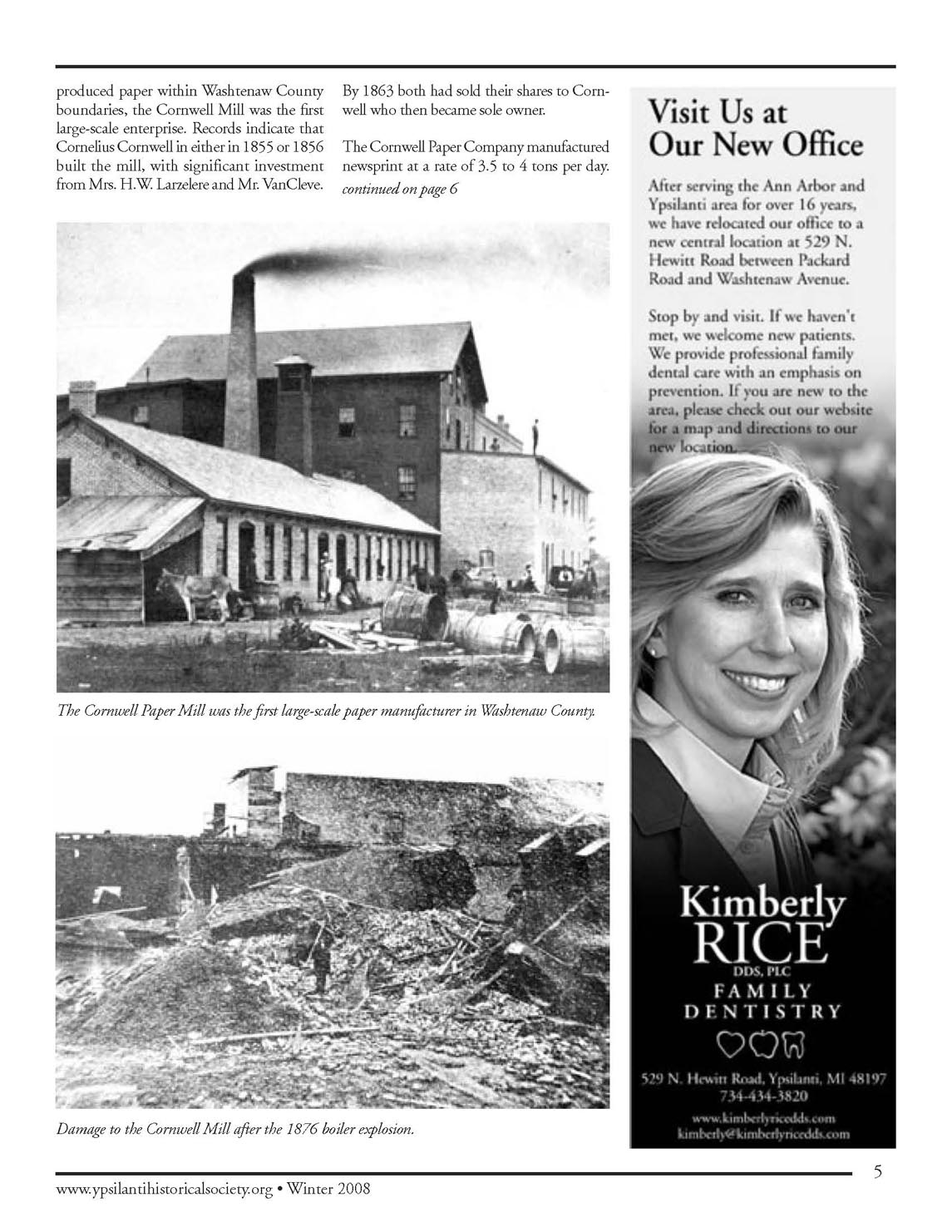 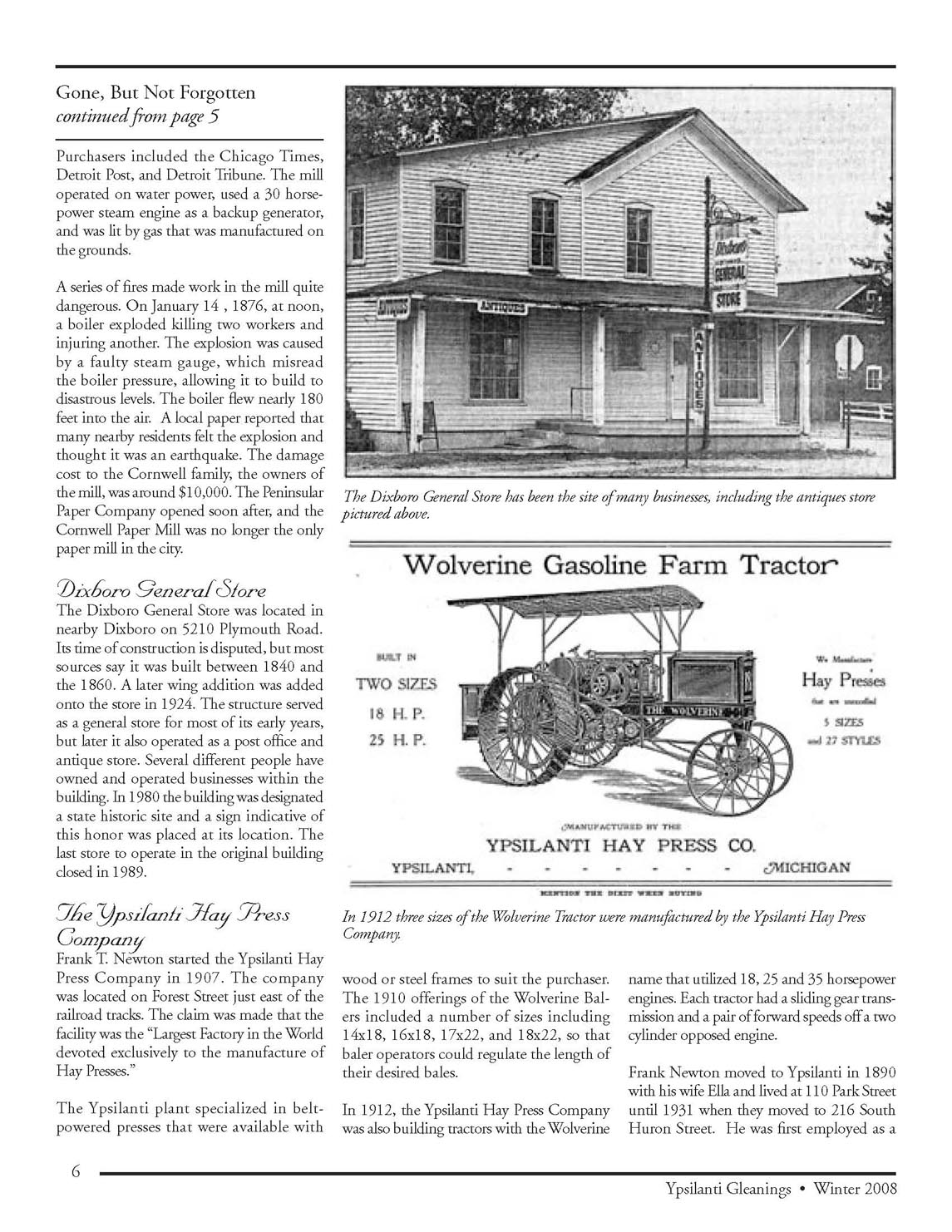 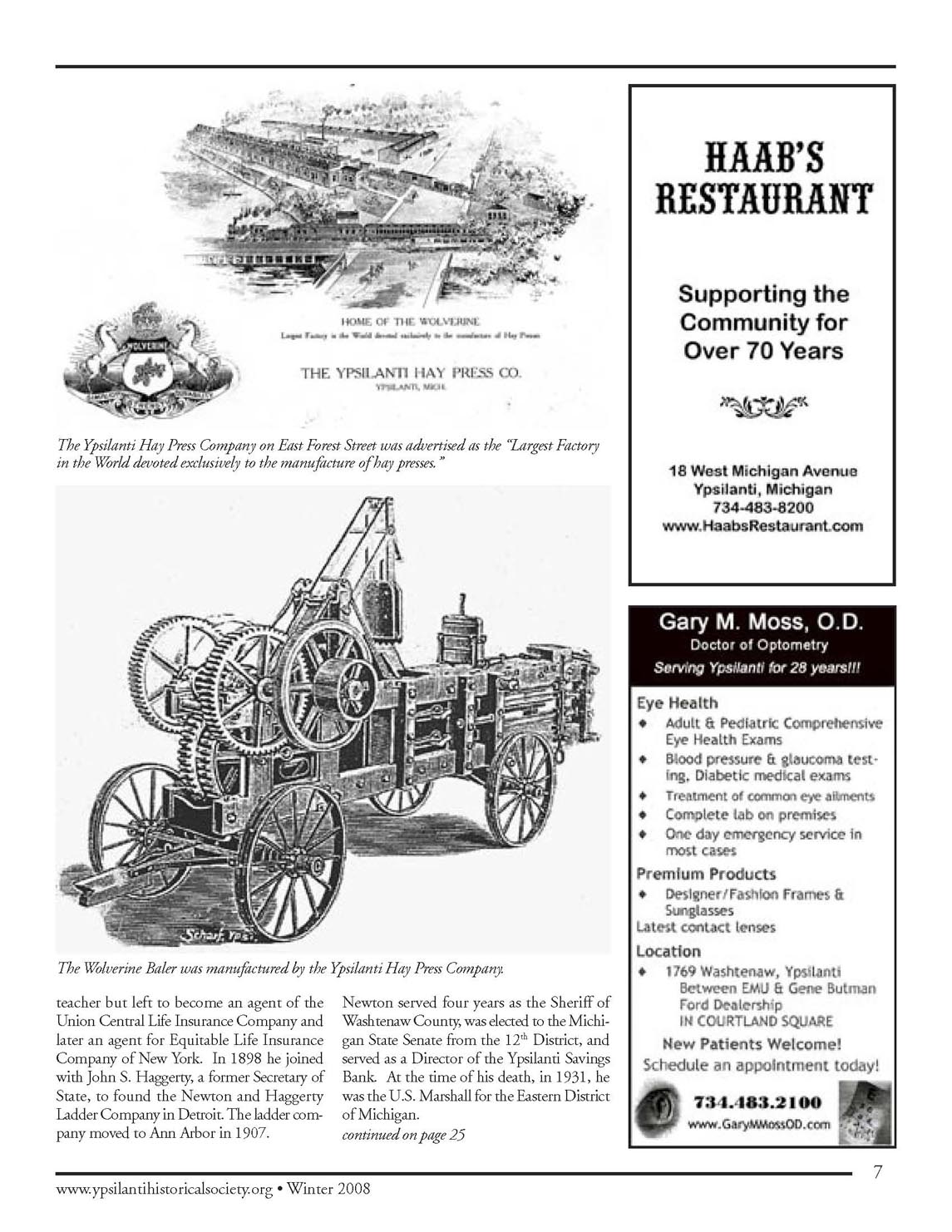 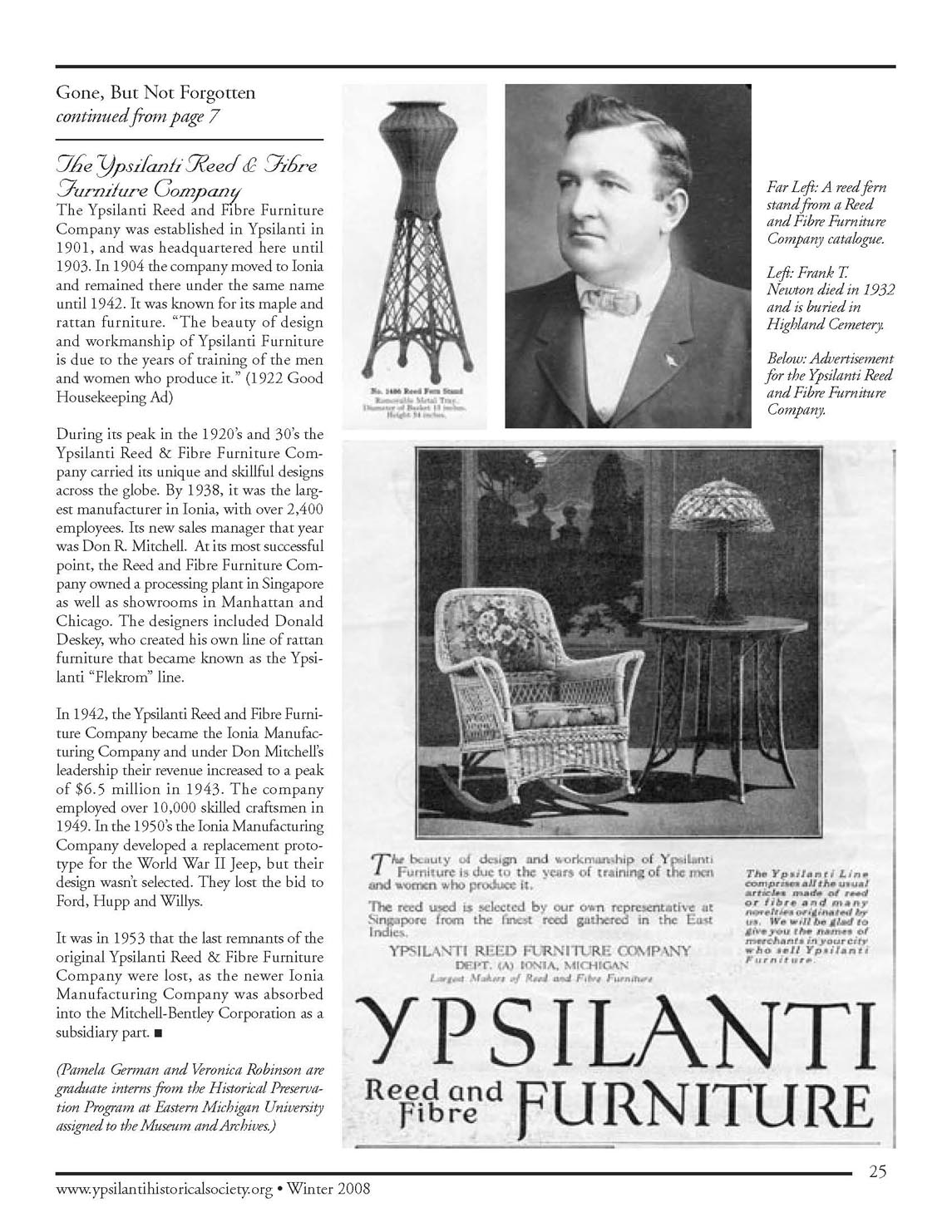 The greater Ypsilanti area has a long history of innovation in business and industry. Much of this history has been captured in the Archives of the Ypsilanti Historical Society so that present and future generations will not forget our past. This article is the first in a series that will feature some of the Ypsilanti area businesses and organizations from earlier years that may no longer be around, but will surely not be forgotten.

Mack and Mack Furniture: Once located at 211 West Michigan Avenue in downtown Ypsilanti, the Mack and Mack Furniture store was in business for 108 years. A Scottish cabinetmaker, William McAndrew, moved to the United States around 1850 and settled in Rawsonville, but soon moved to Ypsilanti. It was in Ypsilanti that he began the furniture company. His wife, Elizabeth McAndrew, was Washtenaw County’s first female physician.

McAndrew started a furniture business with a man named Captain Stanley at 125 W. Michigan Avenue. A year later, William Clarke bought Stanley’s share in the company. Shortly thereafter, Clarke and McAndrew took on a third partner, James M. Wallace and began employing McAndrew’s son Thomas as an upholsterer. The business prospered for several years, but with the rise in popularity of machine-made furniture in the early 1870s, McAndrew retired from furniture making.

In 1876, Thomas W. McAndrew, William’s son and George McElcheran bought the business and it officially became Mack and Mack. This partnership lasted for 30 years until McElcheran’s retirement when Thomas’ son, Atwood, took an active role in the business.

Atwood McAndrew Jr., grandson of Thomas, was the last generation to mind the store. In 1976 Mack and Mack Furniture was honored by the Washtenaw County Historical Society for being the oldest business in Washtenaw County still in its original location. After three generations of ownership, due to economic changes in Ypsilanti, Mack and Mack closed its doors in 1985. The first tenant in the building after the furniture store closed was the First Savings Bank.

Cornwell Paper Mill: The Cornwell Paper Mill was the first paper mill located in Ypsilanti and is considered the beginning of the paper industry in Washtenaw County. Though other companies had produced paper within Washtenaw County boundaries, the Cornwell Mill was the first large-scale enterprise. Records indicate that Cornelius Cornwell in either in 1855 or 1856 built the mill, with significant investment from Mrs. H.W. Larzelere and Mr. VanCleve. By 1863 both had sold their shares to Cornwell who then became sole owner.

The Cornwell Paper Company manufactured newsprint at a rate of 3.5 to 4 tons per day. Purchasers included the Chicago Times, Detroit Post, and Detroit Tribune. The mill operated on water power, used a 30 horsepower steam engine as a backup generator, and was lit by gas that was manufactured on the grounds.

A series of fires made work in the mill quite dangerous. On January 14, 1876, at noon, a boiler exploded killing two workers and injuring another. The explosion was caused by a faulty steam gauge, which misread the boiler pressure, allowing it to build to disastrous levels. The boiler flew nearly 180 feet into the air. A local paper reported that many nearby residents felt the explosion and thought it was an earthquake. The damage cost to the Cornwell family, the owners of the mill, was around $10,000. The Peninsular Paper Company opened soon after, and the Cornwell Paper Mill was no longer the only paper mill in the city.

Dixboro General Store: The Dixboro General Store was located in nearby Dixboro on 5210 Plymouth Road. Its time of construction is disputed, but most sources say it was built between 1840 and the 1860. A later wing addition was added onto the store in 1924. The structure served as a general store for most of its early years, but later it also operated as a post office and antique store. Several different people have owned and operated businesses within the building. In 1980 the building was designated a state historic site and a sign indicative of this honor was placed at its location. The last store to operate in the original building closed in 1989.

The Ypsilanti plant specialized in belt-powered presses that were available with wood or steel frames to suit the purchaser. The 1910 offerings of the Wolverine Balers included a number of sizes including 14x18, 16x18, 17x22, and 18x22, so that baler operators could regulate the length of their desired bales.

In 1912, the Ypsilanti Hay Press Company was also building tractors with the Wolverine name that utilized 18, 25 and 35 horsepower engines. Each tractor had a sliding gear transmission and a pair of forward speeds off a two cylinder opposed engine.

Frank Newton moved to Ypsilanti in 1890 with his wife Ella and lived at 110 Park Street until 1931 when they moved to 216 South Huron Street. He was first employed as a teacher but left to become an agent of the Union Central Life Insurance Company and later an agent for Equitable Life Insurance Company of New York. In 1898 he joined with John S. Haggerty, a former Secretary of State, to found the Newton and Haggerty Ladder Company in Detroit. The ladder company moved to Ann Arbor in 1907.

Newton served four years as the Sheriff of Washtenaw County, was elected to the Michigan State Senate from the 12th District, and served as a Director of the Ypsilanti Savings Bank. At the time of his death, in 1931, he was the U.S. Marshall for the Eastern District of Michigan.

During its peak in the 1920’s and 30’s the Ypsilanti Reed & Fibre Furniture Company carried its unique and skillful designs across the globe. By 1938, it was the largest manufacturer in Ionia, with over 2,400 employees. Its new sales manager that year was Don R. Mitchell. At its most successful point, the Reed and Fibre Furniture Company owned a processing plant in Singapore as well as showrooms in Manhattan and Chicago. The designers included Donald Deskey, who created his own line of rattan furniture that became known as the Ypsilanti “Flekrom” line.

In 1942, the Ypsilanti Reed and Fibre Furniture Company became the Ionia Manufacturing Company and under Don Mitchell’s leadership their revenue increased to a peak of $6.5 million in 1943. The company employed over 10,000 skilled craftsmen in 1949. In the 1950’s the Ionia Manufacturing Company developed a replacement prototype for the World War II Jeep, but their design wasn’t selected. They lost the bid to Ford, Hupp and Willys.

It was in 1953 that the last remnants of the original Ypsilanti Reed & Fibre Furniture Company was lost, as the newer Ionia Manufacturing Company was absorbed into the Mitchell-Bentley Corporation as a subsidiary part.

(Pamela German and Veronica Robinson are graduate interns from the Historical Preservation Program at Eastern Michigan University assigned to the Museum and Archives.)

Photo 1: Mack & Mack Furniture used to be located at 211 W. Michigan Ave.
Photo 2: Mack & Mack Furniture was in business for 108 and finally closed in 1985.
Photo 3: The Cornwell Paper Mill was the first large-scale paper manufacturer in Washtenaw County.
Photo 4: Damage to the Cornwell Mill after the 1876 boiler explosion.
Photo 5: The Dixboro General Store has been the site of many businesses, including the antiques store pictured above.
Photo 6: The Wolverine Baler was manufactured by the Ypsilanti Hay Press Company.
Photo 7: The Ypsilanti Hay Press Company on East Forest Street was advertised as the “Largest Factory in the World devoted exclusively to the manufacture of hay presses.”
Photo 8: In 1912 three sizes of the Wolverine Tractor were manufactured by the Ypsilanti Hay Press Company.
Photo 9: Frank T. Newton died in 1932 and is buried in Highland Cemetery.
Photo 10: Advertisement for the Ypsilanti Reed and Fibre Furniture Company.
Photo 11: A reed fern stand from a Reed and Fibre Furniture Company catalogue.