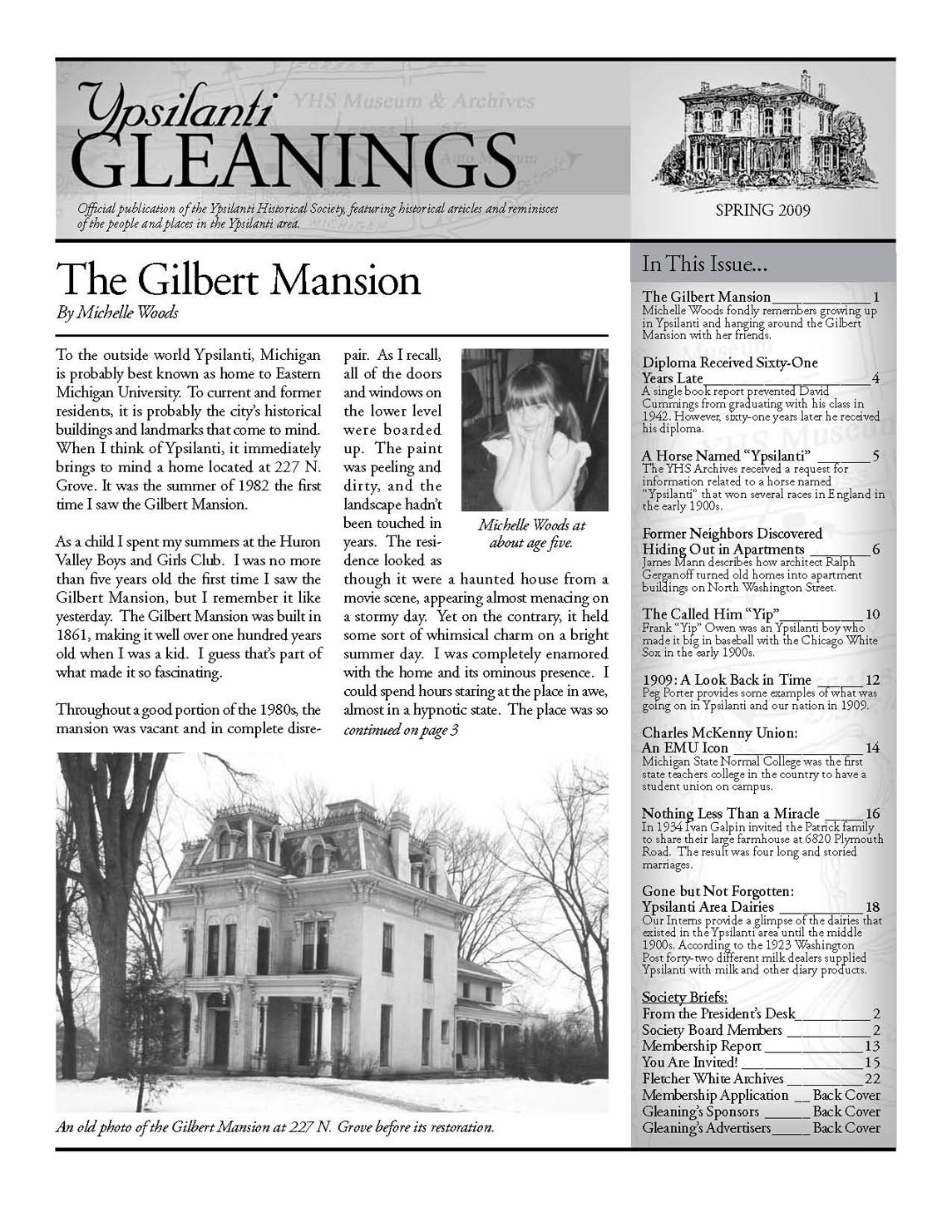 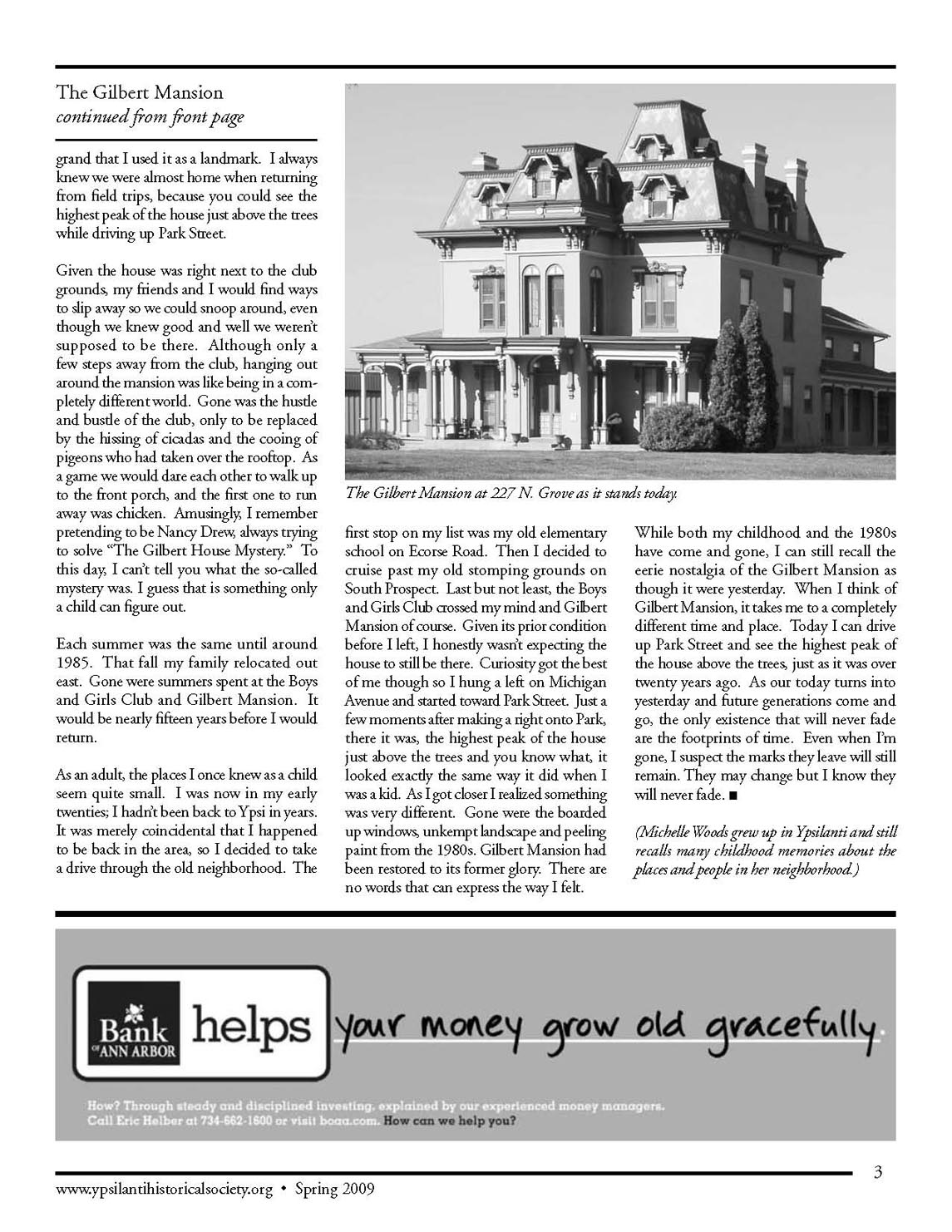 To the outside world Ypsilanti, Michigan is probably best known as home to Eastern Michigan University. To current and former residents, it is probably the city’s historical buildings and landmarks that come to mind. When I think of Ypsilanti, it immediately brings to mind a home located at 227 N. Grove. It was the summer of 1982 the first time I saw the Gilbert Mansion.

As a child I spent my summers at the Huron Valley Boys and Girls Club. I was no more than five years old the first time I saw the Gilbert Mansion, but I remember it like yesterday. The Gilbert Mansion was built 1861, making it well over one hundred years old when I was a kid. I guess that’s part of what made it so fascinating.

Throughout a good portion of the 1980s, the mansion was vacant and in complete disrepair. As I recall, all of the doors and windows on the lower level were boarded up. The paint was peeling and dirty, and the landscape hadn’t been touched in years. The residence looked as though it were a haunted house from a movie scene, appearing almost menacing on a stormy day. Yet on the contrary, it held some sort of whimsical charm on a bright summer day. I was completely enamored with the home and its ominous presence. I could spend hours staring at the place in awe, almost in a hypnotic state. The place was so grand that I used it as a landmark. I always knew we were almost home when returning from field trips, because you could see the highest peak of the house just above the trees while driving up Park Street.

Given the house was right next to the club grounds, my friends and I would find ways to slip away so we could snoop around, even though we knew good and well we weren’t supposed to be there. Although only a few steps away from the club, hanging out around the mansion was like being in a completely different world. Gone was the hustle and bustle of the club, only to be replaced by the hissing of cicadas and the cooing of pigeons who had taken over the rooftop. As a game we would dare each other to walk up to the front porch, and the first one to run away was chicken. Amusingly, I remember pretending to be Nancy Drew, always trying to solve “The Gilbert House Mystery.” To this day, I can’t tell you when the so-called mystery was. I guess that is something only a child can figure out.

Each summer was the same until around 1985. That fall my family relocated out east. Gone were summers spent at the Boys and Girls Club and Gilbert Mansion. It would be nearly fifteen years before I would return.

As an adult, the places I once knew as a child seem quite small. I was now in my early twenties; I hadn’t been back to Ypsi in years. It was merely coincidental that I happened to be back in the area, so I decided to take a drive through the old neighborhood. The first stop on my list was my old elementary school on Ecorse Road. Then I decided to cruise past my old stomping grounds on South Prospect. Last but not least, the Boys and Girls Club crossed my mind and Gilbert Mansion of course. Given its prior condition before I left, I honestly wasn’t expecting the house to still be there. Curiosity got the best of me though so I hung a left on Michigan Avenue and started toward Park Street. Just a few moments after making a right onto Park, there it was the highest peak of the house just above the trees and you know what, it looked exactly the same way it did when I was a kid. As I got closer I realized something was very different. Gone were the boarded up windows, unkempt landscape and peeling paint from the 1980s. Gilbert Mansion had been restored to its former glory. There are no words that can express the way I felt.

While both my childhood and the 1980s have come and gone, I can still recall the eerie nostalgia of the Gilbert Mansion as though it were yesterday. When I think of Gilbert Mansion, it takes me to a completely different time and place. Today I can drive up Park Street and see the highest peak of the house above the trees, just as it was over twenty years ago. As our today turns into yesterday and future generations come and go, the only existence that will never fade are the footprints of time. Even when I’m gone, I suspect the marks they leave will still remain. They may change but I know they will never fade.

(Michelle Woods grew up in Ypsilanti and still recalls many childhood memories about the places and people in her neighborhood.)