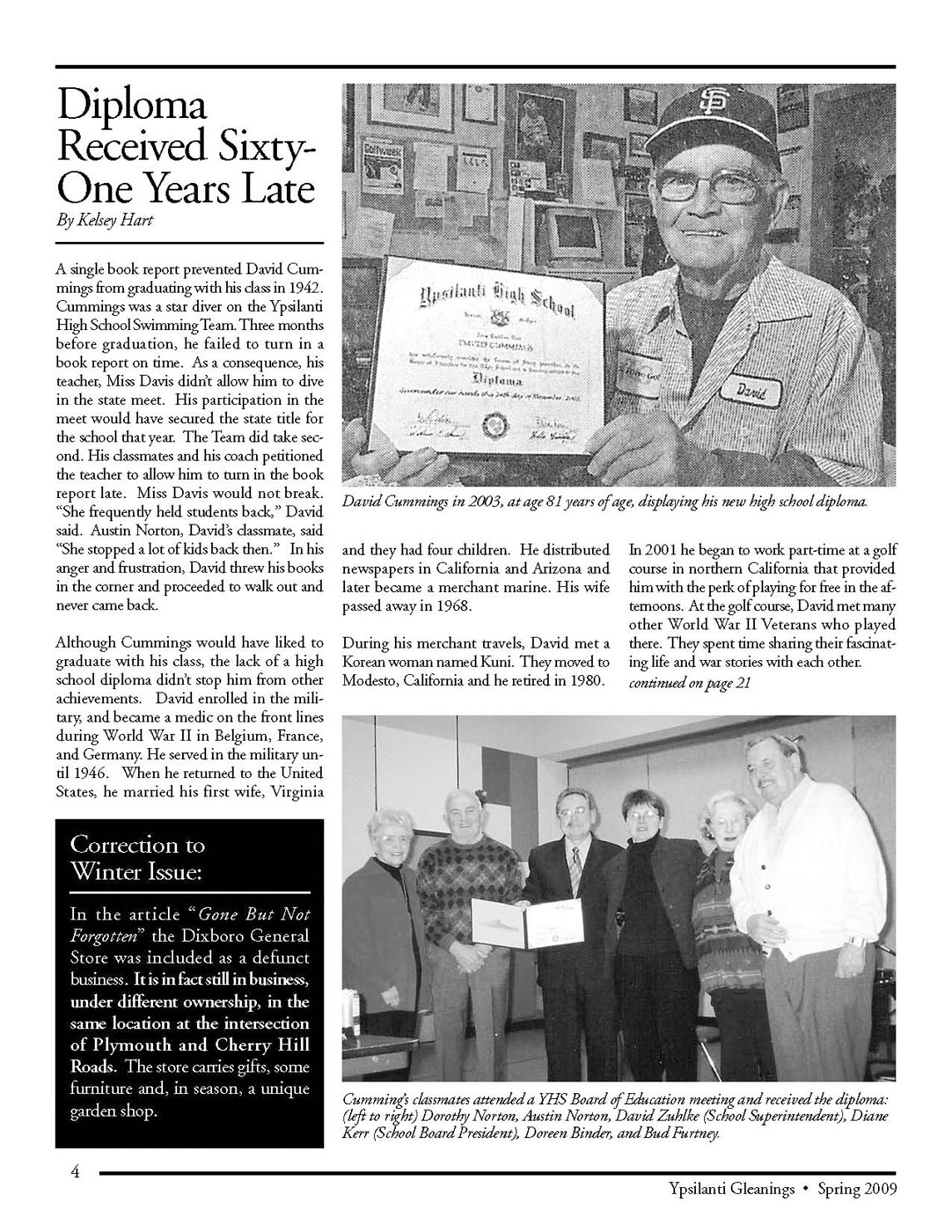 A single book report prevented David Cummings from graduating with his class in 1942. Cummings was a star diver on the Ypsilanti High School Swimming Team. Three months before graduation, he failed to turn in a book report on time. As a consequence, his teacher, Miss Davis didn’t allow him to dive in the state meet. His participation in the meet would have secured the state title for the school that year. The Team did take second. His classmates and his coach petitioned the teacher to allow him to turn in the book report late. Miss Davis would not break. “She frequently held students back,” David said. Austin Norton, David’s classmate, said “She stopped a lot of kids back then.” In his anger and frustration, David threw his books in the corner and proceeded to walk out and never came back.

Although Cummings would have liked to graduate with his class, the lack of a high school diploma didn’t stop him from other achievements. David enrolled in the military, and became a medic on the front lines during World War II in Belgium, France, and Germany. He served in the military until 1946. When he returned to the United States, he married his first wife, Virginia and they had four children. He distributed newspapers in California and Arizona and later became a merchant marine. His wife passed away in 1968.

During his merchant travels, David met a Korean woman named Kuni. They moved to Modesto, California and he retired in 1980.

In 2001 he began to work part-time at a golf course in northern California that provided him with the perk of playing for free in the afternoons. At the golf course, David met many other World War II Veterans who played there. They spent time sharing their fascinating life and war stories with each other.

Although he didn’t graduate with the Ypsilanti High School Class of 1942, he attended their 50th and 60th class reunions. At the 60th reunion, he mentioned to Austin Norton, a classmate, that he wished he had received his diploma. That got Austin thinking and after efforts on the part of several of David’s classmates that wish came true on November 24, 2003. The Ypsilanti School Board Trustees granted David Cummings a high school diploma based upon the board’s decision to grant diplomas to those who left for war prior to graduation. This new policy began with the class of 1942 and has been carried on since. Who would have thought that sixty-one years later at the age of eighty-one, David Cummings would be receiving his diploma?

Cummings sent a card to his classmates expressing what the diploma meant to him. “I’ll never be able to put into words the thrill you have given me. What’s so wonderful about it all is I have always found all the best memories were my high school days and all my friends at Ypsi High. The people that I work with and my family cannot imagine all the effort you have made to make all of this possible. My children have told me there’s no way they could experience the events that took place in their time in school that did in our times. The people I work with said I was very fortunate to have such great classmates. That is something that I have always felt.”

One late book report, a stern and unbending teacher, and sixty-one years without a diploma was finally resolved in 2003 due to the efforts of classmates and friends. Even David’s World War II veteran buddies have a hard time topping his story.

(Kelsey Hart is a junior at Dexter High School and the granddaughter of YHS President Al Rudisill. Thanks to Austin Norton for providing the information for this story.)