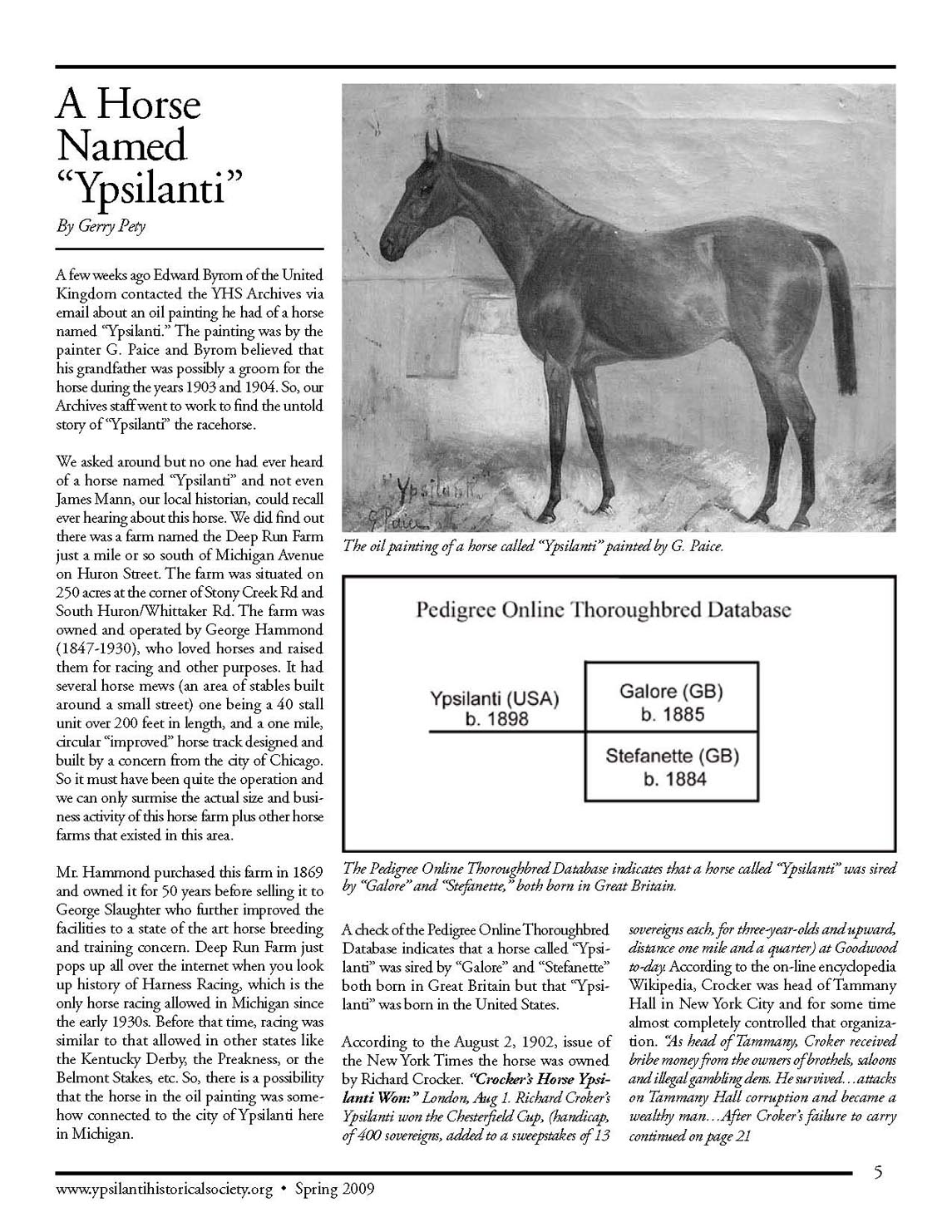 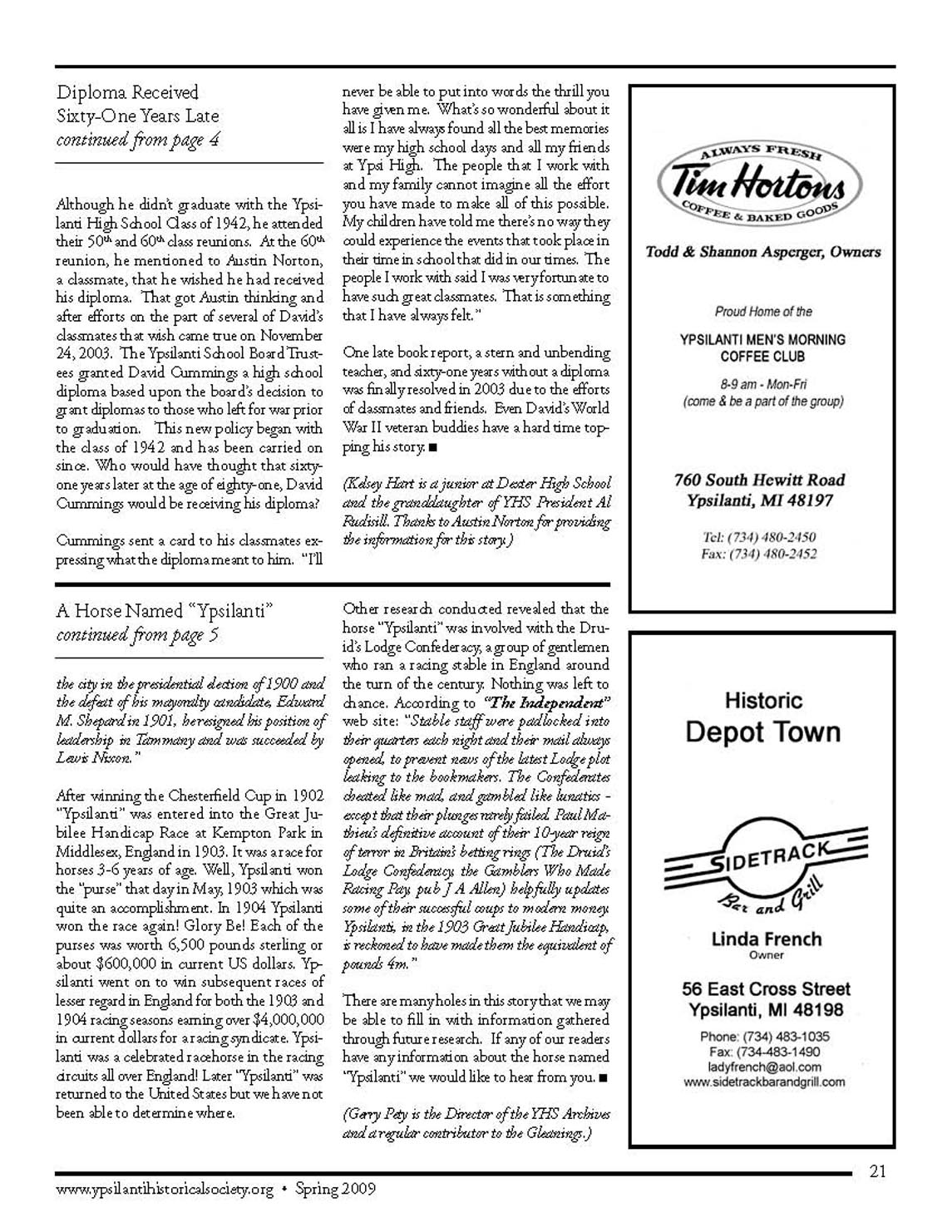 A few weeks ago Edward Byrom of the United Kingdom contacted the YHS Archives via email about an oil painting he had of a horse named “Ypsilanti.” The painting was by the painter G. Paice and Byrom believed that his grandfather was possibly a groom for the horse during the years 1903 and 1904. So, our Archives staff went to work to find the untold story of “Ypsilanti” the racehorse.

We asked around but no one had ever heard of a horse named “Ypsilanti” and not even James Mann, our local historian, could recall ever hearing about this horse. We did find out there was a farm named the Deep Run Farm just a mile or so south of Michigan Avenue on Huron Street. The farm was situated on 250 acres at the corner of Stony Creek Rd and South Huron/Whittaker Rd. The farm was owned and operated by George Hammond (1847-1930), who loved horses and raised them for racing and other purposes. It had several horse mews (an area of stables built around a small street) one being a 40 stall unit over 200 feet in length, and a one mile, circular “improved” horse track designed and built by a concern from the city of Chicago. So it must have been quite the operation and we can only surmise the actual size and business activity of this horse farm plus other horse farms that existed in this area.

Mr. Hammond purchased this farm in 1869 and owned it for 50 years before selling it to George Slaughter who further improved the facilities to a state of the art horse breeding and training concern. Deep Run Farm just pops up all over the internet when you look up history of Harness Racing, which is the only horse racing allowed in Michigan since the early 1930s. Before that time, racing was similar to that allowed in other states like the Kentucky Derby, the Preakness, or the Belmont Stakes, etc. So, there is a possibility that the horse in the oil painting was somehow connected to the city of Ypsilanti here in Michigan.

A check of the Pedigree Online Thoroughbred Database indicates that a horse called “Ypsilanti” was sired by “Galore” and “Stefanette” both born in Great Britain but that “Ypsilanti” was born in the United States.

According to the August 2, 1902, issue of the New York Times the horse was owned by Richard Crocker. “Crocker’s Horse Ypsilanti Won:” London, Aug 1. Richard Croker’s Ypsilanti won the Chesterfield Cup, (handicap, of 400 sovereigns, added to a sweepstakes of 13 sovereigns each, for three-year-olds and upward, distance one mile and a quarter) at Goodwood to-day. According to the on-line encyclopedia Wikipedia, Crocker was head of Tammany Hall in New York City and for some time almost completely controlled that organization. “As head of Tammany, Croker received bribe money from the owners of brothels, saloons and illegal gambling dens. He survived…attacks on Tammany Hall corruption and became a wealthy man…After Croker’s failure to carry the city in the presidential election of 1900 and the defeat of his mayoralty candidate, Edward M. Shepard in 1901, he resigned his position of leadership in Tammany and was succeeded by Lewis Nixon.”

After winning the Chesterfield Cup in 1902 “Ypsilanti” was entered into the Great Jubilee Handicap Race at Kempton Park in Middlesex, England in 1903. It was a race for horses 3-6 years of age. Well, Ypsilanti won the "purse" that day in May, 1903 which was quite an accomplishment. In 1904 Ypsilanti won the race again! Glory Be! Each of the purses was worth 6,500 pounds sterling or about $600,000 in current US dollars. Ypsilanti went on to win subsequent races of lesser regard in England for both the 1903 and 1904 racing seasons earning over $4,000,000 in current dollars for a racing syndicate. Ypsilanti was a celebrated racehorse in the racing circuits all over England! Later “Ypsilanti” was returned to the United States but we have not been able to determine where.

Other research conducted revealed that the horse “Ypsilanti” was involved with the Druid’s Lodge Confederacy, a group of gentlemen who ran a racing stable in England around the turn of the century. Nothing was left to chance. According to “The Independent” web site: “Stable staff were padlocked into their quarters each night and their mail always opened, to prevent news of the latest Lodge plot leaking to the bookmakers. The Confederates cheated like mad, and gambled like lunatics - except that their plunges rarely failed. Paul Mathieu's definitive account of their 10-year reign of terror in Britain's betting rings (The Druid's Lodge Confederacy, the Gamblers Who Made Racing Pay, pub J A Allen) helpfully updates some of their successful coups to modern money. Ypsilanti, in the 1903 Great Jubilee Handicap, is reckoned to have made them the equivalent of pounds 4m.”

There are many holes in this story that we may be able to fill in with information gathered through future research. If any of our readers have any information about the horse named “Ypsilanti” we would like to hear from you.

(Gerry Pety is the Director of the YHS Archives and a regular contributor to the Gleanings.)