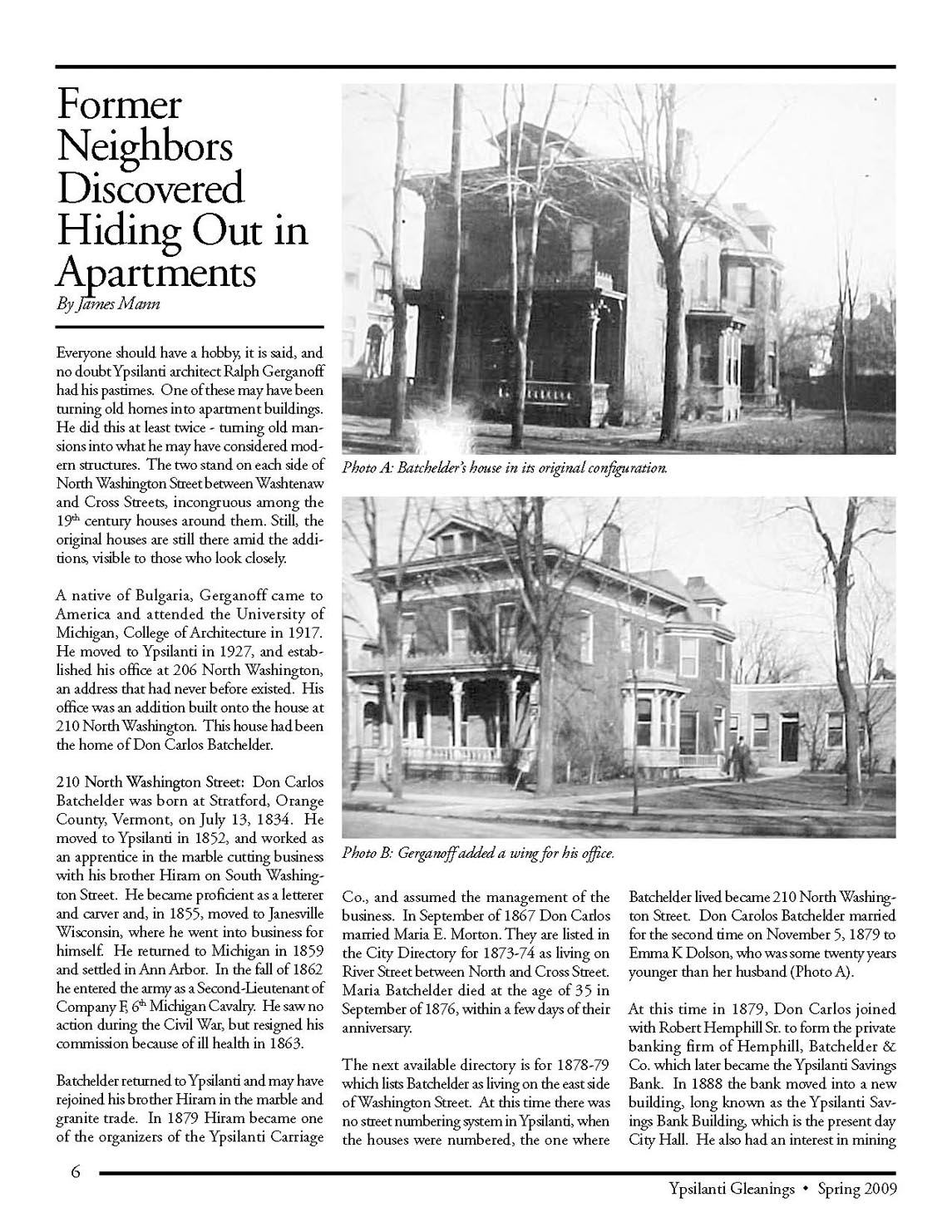 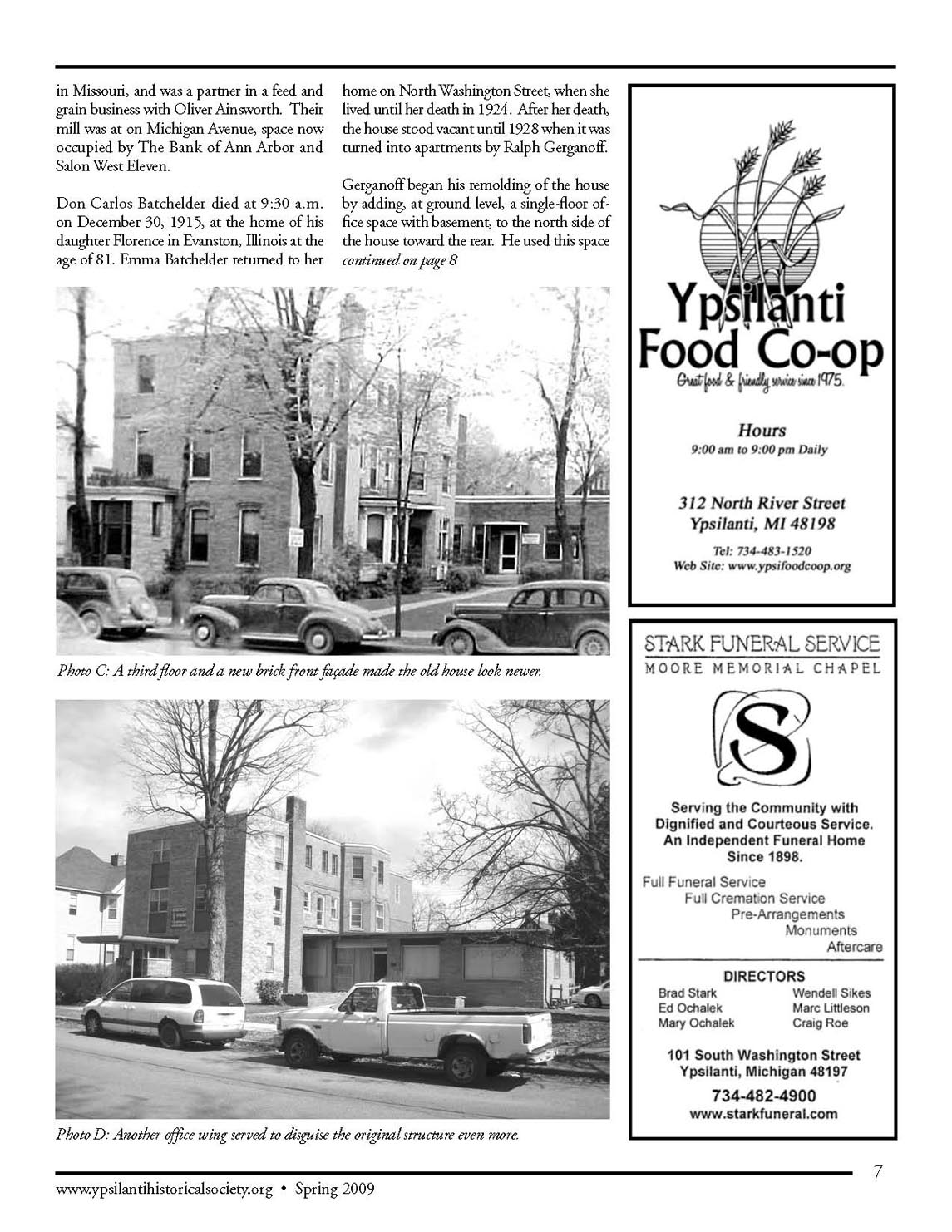 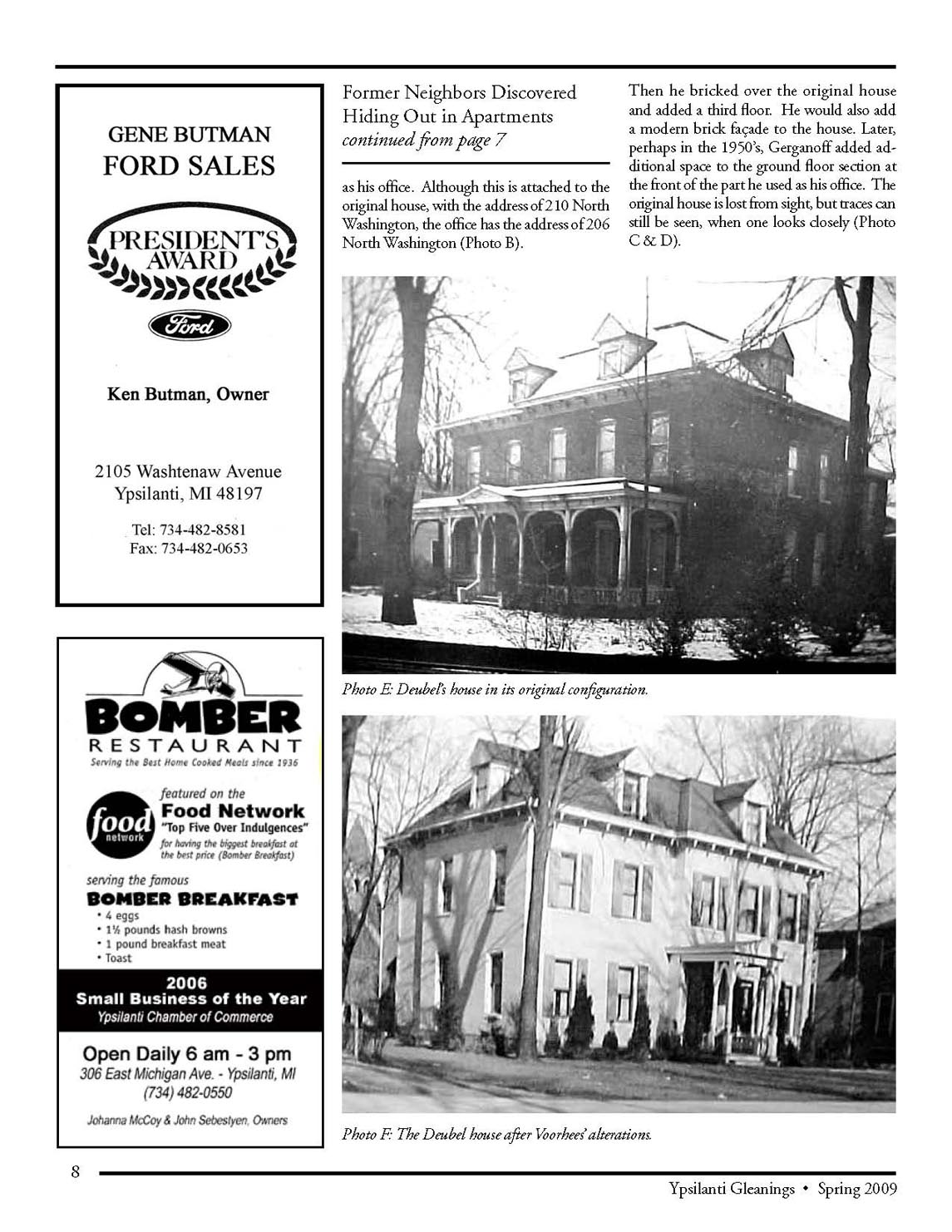 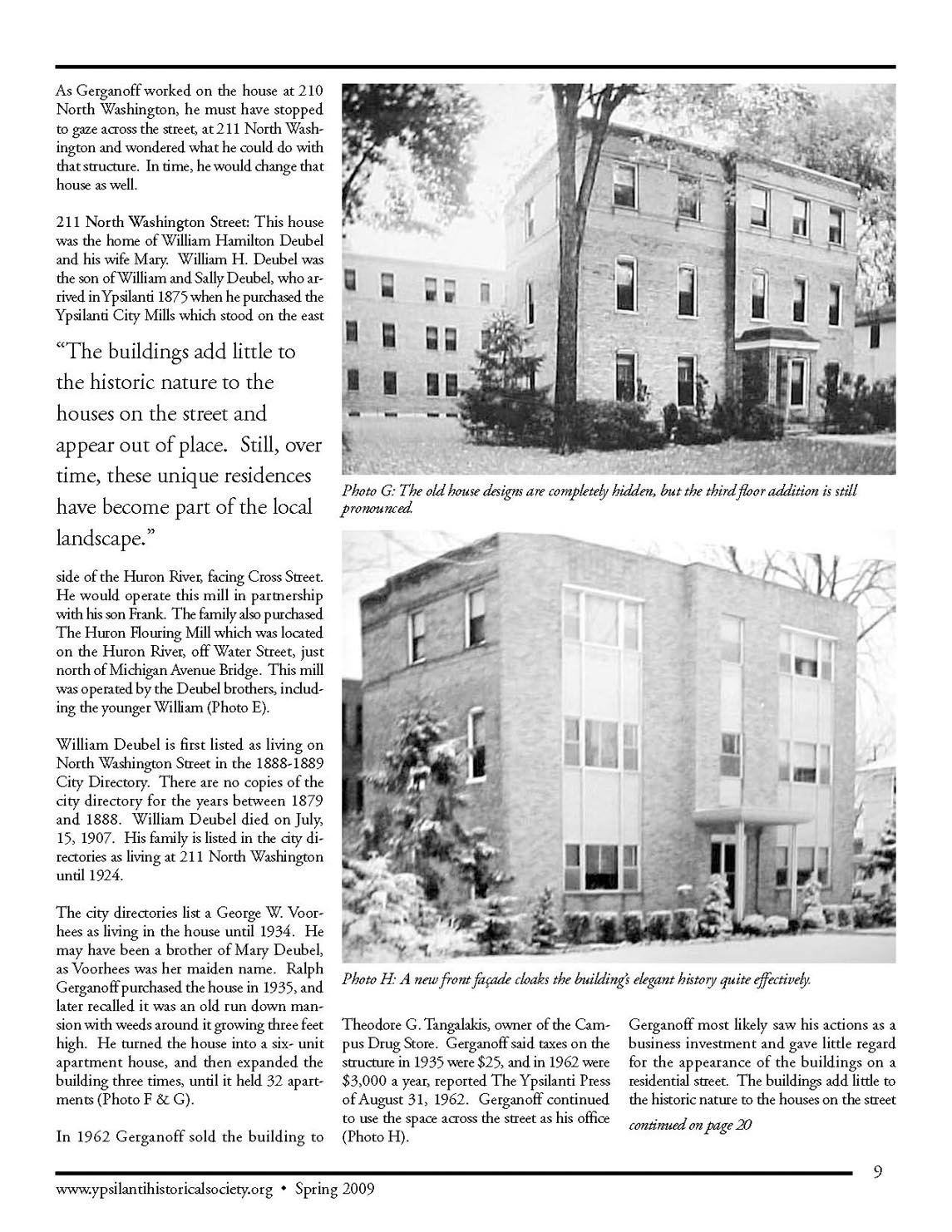 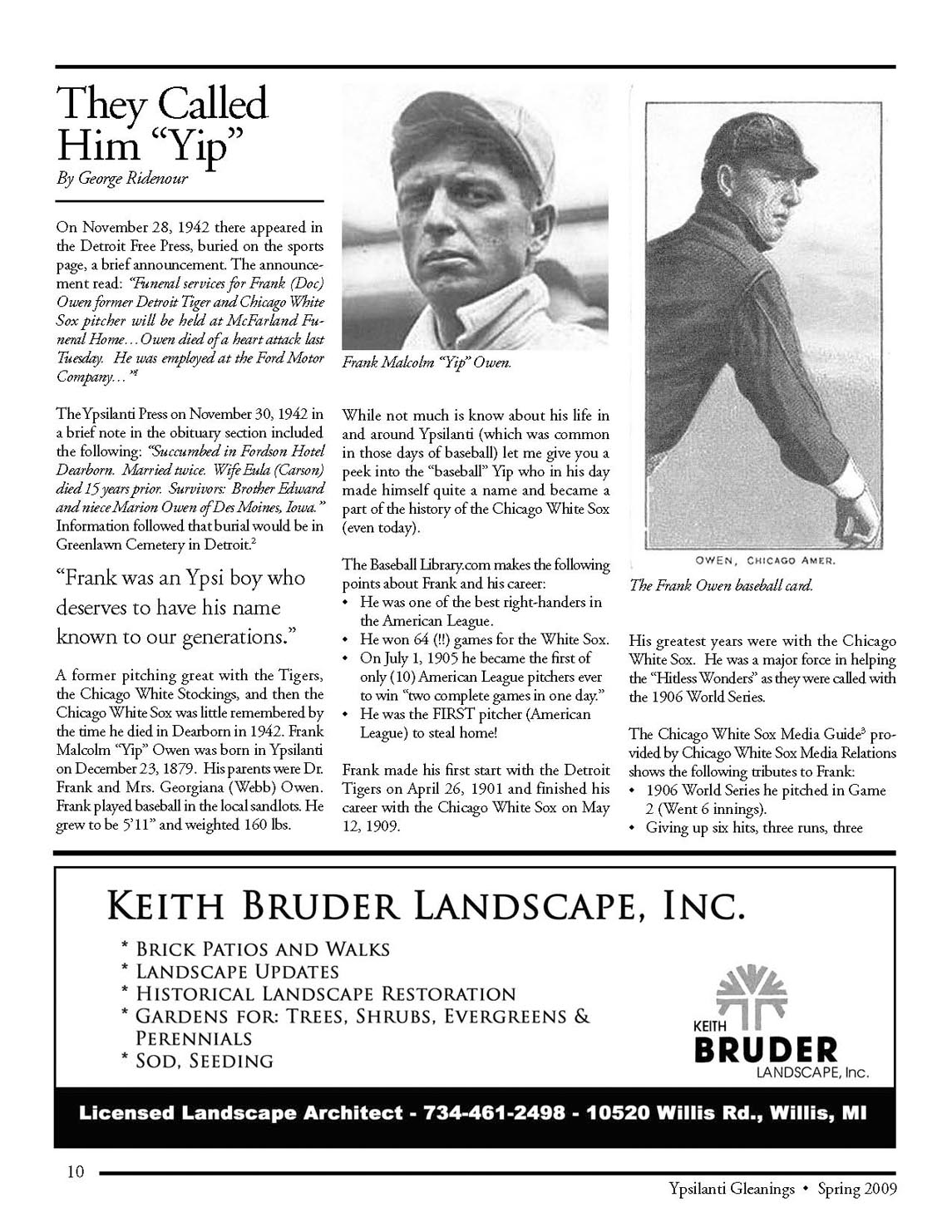 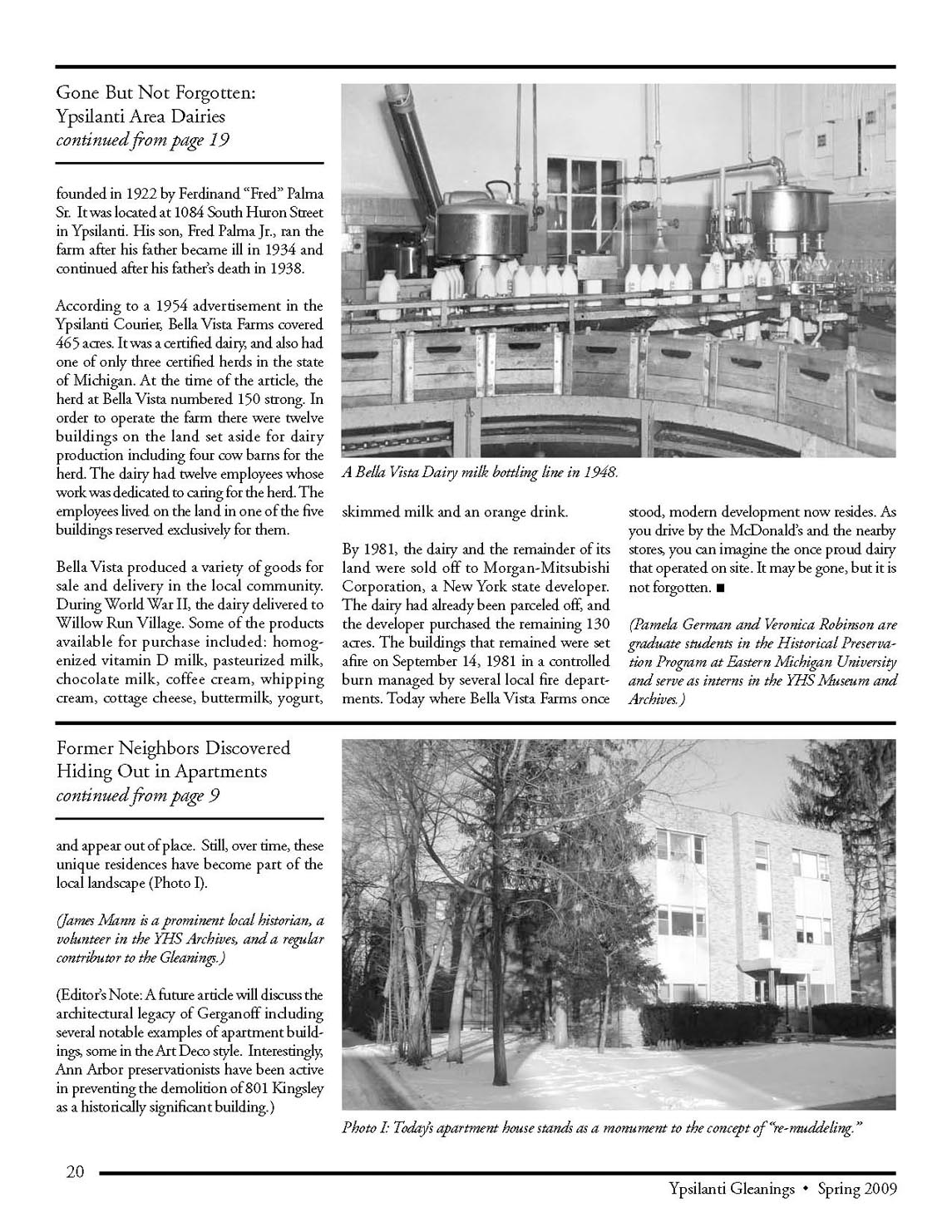 Everyone should have a hobby, it is said, and no doubt Ypsilanti architect Ralph Gerganoff had his pastimes. One of these may have been turning old homes into apartment buildings. He did this at least twice - turning old mansions into what he may have considered modern structures. The two stand on each side of North Washington Street between Washtenaw and Cross Streets, incongruous among the 19th century houses around them. Still, the original houses are still there amid the additions, visible to those who look closely.

A native of Bulgaria, Gerganoff came to America and attended the University of Michigan, College of Architecture in 1917. He moved to Ypsilanti in 1927, and established his office at 206 North Washington, an address that had never before existed. His office was an addition built onto the house at 210 North Washington. This house had been the home of Don Carlos Batchelder.

210 North Washington Street: Don Carlos Batchelder was born at Stratford, Orange County, Vermont, on July 13, 1834. He moved to Ypsilanti in 1852, and worked as an apprentice in the marble cutting business with his brother Hiram on South Washington Street. He became proficient as a letterer and carver and, in 1855, moved to Janesville Wisconsin, where he went into business for himself. He returned to Michigan in 1859 and settled in Ann Arbor. In the fall of 1862 he entered the army as a Second-Lieutenant of Company F, 6th Michigan Cavalry. He saw no action during the Civil War, but resigned his commission because of ill health in 1863.

Batchelder returned to Ypsilanti and may have rejoined his brother Hiram in the marble and granite trade. In 1879 Hiram became one of the organizers of the Ypsilanti Carriage Co., and assumed the management of the business. In September of 1867 Don Carlos married Maria E. Morton. They are listed in the City Directory for 1873-74 as living on River Street between North and Cross Street. Maria Batchelder died at the age of 35 in September of 1876, within a few days of their anniversary.

The next available directory is for 1878-79 which lists Batchelder as living on the east side of Washington Street. At this time there was no street numbering system in Ypsilanti, when the houses were numbered, the one where Batchelder lived became 210 North Washington Street. Don Carolos Batchelder married for the second time on November 5, 1879 to Emma K Dolson, who was some twenty years younger than her husband (Photo A).

At this time in 1879, Don Carlos joined with Robert Hemphill Sr. to form the private banking firm of Hemphill, Batchelder & Co. which later became the Ypsilanti Savings Bank. In 1888 the bank moved into a new building, long known as the Ypsilanti Savings Bank Building, which is the present day City Hall. He also had an interest in mining in Missouri, and was a partner in a feed and grain business with Oliver Ainsworth. Their mill was at on Michigan Avenue, space now occupied by The Bank of Ann Arbor and Salon West Eleven.

Don Carlos Batchelder died at 9:30 a.m. on December 30, 1915, at the home of his daughter Florence in Evanston, Illinois at the age of 81. Emma Batchelder returned to her home on North Washington Street, when she lived until her death in 1924. After her death, the house stood vacant until 1928 when it was turned into apartments by Ralph Gerganoff.

Then he bricked over the original house and added a third floor. He would also add a modern brick façade to the house. Later, perhaps in the 1950's, Gerganoff added additional space to the ground floor section at the front of the part he used as his office. The original house is lost from sight, but traces can still be seen, when one looks closely (Photo C & D).

As Gerganoff worked on the house at 210 North Washington, he must have stopped to gaze across the street, at 211 North Washington and wondered what he could do with that structure. In time, he would change that house as well.

211 North Washington Street: This house was the home of William Hamilton Deubel and his wife Mary. William H. Deubel was the son of William and Sally Deubel, who arrived in Ypsilanti 1875 when he purchased the Ypsilanti City Mills which stood on the east side of the Huron River, facing Cross Street. He would operate this mill in partnership with his son Frank. The family also purchased The Huron Flouring Mill which was located on the Huron River, off Water Street, just north of Michigan Avenue Bridge. This mill was operated by the Deubel brothers, including the younger William (Photo E).

The city directories list a George W. Voorhees as living in the house until 1934. He may have been a brother of Mary Deubel, as Voorhees was her maiden name. Ralph Gerganoff purchased the house in 1935, and later recalled it was an old run down mansion with weeds around it growing three feet high. He turned the house into a six- unit apartment house, and then expanded the building three times, until it held 32 apartments (Photo F & G).

In 1962 Gerganoff sold the building to Theodore G. Tangalakis, owner of the Campus Drug Store. Gerganoff said taxes on the structure in 1935 were $25, and in 1962 were $3,000 a year, reported The Ypsilanti Press of August 31, 1962. Gerganoff continued to use the space across the street as his office (Photo H).

Gerganoff most likely saw his actions as a business investment and gave little regard for the appearance of the buildings on a residential street. The buildings add little to the historic nature to the houses on the street and appear out of place. Still, over time, these unique residences have become part of the local landscape (Photo I).

(James Mann is a prominent local historian, a volunteer in the YHS Archives, and a regular contributor to the Gleanings.)

(Editor’s Note: A future article will discuss the architectural legacy of Gerganoff including several notable examples of apartment buildings, some in the Art Deco style. Interestingly, Ann Arbor preservationists have been active in preventing the demolition of 801 Kingsley as a historically significant building.)

Photo A: Batchelder’s house in its original configuration.
Photo B: Gerganoff added a wing for his office.
Photo C: A third floor and a new brick front façade made the old house look newer.
Photo D: Another office wing served to disguise the original structure even more.
Photo E: Deubel’s house in its original configuration.
Photo F: The Deubel house after Voorhees’ alterations.
Photo G: The old house designs are completely hidden, but the third floor addition is still pronounced.
Photo H: A new front façade cloaks the building’s elegant history quite effectively.
Photo I: Today’s apartment house stands as a monument to the concept of “re-muddeling.”