Nothing Less Than a Miracle 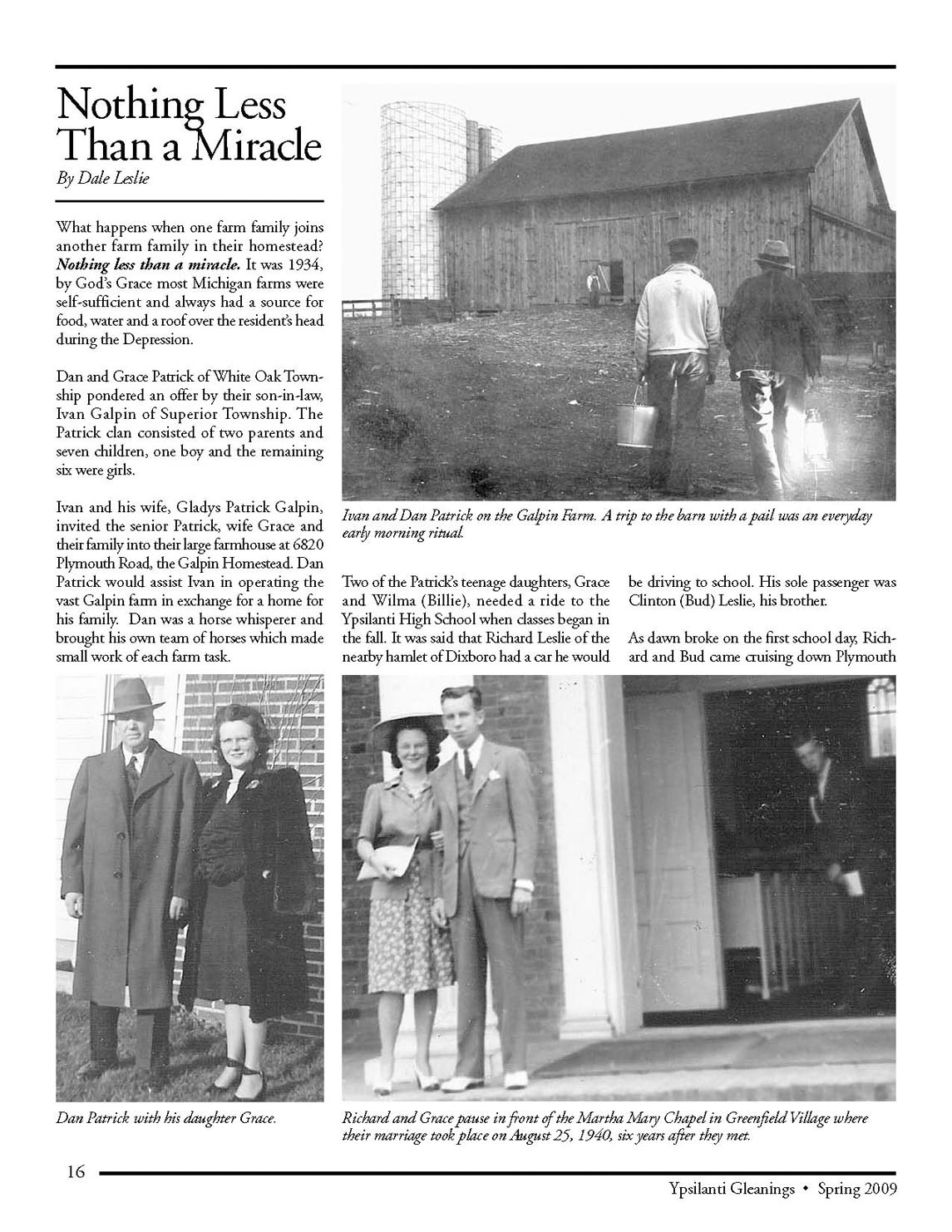 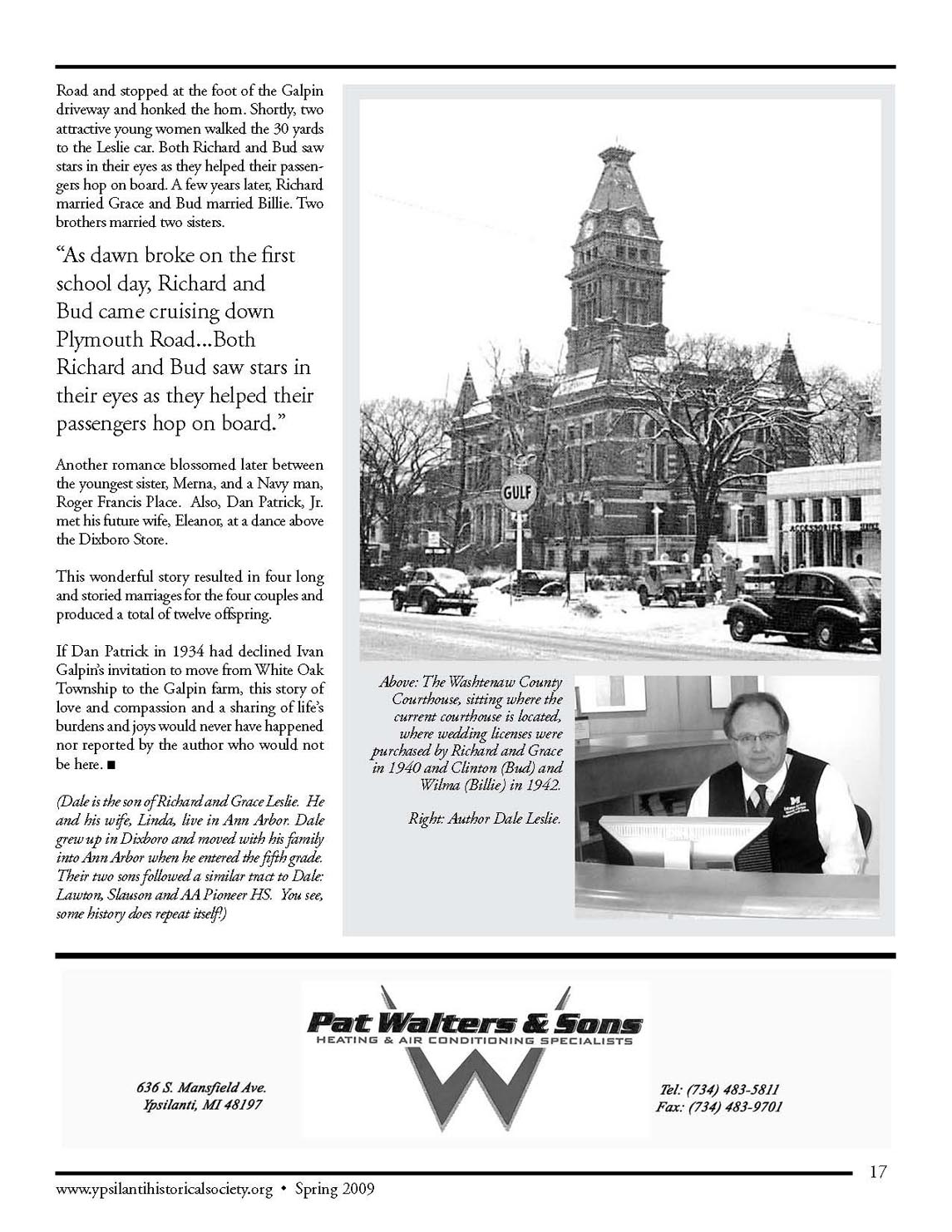 What happens when one farm family joins another farm family in their homestead? Nothing less than a miracle. It was 1934, by God’s Grace most Michigan farms were self-sufficient and always had a source for food, water and a roof over the resident’s head during the Depression.

Dan and Grace Patrick of White Oak Township pondered an offer by their son-in-law, Ivan Galpin of Superior Township. The Patrick clan consisted of two parents and seven children, one boy and the remaining six were girls.

Ivan and his wife, Gladys Patrick Galpin, invited the senior Patrick, wife Grace and their family into their large farmhouse at 6820 Plymouth Road, the Galpin Homestead. Dan Patrick would assist Ivan in operating the vast Galpin farm in exchange for a home for his family. Dan was a horse whisperer and brought his own team of horses which made small work of each farm task.

Two of the Patrick’s teenage daughters, Grace and Wilma (Billie), needed a ride to the Ypsilanti High School when classes began in the fall. It was said that Richard Leslie of the nearby hamlet of Dixboro had a car he would be driving to school. His sole passenger was Clinton (Bud) Leslie, his brother.

As dawn broke on the first school day, Richard and Bud came cruising down Plymouth Road and stopped at the foot of the Galpin driveway and honked the horn. Shortly, two attractive young women walked the 30 yards to the Leslie car. Both Richard and Bud saw stars in their eyes as they helped their passengers hop on board. A few years later, Richard married Grace and Bud married Billie. Two brothers married two sisters.

Another romance blossomed later between the youngest sister, Merna, and a Navy man, Roger Francis Place. Also, Dan Patrick, Jr. met his future wife, Eleanor, at a dance above the Dixboro Store.

This wonderful story resulted in four long and storied marriages for the four couples and produced a total of twelve offspring.

If Dan Patrick in 1934 had declined Ivan Galpin’s invitation to move from White Oak Township to the Galpin farm, this story of love and compassion and a sharing of life’s burdens and joys would never have happened nor reported by the author who would not be here.

(Dale is the son of Richard and Grace Leslie. He and his wife, Linda, live in Ann Arbor.
Dale grew up in Dixboro and moved with his family into Ann Arbor when he entered the fifth grade. Their two sons followed a similar tract to Dale: Lawton, Slauson and AA Pioneer HS. You see, some history does repeat itself!)

Photo 1: Ivan and Dan Patrick on the Galpin Farm. A trip to the barn with a pail was an everyday early morning ritual.
Photo 2: Dan Patrick with his daughter Grace.
Photo 3: Richard and Grace pause in front of the Martha Mary Chapel in Greenfield Village where their marriage took place on August 25, 1940, six years after they met.
Photo 4: The Washtenaw County Courthouse, sitting where the current courthouse is located, where wedding licenses were purchased by Richard and Grace in 1940 and Clinton (Bud) and Wilma (Billie) in 1942.
Photo 5: Author Dale Leslie.