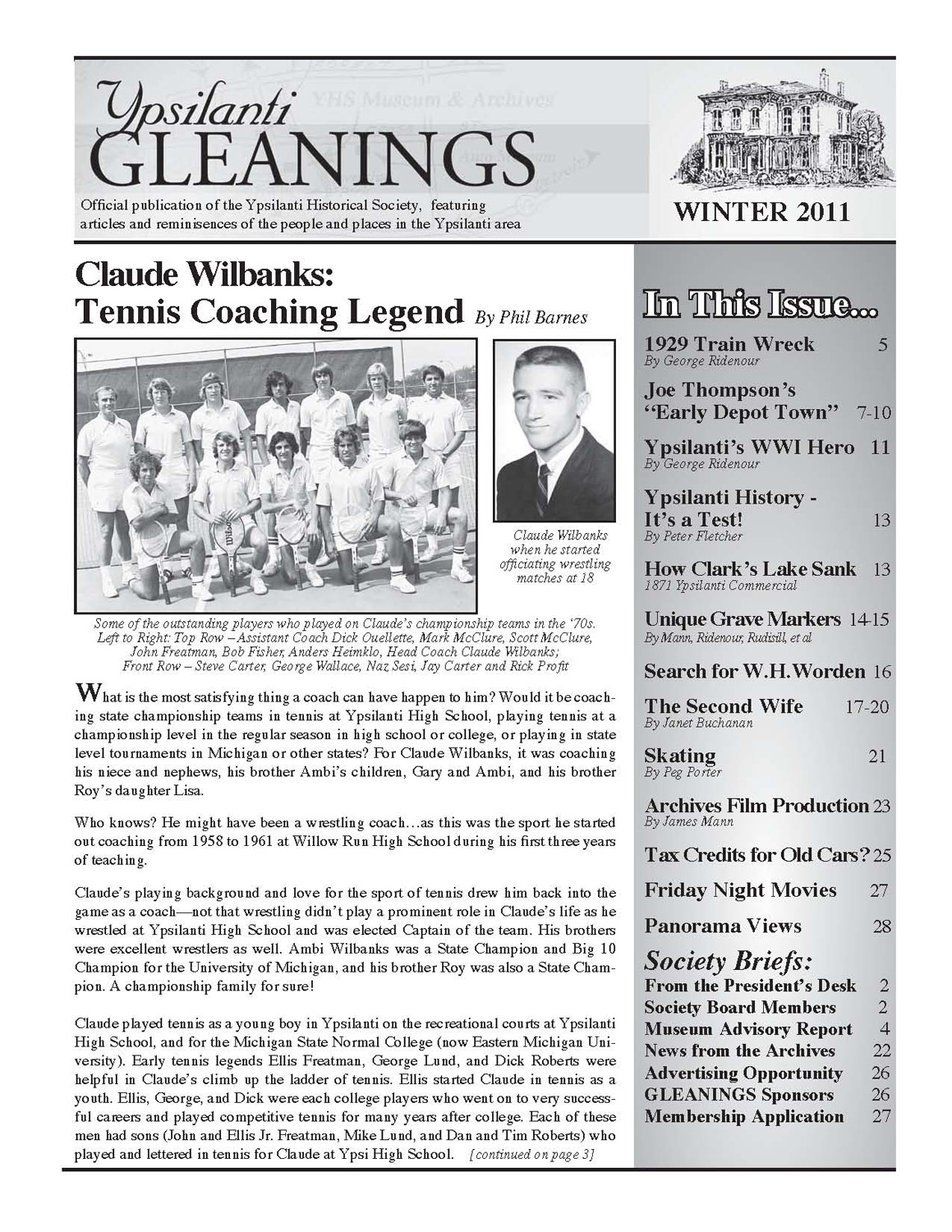 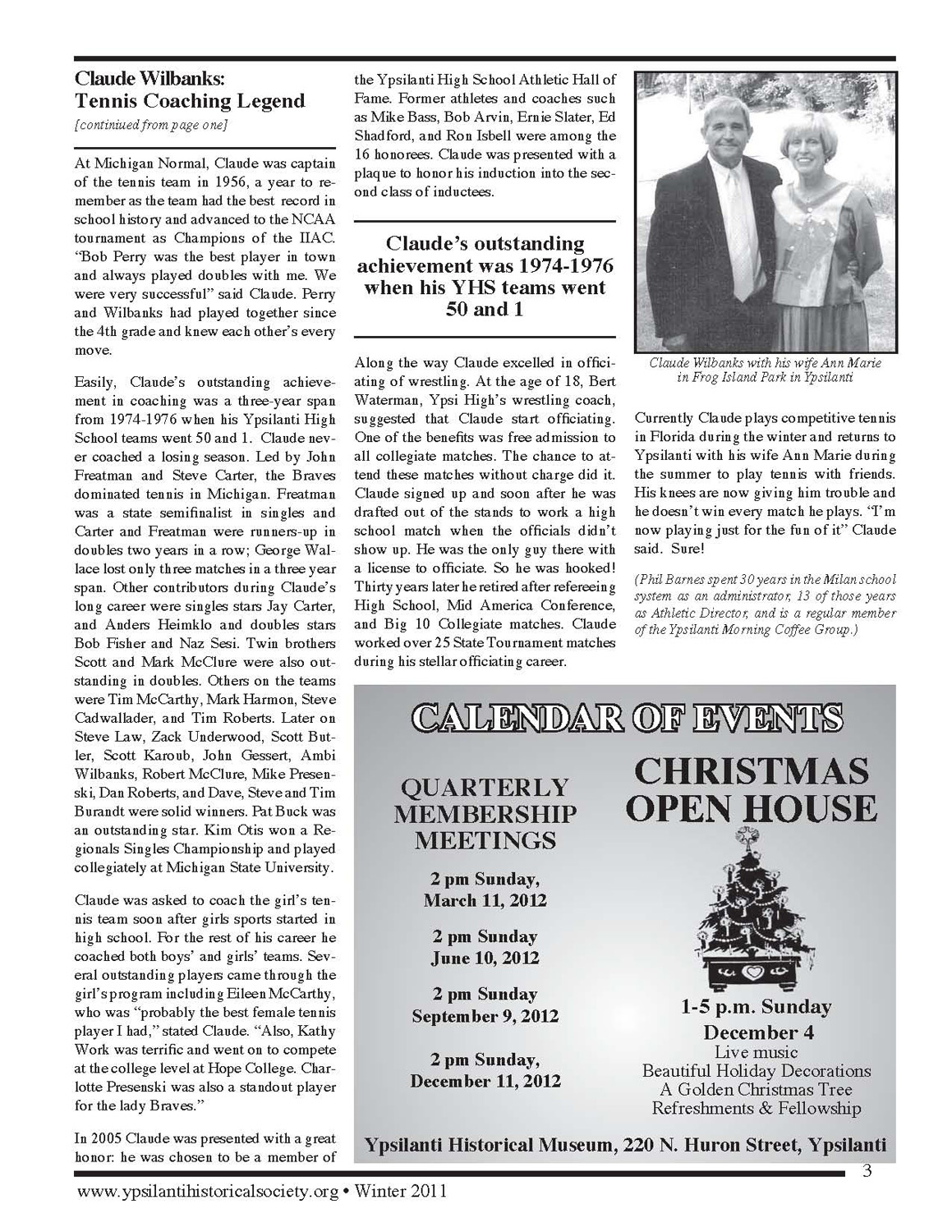 What is the most satisfying things a coach can have happen to him? Would it be coaching state championship teams in Tennis at Ypsilanti High School, playing tennis at a championship level in the regular season in high school or college, or playing in state level tournements in Michigan or other states? For Claude Wilbanks, it was coaching his niece and nephews, his brother Ambi's children, Gary and Ambi, and his brother Roy's daughter Lisa.

Who knows? He might have been a wrestling coach...as this was the sport he started out coaching from 1958 to 1961 at Willow Run High School during his first three eyars of teaching.

Claude's playing background and love for the sport of tennis drew him back into the game as a coach--not that wrestling didn't play a prominent role in Claude's life as he wrestled at Ypsilanti High School and was elected Captain of the team. His brothers were excellent wrestlers as well. Ambi Wilbanks was a State Champion and Big 10 Champion for the University of Michigan, and his brother Roy was also a State Champion. A championship family for sure!

Claude played tennis as a young boy in Ypsilanti on the recreational courts at Ypsilanti High School, and for the Michigan State Normal College (now Eastern Michigan University). Early tennis legends Ellis Freatman, George Lund, and Dick Roberst were helpful in Claude's climb up the ladder of tennis. Ellis started Claude in tennis as a youth. Ellis, George, and Dick were each college players who went on to very successful careers and played competitive tennis for many years after college. Each of these men had sons (John and Ellis Jr. Freatman, Mike Lund, and Dan and Tim Robers) who played and lettered in tennis for Claude at Ypsi High School.

At Michigan Normal, Claude was captain of the tennis team in 1956, a year to remember as the team had the best record in school history and advanced to the NCAA tournament as Champions of the IIAC. "Bob Perry was the best player in town and always played doubles with me. We were very successful" said Claude. Perry and Wilbanks had played together since the 4th grade and knew each other's every move.

Claude was asked to coach the girl's tennis team soon after girls sports started in high school. For the rest of his career he coached both boys' and girls' teams. Several outstanding players came through the girl's program including Eileen McCarthy, who was "probably the best female tennis player I had," stated Claude. "Also, Kathy Work was terrific and went on to compete at the college level at Hope College. Charlotte Presenki was also a standout player for the lady Braves."

Along the way Claude excelled in officiating of wrestling. At the age of 18, Bert Waterman, Ypsi High's wrestling coach, suggested that Claude start officiating. One of the benefits was free admission to all collegiate matches. The chance to attend these matches without chard did it. Claude signed up and soon after he wss drafted out of the stands to work a high school match when the officials didn't show up. He was the only guy there with a licnese to officiate. So he was hooked! Thirty years later he retired after referring High School, Mid America Conference, and Big 10 Collegitate matches. Claude worked over 25 State Tournament matches during his stellar officiating career.

Currently Claude plays cmopetitive tennis in Florida during the winter and returns ot Ypsilanti with his wife Ann Marie during the summer to play tennis with friends. His knees are now giving him trouble and he doesn't win every match he plays. "I'm now playing just for the fun of it" Claude said. Sure!

(Phil Barnes spent 30 years in the Milan school system as an administrator, 13 of those years as Athletic Director, and is a regular member of the Ypsilanti Morning Coffee Group.)

Claude Wilbanks when he started officiating wrestling matches at 18