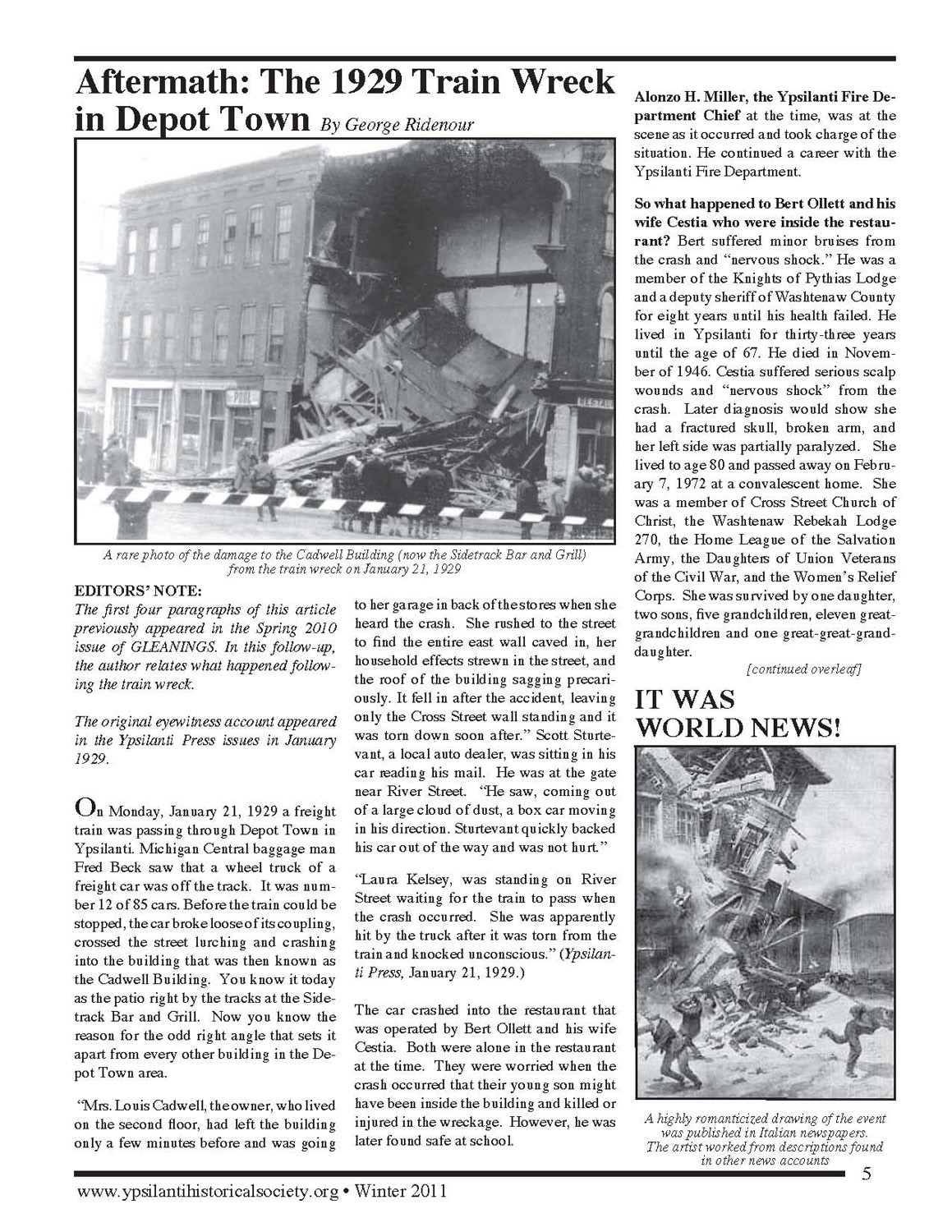 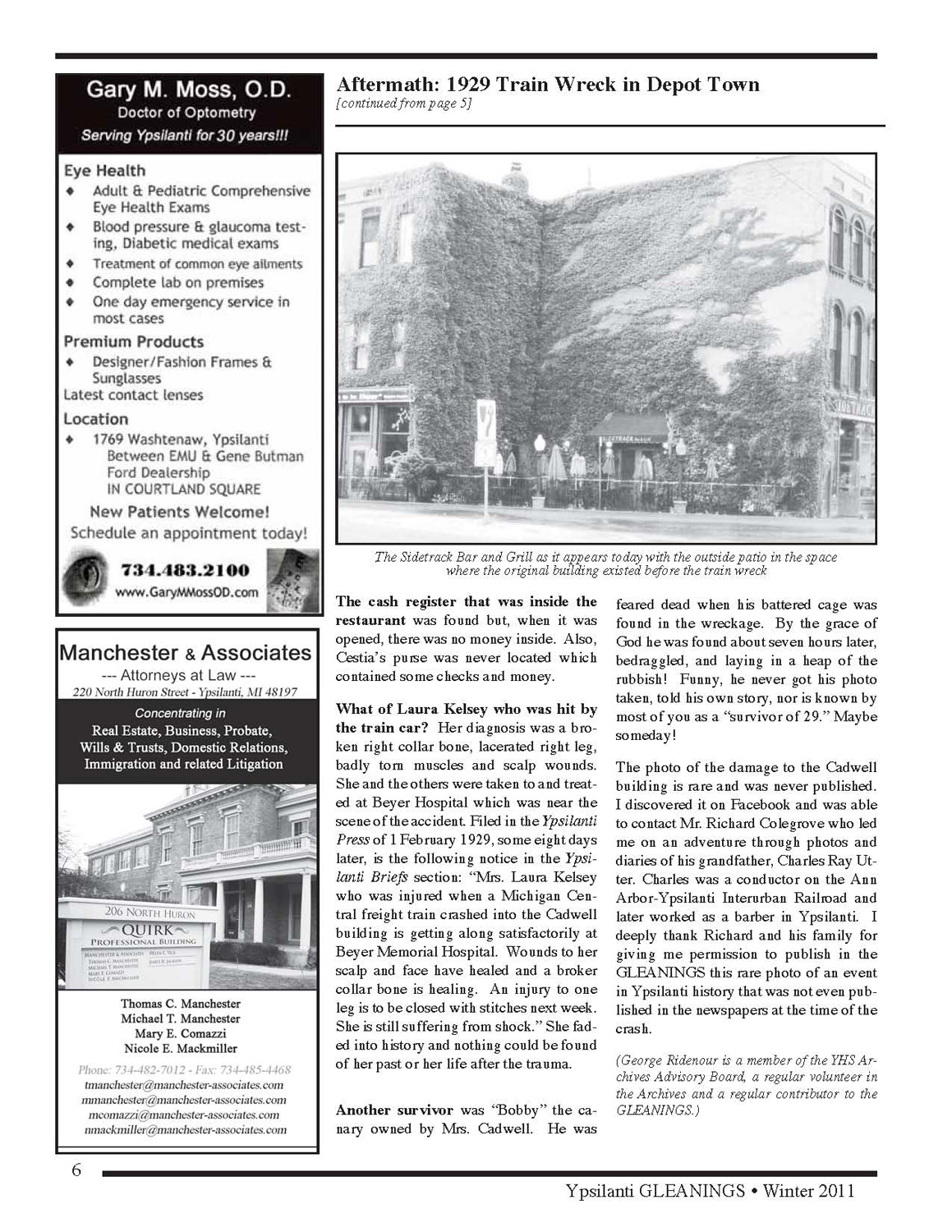 EDITORS' NOTE:
The first four paragraphs of this article previously appeared in the Spring 2010 issue of GLEANINGS. In this follow-up, the author relates what happened following the train wreck. The original eyewitness account appeared in the Ypsilanti Press issues in January 1929.

On Monday, January 21, 1929 a freight train was passing through Depot Town in Ypsilanti. Michigan Central baggage man Fred Beck saw that a wheel truck of a freight car was off the track. It was number 12 of 85 cars. Before the train could be stopped, the car broke loose of its coupling, crossed the street lurching and crashing into the building that was then known as the Cadwell Building. You know it today as the patrio right by the tracks at the Sidetrack Bar and Grill. Now you know the reason for the odd right angle that sets it apart from every other building in the Depot Town area.

"Mrs. Louis Cadwell, the owner, who lived on the second floor, and left the building only a few minutes before and was going to her garage in back of the stores when she heard the crash. She rushed to the street to find the entire east wall caved in, her household effects strewn in the street, and the roof of the building sagging precariously. It fell in after the accident, leaving only the Cross Street wall standing and it was torn down soon after." Scott Sturtevant, a local auto dealer, was sitting in his car reading his mail. He was at the gate near River Street. "He saw, coming out of a large cloud of dust, a box car moving in his direction. Sturtevant quickly backed his car out of the way and was not hurt."

"Laura Kelsey, was standing on River Street waiting for the train to pass when the crash occurred. She was apparently hit by the truck after it was torn from the train and knocked unconscious." (Ypsilanti Press, January 21, 1929.)

The car crashed into the restaurant that was operated by Bert Ollett and his wife Cestia. Both were alone in the restaurant at the time. They were worried when the crash occurred that their young son might have been inside the building and killed or injured in the wreckage. However, he was later found safe at school.

Alonzo H. Miller, the Ypsilanti Fire Department Chief at the time, was at the scene as it occurred and took charge of the situation. He continued a career with the Ypsilanti Department.

So what happened to Bert Ollett and his wife Cestia who were inside the restaurant? Bert suffered minor bruises from the crash and "nervous shock." He was a member of the Knights of Pythias Lodge and a deputy sheriff of Washtenaw County for eitght years until his health failed. He lived in Ypsilanti for thirty-three years until the age of 67. He died in November of 1946. Cestia wuffered serious scalp wounds and "nervous shock" from the crash. later diagnosis would show she had a fractured skull, broken arm, and her left side was partially paralyzed. She lived to age 80 and passed away on February 7, 1972 at a convalescent home. She was a member of Cross Street Church of Christ, the Washtenaw Rebekah Lodge 270, the Home League of the Salvation Army, the Daughters of Union Veterans of the Civil War, and the Women's Relief Corps. She was survived by one daughter, two sons, five grandchildren and one great-great-granddaughter.

The cash register that was inside the restaurant was found but, when it was opened, there was no money inside. Also, Cestia's purse was never located which contained some checks and money.

What of Laura Kelsey who was hit by the train car? Her diagnosis was a broken right collar bone, lacerated right leg, badly torn muscles and scalp wounds. She and the others were taken to and treated at Beyer Hospital which was near the scene of the accident. Filed in the Ypsilanti Press of 1 February 1929, some eight days later, is the following notice in the Ypsilanti Briefs section: "Mrs. Laura Kelsey who was injured when a Michigan Central freight train crashed into the Cadwell building is getting along satisfactorily at Beyer Memorial Hospital. Wounds to her scalp and face have healed and a broken collar bone is healing. An injury to one leg is to be closed with stitches next week. She is still suffering from shock." She faded into history and nothing could be found of her past or her life after the trauma.

Another survivor was "Bobby" the canary owned by Mrs. Cadwell. He was feared dead when his battered cage was found in the wreckage. By the grace of God he was found about severn hours later, bedraggled, and laying in a heap of the rubbish! Funny he never got his photo taken, told his own story, nor is known by most of you as a "survivor of 29." Maybe someday!

The photo of the damage to the Cadwell building is rare and was never published. I discovered it on Facebook and was able to contact Mr. Richard Colegrove who led me on an adventure through photos and diaries of his grandfather, Charles Ray Utter. Charles was a conductor on the Ann Arbor-Ypsilanti Interurban Railroad and later worked as a barber in Ypsilanti. I deeply thank Richard and his family for giving me permission to publish in the GLEANINGS this rare photo of an event in Ypsilanti history that was not even published in the newspapers at the time of the crash.

(George Ridenour is a member of the YHS Archives Advisory Board, a regular volunteer in the Archives and a regular contributor to the GLEANINGS.)

A rare photo of the damage to the Cadwell Building (now Sidetrack Bar and Grill) from the train wreck on January 21, 1929.

A highly romanticized drawing of the event was published in Italian newspapers. The artist worked from descriptions found in other news accounts.