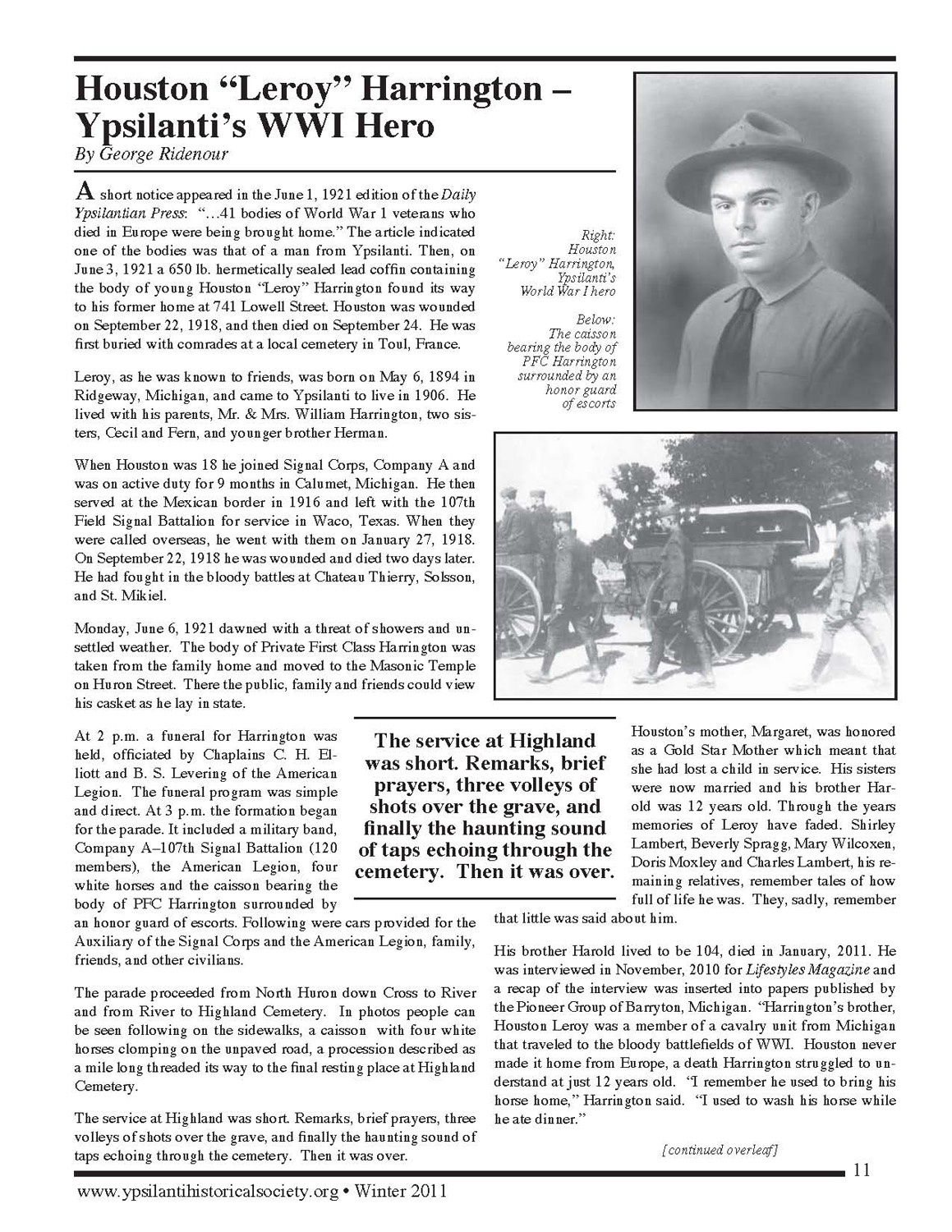 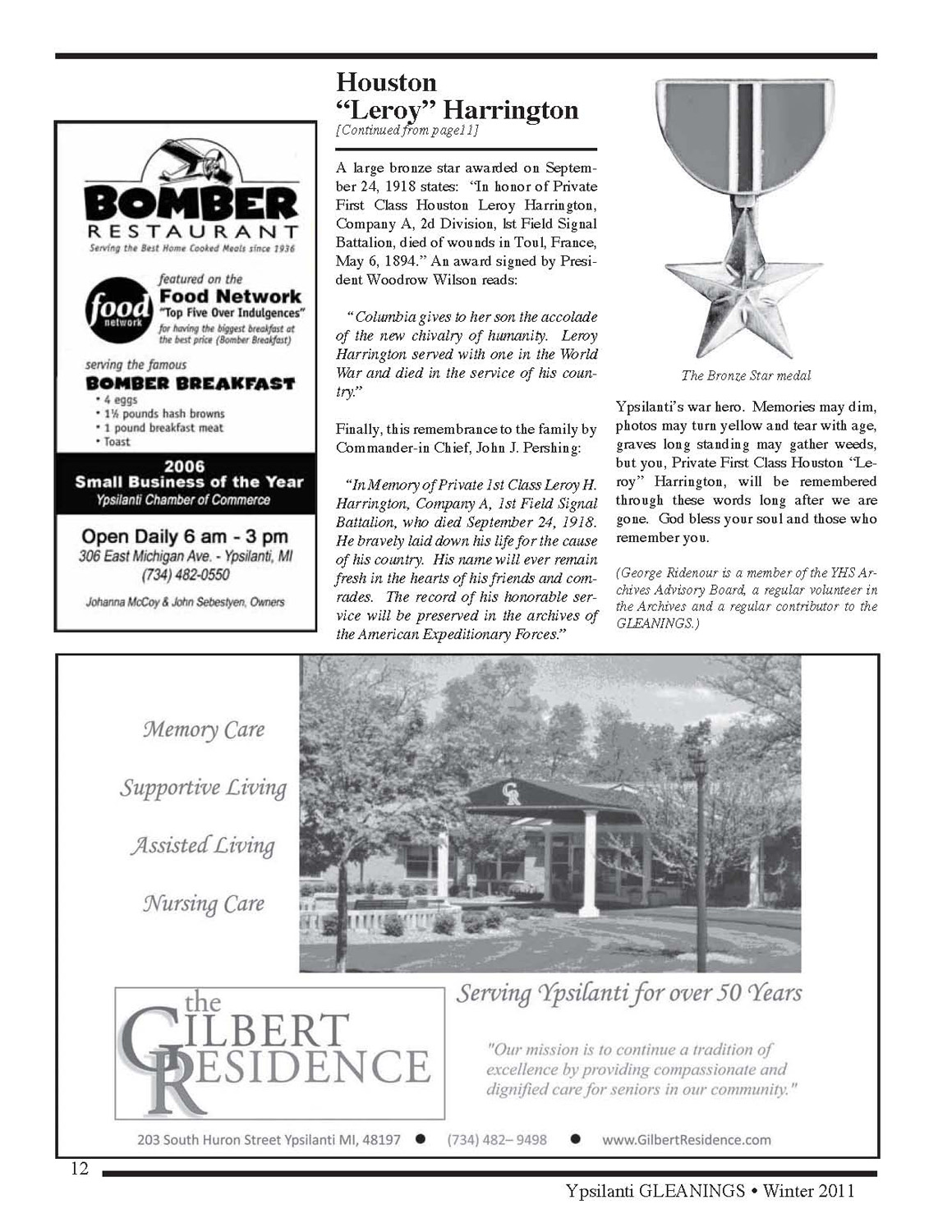 A short notice appeared in the June 1,1921 edition of the Daily Ypsilantian Press: "...41 bodies of World War 1 veterans who died in Europe were being brought home." The article indicated one of the bodies was that of a man from Ypsilanti. Then, on June 3, 1921 a 650 Ib. hermetically sealed lead coffin containing the body of young Houston "Leroy" Harrington found its way to his former home at 741 Lowell Street. Houston was wounded on September 22, 1918, and then died on September 24. He was first buried with comrades at a local cemetery in Toul, France.

Leroy, as he was known to friends, was born on May 6, 1894 in Ridgeway, Michigan, and came to Ypsilanti to live in 1906. He lived with his parents, Mr. & Mrs. William Harrington, two sisters, Cecil and Fern, and younger brother Herman.

When Houston was 18 he joined Signal Corps, Company A and was on active duty for 9 months in Calumet, Michigan. He then served at the Mexican border in 1916 and left with the 107th Field Signal Battalion for service in Waco, Texas. When they were called overseas, he went with them on January 27, 1918. On September 22,1918 he was wounded and died two days later. He had fought in the bloody battles at Chateau Thierry, Solsson, and St. Mikiel.

Monday, June 6, 1921 dawned with a threat of showers and unsettled weather. The body of Private First Class Harrington was taken from the family home and moved to the Masonic Temple on Huron Street. There the public, family and friends could view his casket as he lay in state.

At 2 p.m. a funeral for Harrington was held, officiated by Chaplains C. H. Elliott and B. S. Levering of the American Legion. The funeral program was simple and direct. At 3 p.m. the formation began for the parade. It included a military band, Company A-107th Signal Battalion (120 members), the American Legion, four white horses and the caisson bearing the body of PFC Harrington surrounded by an honor guard of escorts. Following were cars provided for the Auxiliary of the Signal Corps and the American Legion, family, friends, and other civilians.

The parade proceeded from North Huron down Cross to River and from River to Highland Cemetery. In photos people can be seen following on the sidewalks, a caisson with four white horses clomping on the unpaved road, a procession described as a mile long threaded its way to the final resting place at Highland Cemetery.

The service at Highland was short. Remarks, brief prayers, three volleys of shots over the grave, and finally the haunting sound of laps echoing through the cemetery. Then it was over.

Houston's mother, Margaret, was honored as a Gold Star Mother which meant that she had lost a child in service. His sisters were now married and his brother Harold was 12 years old. Through the years memories of Leroy have faded. Shirley Lambert, Beverly Spragg, Mary Wilcoxen, Doris Moxley and Charles Lambert, his remaining relatives, remember tales of how that little was said about him.

His brother Harold lived to be 104, died in January, 2011. He was interviewed in November, 2010 for Lifest\les Magazine and a recap of the interview was inserted into papers published by the Pioneer Group ofBarryton, Michigan. "Harrington's brother, Houston Leroy was a member of a cavalry unit from Michigan that traveled to the bloody battlefields of WW1. Houston never made it home from Europe, a death Harrington struggled to un- derstand at just 12 years old. "I remember he used to bring his horse home," Harrington said. "I used to wash his horse while he ate dinner."

“Columbia gives to her son the accolade of the new chivalry of humanity. Leroy Harrington served with one in the World War and died in the service of his country.”

Finally, this remembrance to the family by Commander-in-Chief, John J. Pershing.

“In Memory of Private 1st Class Leroy H. Harrington, Company A, 1st Field Signal Battalion, who died September 24, 1918. He bravely laid down his life for the cause of his country. His name will ever remain fresh in the hearts of his friends and comrades. The record of his honorable service will be preserved in the archives of the American Expeditionary Forces.” .

Below: The caisson bearing the body of PFC Harrington surrounded by an honor guard of escorts

(George Ridenour is a member of the YHS Archives Advisory Board, a regular volunteer in the Archives and a regular contributor to the GLEANINGS.)