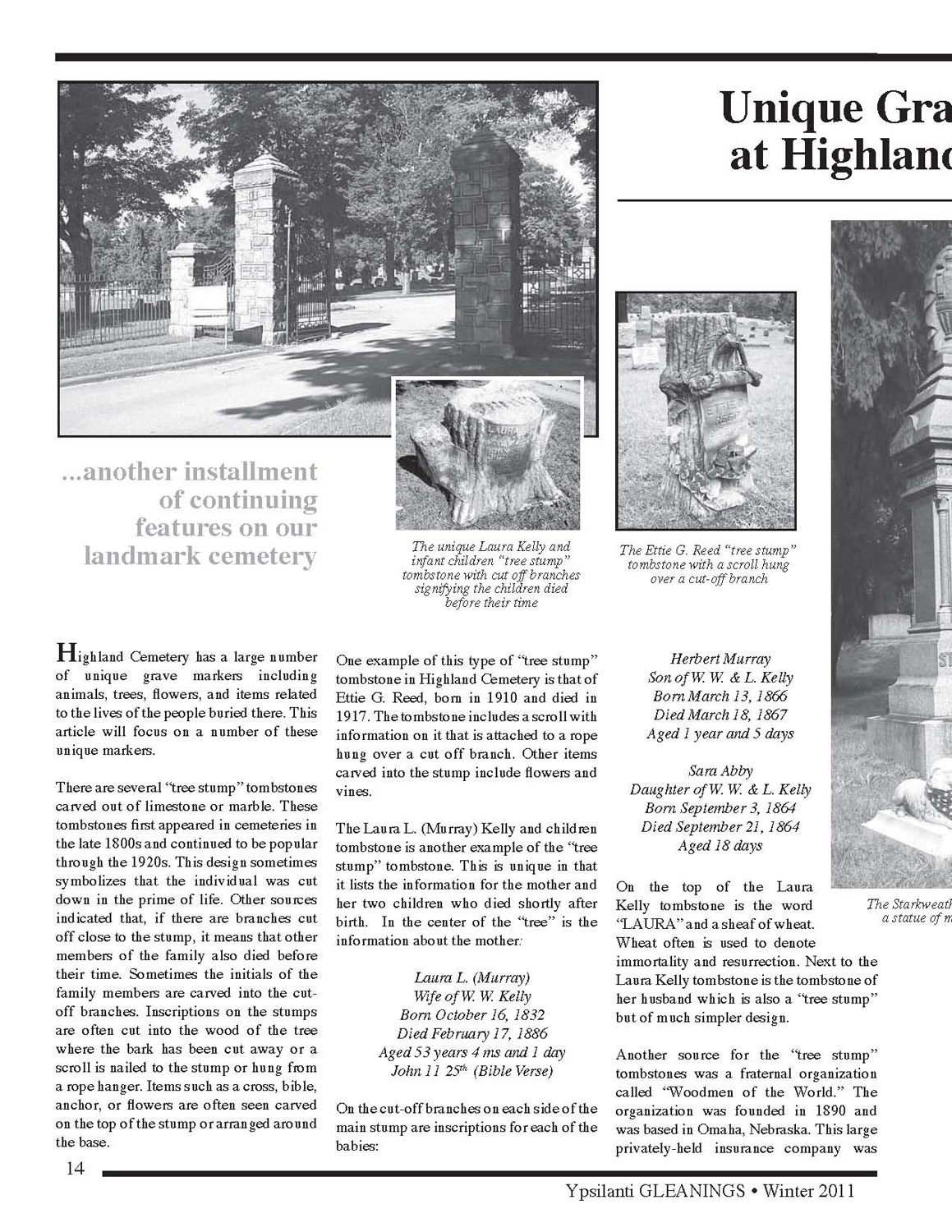 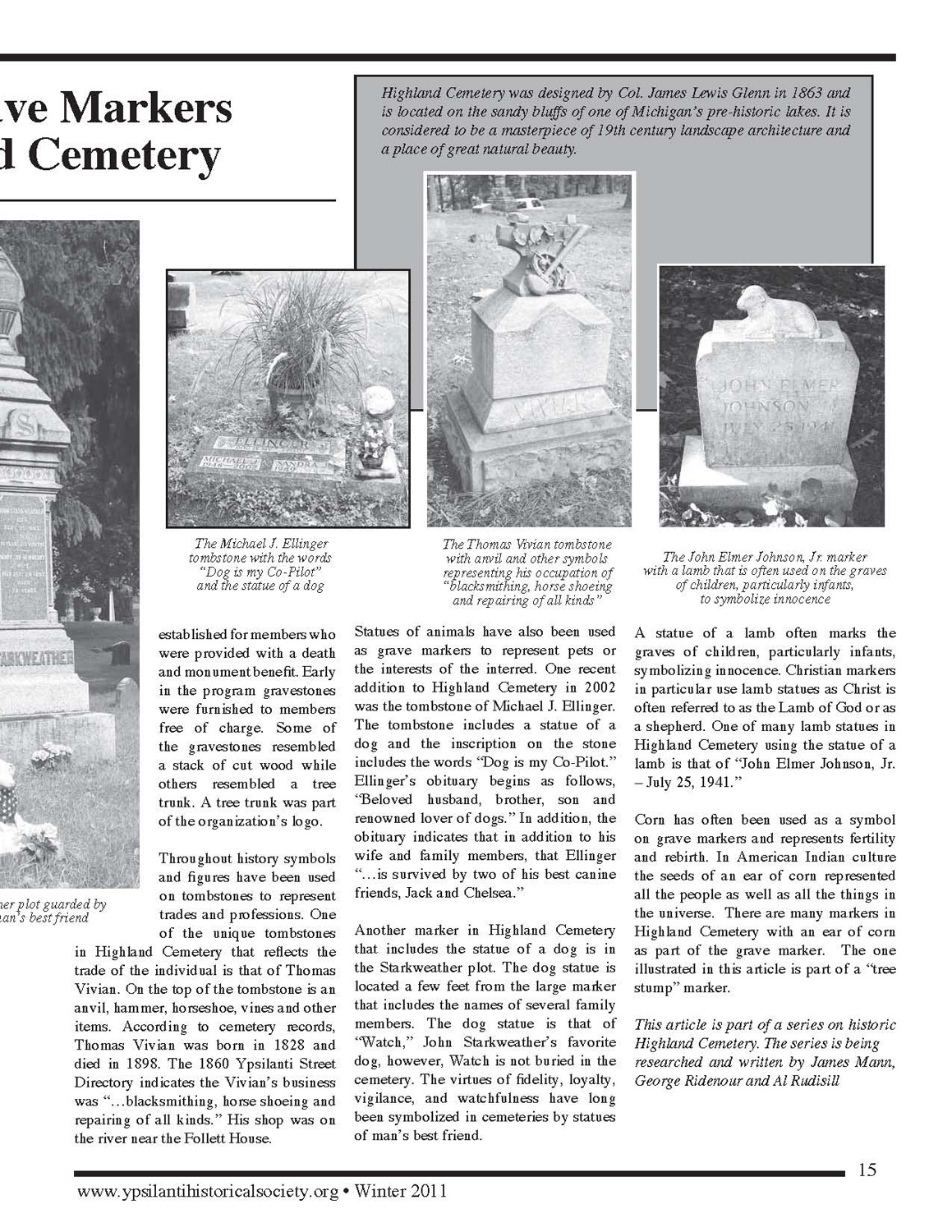 Highland Cemetery has a large number of unique grave markers including animals, trees, flowers, and items related to the lives of the people buried there. This article will focus on a number of these unique markers.

There are several “tree stump” tombstones carved out of limestone or marble. These tombstones first appeared in cemeteries in the late 1800s and continued to be popular through the 1920s. This design sometimes symbolizes that the individual was cut down in the prime of life. Other sources indicated that, if there are branches cut off close to the stump, it means that other members of the family also died before their time. Sometimes the initials of the family members are carved into the cut- off branches. Inscriptions on the stumps are often cut into the wood of the tree where the bark has been cut away or a scroll is nailed to the stump or hung from a rope hanger. Items such as a cross, bible, anchor, or flowers are often seen carved on the top of the stump or arranged around the base.

One example of this type of “tree stump” tombstone in Highland Cemetery is that of Ettie G. Reed, born in 1910 and died in 1917. The tombstone includes a scroll with information on it that is attached to a rope hung over a cut off branch. Other items carved into the stump include flowers and vines.

On the cut-off branches on each side of the main stump are inscriptions for each of the babies:

Another source for the “tree stump” tombstones was a fraternal organization called “Woodmen of the World.” The organization was founded in 1890 and was based in Omaha, Nebraska. This large privately-held insurance company was established for members who were provided with a death and monument benefit. Early in the program gravestones were furnished to members free of charge. Some of the gravestones resembled a stack of cut wood while others resembled a tree trunk. A tree trunk was part of the organization’s logo.

Throughout history symbols and figures have been used on tombstones to represent trades and professions. One of the unique tombstones in Highland Cemetery that reflects the trade of the individual is that of Thomas Vivian. On the top of the tombstone is an anvil, hammer, horseshoe, vines and other items. According to cemetery records, Thomas Vivian was born in 1828 and died in 1898. The 1860 Ypsilanti Street Directory indicates the Vivian’s business was “...blacksmithing, horse shoeing and repairing of all kinds.” His shop was on the river near the Follett House.

Statues of animals have also been used as grave markers to represent pets or the interests of the interred. One recent addition to Highland Cemetery in 2002 was the tombstone of Michael J. Ellinger. The tombstone includes a statue of a dog and the inscription on the stone includes the words “Dog is my Co-Pilot.” Ellinger’s obituary begins as follows, “Beloved husband, brother, son and renowned lover of dogs.” In addition, the obituary indicates that in addition to his wife and family members, that Ellinger “...is survived by two of his best canine friends, Jack and Chelsea.”

Another marker in Highland Cemetery that includes the statue of a dog is in the Starkweather plot. The dog statue is located a few feet from the large marker that includes the names of several family members. The dog statue is that of “Watch,” John Starkweather’s favorite dog, however, Watch is not buried in the cemetery. The virtues of fidelity, loyalty, vigilance, and watchfulness have long been symbolized in cemeteries by statues of man’s best friend.

A statue of a lamb often marks the graves of children, particularly infants, symbolizing innocence. Christian markers in particular use lamb statues as Christ is often referred to as the Lamb of God or as a shepherd. One of many lamb statues in Highland Cemetery using the statue of a lamb is that of “John Elmer Johnson, Jr. – July 25, 1941.”

Corn has often been used as a symbol on grave markers and represents fertility and rebirth. In American Indian culture the seeds of an ear of corn represented all the people as well as all the things in the universe. There are many markers in Highland Cemetery with an ear of corn as part of the grave marker. The one illustrated in this article is part of a “tree stump” marker.

Photo 1: The unique Laura Kelly and infant children “tree stump” tombstone with cut off branches signifying the children died before their time

Photo 2: The Ettie G. Reed “tree stump” tombstone with a scroll hung over a cut-off branch

Photo 5: The Starkweather plot guarded by a statue of man's best friend

Photo 6: The Michael J. Ellinger tombstone with the words “Dog is my Co-Pilot” and the statue of a dog

Photo 7: The Thomas Vivian tombstone with anvil and other symbols representing his occupation of “blacksmithing, horse shoeing and repairing of all kinds”

Photo 8: The John Elmer Johnson, Jr. marker with a lamb that is often used on the graves of children, particularly infants, to symbolize innocence