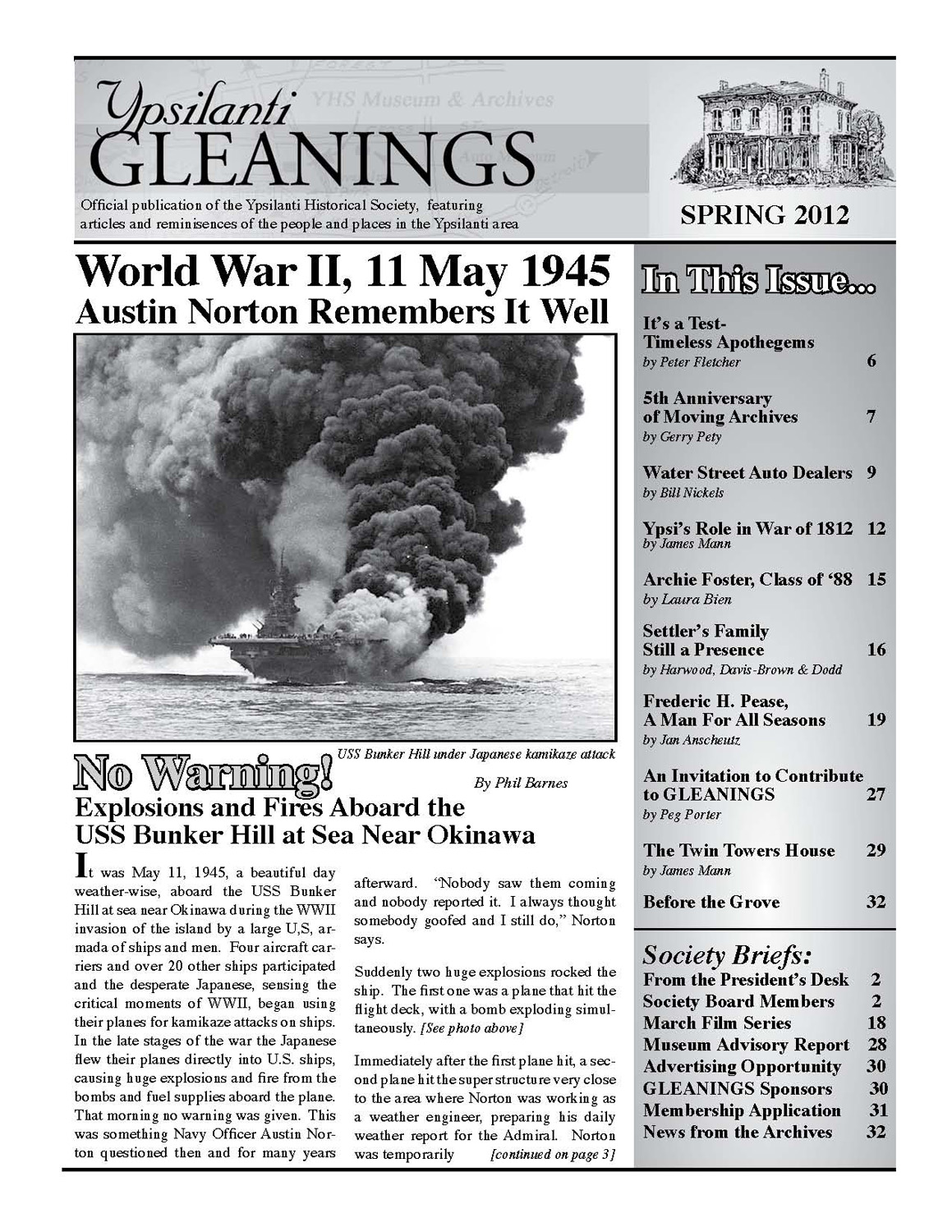 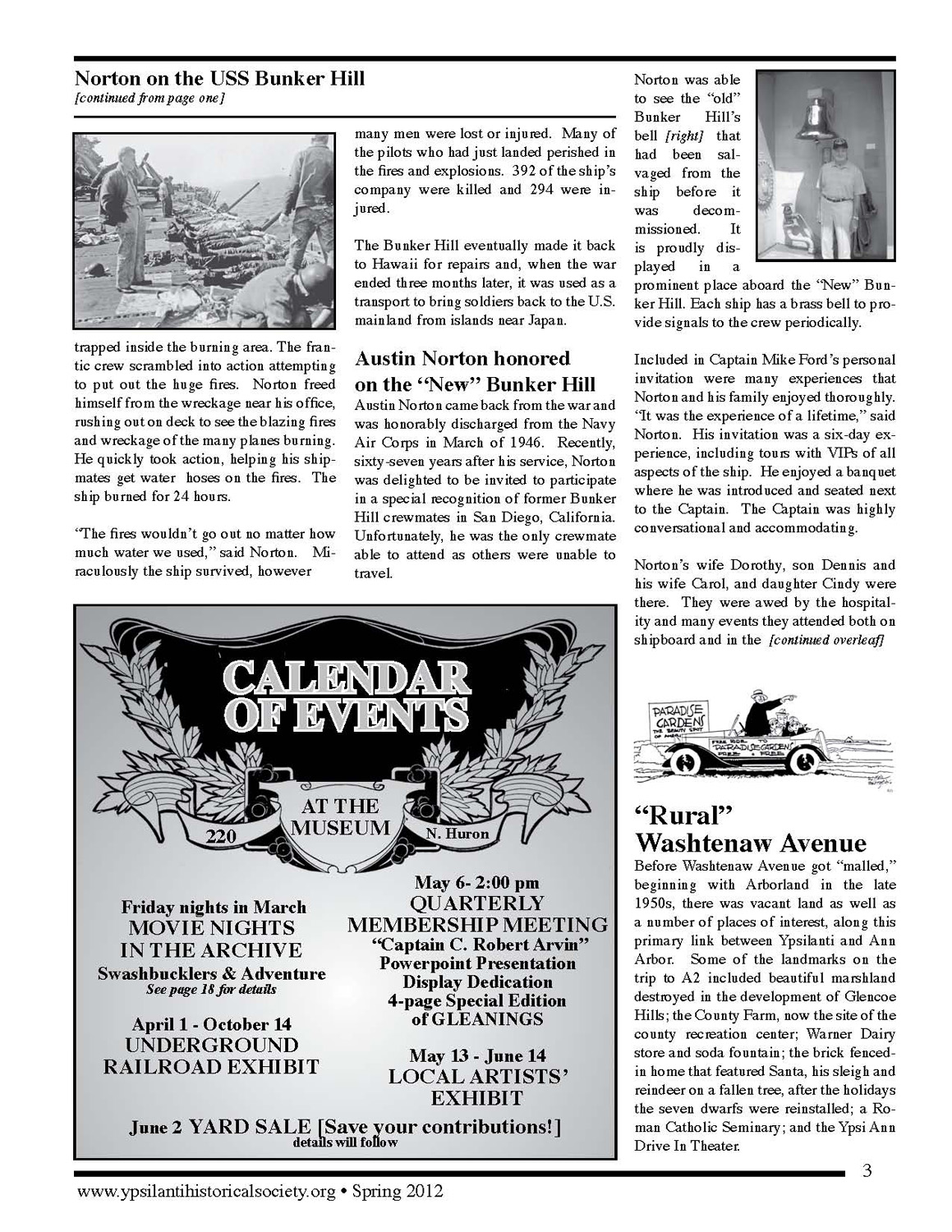 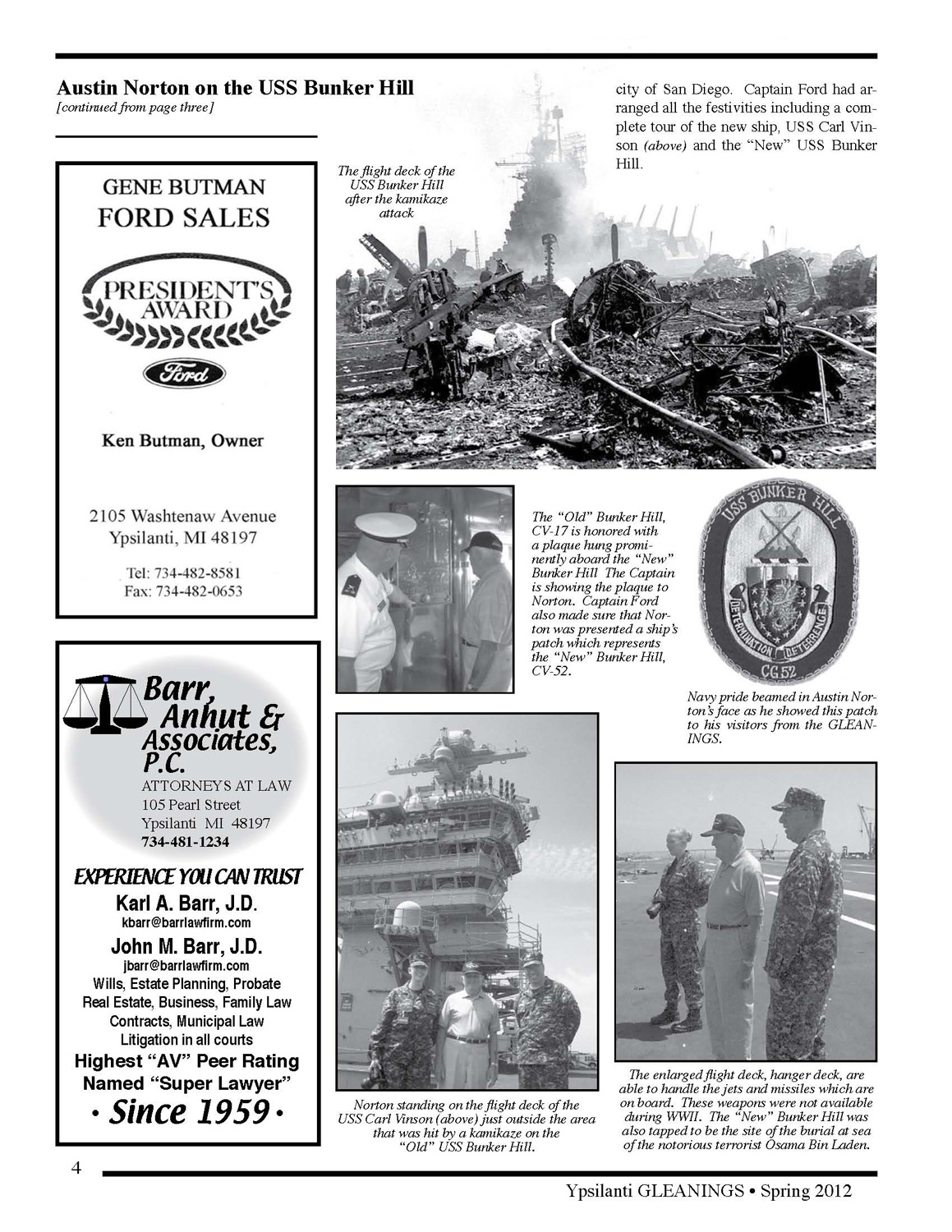 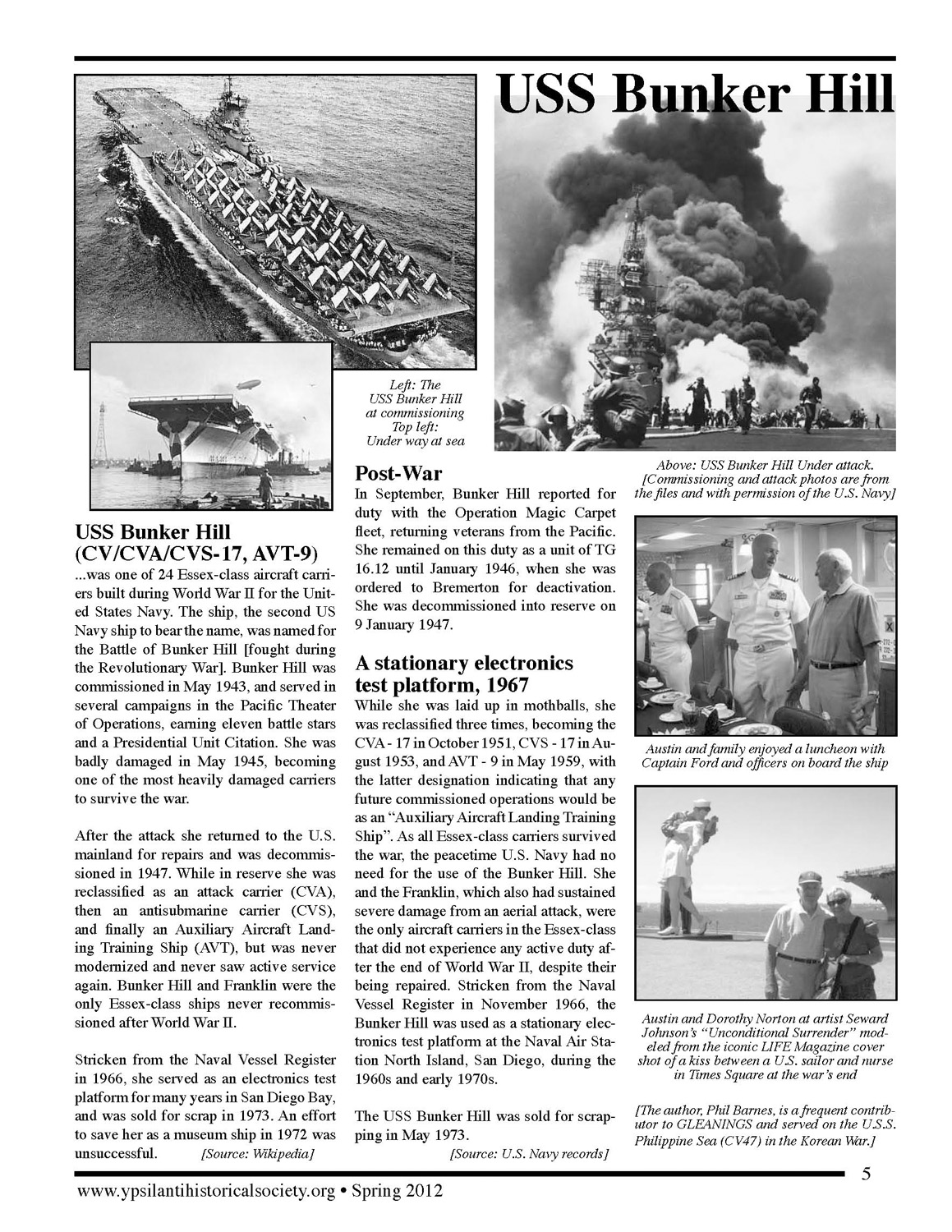 No Warning! Explosions and Fires Aboard the USS Bunker Hill at Sea Near Okinawa

It was May 11, 1945, a beautiful day weather-wise, aboard the USS Bunker Hill at sea near Okinawa during the WWII invasion of the island by a large U.S. armada or ships and men. Four aircraft carriers and over 20 other ships participated and the desperate Japanese, sensing the critical moments of WWII, began using their planes for kamikaze attacks on ships. In the late stages of the war the Japanese flew their planes directly into U.S. ships, causing huge explosions and fire from the bombs and fuel supplies aboard the plane. That morning no warning was given. This was something Navy Officer Austin Norton questioned then and for many years afterward. "Nobody saw them coming and nobody reported it. I always thought somebody goofed and I still do," Norton says.

Suddenly two huge explosions rocked the ship. The first one was a plane that hit the flight deck, with a bomb exploding simultaneously.

Immediately after the first plane hit, a second plane hit the super structure very close to the area where Norton was working as a weather engineer, preparing his daily weather report for the Admiral. Norton was temporarily trapped inside the burning area. The frantic crew scrambled into action attempting to put out the huge fires. Norton freed himself from the wreckage near his office, rushing out on deck to see the blazing fires and wreckage of the many planes burning. He quickly took action, helping his shipmates get water hoses on the fires. The ship burned for 24 hours.

"The fires wouldn't go out no matter how much water we used," said Norton. Miraculously the ship survived, however many men were lost or injured. Many of the pilots who had just landed perished in the fires and the explosions. 392 of the ship's company were killed and 294 were injured.

The Bunker Hill eventually made it back to Hawaii for repairs and, when war ended three months later, it was used as a transport to bring soldiers back to the U.S. mainland from islands near Japan.

Austin Norton honored on the "New" Bunker Hill
Austin Norton came back from war and was honorably discharged from the Navy Air Corps in March of 1946. Recently, sixty-seven years after his service, Norton was delighted to be invited to participate in a special recognition of former Bunker Hill crewmates in San Diego, California. Unfortunately, he was the only crewmate able to attend as others were unable to travel.

Norton was able to see the "old" Bunker Hill's bell that had been salvaged from the ship before it was decommissioned. It is proudly displayed in a prominent place aboard the "New" Bunker Hill. Each ship has a brass bell to provide signals to the crew periodically.

Included in Captain Mike Ford's personal invitation were many experiences that Norton and his family enjoyed thoroughly. "It was the experience of a lifetime," said Norton. His invitation was a six-day experience, including tours with VIPs of all aspects of the ships. He enjoyed a banquet where he was introduced and seated next to the Captain. The Captain was highly conversational and accommodating.

Norton's wife Dorothy, son Dennis and his wife Carol, and daughter Cindy were there. They were awed by the hospitality and many events they attended both on shipboard and in the city of San Diego. Captain Ford had arranged all the festivities including a complete tour of the new ship, USS Carl Vinson and the "New" USS Bunker Hill.

USS Bunker Hill (CV/CVA/CVS-17, AVT-9)
... was one of the 24 Essex-class aircraft carriers build during World War II for the United States Navy. The ship, the second US Navy ship to bear the name, was named for the Battle of Bunker Hill [fought during the Revolutionary War]. Bunker Hill was commissioned in May 1943, and served in several campaigns in the Pacific Theater of Operations, earning eleven battle stars and a Presidential Unit Citation. She was badly damaged in May 1945, becoming one of the most damaged carriers to survive the war.

After the attack she returned to the U.S. mainland for repairs and was decommissioned in 1947. While in reserve she was reclassified as an attack carrier (CVA), then an antisubmarine carrier (CVS), and finally an Auxiliary Landing Training Ship (AVT), but was never modernized and never saw active service again. Bunker Hill and Franklin were the only Essex-class ships never recommissioned after World War II.

Stricken from the Naval Vessel Register in 1966, she served as an electronics test platform for many years in San Diego Bay, and was sold for scrap in 1973. An effort to save her as a museum ship in 1972 was unsuccessful.

Post-War
In September, Bunker Hill reported for duty with the Operation Magic Carpet fleet, returning veterans from the Pacific. She remained on this duty as a unit of TG 16.12 until January 1946, when she was ordered to Bremerton for deactivation. She was decommissioned into reserve on 9 January 1947.

A stationary electronics test platform, 1967
While she was laid up in mothballs, she was reclassified three times, becoming the CVA - 17 in October 1951, CVS - 17 in August 1953, and AVT - 9 in May 1959, with the latter designation indicating that any future commissioned operations would be as an "Auxiliary Aircraft Landing Training Ship." As all Essex-class carriers survived the war, the peacetime U.S. Navy had no need for the use of Bunker Hill. She and the Franklin, which also had sustained severe damage from an aerial attack, were the only aircraft carriers in the Essex-class that did not experience any active duty after the end of World War II, despite their being repaired. Stricken from the Naval Vessel Register in November 1966, the Bunker Hill was used as a stationary electronics test platform at the Naval Air Station North Island, San Diego, during the 1960s and early 1970s.

The USS Bunker Hill was sold for scrapping in May 1973.