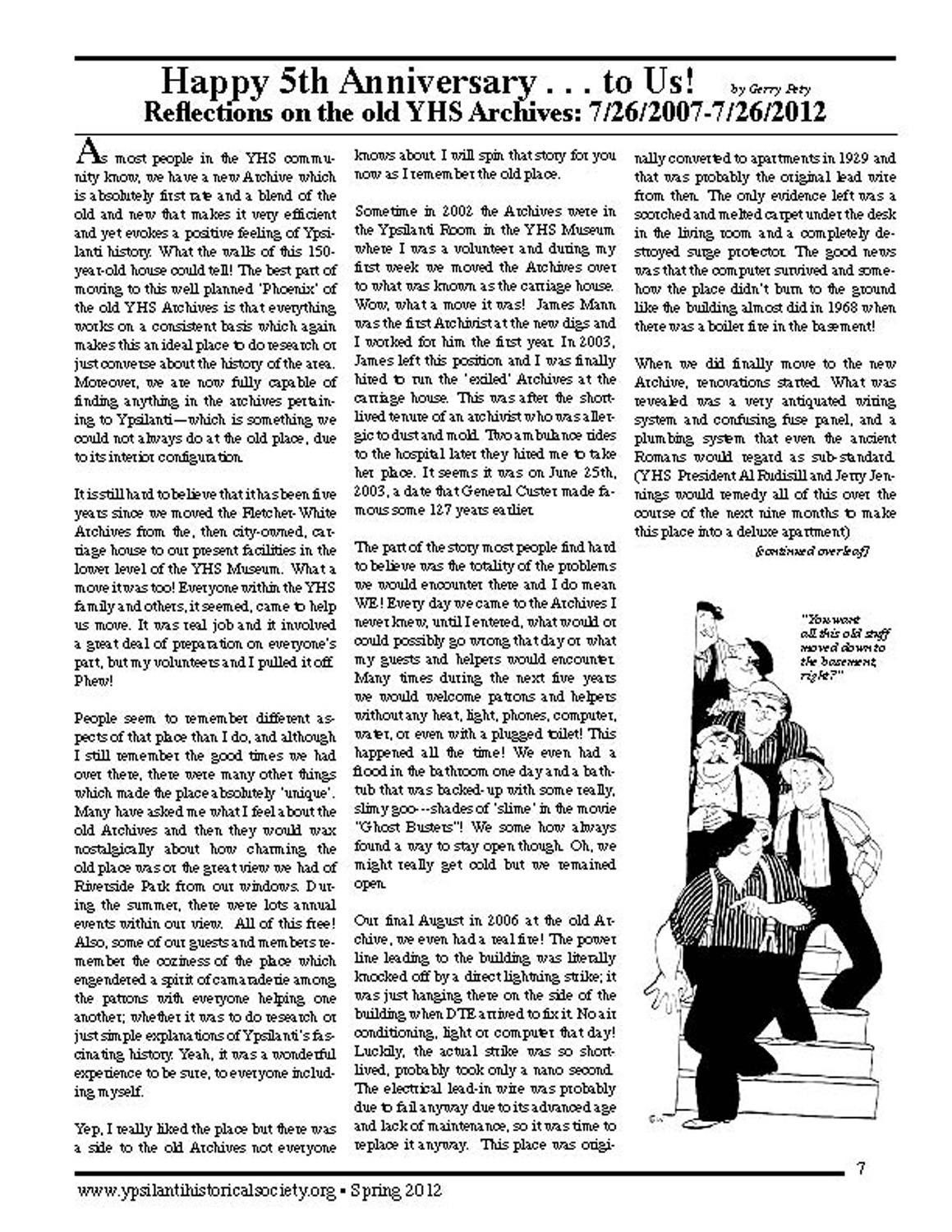 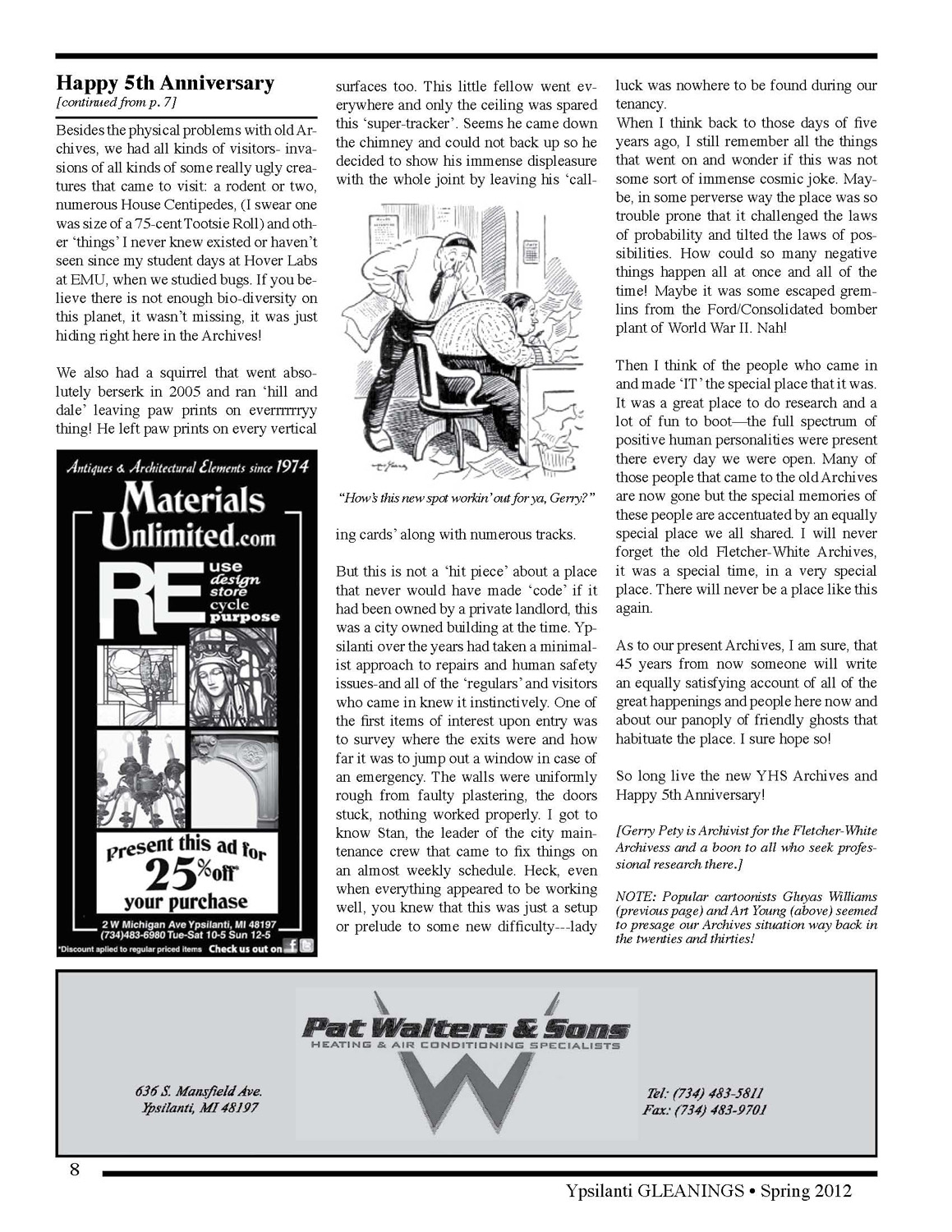 As most people in the YHS community know, we have a new Archive which is absolutely first rate and a blend of the old and new that makes it very efficient and yet evokes a positive feeling on Ypsilanti history. What the walls of this 150-year-old house could tell! The best part of moving to this well-planned 'Phoenix' of the old YHS Archives is that everything works on a consistent basis which again makes this an ideal place to do research or just converse about the history or the area. Moreover, we are now fully capable of finding anything in the archives pertaining to Ypsilanti - which is something we could not always do at the old place, due to its interior configuration.

It is still hard to believe that it has been five years since we moved the Fletcher-White Archives from the, then city-owned, carriage house to our new present facilities in the lower level of the YHS Museum. What a move it was too! Everyone within the YHS family and others, it seemed, came to help us move. It was a real job and it involved a great deal of preparation on everyone's part, but my volunteers and I pulled it off. Phew!

People seem to remember different aspects of that place than I do, and although I still remember the good times we had over there, there were many other things which made the place absolutely 'unique'. Many have asked me what I feel about the old Archives and then they would wax nostalgically about how charming the old place was or the great view we had of Riverside Park from our windows. During the summer, there were lots of annual events within our view. All of this free! Also, some of our guests and members remember the coziness of the place which engendered a a spirit of camaraderie among the patrons with everyone helping one another; whether it was to do research or just simple explanations of Ypsilanti's fascinating history. Yeah, it was a wonderful experience to be sure, to everyone including myself.

Yep, I really liked the place but there was a side to the old Archives not everyone knows about. I will spin that story for you now as I remember the old place.

Sometime in 2002 the Archives were in the Ypsilanti Room in the YHS Museum where I was a volunteer and during my first week we moved the Archives over to what was known as the carriage house. Wow, what a move it was! James Mann was the first Archivist at the new digs and I worked for him the first year. In 2003 James left this position and I was finally hired to run the 'exiled' Archives at the carriage house. This was after the short-lived tenure of an archivist who was allergic to dust and mold. Two ambulance rides to the hospital later they hired me to take her place. It seems it was on June 25th, 2003, a date that General Custer made famous some 127 years earlier.

The part of the story most people find hard to believe was that totality of the problems we would encounter there and I do mean WE! Every day we came to the Archives I never knew, until I entered, what would or could possibly go wrong that day or what my guests and helpers would encounter. Many times during the next five years we would welcome patrons and helpers without any heat, light, phones, computer, water, or even with a plugged toilet! This happened all the time! We even had a flood in the bathroom one day and a bathtub that was backed-up with some really, slimy goo---shades of 'slime' in the movie "Ghost Busters"! We some how always found a way to stay open though. Oh, we might get really cold, but we remained open.

Our final August in 2006 at the old Archive, we even had a real fire! The power line leading to the building was literally knocked off by a direct lightning strike; it was just hanging there on the side of the building when DTE arrived to fix it. No air conditioning, light or computer that day! Luckily, the actual strike was so short-lived, probably only took a nano second. The electrical lead-in wire was probably due to fail anyway due to its advanced age and lack of maintenance, so it was time to replace it anyway. This place was originally converted to apartments in 1929 and that was probably the original lead wire from then. The only evidence left was a scorched and melted carpet under the desk in the living room and a completely destroyed surge protector. The good news was that the computer survived and somehow the place didn't burn to the ground like the building almost did in 1968 when there was a boiler fire in the basement!

When we did finally move to the new Archive, renovations started. What was revealed was a very antiquated wiring system and confusing fuse panel, and a plumbing system that even the ancient Romans would regard as sub-standard. (YHS President Al Rudisill and Jerry Jennings would remedy all of this over the course of the next nine months to make this place into a deluxe apartment). Besides the physical problems with the old Archives, we had all kinds of visitors- invasions of all kinds of some really ugly creatures that came to visit: a rodent or two, numerous House Centipedes, (I swear one was size of a 75-cent Tootsie Roll) and other 'things' I never knew existed or haven't seen since my student days at Hover Labs at EMU, when we studied bugs. If you believe there is not enough bio-diversity on this planet, is wasn't missing, it was just hiding right here in the Archives!

We also had a squirrel that went absolutely beserk in 2005 and ran 'hill and dale' leaving paw prints on everrrrrryything! He left paw prints on every vertical surfaces too. This little fellow went everywhere and only the ceiling was spared this 'super-tracker'. Seems he came down the chimney and could not back up so he decided to show his immense displeasure with the whole joint by leaving his 'calling cards' along with numerous tracks.

But this is not a 'hit piece' about a place that never would have made 'code' if it had been owned by a private landlord, this was a city owned building at the time. Ypsilanti over the years had taken a minimalist approach to repairs and human safety issues - and all of the 'regulars' and visitors who came in knew it instinctively. One of the first items of interest upon entry was to survey where the exits were and how far it was to jump out a window in case of an emergency. The walls were uniformly rough from faulty plastering, the doors stuck, nothing worked properly. I got to know Stan, the leader of the city maintenance crew that came to fix things on an almost weekly schedule. Heck, even when everything appeared to be working well, you knew that this was just a setup or prelude to some new difficulty---lady luck was nowhere to be found during our tenancy.

When I think back to those days of five years ago, I still remember all the things that went on and wonder if this was not some sort of immense cosmic joke. Maybe, in some perverse way the place was so trouble prone that it challenged the laws of possibilities. How could so many negative things happen all at once and all of the time! Maybe it was some escaped gremlins from the Ford/Consolidated bomber plant of World War II. Nah!

Then I think of the people and made 'IT' the special place that it was. It was a great place to do research and a lot of fun to boot - the full spectrum of positive human personalities were present there every day we were open. Many of those people that came to the old Archives are now gone but the special memories of these people are accentuated by an equally special place we all shared. I will never forget the old Fletcher-White Archives, it was a special time, in a very special place. There will never be a place like this again.

As to our present Archives, I am sure, that 45 years from now someone will write an equally satisfying account of all of the great happenings and people here and now and about our panoply of friendly ghosts that habituate the place. I sure hope so!

So long live the YHS Archives and Happy 5th Anniversary!

[Gerry Pety is Archivist for the Fletcher-White Archives and a boon to all who seek professional research there.]