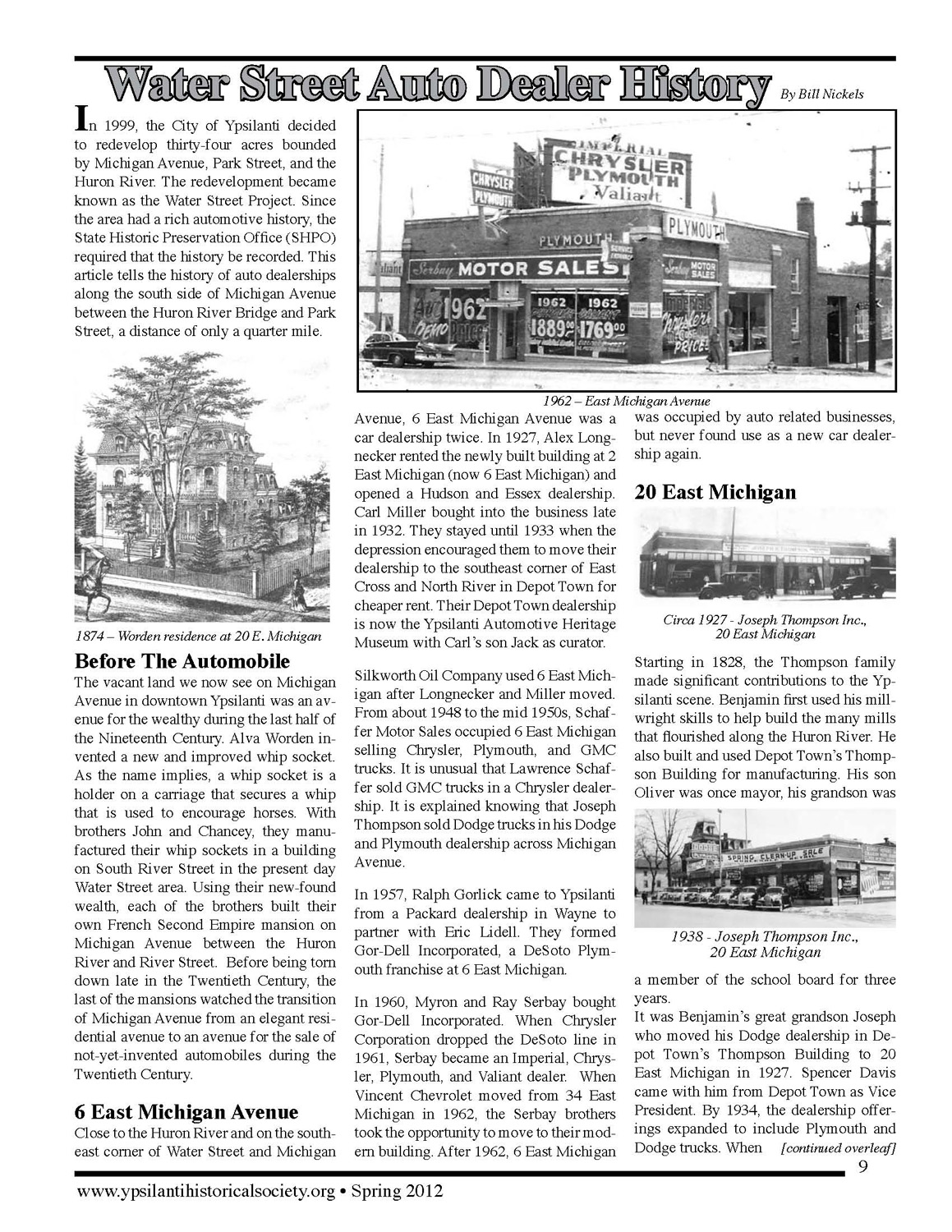 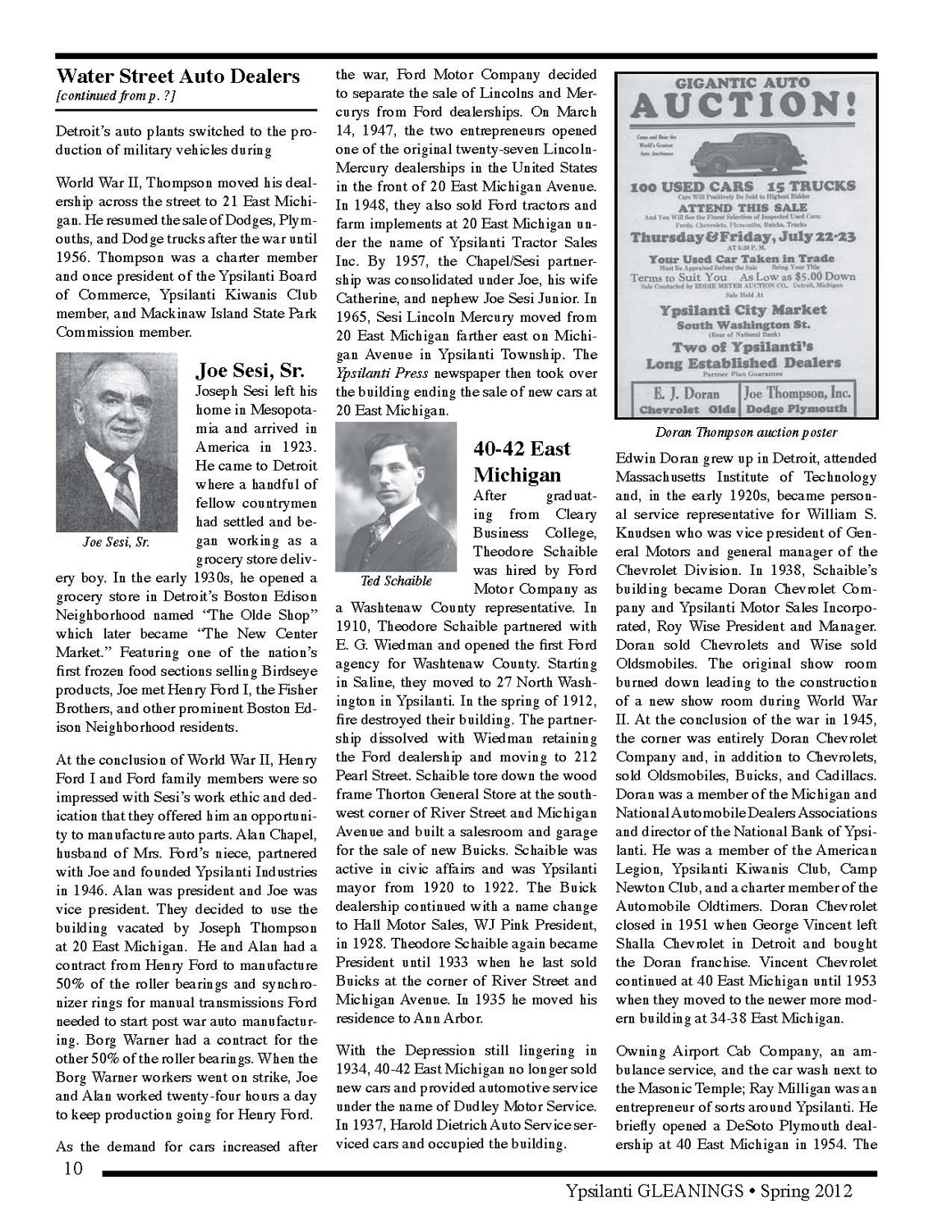 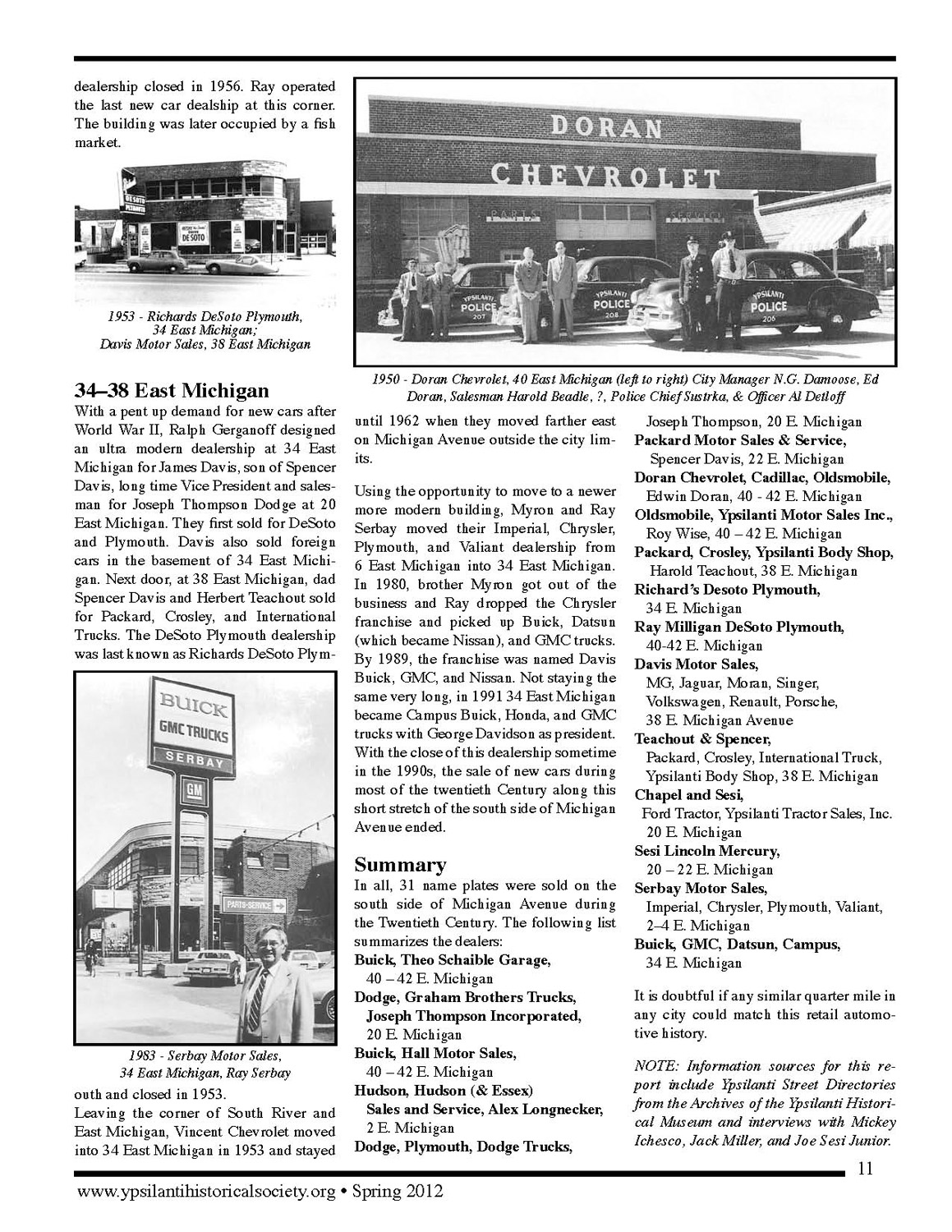 In 1999, the City of Ypsilanti decided to redevelop thirty-four acres bounded by Michigan Avenue, Park Street, and the Huron River. The redevelopment became known as the Water Street Project. Since the area had a rich automotive history, the State Historic Preservation Office (SHPO) required that the history be recorded. This article tells the history of auto dealerships along the south side of Michigan Avenue between the Huron River Bridge and Park Street, a distance of only a quarter mile.

The vacant land we now see on Michigan Avenue in downtown Ypsilanti was an avenue for the wealthy during the last half of the Nineteenth Century. Alva Worden invented a new and improved whip socket. As the name implies, a whip socket is a holder on a carriage that secures a whip that is used to encourage horses. With brothers John and Chancey, they manufactured their whip sockets in a building on South River Street in the present day Water Street area. Using their new-found wealth, each of the brothers built their own French Second Empire mansion on Michigan Avenue between the Huron River and River Street. Before being torn down late in the Twentieth Century, the last of the mansions watched the transition of Michigan Avenue from an elegant residential avenue to an avenue for the sale of not-yet-invented automobiles during the Twentieth Century.

Close to the Huron River and on the southeast corner of Water Street and Michigan Avenue, 6 East Michigan Avenue was a car dealership twice. In 1927, Alex Longnecker rented the newly built building at 2 East Michigan (now 6 East Michigan) and opened a Hudson and Essex dealership. Carl Miller bought into the business late in 1932. They stayed until 1933 when the depression encouraged them to move their dealership to the southeast corner of East Cross and North River in Depot Town for cheaper rent. Their Depot Town dealership is now the Ypsilanti Automotive Heritage Museum with Carl’s son Jack as curator. Silkworth Oil Company used 6 East Michigan after Longnecker and Miller moved. From about 1948 to the mid 1950s, Schaffer Motor Sales occupied 6 East Michigan selling Chrysler, Plymouth, and GMC trucks. It is unusual that Lawrence Schaffer sold GMC trucks in a Chrysler dealership. It is explained knowing that Joseph Thompson sold Dodge trucks in his Dodge and Plymouth dealership across Michigan Avenue.

In 1957, Ralph Gorlick came to Ypsilanti from a Packard dealership in Wayne to partner with Eric Lidell. They formed Gor-Dell Incorporated, a DeSoto Plymouth franchise at 6 East Michigan.

In 1960, Myron and Ray Serbay bought Gor-Dell Incorporated. When Chrysler Corporation dropped the DeSoto line in 1961, Serbay became an Imperial, Chrysler, Plymouth, and Valiant dealer. When Vincent Chevrolet moved from 34 East Michigan in 1962, the Serbay brothers took the opportunity to move to their modern building. After 1962, 6 East Michigan was occupied by auto related businesses, but never found use as a new car dealership again.

Starting in 1828, the Thompson family made significant contributions to the Ypsilanti scene. Benjamin first used his millwright skills to help build the many mills that flourished along the Huron River. He Detroit’s auto plants switched to the production of military vehicles during World War II, Thompson moved his dealership across the street to 21 East Michigan. He resumed the sale of Dodges, Plymouths, and Dodge trucks after the war until 1956. Thompson was a charter member and once president of the Ypsilanti Board of Commerce, Ypsilanti Kiwanis Club member, and Mackinaw Island State Park Commission member.

Joseph Sesi left his home in Mesopotamia and arrived in America in 1923. He came to Detroit where a handful of fellow countrymen had settled and began working as a grocery store delivery boy. In the early 1930s, he opened a grocery store in Detroit’s Boston Edison Neighborhood named “The Olde Shop” which later became “The New Center Market.” Featuring one of the nation’s first frozen food sections selling Birdseye products, Joe met Henry Ford I, the Fisher Brothers, and other prominent Boston Edison Neighborhood residents.

At the conclusion of World War II, Henry Ford I and Ford family members were so impressed with Sesi’s work ethic and dedication that they offered him an opportunity to manufacture auto parts. Alan Chapel, husband of Mrs. Ford’s niece, partnered with Joe and founded Ypsilanti Industries in 1946. Alan was president and Joe was vice president. They decided to use the building vacated by Joseph Thompson at 20 East Michigan. He and Alan had a contract from Henry Ford to manufacture 50% of the roller bearings and synchronizer rings for manual transmissions Ford needed to start post war auto manufacturing. Borg Warner had a contract for the other 50% of the roller bearings. When the Borg Warner workers went on strike, Joe and Alan worked twenty-four hours a day to keep production going for Henry Ford.

As the demand for cars increased after the war, Ford Motor Company decided to separate the sale of Lincolns and Mercurys from Ford dealerships. On March 14, 1947, the two entrepreneurs opened one of the original twenty-seven LincolnMercury dealerships in the United States in the front of 20 East Michigan Avenue. In 1948, they also sold Ford tractors and farm implements at 20 East Michigan under the name of Ypsilanti Tractor Sales Inc. By 1957, the Chapel/Sesi partnership was consolidated under Joe, his wife Catherine, and nephew Joe Sesi Junior. In 1965, Sesi Lincoln Mercury moved from 20 East Michigan farther east on Michigan Avenue in Ypsilanti Township. The Ypsilanti Press newspaper then took over the building ending the sale of new cars at 20 East Michigan.

Michigan After graduating from Cleary Business College, Theodore Schaible was hired by Ford Motor Company as a Washtenaw County representative. In 1910, Theodore Schaible partnered with E. G. Wiedman and opened the first Ford agency for Washtenaw County. Starting in Saline, they moved to 27 North Washington in Ypsilanti. In the spring of 1912, fire destroyed their building. The partnership dissolved with Wiedman retaining the Ford dealership and moving to 212 Pearl Street. Schaible tore down the wood frame Thorton General Store at the southwest corner of River Street and Michigan Avenue and built a salesroom and garage for the sale of new Buicks. Schaible was active in civic affairs and was Ypsilanti mayor from 1920 to 1922. The Buick dealership continued with a name change to Hall Motor Sales, WJ Pink President, in 1928. Theodore Schaible again became President until 1933 when he last sold Buicks at the corner of River Street and Michigan Avenue. In 1935 he moved his residence to Ann Arbor.

With the Depression still lingering in 1934, 40-42 East Michigan no longer sold new cars and provided automotive service under the name of Dudley Motor Service. In 1937, Harold Dietrich Auto Service serviced cars and occupied the building. Edwin Doran grew up in Detroit, attended Massachusetts Institute of Technology and, in the early 1920s, became personal service representative for William S. Knudsen who was vice president of General Motors and general manager of the Chevrolet Division. In 1938, Schaible’s building became Doran Chevrolet Company and Ypsilanti Motor Sales Incorporated, Roy Wise President and Manager. Doran sold Chevrolets and Wise sold Oldsmobiles. The original show room burned down leading to the construction of a new show room during World War II. At the conclusion of the war in 1945, the corner was entirely Doran Chevrolet Company and, in addition to Chevrolets, sold Oldsmobiles, Buicks, and Cadillacs. Doran was a member of the Michigan and National Automobile Dealers Associations and director of the National Bank of Ypsilanti. He was a member of the American Legion, Ypsilanti Kiwanis Club, Camp Newton Club, and a charter member of the Automobile Oldtimers. Doran Chevrolet closed in 1951 when George Vincent left Shalla Chevrolet in Detroit and bought the Doran franchise. Vincent Chevrolet continued at 40 East Michigan until 1953 when they moved to the newer more modern building at 34-38 East Michigan.

Owning Airport Cab Company, an ambulance service, and the car wash next to the Masonic Temple; Ray Milligan was an entrepreneur of sorts around Ypsilanti. He briefly opened a DeSoto Plymouth dealership at 40 East Michigan in 1954. The also built and used Depot Town’s Thompson Building for manufacturing. His son Oliver was once mayor, his grandson was a member of the school board for three years.

It was Benjamin’s great grandson Joseph who moved his Dodge dealership in Depot Town’s Thompson Building to 20 East Michigan in 1927. Spencer Davis came with him from Depot Town as Vice President. By 1934, the dealership offerings expanded to include Plymouth and Dodge trucks. When dealership closed in 1956. Ray operated the last new car dealship at this corner. The building was later occupied by a fish market.

Using the opportunity to move to a newer more modern building, Myron and Ray Serbay moved their Imperial, Chrysler, Plymouth, and Valiant dealership from 6 East Michigan into 34 East Michigan. In 1980, brother Myron got out of the business and Ray dropped the Chrysler franchise and picked up Buick, Datsun (which became Nissan), and GMC trucks. By 1989, the franchise was named Davis Buick, GMC, and Nissan. Not staying the same very long, in 1991 34 East Michigan became Campus Buick, Honda, and GMC trucks with George Davidson as president. With the close of this dealership sometime in the 1990s, the sale of new cars during most of the twentieth Century along this short stretch of the south side of Michigan Avenue ended.