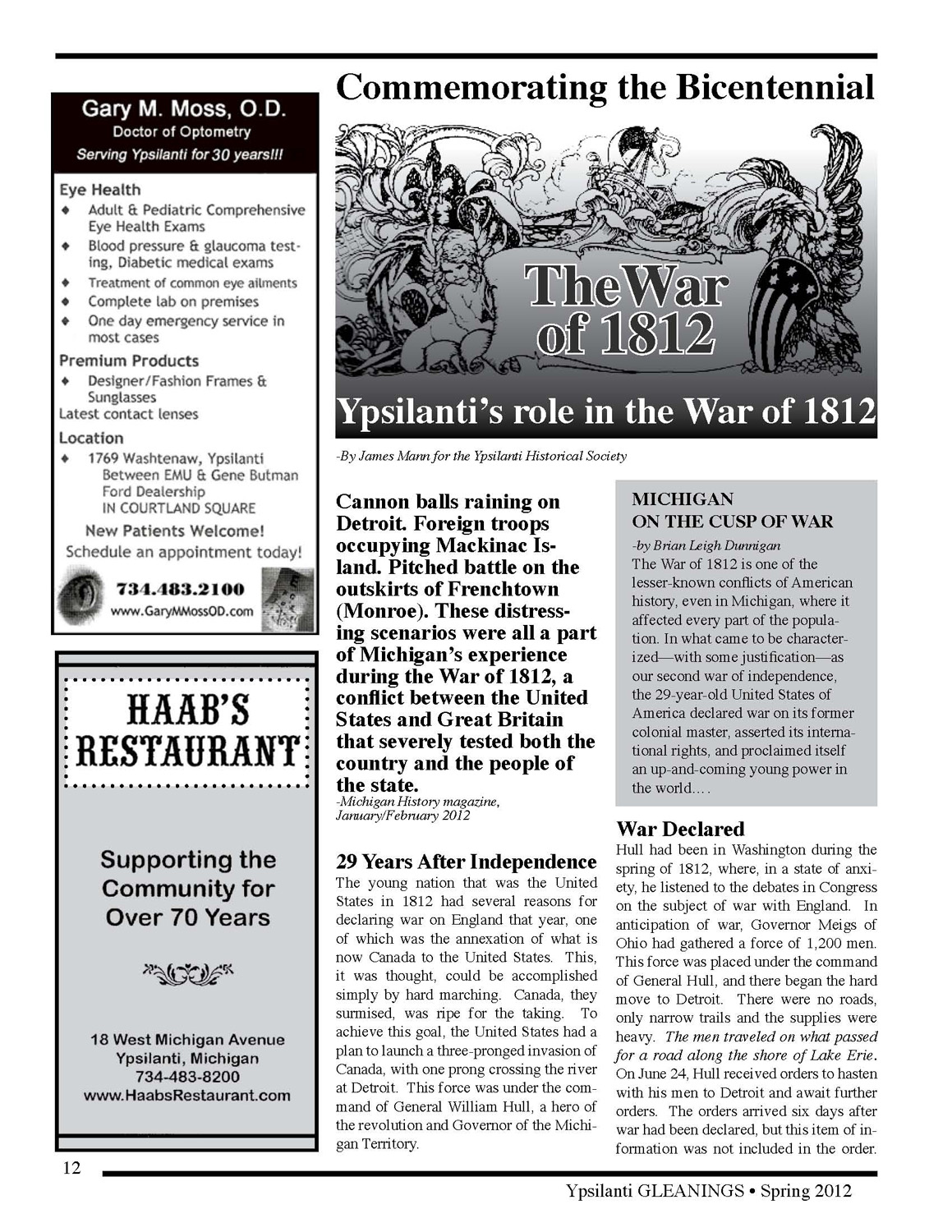 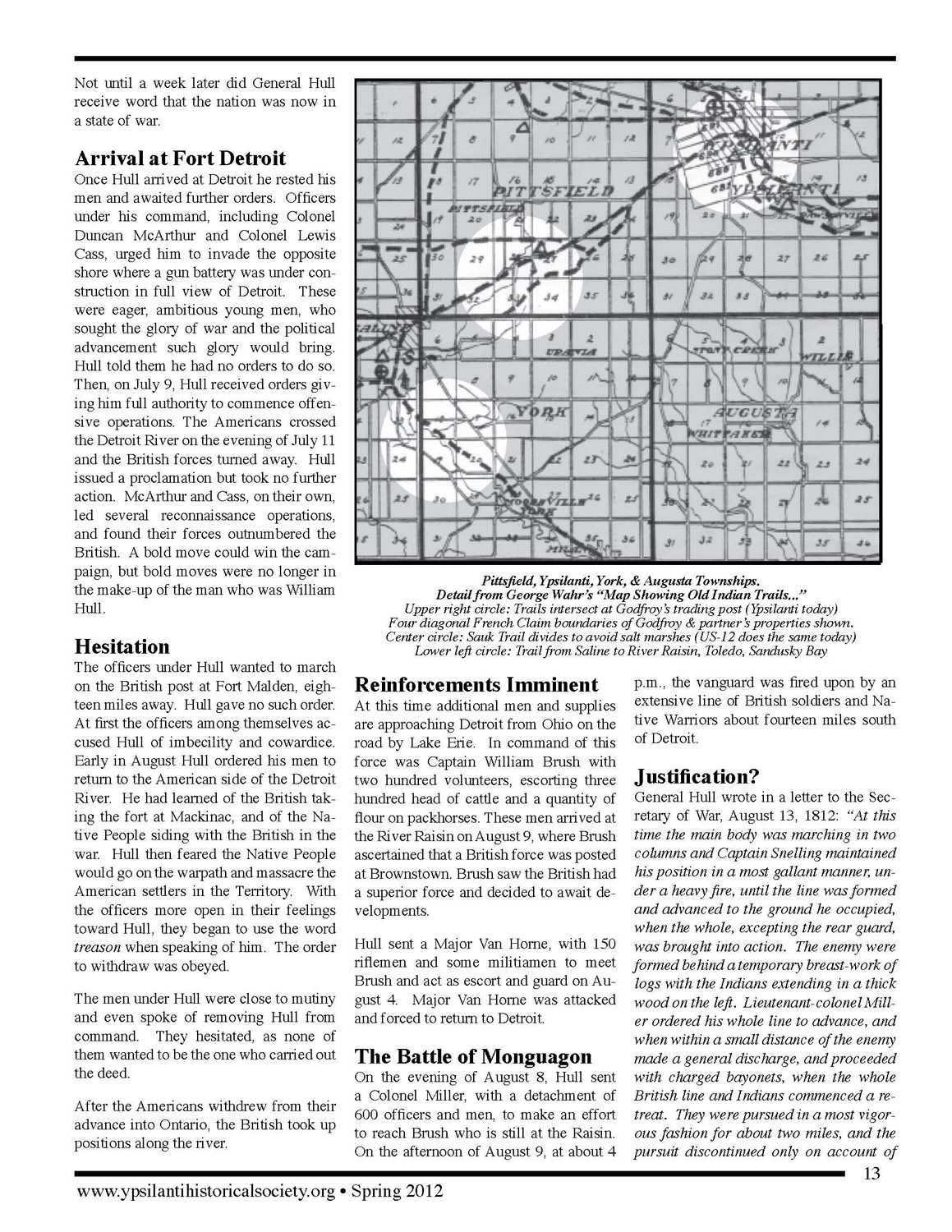 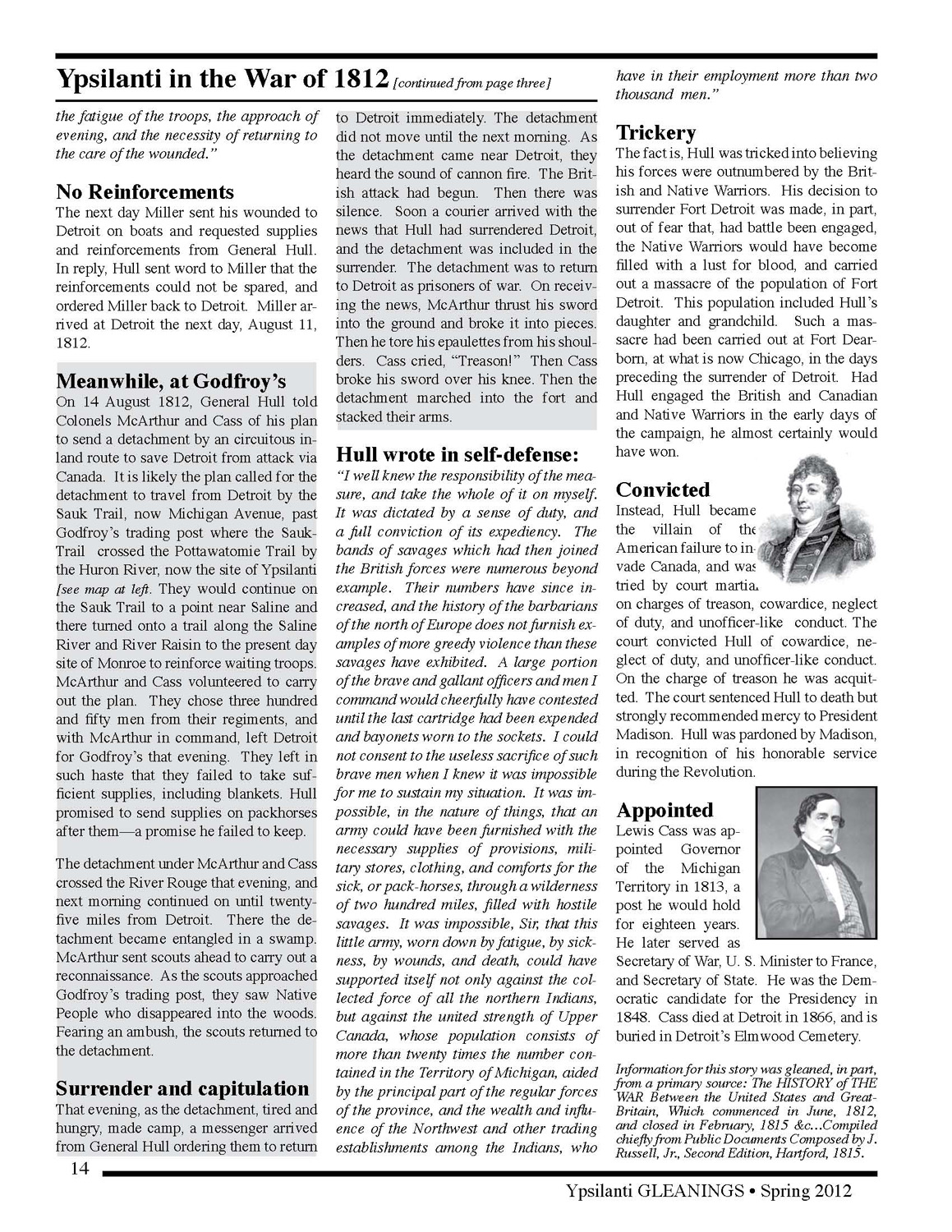 Cannon balls raining on Detroit. Foreign troops occupying Mackinac Island. Pitched battle on the outskirts of Frenchtown (Monroe). These distressing scenarios were all a part of Michigan’s experience during the War of 1812, a conflict between the United States and Great Britain that severely tested both the country and the people of the state. -Michigan History magazine, January/February 2012

29 Years After Independence The young nation that was the United States in 1812 had several reasons for declaring war on England that year, one of which was the annexation of what is now Canada to the United States. This, it was thought, could be accomplished simply by hard marching. Canada, they surmised, was ripe for the taking. To achieve this goal, the United States had a plan to launch a three-pronged invasion of Canada, with one prong crossing the river at Detroit. This force was under the command of General William Hull, a hero of the revolution and Governor of the Michigan Territory. War Declared

Hull had been in Washington during the spring of 1812, where, in a state of anxiety, he listened to the debates in Congress on the subject of war with England. In anticipation of war, Governor Meigs of Ohio had gathered a force of 1,200 men. This force was placed under the command of General Hull, and there began the hard move to Detroit. There were no roads, only narrow trails and the supplies were heavy. The men traveled on what passed for a road along the shore of Lake Erie. On June 24, Hull received orders to hasten with his men to Detroit and await further orders. The orders arrived six days after war had been declared, but this item of information was not included in the order. Not until a week later did General Hull receive word that the nation was now in a state of war.

Once Hull arrived at Detroit he rested his men and awaited further orders. Officers under his command, including Colonel Duncan McArthur and Colonel Lewis Cass, urged him to invade the opposite shore where a gun battery was under construction in full view of Detroit. These were eager, ambitious young men, who sought the glory of war and the political advancement such glory would bring. Hull told them he had no orders to do so. Then, on July 9, Hull received orders giving him full authority to commence offensive operations. The Americans crossed the Detroit River on the evening of July 11 and the British forces turned away. Hull issued a proclamation but took no further action. McArthur and Cass, on their own, led several reconnaissance operations, and found their forces outnumbered the British. A bold move could win the campaign, but bold moves were no longer in the make-up of the man who was William Hull.

The officers under Hull wanted to march on the British post at Fort Malden, eighteen miles away. Hull gave no such order. At first the officers among themselves accused Hull of imbecility and cowardice. Early in August Hull ordered his men to return to the American side of the Detroit River. He had learned of the British taking the fort at Mackinac, and of the Native People siding with the British in the war. Hull then feared the Native People would go on the warpath and massacre the American settlers in the Territory. With the officers more open in their feelings toward Hull, they began to use the word treason when speaking of him. The order to withdraw was obeyed. The men under Hull were close to mutiny and even spoke of removing Hull from command. They hesitated, as none of them wanted to be the one who carried out the deed. After the Americans withdrew from their advance into Ontario, the British took up positions across the river.

Reinforcements Imminent At this time additional men and supplies are approaching Detroit from Ohio on the road by Lake Erie. In command of this force was Captain William Brush with two hundred volunteers, escorting three hundred head of cattle and a quantity of flour on packhorses. These men arrived at the River Raisin on August 9, where Brush ascertained that a British force was posted at Brownstown. Brush saw the British had a superior force and decided to await developments. Hull sent a Major Van Horne, with 150 riflemen and some militiamen to meet Brush and act as escort and guard on August 4. Major Van Horne was attacked and forced to return to Detroit. The Battle of Monguagon On the evening of August 8, Hull sent a Colonel Miller, with a detachment of 600 officers and men, to make an effort to reach Brush who is still at the Raisin. On the afternoon of August 9, at about 4 p.m., the vanguard was fired upon by an extensive line of British soldiers and Native Warriors about fourteen miles south of Detroit.

General Hull wrote in a letter to the Secretary of War, August 13, 1812: “At this time the main body was marching in two columns and Captain Snelling maintained his position in a most gallant manner, under a heavy fire, until the line was formed and advanced to the ground he occupied, when the whole, excepting the rear guard, was brought into action. The enemy were formed behind a temporary breast-work of logs with the Indians extending in a thick wood on the left. Lieutenant-colonel Miller ordered his whole line to advance, and when within a small distance of the enemy made a general discharge, and proceeded with charged bayonets, when the whole British line and Indians commenced a retreat. They were pursued in a most vigorous fashion for about two miles, and the pursuit discontinued only on an account of the fatigue of the troops, the approach of evening, and the necessity of returning to the care of the wounded.”

The next day Miller sent his wounded to Detroit on boats and requested supplies and reinforcements from General Hull. In reply, Hull sent word to Miller that the reinforcements could not be spared, and ordered Miller back to Detroit. Miller arrived at Detroit the next day, August 11, 1812.

Meanwhile, at Godfroy’s On 14 August 1812, General Hull told Colonels McArthur and Cass of his plan to send a detachment by an circuitous inland route to save Detroit from attack via Canada. It is likely the plan called for the detachment to travel from Detroit by the Sauk Trail, now Michigan Avenue, past Godfroy’s trading post where the SaukTrail crossed the Pottawatomie Trail by the Huron River, now the site of Ypsilanti [see map at left. They would continue on the Sauk Trail to a point near Saline and there turned onto a trail along the Saline River and River Raisin to the present day site of Monroe to reinforce waiting troops. McArthur and Cass volunteered to carry out the plan. They chose three hundred and fifty men from their regiments, and with McArthur in command, left Detroit for Godfroy’s that evening. They left in such haste that they failed to take sufficient supplies, including blankets. Hull promised to send supplies on packhorses after them––a promise he failed to keep. The detachment under McArthur and Cass crossed the River Rouge that evening, and next morning continued on until twentyfive miles from Detroit. There the detachment became entangled in a swamp. McArthur sent scouts ahead to carry out a reconnaissance. As the scouts approached Godfroy’s trading post, they saw Native People who disappeared into the woods. Fearing an ambush, the scouts returned to the detachment.

That evening, as the detachment, tired and hungry, made camp, a messenger arrived from General Hull ordering them to return to Detroit immediately. The detachment did not move until the next morning. As the detachment came near Detroit, they heard the sound of cannon fire. The British attack had begun. Then there was silence. Soon a courier arrived with the news that Hull had surrendered Detroit, and the detachment was included in the surrender. The detachment was to return to Detroit as prisoners of war. On receiving the news, McArthur thrust his sword into the ground and broke it into pieces. Then he tore his epaulettes from his shoulders. Cass cried, “Treason!” Then Cass broke his sword over his knee. Then the detachment marched into the fort and stacked their arms.

Hull wrote in self-defense: “I well knew the responsibility of the measure, and take the whole of it on myself. It was dictated by a sense of duty, and a full conviction of its expediency. The bands of savages which had then joined the British forces were numerous beyond example. Their numbers have since increased, and the history of the barbarians of the north of Europe does not furnish examples of more greedy violence than these savages have exhibited. A large portion of the brave and gallant officers and men I command would cheerfully have contested until the last cartridge had been expended and bayonets worn to the sockets. I could not consent to the useless sacrifice of such brave men when I knew it was impossible for me to sustain my situation. It was impossible, in the nature of things, that an army could have been furnished with the necessary supplies of provisions, military stores, clothing, and comforts for the sick, or pack-horses, through a wilderness of two hundred miles, filled with hostile savages. It was impossible, Sir, that this little army, worn down by fatigue, by sickness, by wounds, and death, could have supported itself not only against the collected force of all the northern Indians, but against the united strength of Upper Canada, whose population consists of have in their employment more than two thousand men.” more than twenty times the number contained in the Territory of Michigan, aided by the principal part of the regular forces of the province, and the wealth and influence of the Northwest and other trading establishments among the Indians, who have in their employment more than two thousand men."

The fact is, Hull was tricked into believing his forces were outnumbered by the British and Native Warriors. His decision to surrender Fort Detroit was made, in part, out of fear that, had battle been engaged, the Native Warriors would have become filled with a lust for blood, and carried out a massacre of the population of Fort Detroit. This population included Hull’s daughter and grandchild. Such a massacre had been carried out at Fort Dearborn, at what is now Chicago, in the days preceding the surrender of Detroit. Had Hull engaged the British and Canadian and Native Warriors in the early days of the campaign, he almost certainly would have won.

Convicted Instead, Hull became the villain of the American failure to invade Canada, and was tried by court martial on charges of treason, cowardice, neglect of duty, and unofficer-like conduct. The court convicted Hull of cowardice, neglect of duty, and unofficer-like conduct. On the charge of treason he was acquitted. The court sentenced Hull to death but strongly recommended mercy to President Madison. Hull was pardoned by Madison, in recognition of his honorable service Appointed Lewis Cass was appointed Governor of the Michigan Territory in 1813, a post he would hold for eighteen years. He later served as Secretary of War, U. S. Minister to France, and Secretary of State. He was the Democratic candidate for the Presidency in 1848. Cass died at Detroit in 1866, and is buried in Detroit’s Elmwood Cemetery. Information for this story was gleaned, in part, from a primary source: The HISTORY of THE WAR Between the United States and GreatBritain, Which commenced in June, 1812, and closed in February, 1815 &c…Compiled chiefly from Public Documents Composed by J.