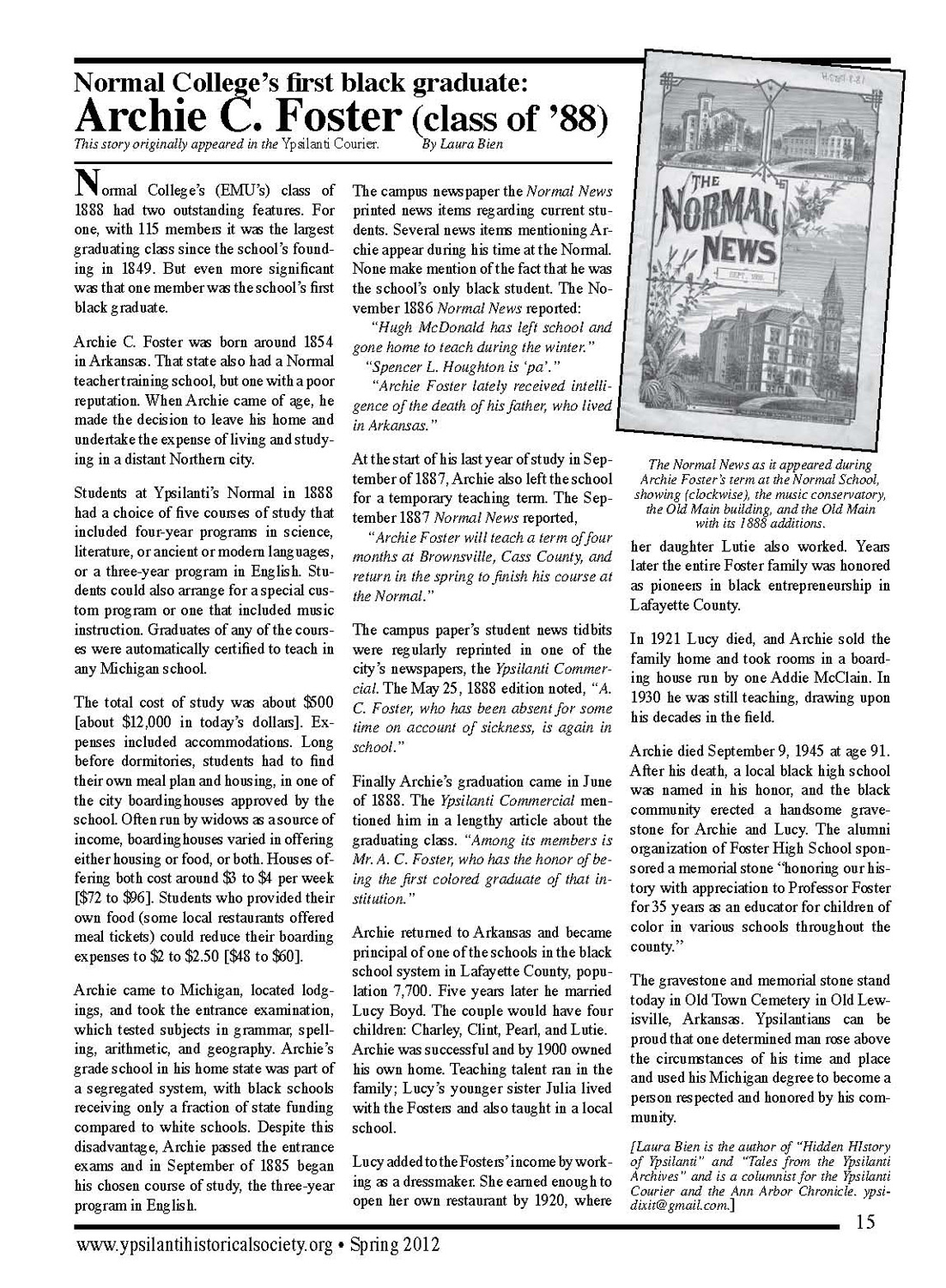 Normal College’s (EMU’s) class of 1888 had two outstanding features. For one, with 115 members it was the largest graduating class since the school’s founding in 1849. But even more significant was that one member was the school’s first black graduate.

Archie C. Foster was born around 1854 in Arkansas. That state also had a Normal teacher training school, but one with a poor reputation. When Archie came of age, he made the decision to leave his home and undertake the expense of living and studying in a distant Northern city.

Students at Ypsilanti’s Normal in 1888 had a choice of five courses of study that included four-year programs in science, literature, or ancient or modern languages, or a three-year program in English. Students could also arrange for a special custom program or one that included music instruction. Graduates of any of the courses were automatically certified to teach in any Michigan school.

The total cost of study was about $500 [about $12,000 in today’s dollars]. Expenses included accommodations. Long before dormitories, students had to find their own meal plan and housing, in one of the city boardinghouses approved by the school. Often run by widows as a source of income, boardinghouses varied in offering either housing or food, or both. Houses offering both cost around $3 to $4 per week [$72 to $96]. Students who provided their own food (some local restaurants offered meal tickets) could reduce their boarding expenses to $2 to $2.50 [$48 to $60].

Archie came to Michigan, located lodgings, and took the entrance examination, which tested subjects in grammar, spelling, arithmetic, and geography. Archie’s grade school in his home state was part of a segregated system, with black schools receiving only a fraction of state funding compared to white schools. Despite this disadvantage, Archie passed the entrance exams and in September of 1885 began his chosen course of study, the three-year program in English. The campus newspaper the Normal News printed news items regarding current students. Several news items mentioning Archie appear during his time at the Normal. None make mention of the fact that he was the school’s only black student. The November 1886 Normal News reported: “Hugh McDonald has left school and gone home to teach during the winter.” “Spencer L. Houghton is ‘pa’.” “Archie Foster lately received intelligence of the death of his father, who lived in Arkansas.”

At the start of his last year of study in September of 1887, Archie also left the school for a temporary teaching term. The September 1887 Normal News reported, “Archie Foster will teach a term of four months at Brownsville, Cass County, and return in the spring to finish his course at the Normal.” The campus paper’s student news tidbits were regularly reprinted in one of the city’s newspapers, the Ypsilanti Commercial. The May 25, 1888 edition noted, “A. C. Foster, who has been absent for some time on account of sickness, is again in school.”

Finally Archie’s graduation came in June of 1888. The Ypsilanti Commercial mentioned him in a lengthy article about the graduating class. “Among its members is Mr. A. C. Foster, who has the honor of being the first colored graduate of that institution.”

Archie returned to Arkansas and became principal of one of the schools in the black school system in Lafayette County, population 7,700. Five years later he married Lucy Boyd. The couple would have four children: Charley, Clint, Pearl, and Lutie. Archie was successful and by 1900 owned his own home. Teaching talent ran in the family; Lucy’s younger sister Julia lived with the Fosters and also taught in a local school.

Lucy added to the Fosters’ income by working as a dressmaker. She earned enough to open her own restaurant by 1920, where her daughter Lutie also worked. Years later the entire Foster family was honored as pioneers in black entrepreneurship in Lafayette County.

In 1921 Lucy died, and Archie sold the family home and took rooms in a boarding house run by one Addie McClain. In 1930 he was still teaching, drawing upon his decades in the field.

Archie died September 9, 1945 at age 91. After his death, a local black high school was named in his honor, and the black community erected a handsome gravestone for Archie and Lucy. The alumni organization of Foster High School sponsored a memorial stone “honoring our history with appreciation to Professor Foster for 35 years as an educator for children of color in various schools throughout the county.”

The gravestone and memorial stone stand today in Old Town Cemetery in Old Lewisville, Arkansas. Ypsilantians can be proud that one determined man rose above the circumstances of htime and place and used his Michigan degree to become a person respected and honored by his community.

[Laura Bien is the author of “Hidden HIstory of Ypsilanti” and “Tales from the Ypsilanti Archives” and is a columnist for the Ypsilanti Courier and the Ann Arbor Chronicle. ypsidixit@gmail.com