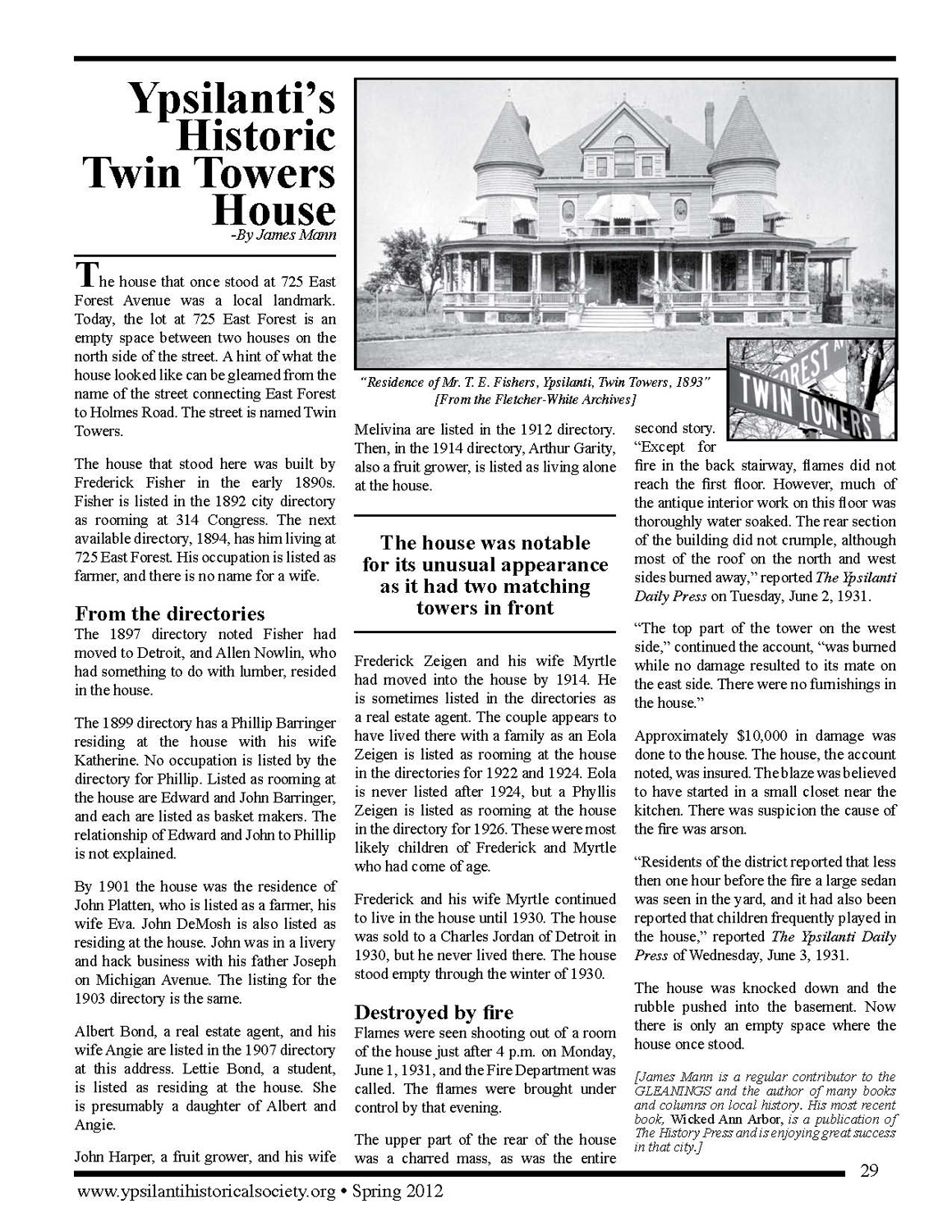 The house that stood here was built by Frederick Fisher in the early 1890s. Fisher is listed in the 1892 city directory as rooming at 314 Congress. The next available directory, 1894, has him living at 725 East Forest. His occupation is listed as farmer, and there is no name for a wife.

The 1897 directory noted Fisher had moved to Detroit, and Allen Nowlin, who had something to do with lumber, resided in the house. The 1899 directory has a Phillip Barringer residing at the house with his wife
Katherine. No occupation is listed by the directory for Phillip. Listed as rooming at the house are Edward and John Barringer, and each are listed as basket makers. The relationship of Edward and John to Phillip is not explained.

By 1901 the house was the residence of John Platten, who is listed as a farmer, his wife Eva. John DeMosh is also listed as residing at the house. John was in a livery and hack business with his father Joseph on Michigan Avenue. The listing for the 1903 directory is the same. Albert Bond, a real estate agent, and his wife Angie are listed in the 1907 directory at this address. Lettie Bond, a student, is listed as residing at the house. She is presumably a daughter of Albert and Angie. John Harper, a fruit grower, and his wife Melivina are listed in the 1912 directory. Then, in the 1914 directory, Arthur Garity, also a fruit grower, is listed as living alone at the house.

Flames were seen shooting out of a room of the house just after 4 p.m. on Monday, June 1, 1931, and the Fire Department was called. The flames were brought under control by that evening. The upper part of the rear of the house was a charred mass, as was the entire second story. “Except for fire in the back stairway, flames did not reach the first floor. However, much of the antique interior work on this floor was thoroughly water soaked. The rear section of the building did not crumple, although most of the roof on the north and west sides burned away,” reported The Ypsilanti Daily Press on Tuesday, June 2, 1931.

“The top part of the tower on the west side,” continued the account, “was burned while no damage resulted to its mate on the east side. There were no furnishings in the house.”Approximately $10,000 in damage was done to the house. The house, the account noted, was insured. The blaze was believed to have started in a small closet near the kitchen. There was suspicion the cause of the fire was arson.“Residents of the district reported that less then one hour before the fire a large sedan was seen in the yard, and it had also been reported that children frequently played in the house,” reported The Ypsilanti Daily Press of Wednesday, June 3, 1931.The house was knocked down and the rubble pushed into the basement. Now there is only an empty space where the house once stood.

[James Mann is a regular contributor to the GLEANINGS and the author of many books and columns on local history. His most recent book, Wicked Ann Arbor, is a publication of The History Press and is enjoying great success
in that city.]