A Cow For The Ages 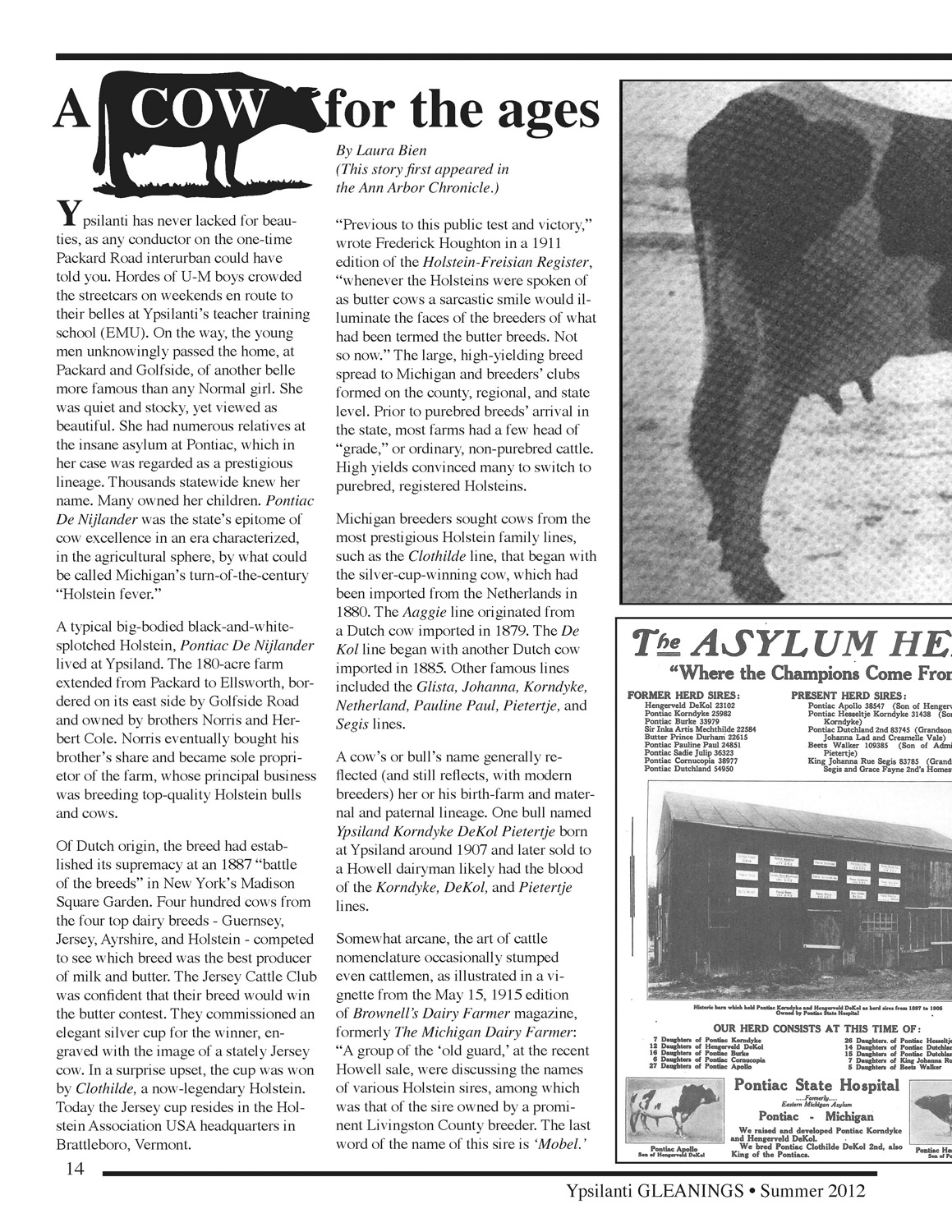 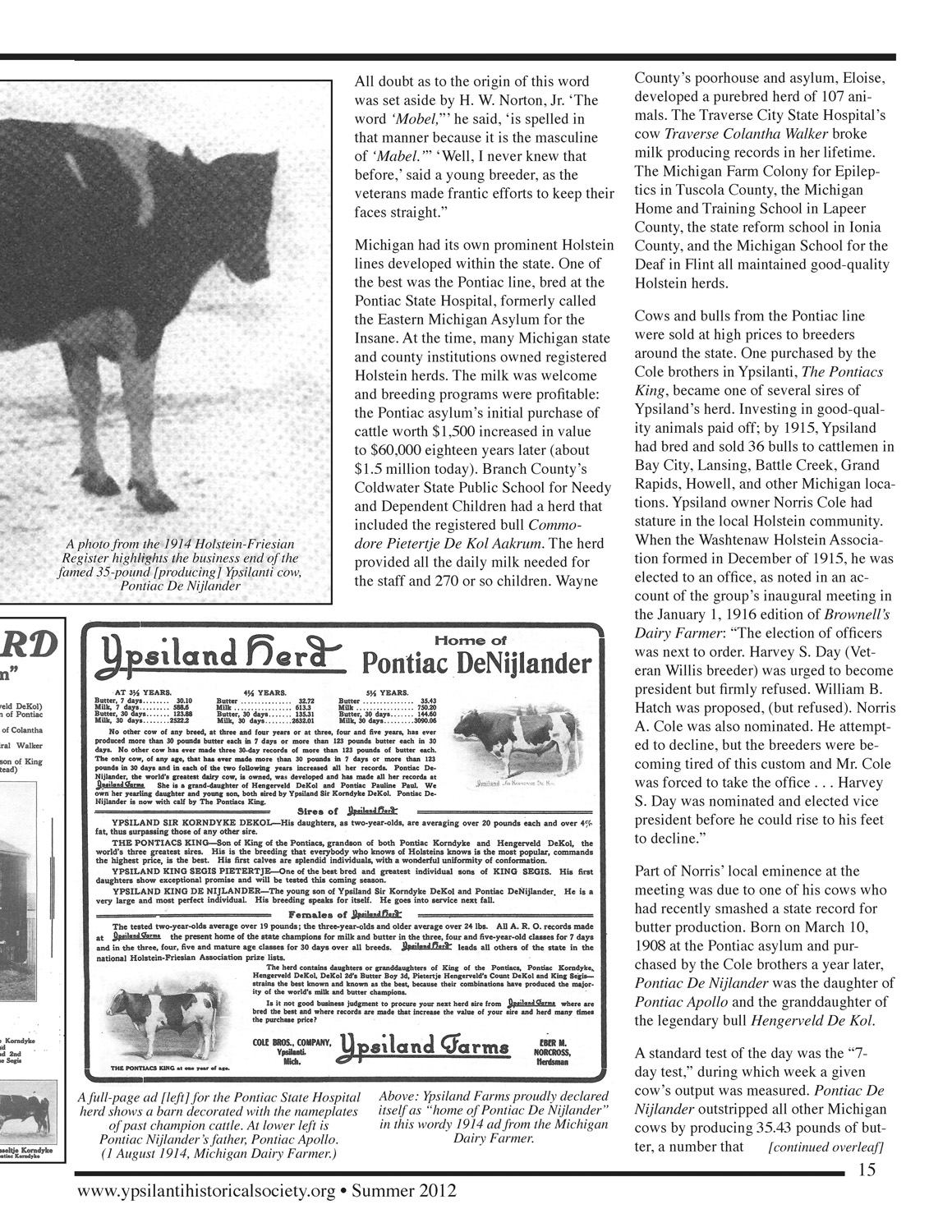 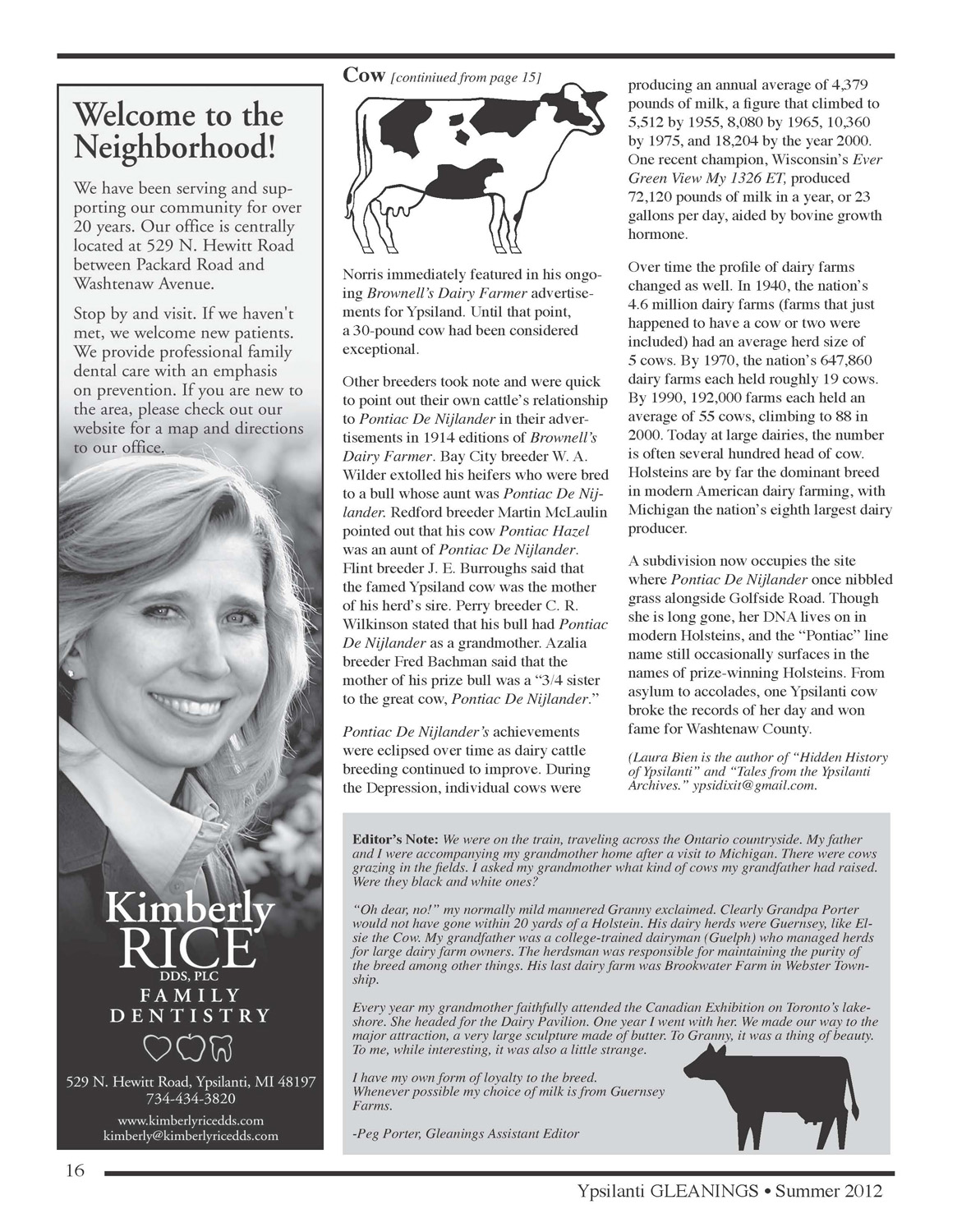 (This story first appeared in the Ann Arbor Chronicle.)

Ypsilanti has never lacked for beauties, as any conductor on the one-time Packard Road interurban could have told you. Hordes of U-M boys crowded the streetcars on weekends en route to their belles at Ypsilanti’s teacher training school (EMU). On the way, the young men unknowingly passed the home, at Packard and Golfside, of another belle more famous than any Normal girl. She was quiet and stocky, yet viewed as beautiful. She had numerous relatives at the insane asylum at Pontiac, which in her case was regarded as a prestigious lineage. Thousands statewide knew her name. Many owned her children. Pontiac De Nijlander was the state’s epitome of cow excellence in an era characterized, in the agricultural sphere, by what could be called Michigan’s turn-of-the-century “Holstein fever.”

A typical big-bodied black-and-white- splotched Holstein, Pontiac De Nijlander lived at Ypsiland. The 180-acre farm extended from Packard to Ellsworth, bordered on its east side by Golfside Road and owned by brothers Norris and Herbert Cole. Norris eventually bought his brother’s share and became sole proprietor of the farm, whose principal business was breeding top-quality Holstein bulls and cows.

Of Dutch origin, the breed had established its supremacy at an 1887 “battle of the breeds” in New York’s Madison Square Garden. Four hundred cows from the four top dairy breeds - Guernsey, Jersey, Ayrshire, and Holstein - competed to see which breed was the best producer of milk and butter. The Jersey Cattle Club was confident that their breed would win the butter contest. They commissioned an elegant silver cup for the winner, engraved with the image of a stately Jersey cow. In a surprise upset, the cup was won by Clothilde, a now-legendary Holstein. Today the Jersey cup resides in the Holstein Association USA headquarters in Brattleboro, Vermont.

“Previous to this public test and victory,” wrote Frederick Houghton in a 1911 edition of the Holstein-Freisian Register, “whenever the Holsteins were spoken of as butter cows a sarcastic smile would illuminate the faces of the breeders of what had been termed the butter breeds. Not so now.” The large, high-yielding breed spread to Michigan and breeders’ clubs formed on the county, regional, and state level. Prior to purebred breeds’ arrival in the state, most farms had a few head of “grade,” or ordinary, non-purebred cattle. High yields convinced many to switch to purebred, registered Holsteins.

Michigan breeders sought cows from the most prestigious Holstein family lines, such as the Clothilde line, that began with the silver-cup-winning cow, which had been imported from the Netherlands in 1880. The Aaggie line originated from a Dutch cow imported in 1879. The De Kol line began with another Dutch cow imported in 1885. Other famous lines included the Glista, Johanna, Korndyke, Netherland, Pauline Paul, Pietertje, and Segis lines.

A cow’s or bull’s name generally reflected (and still reflects, with modern breeders) her or his birth-farm and maternal and paternal lineage. One bull named Ypsiland Korndyke DeKol Pietertje born at Ypsiland around 1907 and later sold to a Howell dairyman likely had the blood of the Korndyke, DeKol, and Pietertje lines.

Somewhat arcane, the art of cattle nomenclature occasionally stumped even cattlemen, as illustrated in a vignette from the May 15, 1915 edition of Brownell’s Dairy Farmer magazine, formerly The Michigan Dairy Farmer: “A group of the ‘old guard,’ at the recent Howell sale, were discussing the names of various Holstein sires, among which was that of the sire owned by a prominent Livingston County breeder. The last word of the name of this sire is ‘Mobel.’

All doubt as to the origin of this word was set aside by H. W. Norton, Jr. ‘The word ‘Mobel,”’ he said, ‘is spelled in that manner because it is the masculine of ‘Mabel.’” ‘Well, I never knew that before,’ said a young breeder, as the veterans made frantic efforts to keep their faces straight.”

Michigan had its own prominent Holstein lines developed within the state. One of the best was the Pontiac line, bred at the Pontiac State Hospital, formerly called the Eastern Michigan Asylum for the Insane. At the time, many Michigan state and county institutions owned registered Holstein herds. The milk was welcome and breeding programs were profitable: the Pontiac asylum’s initial purchase of cattle worth $1,500 increased in value to $60,000 eighteen years later (about $1.5 million today). Branch County’s Coldwater State Public School for Needy and Dependent Children had a herd that included the registered bull >em>Commodore Pietertje De Kol Aakrum. The herd provided all the daily milk needed for the staff and 270 or so children. Wayne County’s poorhouse and asylum, Eloise, developed a purebred herd of 107 animals. The Traverse City State Hospital’s cow Traverse Colantha Walker broke milk producing records in her lifetime. The Michigan Farm Colony for Epileptics in Tuscola County, the Michigan Home and Training School in Lapeer County, the state reform school in Ionia County, and the Michigan School for the Deaf in Flint all maintained good-quality Holstein herds.

Cows and bulls from the Pontiac line were sold at high prices to breeders around the state. One purchased by the Cole brothers in Ypsilanti, The Pontiacs King, became one of several sires of Ypsiland’s herd. Investing in good-quality animals paid off; by 1915, Ypsiland had bred and sold 36 bulls to cattlemen in Bay City, Lansing, Battle Creek, Grand Rapids, Howell, and other Michigan locations. Ypsiland owner Norris Cole had stature in the local Holstein community. When the Washtenaw Holstein Association formed in December of 1915, he was elected to an office, as noted in an account of the group’s inaugural meeting in the January 1, 1916 edition of Brownell’s Dairy Farmer: “The election of officers was next to order. Harvey S. Day (Veteran Willis breeder) was urged to become president but firmly refused. William B. Hatch was proposed, (but refused). Norris A. Cole was also nominated. He attempted to decline, but the breeders were becoming tired of this custom and Mr. Cole was forced to take the office . . . Harvey S. Day was nominated and elected vice president before he could rise to his feet to decline.”

Part of Norris’ local eminence at the meeting was due to one of his cows who had recently smashed a state record for butter production. Born on March 10, 1908 at the Pontiac asylum and purchased by the Cole brothers a year later, Pontiac De Nijlander was the daughter of Pontiac Apollo and the granddaughter of the legendary bull Hengerveld De Kol.

A standard test of the day was the “7-day test,” during which week a given cow’s output was measured. Pontiac De Nijlander outstripped all other Michigan cows by producing 35.43 pounds of butter, a number that Norris immediately featured in his ongoing Brownell’s Dairy Farmer advertisements for Ypsiland. Until that point, a 30-pound cow had been considered exceptional.

A subdivision now occupies the site where Pontiac De Nijlander once nibbled grass alongside Golfside Road. Though she is long gone, her DNA lives on in modern Holsteins, and the “Pontiac” line name still occasionally surfaces in the names of prize-winning Holsteins. From asylum to accolades, one Ypsilanti cow broke the records of her day and won fame for Washtenaw County.

(Laura Bien is the author of “Hidden History of Ypsilanti” and “Tales from the Ypsilanti Archives.”)

Editor's Note:
We were on the train, traveling across the Ontario countryside. My father and I were accompanying my grandmother home after a visit to Michigan. There were cows grazing in the fields. I asked my grandmother what kind of cows my grandfather had raised. Were they black and white ones?

“Oh dear, no!” my normally mild mannered Granny exclaimed. Clearly Grandpa Porter would not have gone within 20 yards of a Holstein. His dairy herds were Guernsey, like Elsie the Cow. My grandfather was a college-trained dairyman (Guelph) who managed herds for large dairy farm owners. The herdsman was responsible for maintaining the purity of the breed among other things. His last dairy farm was Brookwater Farm in Webster Town- ship.

Every year my grandmother faithfully attended the Canadian Exhibition on Toronto’s lakeshore. She headed for the Dairy Pavilion. One year I went with her. We made our way to the major attraction, a very large sculpture made of butter. To Granny, it was a thing of beauty. To me, while interesting, it was also a little strange.

I have my own form of loyalty to the breed. Whenever possible my choice of milk is from Guernsey Farms.

[Photo caption from original print edition]: Above: Ypsiland Farms proudly declared itself as “home of Pontiac De Nijlander” in this wordy 1914 ad from the Michigan Dairy Farmer.