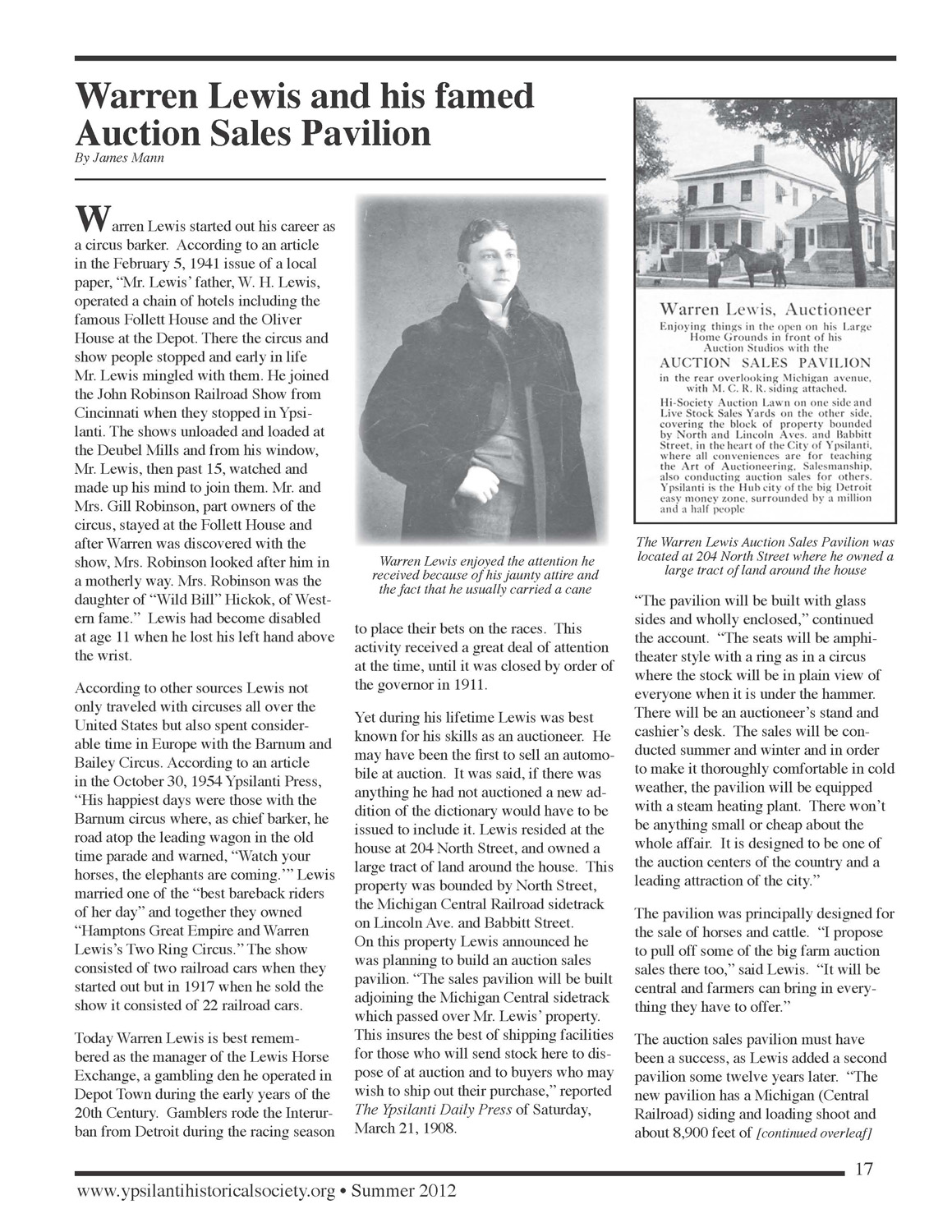 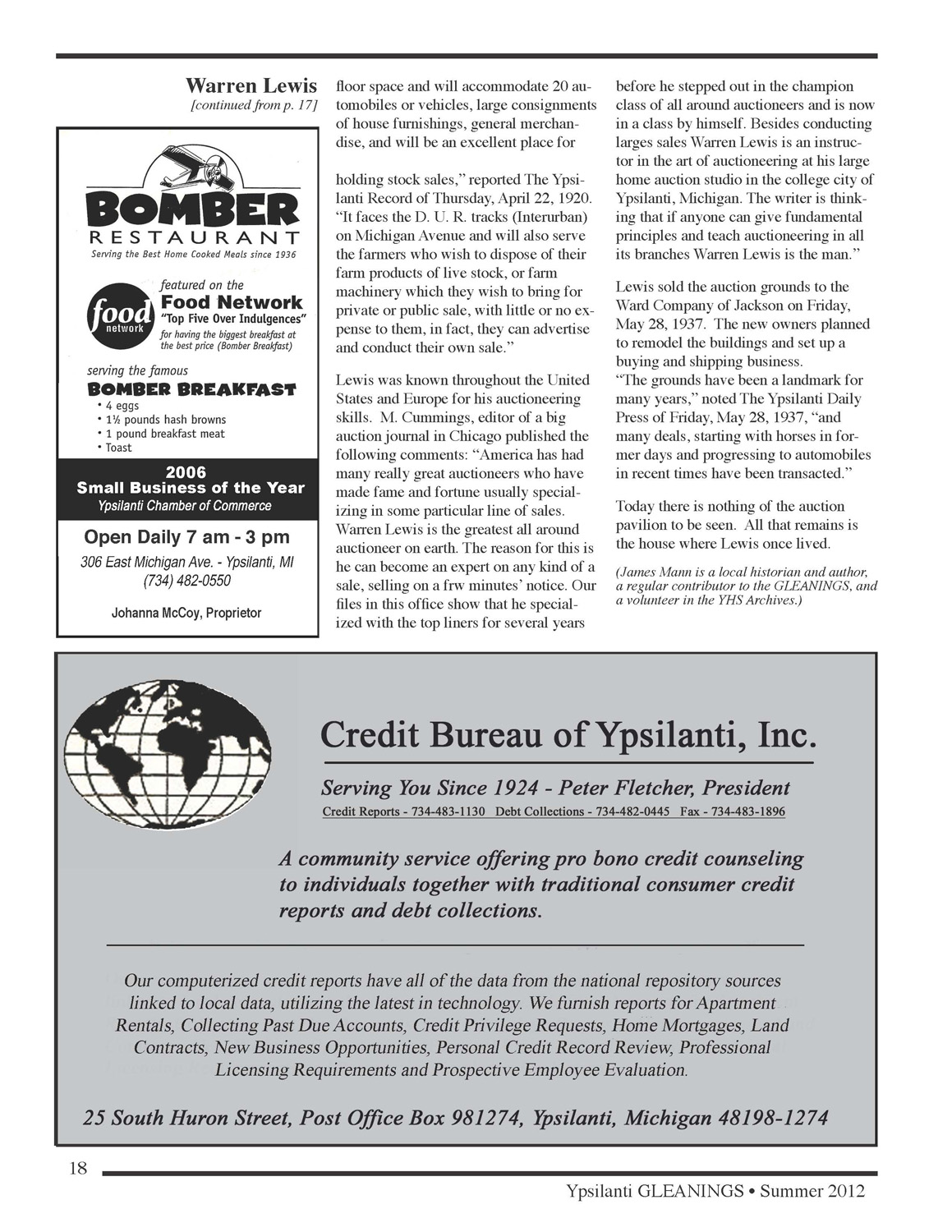 Warren Lewis started out his career as a circus barker. According to an article in the February 5, 1941 issue of a local paper, “Mr. Lewis’ father, W. H. Lewis, operated a chain of hotels including the famous Follett House and the Oliver House at the Depot. There the circus and show people stopped and early in life Mr. Lewis mingled with them. He joined the John Robinson Railroad Show from Cincinnati when they stopped in Ypsilanti. The shows unloaded and loaded at the Deubel Mills and from his window, Mr. Lewis, then past 15, watched and made up his mind to join them. Mr. and Mrs. Gill Robinson, part owners of the circus, stayed at the Follett House and after Warren was discovered with the show, Mrs. Robinson looked after him in a motherly way. Mrs. Robinson was the daughter of “Wild Bill” Hickok, of Western fame.” Lewis had become disabled at age 11 when he lost his left hand above the wrist.

According to other sources Lewis not only traveled with circuses all over the United States but also spent considerable time in Europe with the Barnum and Bailey Circus. According to an article in the October 30, 1954 Ypsilanti Press, “His happiest days were those with the Barnum circus where, as chief barker, he road atop the leading wagon in the old time parade and warned, “Watch your horses, the elephants are coming.’” Lewis married one of the “best bareback riders of her day” and together they owned “Hamptons Great Empire and Warren Lewis’s Two Ring Circus.” The show consisted of two railroad cars when they started out but in 1917 when he sold the show it consisted of 22 railroad cars.

Today Warren Lewis is best remembered as the manager of the Lewis Horse Exchange, a gambling den he operated in Depot Town during the early years of the 20th Century. Gamblers rode the Interurban from Detroit during the racing season to place their bets on the races. This activity received a great deal of attention at the time, until it was closed by order of the governor in 1911.

Yet during his lifetime Lewis was best known for his skills as an auctioneer. He may have been the first to sell an automobile at auction. It was said, if there was anything he had not auctioned a new addition of the dictionary would have to be issued to include it. Lewis resided at the house at 204 North Street, and owned a large tract of land around the house. This property was bounded by North Street, the Michigan Central Railroad sidetrack on Lincoln Ave. and Babbitt Street. On this property Lewis announced he was planning to build an auction sales pavilion. “The sales pavilion will be built adjoining the Michigan Central sidetrack which passed over Mr. Lewis’ property. This insures the best of shipping facilities for those who will send stock here to dispose of at auction and to buyers who may wish to ship out their purchase,” reported The Ypsilanti Daily Press of Saturday, March 21, 1908.

“The pavilion will be built with glass sides and wholly enclosed,” continued the account. “The seats will be amphitheater style with a ring as in a circus where the stock will be in plain view of everyone when it is under the hammer. There will be an auctioneer’s stand and cashier’s desk. The sales will be conducted summer and winter and in order to make it thoroughly comfortable in cold weather, the pavilion will be equipped with a steam heating plant. There won’t be anything small or cheap about the whole affair. It is designed to be one of the auction centers of the country and a leading attraction of the city.”

The pavilion was principally designed for the sale of horses and cattle. “I propose to pull off some of the big farm auction sales there too,” said Lewis. “It will be central and farmers can bring in everything they have to offer.”

The auction sales pavilion must have been a success, as Lewis added a second pavilion some twelve years later. “The new pavilion has a Michigan (Central Railroad) siding and loading shoot and about 8,900 feet of floor space and will accommodate 20 automobiles or vehicles, large consignments of house furnishings, general merchandise, and will be an excellent place for holding stock sales,” reported The Ypsilanti Record of Thursday, April 22, 1920. “It faces the D. U. R. tracks (Interurban) on Michigan Avenue and will also serve the farmers who wish to dispose of their farm products of live stock, or farm machinery which they wish to bring for private or public sale, with little or no expense to them, in fact, they can advertise and conduct their own sale.”

Lewis was known throughout the United States and Europe for his auctioneering skills. M. Cummings, editor of a big auction journal in Chicago published the following comments: “America has had many really great auctioneers who have made fame and fortune usually specializing in some particular line of sales. Warren Lewis is the greatest all around auctioneer on earth. The reason for this is he can become an expert on any kind of a sale, selling on a few minutes’ notice. Our files in this office show that he specialized with the top liners for several years before he stepped out in the champion class of all around auctioneers and is now in a class by himself. Besides conducting larges sales Warren Lewis is an instructor in the art of auctioneering at his large home auction studio in the college city of Ypsilanti, Michigan. The writer is thinking that if anyone can give fundamental principles and teach auctioneering in all its branches Warren Lewis is the man.”

Lewis sold the auction grounds to the Ward Company of Jackson on Friday, May 28, 1937. The new owners planned to remodel the buildings and set up a buying and shipping business. “The grounds have been a landmark for many years,” noted The Ypsilanti Daily Press of Friday, May 28, 1937, “and many deals, starting with horses in former days and progressing to automobiles in recent times have been transacted.”

Today there is nothing of the auction pavilion to be seen. All that remains is the house where Lewis once lived.

(James Mann is a local historian and author, a regular contributor to the GLEANINGS, and a volunteer in the YHS Archives.)

[Photo caption from original print edition]: Warren Lewis enjoyed the attention he received because of his jaunty attire and the fact that he usually carried a cane

[Photo caption from original print edition]: The Warren Lewis Auction Sales Pavilion was located at 204 North Street where he owned a large tract of land around the house