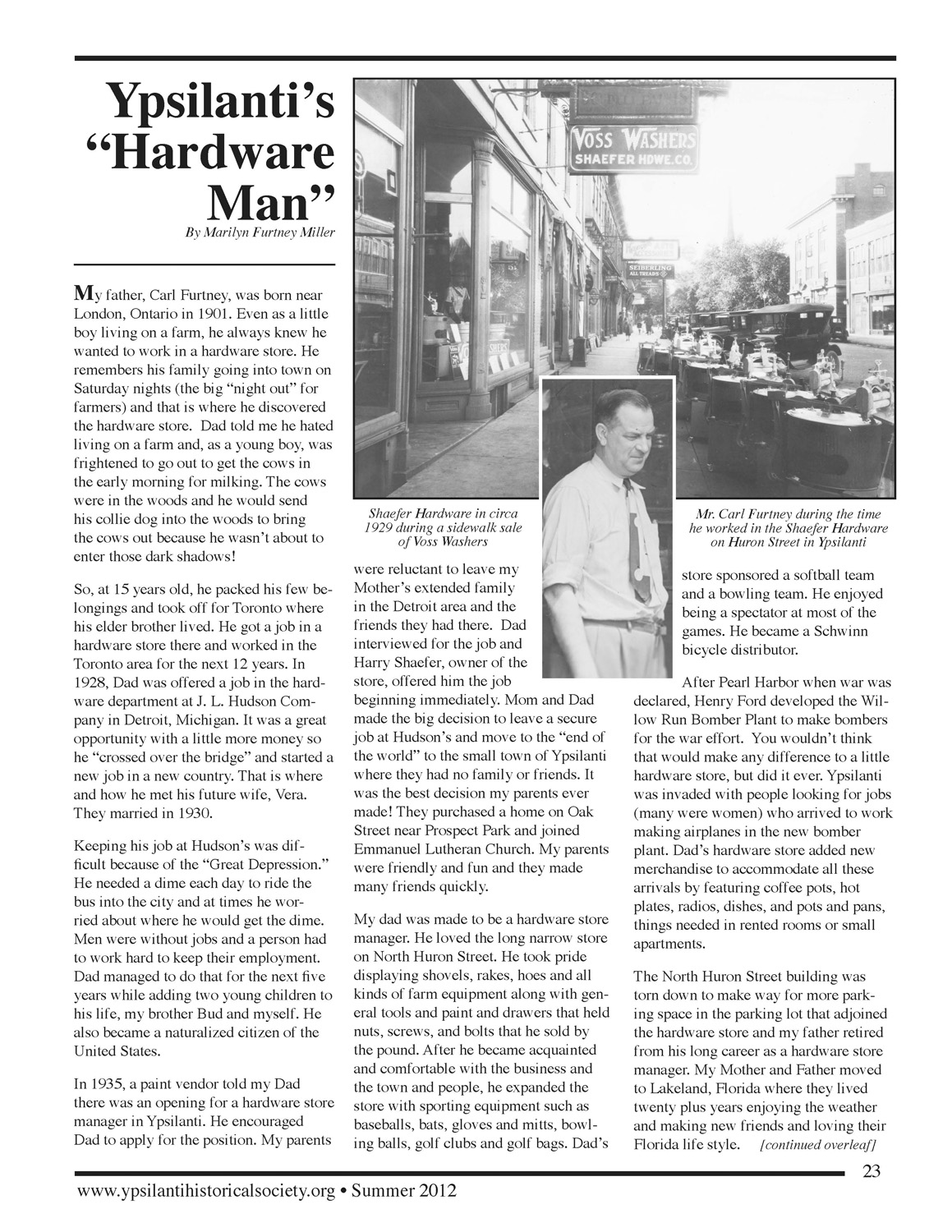 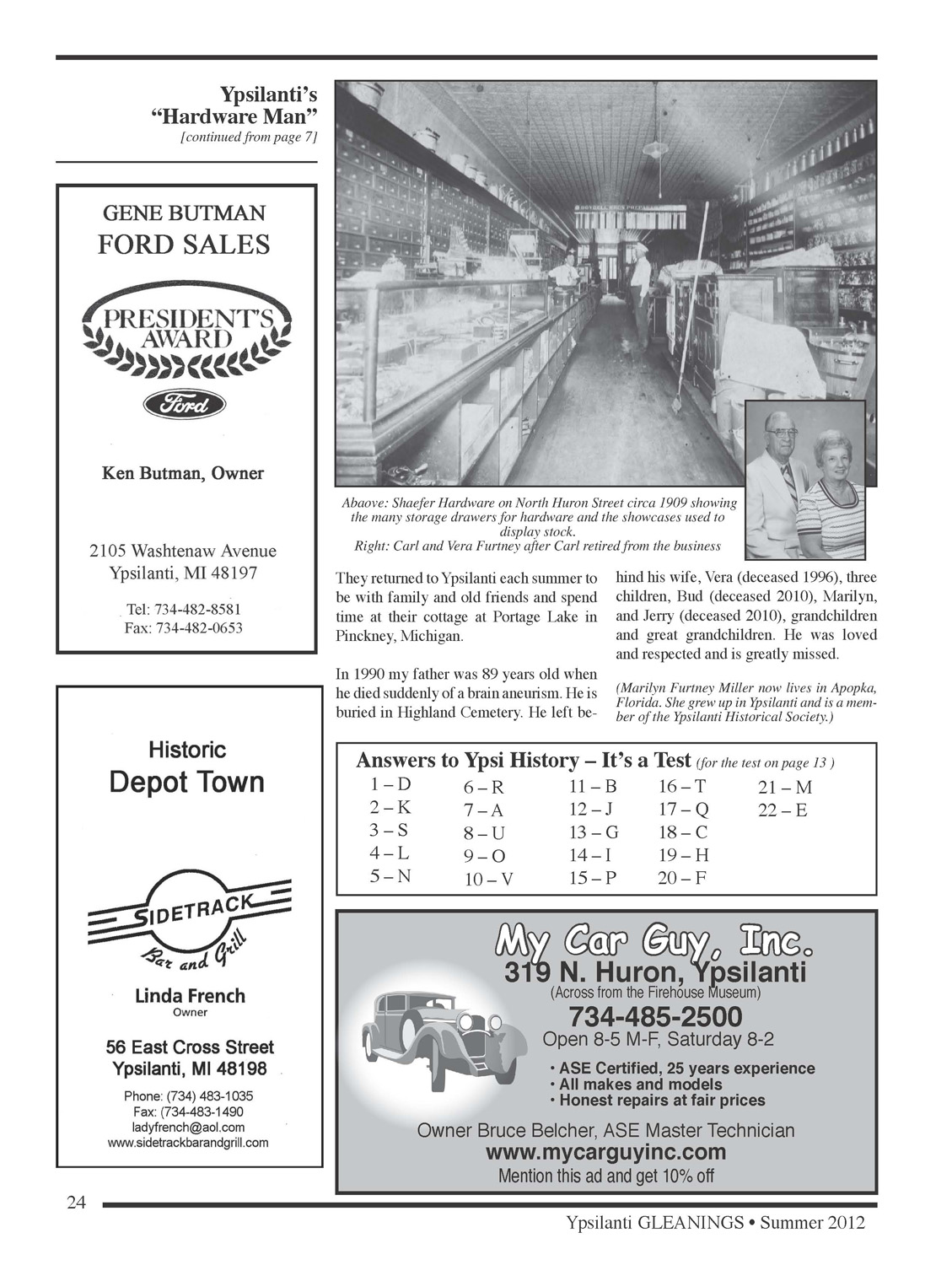 My father, Carl Furtney, was born near London, Ontario in 1901. Even as a little boy living on a farm, he always knew he wanted to work in a hardware store. He remembers his family going into town on Saturday nights (the big “night out” for farmers) and that is where he discovered the hardware store. Dad told me he hated living on a farm and, as a young boy, was frightened to go out to get the cows in the early morning for milking. The cows were in the woods and he would send his collie dog into the woods to bring the cows out because he wasn’t about to enter those dark shadows!

So, at 15 years old, he packed his few belongings and took off for Toronto where his elder brother lived. He got a job in a hardware store there and worked in the Toronto area for the next 12 years. In 1928, Dad was offered a job in the hardware department at J. L. Hudson Company in Detroit, Michigan. It was a great opportunity with a little more money so he “crossed over the bridge” and started a new job in a new country. That is where and how he met his future wife, Vera. They married in 1930.

Keeping his job at Hudson’s was difficult because of the “Great Depression.” He needed a dime each day to ride the bus into the city and at times he worried about where he would get the dime. Men were without jobs and a person had to work hard to keep their employment. Dad managed to do that for the next five years while adding two young children to his life, my brother Bud and myself. He also became a naturalized citizen of the United States.

In 1935, a paint vendor told my Dad there was an opening for a hardware store manager in Ypsilanti. He encouraged Dad to apply for the position. My parents were reluctant to leave my Mother’s extended family in the Detroit area and the friends they had there. Dad interviewed for the job and Harry Shaefer, owner of the store, offered him the job beginning immediately. Mom and Dad made the big decision to leave a secure job at Hudson’s and move to the “end of the world” to the small town of Ypsilanti where they had no family or friends. It was the best decision my parents ever made! They purchased a home on Oak Street near Prospect Park and joined Emmanuel Lutheran Church. My parents were friendly and fun and they made many friends quickly.

My dad was made to be a hardware store manager. He loved the long narrow store on North Huron Street. He took pride displaying shovels, rakes, hoes and all kinds of farm equipment along with general tools and paint and drawers that held nuts, screws, and bolts that he sold by the pound. After he became acquainted and comfortable with the business and the town and people, he expanded the store with sporting equipment such as baseballs, bats, gloves and mitts, bowling balls, golf clubs and golf bags. Dad’s store sponsored a softball team and a bowling team. He enjoyed being a spectator at most of the games. He became a Schwinn bicycle distributor.

After Pearl Harbor when war was declared, Henry Ford developed the Willow Run Bomber Plant to make bombers for the war effort. You wouldn’t think that would make any difference to a little hardware store, but did it ever. Ypsilanti was invaded with people looking for jobs (many were women) who arrived to work making airplanes in the new bomber plant. Dad’s hardware store added new merchandise to accommodate all these arrivals by featuring coffee pots, hot plates, radios, dishes, and pots and pans, things needed in rented rooms or small apartments.

The North Huron Street building was torn down to make way for more parking space in the parking lot that adjoined the hardware store and my father retired from his long career as a hardware store manager. My Mother and Father moved to Lakeland, Florida where they lived twenty plus years enjoying the weather and making new friends and loving their Florida life style.

They returned to Ypsilanti each summer to be with family and old friends and spend time at their cottage at Portage Lake in Pinckney, Michigan.

In 1990 my father was 89 years old when he died suddenly of a brain aneurism. He is buried in Highland Cemetery. He left behind his wife, Vera (deceased 1996), three children, Bud (deceased 2010), Marilyn, and Jerry (deceased 2010), grandchildren and great grandchildren. He was loved and respected and is greatly missed.

(Marilyn Furtney Miller now lives in Apopka, Florida. She grew up in Ypsilanti and is a member of the Ypsilanti Historical Society.)

[Photo caption from original print edition]: Shaefer Hardware in circa 1929 during a sidewalk sale
of Voss Washers

[Photo caption from original print edition]: Mr. Carl Furtney during the time he worked in the Shaefer Hardware on Huron Street in Ypsilanti

[Photo caption from original print edition]: Abaove: Shaefer Hardware on North Huron Street circa 1909 showing the many storage drawers for hardware and the showcases used to
display stock. Right: Carl and Vera Furtney after Carl retired from the business