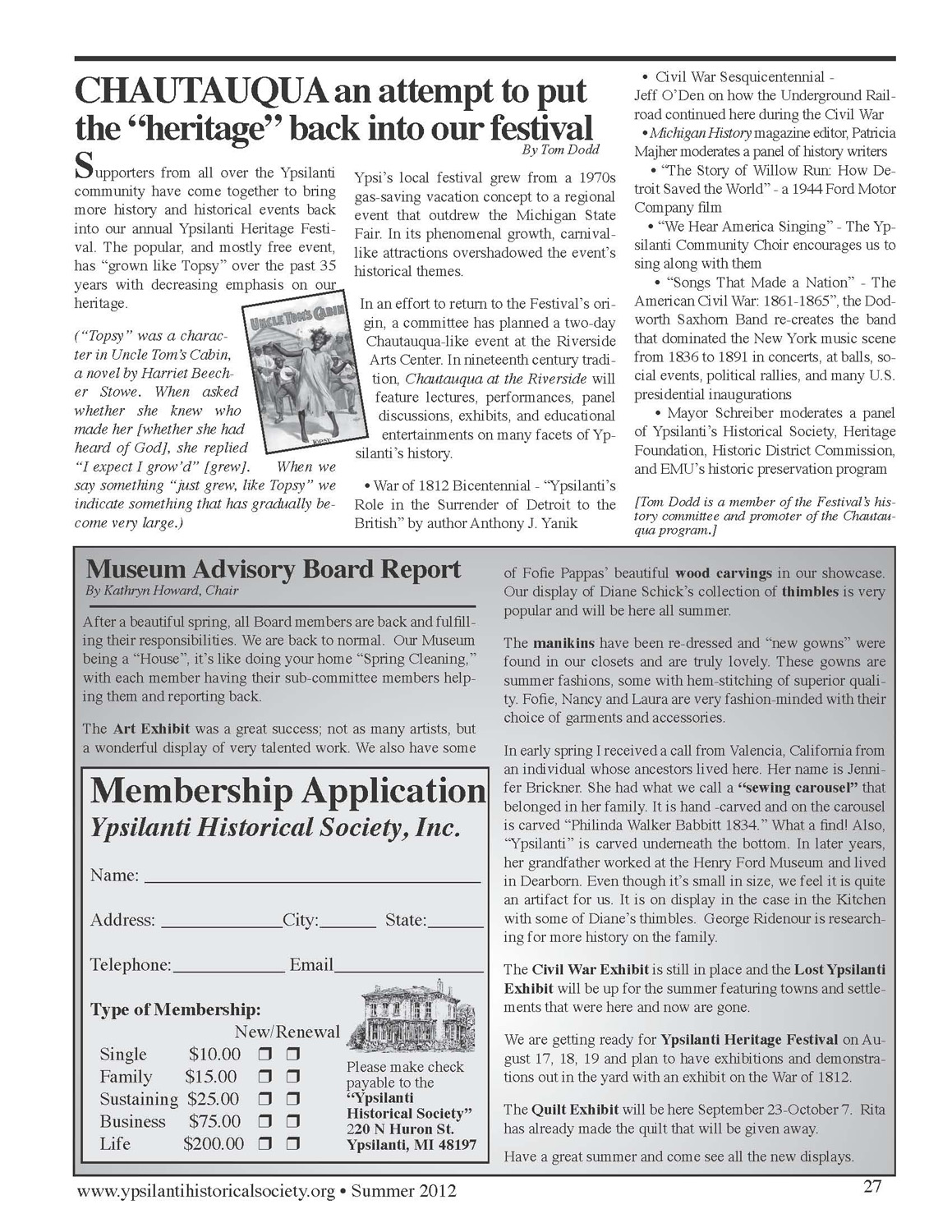 CHAUTAUQUA an attempt to put the “heritage” back into our festival

Supporters from all over the Ypsilanti community have come together to bring more history and historical events back into our annual Ypsilanti Heritage Festival. The popular, and mostly free event, has “grown like Topsy” over the past 35 years with decreasing emphasis on our heritage.

(“Topsy” was a character in Uncle Tom’s Cabin, a novel by Harriet Beecher Stowe. When asked whether she knew who made her [whether she had heard of God], she replied “I expect I grow’d” [grew]. When we say something “just grew, like Topsy” we indicate something that has gradually become very large.)

In an effort to return to the Festival’s origin, a committee has planned a two-day Chautauqua-like event at the Riverside Arts Center. In nineteenth century tradition, Chautauqua at the Riverside will feature lectures, performances, panel discussions, exhibits, and educational entertainments on many facets of Ypsilanti’s history.

• War of 1812 Bicentennial - “Ypsilanti’s Role in the Surrender of Detroit to the British” by author Anthony J. Yanik
• Civil War Sesquicentennial - Jeff O’Den on how the Underground Railroad continued here during the Civil War
• Michigan History magazine editor, Patricia Majher moderates a panel of history writers
• “The Story of Willow Run: How Detroit Saved the World” - a 1944 Ford Motor Company film
• “We Hear America Singing” - The Ypsilanti Community Choir encourages us to sing along with them
• “Songs That Made a Nation” - The American Civil War: 1861-1865”, the Dodworth Saxhorn Band re-creates the band that dominated the New York music scene from 1836 to 1891 in concerts, at balls, social events, political rallies, and many U.S. presidential inaugurations
• Mayor Schreiber moderates a panel of Ypsilanti’s Historical Society, Heritage Foundation, Historic District Commission, and EMU’s historic preservation program

[Tom Dodd is a member of the Festival’s history committee and promoter of the Chautauqua program.]