Invitation to Visit the Contagious Hospital 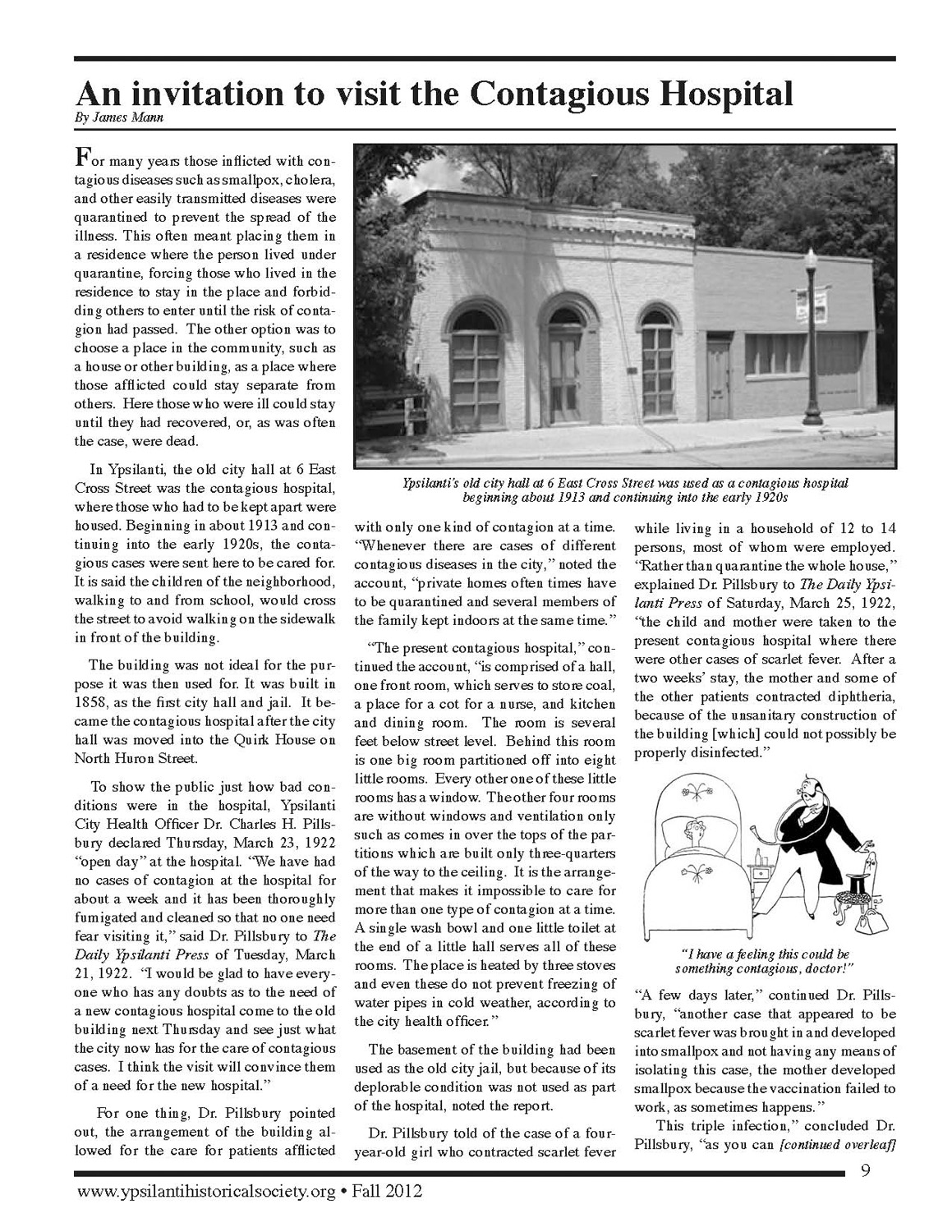 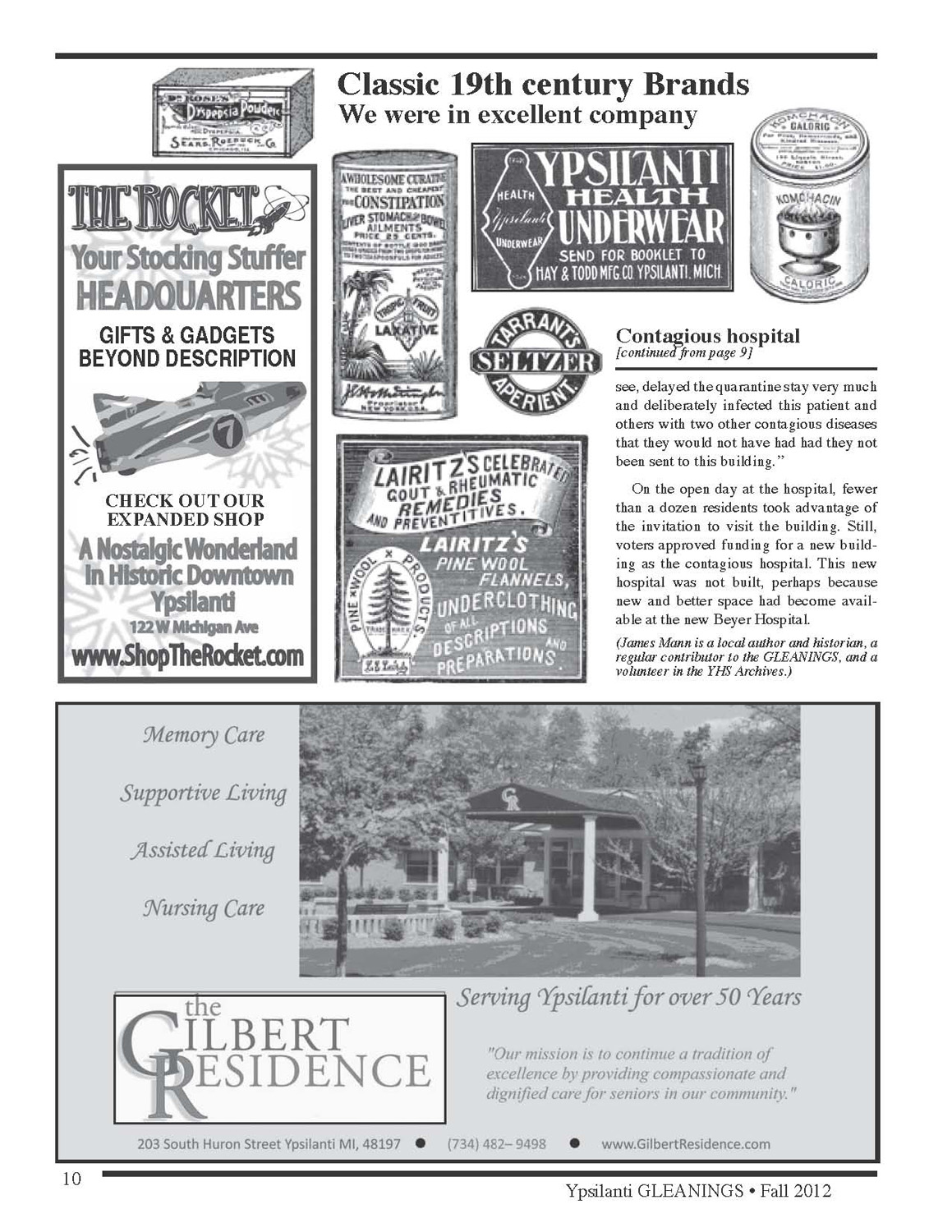 For many years those inflicted with contagious diseases, such as smallpox, cholera and other easily transmitted diseases were quarantined to prevent the spread of the illness. This often meant placing the residence where the person lived under quarantine, forcing those who lived in the residence to stay in the place and forbidding others to enter until the risk of contagion had passed. The other option was to choose a place in the community, such as a house or other building, as a place where those afflicted could stay separate from others. Here those who were ill could stay until they had recovered, or, as was often the case, were dead. In Ypsilanti the old city hall at 6 East Cross Street was the contagious hospital, where those who had to be kept apart were housed. Here beginning in about 1913 and continuing into the early 1920’s, the contagious cases were sent to be cared for. It is said, the children of the neighborhood walking to and from school, would cross the street, to avoid walking on the sidewalk in front of the building. The building was not ideal to the purpose it was then used for. It was built in 1858, as the first city hall and jail. It became the contagious hospital after the city hall was moved into the Quirk House on North Huron Street. To show the public just how bad conditions were in the hospital, Ypsilanti City Health Officer Dr. Charles H. Pillsbury declared Thursday, March 23, 1922 “open day” at the hospital. “We have had no cases of contagion at the hospital for about a week and it has been thoroughly fumigated and cleaned so that no one need fear visiting it,” said Dr. Pillsbury to The Daily Ypsilanti Press of Tuesday, March 21, 1922. “I would be glad to have everyone who has any doubts as to the need of a new contagious hospital, come to the old building next Thursday and see just what the city now has for the care of contagious cases. I think the visit will convince them of a need for the new hospital.” For one thing, Dr. Pillsbury pointed out, the arrangement of the building made it possible to care for patients afflicted with only one kind of contagion at a time. “Whenever there are cases of different contagious diseases in the city,” noted the account, “private homes often times have to be quarantined and several members of the family kept indoors at the same time.” “The present contagious hospital,” continued the account, “is comprised of a hall, one front room, which serves to store coal, a place for a cot for a nurse, and kitchen and dining room. The room is several feet below street level. Behind this room is one big room partitioned off into eight little rooms. Every other one of these little rooms has a window. The other four rooms are without windows and ventilation only such as comes in over the tops of the partitions which are built only three-quarters of the way to the ceiling. It is the arrangement that makes it impossible to care for more than one type of contagion at a time. A single wash bowl and one little toilet at the end of a little hall serves all of these rooms. The place is heated by three stoves and even these do not prevent freezing of water pipes in cold weather, according to the city health officer.” The basement of the building had been used as the old city jail, but because of its deplorable condition was not used as part of the hospital, noted the report. Dr. Pillsbury told of the case of a four year old girl who contracted scarlet fever while living in a household of 12 to 14 persons, most of whom were employed. “Rather than quarantine the whole house,” explained Dr. Pillsbury to The Daily Ypsilanti Press of Saturday, March 25, 1922, “the child and mother were taken to the present contagious hospital where there were other cases of scarlet fever. After a two weeks’ stay the mother and some of the other patients contracted diphtheria, because of the unsanitary construction of the building it could not possibly be properly disinfected.” “A few days later,” continued Dr. Pillsbury, “another case that appeared to be scarlet fever was brought in and developed into smallpox and not having any means of isolating this case the mother developed smallpox because the vaccination failed to work, as sometimes happens.” “This triple infection,” concluded Dr. Pillsbury, “as you can see delayed the quarantine stay very much and deliberately infected this patient and others with two other contagious diseases that they would not have had had they not been sent to this building.” On open day at the hospital, less than a dozen residents took advantage of the invitation to visit the building. Still, voters approved funding for a new building as the contagious hospital. This new hospital was not built, perhaps because new and better space had become available at the new Beyer Hospital. (James Mann is a local author and historian, a regular contributor to the Gleanings, and a volunteer in the YHS Archives.)

Photo Captions: Photo 1: Ypsilanti’s old city hall at 6 East Cross Street was used as a contagious hospital beginning in about 1913 and continuing into the early 1920’s.