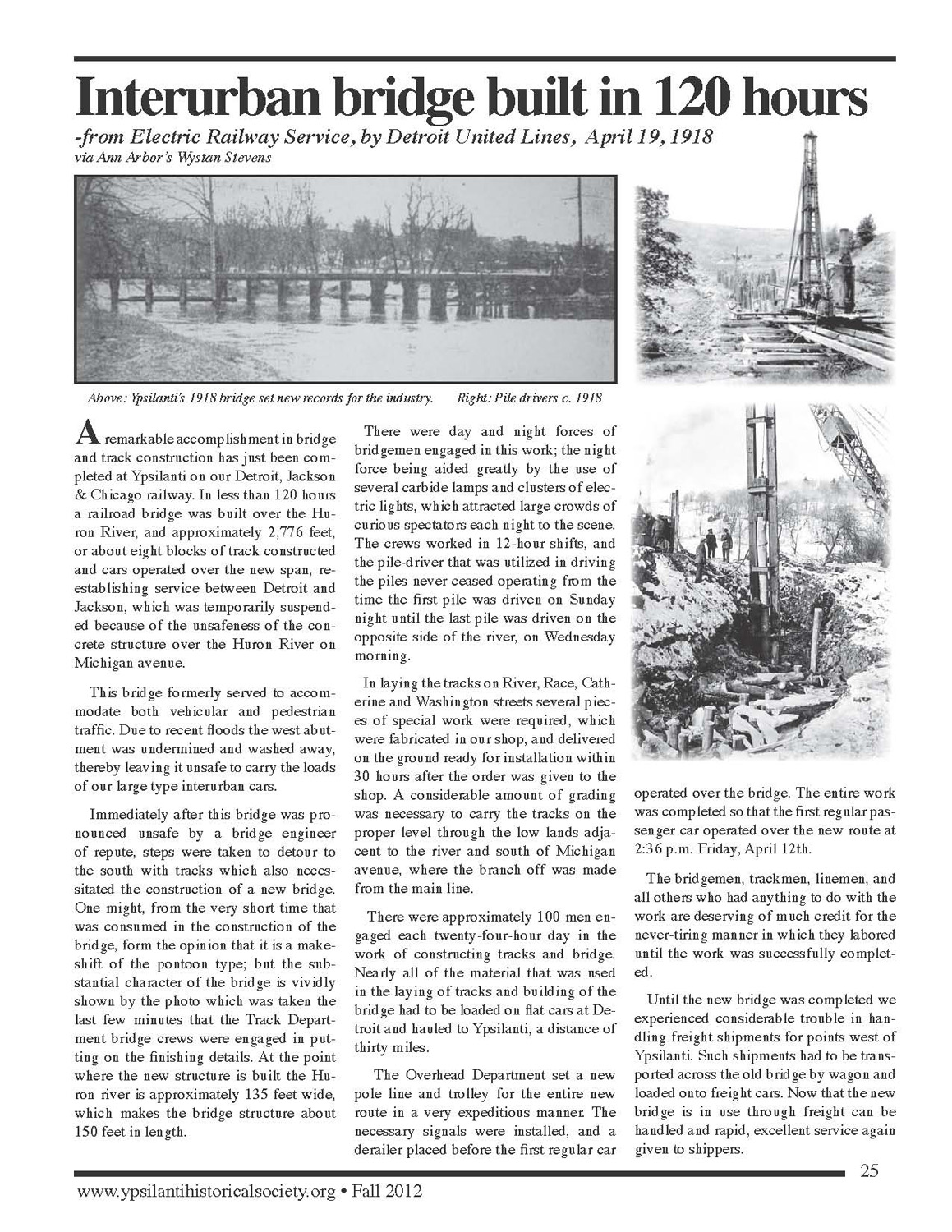 A remarkable accomplishment in bridge and track construction has just been completed at Ypsilanti on our Detroit, Jackson & Chicago railway. In less than 120 hours a railroad bridge was built over the Huron River, and approximately 2,776 feet, or about eight blocks of track constructed and cars operated over the new span, re-establishing service between Detroit and Jackson, which was temporarily suspended because of the unsafeness of the concrete structure over the Huron River on Michigan avenue. This bridge formerly served to accommodate both vehicular and pedestrian traffic. Due to recent floods the west abutment was undermined and washed away, thereby leaving it unsafe to carry the loads of our large type interurban cars. Immediately after this bridge was pronounced unsafe by a bridge engineer of repute, steps were taken to detour to the south with tracks which also necessitated the construction of a new bridge. One might, from the very short time that was consumed in the construction of the bridge, form the opinion that it is a makeshift of the pontoon type; but the substantial character of the bridge is vividly shown by the photo which was taken the last few minutes that the Track Department bridge crews were engaged in putting on the finishing details. At the point where the new structure is built the Huron river is approximately 135 feet wide, which makes the bridge structure about 150 feet in length. There were day and night forces of bridgemen engaged in this work; the night force being aided greatly by the use of several carbide lamps and clusters of electric lights, which attracted large crowds of curious spectators each night to the scene. The crews worked in 12-hour shifts, and the pile-driver that was utilized in driving the piles never ceased operating from the time the first pile was driven on Sunday night until the last pile was driven on the opposite side of the river, on Wednesday morning. In laying the tracks on River, Race, Catherine and Washington streets several pieces of special work were required, which were fabricated in our shop, and delivered on the ground ready for installation within 30 hours after the order was given to the shop. A considerable amount of grading was necessary to carry the tracks on the proper level through the low lands adjacent to the river and south of Michigan avenue, where the branch-off was made from the main line. There were approximately 100 men engaged each twenty-four-hour day in the work of constructing tracks and bridge. Nearly all of the material that was used in the laying of tracks and building of the bridge had to be loaded on flat cars at Detroit and hauled to Ypsilanti, a distance of thirty miles. The Overhead Department set a new pole line and trolley for the entire new route in a very expeditious manner. The necessary signals were installed, and a derailer placed before the first regular car operated over the bridge. The entire work was completed so that the first regular passenger car operated over the new route at 2:36 p.m. Friday, April 12th. The bridgemen, trackmen, linemen, and all others who had anything to do with the work are deserving of much credit for the never-tiring manner in which they labored until the work was successfully completed. Until the new bridge was completed we experienced considerable trouble in handling freight shipments for points west of Ypsilanti. Such shipments had to be transported across the old bridge by wagon and loaded onto freight cars. Now that the new bridge is in use through freight can be handled and rapid, excellent service again given to shippers.