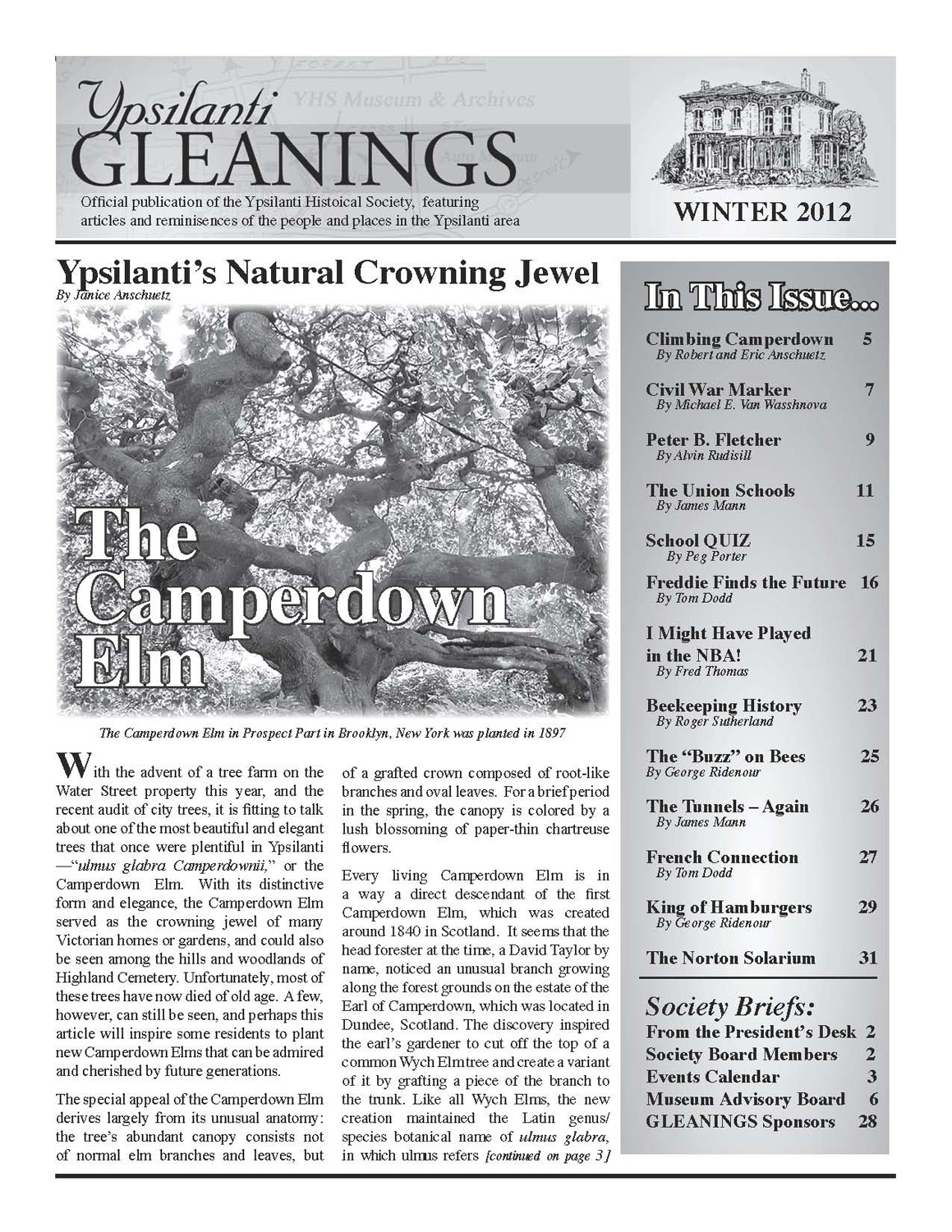 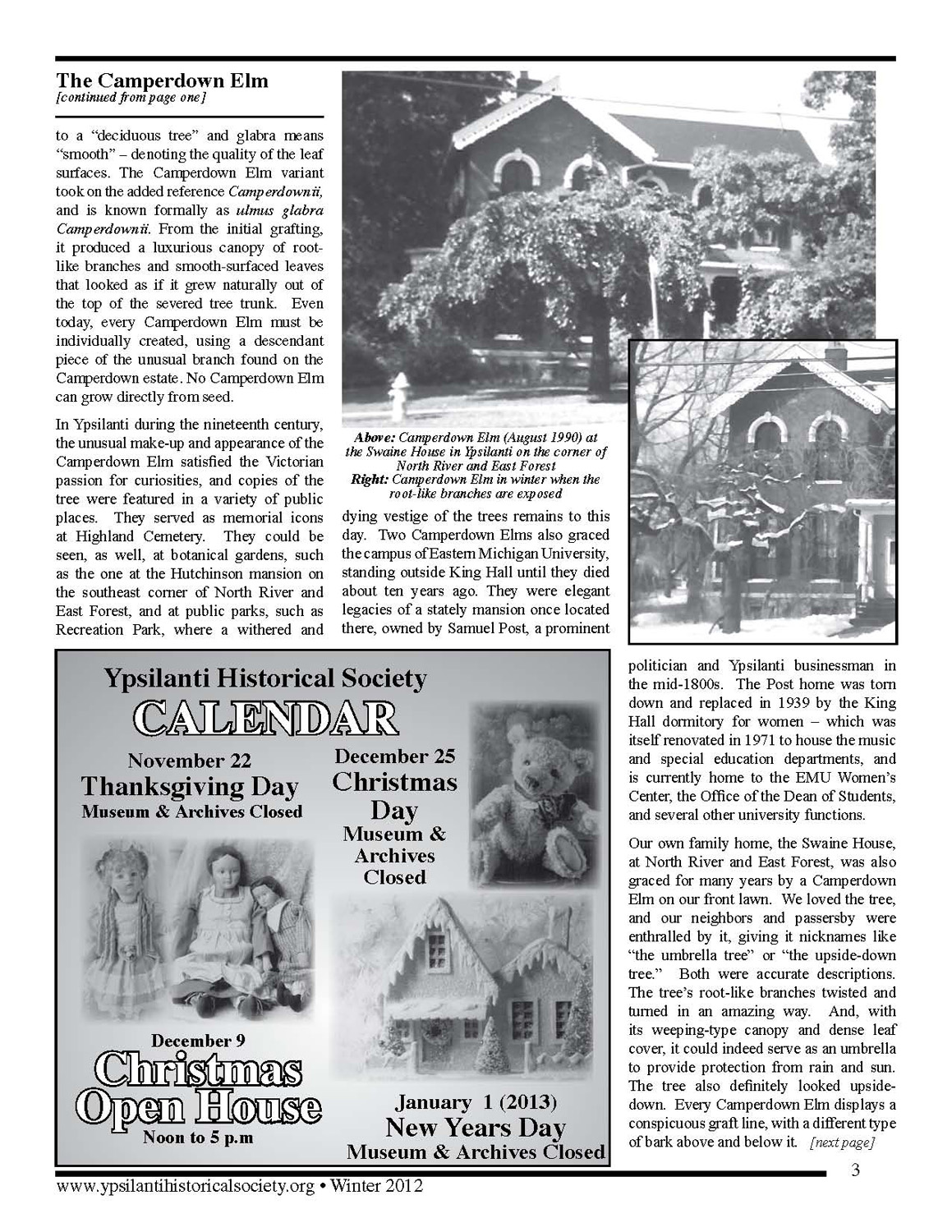 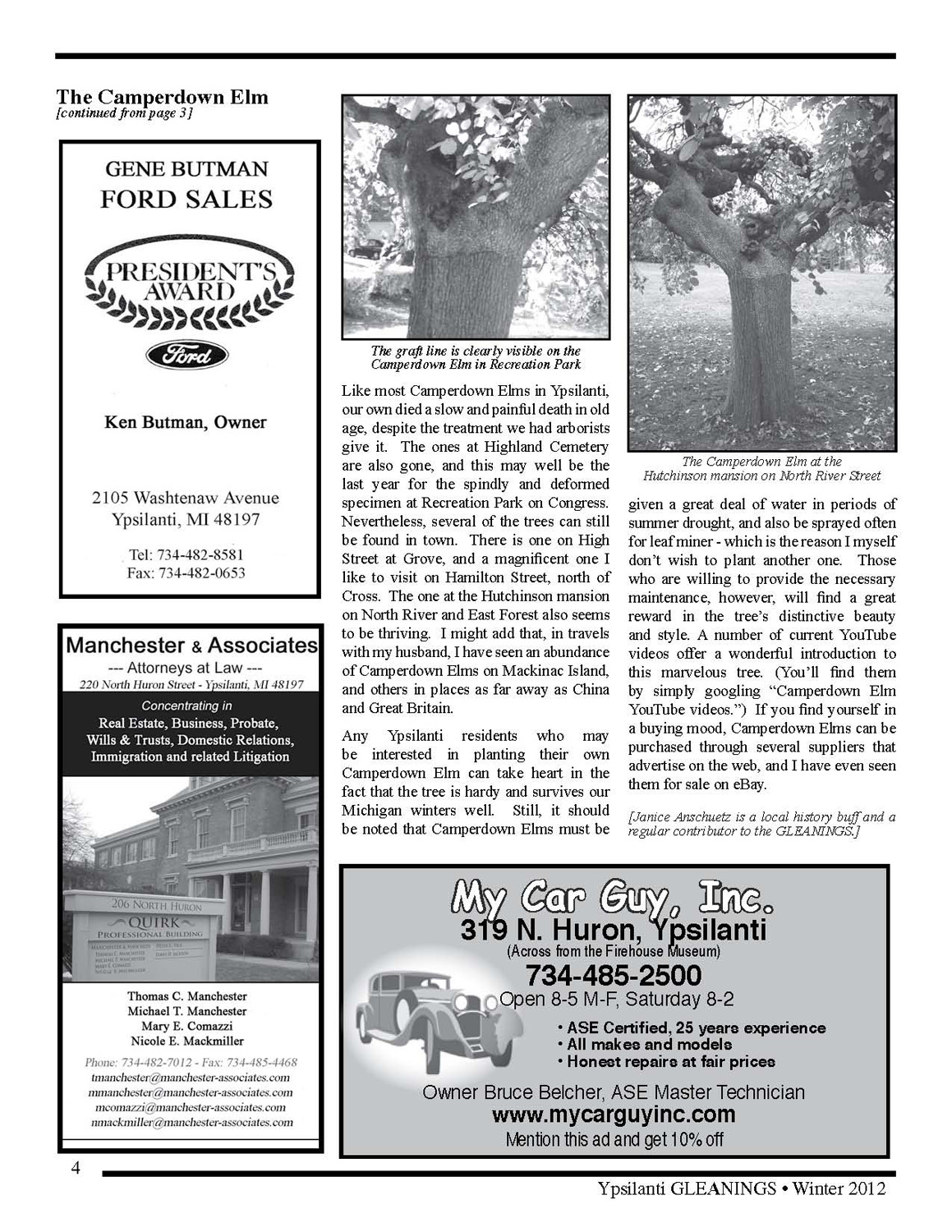 With the advent of a tree farm on the Water Street property this year, and the recent audit of city trees, it is fitting to talk about one of the most beautiful and elegant trees that once were plentiful in Ypsilanti ––“ulmus glabra Camperdownii,” or the Camperdown Elm. With its distinctive form and elegance, the Camperdown Elm served as the crowning jewel of many Victorian homes or gardens, and could also be seen among the hills and woodlands of Highland Cemetery. Unfortunately, most of these trees have now died of old age. A few, however, can still be seen, and perhaps this article will inspire some residents to plant new Camperdown Elms that can be admired and cherished by future generations. The special appeal of the Camperdown Elm derives largely from its unusual anatomy: the tree’s abundant canopy consists not of normal elm branches and leaves, but of a grafted crown composed of root-like branches and oval leaves. For a brief period in the spring, the canopy is colored by a lush blossoming of paper-thin chartreuse flowers. Every living Camperdown Elm is in a way a direct descendant of the first Camperdown Elm, which was created around 1840 in Scotland. It seems that the head forester at the time, a David Taylor by name, noticed an unusual branch growing along the forest grounds on the estate of the Earl of Camperdown, which was located in Dundee, Scotland. The discovery inspired the earl’s gardener to cut off the top of a common Wych Elm tree and create a variant of it by grafting a piece of the branch to the trunk. Like all Wych Elms, the new creation maintained the Latin genus/species botanical name of ulmus glabra, in which ulmus refers to a “deciduous tree” and glabra means “smooth” – denoting the quality of the leaf surfaces. The Camperdown Elm variant took on the added reference Camperdownii, and is known formally as ulmus glabra Camperdownii. From the initial grafting, it produced a luxurious canopy of root-like branches and smooth-surfaced leaves that looked as if it grew naturally out of the top of the severed tree trunk. Even today, every Camperdown Elm must be individually created, using a descendant piece of the unusual branch found on the Camperdown estate. No Camperdown Elm can grow directly from seed. In Ypsilanti during the nineteenth century, the unusual make-up and appearance of the Camperdown Elm satisfied the Victorian passion for curiosities, and copies of the tree were featured in a variety of public places. They served as memorial icons at Highland Cemetery. They could be seen, as well, at botanical gardens, such as the one at the Hutchinson mansion on the southeast corner of North River and East Forest, and at public parks, such as Recreation Park, where a withered and dying vestige of the trees remains to this day. Two Camperdown Elms also graced the campus of Eastern Michigan University, standing outside King Hall until they died about ten years ago. They were elegant legacies of a stately mansion once located there, owned by Samuel Post, a prominent politician and Ypsilanti businessman in the mid-1800s. The Post home was torn down and replaced in 1939 by the King Hall dormitory for women – which was itself renovated in 1971 to house the music and special education departments, and is currently home to the EMU Women’s Center, the Office of the Dean of Students, and several other university functions. Our own family home, the Swaine House, at North River and East Forest, was also graced for many years by a Camperdown Elm on our front lawn. We loved the tree, and our neighbors and passersby were enthralled by it, giving it nicknames like “the umbrella tree” or “the upside-down tree.” Both were accurate descriptions. The tree’s root-like branches twisted and turned in an amazing way. And, with its weeping-type canopy and dense leaf cover, it could indeed serve as an umbrella to provide protection from rain and sun. The tree also definitely looked upside-down. Every Camperdown Elm displays a conspicuous graft line, with a different type of bark above and below it. Like most Camperdown Elms in Ypsilanti, our own died a slow and painful death in old age, despite the treatment we had arborists give it. The ones at Highland Cemetery are also gone, and this may well be the last year for the spindly and deformed specimen at Recreation Park on Congress. Nevertheless, several of the trees can still be found in town. There is one on High Street at Grove, and a magnificent one I like to visit on Hamilton Street, north of Cross. The one at the Hutchinson mansion on North River and East Forest also seems to be thriving. I might add that, in travels with my husband, I have seen an abundance of Camperdown Elms on Mackinac Island, and others in places as far away as China and Great Britain. Any Ypsilanti residents who may be interested in planting their own Camperdown Elm can take heart in the fact that the tree is hardy and survives our Michigan winters well. Still, it should be noted that Camperdown Elms must be given a great deal of water in periods of summer drought, and also be sprayed often for leaf miner - which is the reason I myself don’t wish to plant another one. Those who are willing to provide the necessary maintenance, however, will find a great reward in the tree’s distinctive beauty and style. A number of current YouTube videos offer a wonderful introduction to this marvelous tree. (You’ll find them by simply googling “Camperdown Elm YouTube videos.”) If you find yourself in a buying mood, Camperdown Elms can be purchased through several suppliers that advertise on the web, and I have even seen them for sale on eBay. [Janice Anschuetz is a local history buff and a regular contributor to the GLEANINGS.]

Photo captions: 1. 1. The Camperdown Elm in Prospect Part in Brooklyn, New York was planted in 1897

2. Camperdown Elm (August 1990) at the Swaine House in Ypsilanti on the corner of North River and East Forest

3. Camperdown Elm in winter when the root-like branches are exposed

4. The graft line is clearly visible on the Camperdown Elm in Recreation Park

5. The Camperdown Elm at the Hutchinson mansion on North River Street