"We're ready for our close-up, Mr. DeMille": Movie history still being made in Ypsilanti 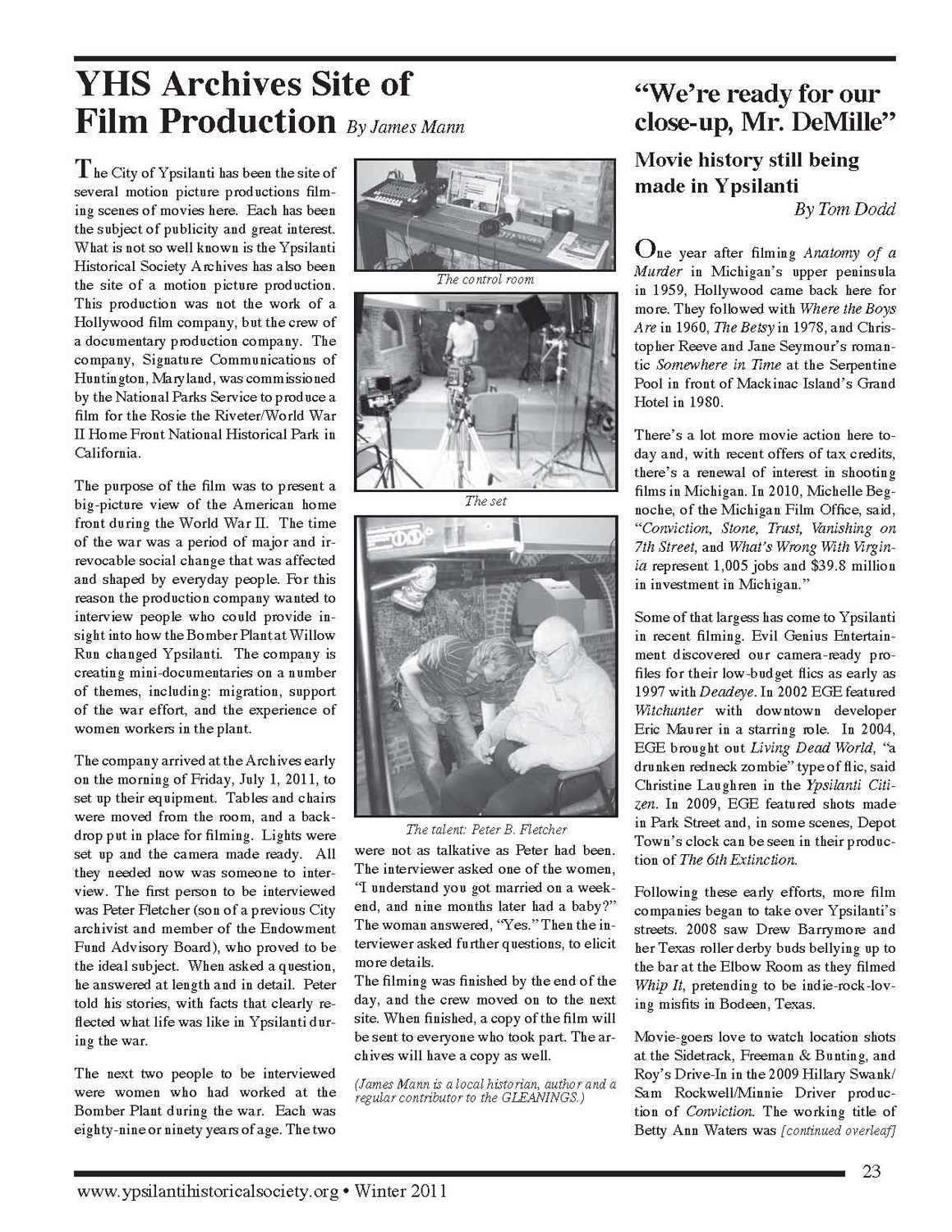 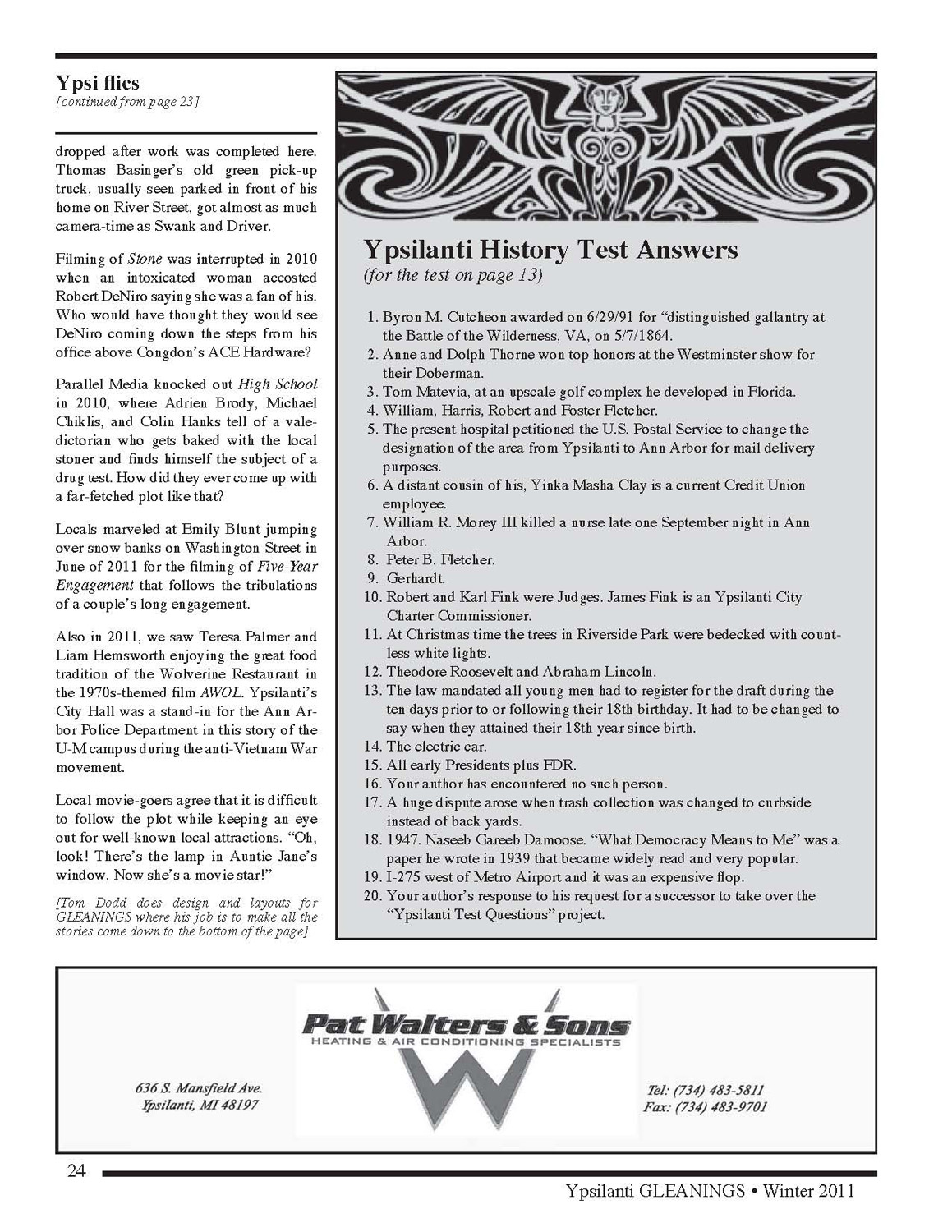 One year after filming Anatomy of a Murder in Michigan’s upper peninsula in 1959, Hollywood came back here for more. They followed with Where the Boys Are in 1960, The Betsy in 1978, and Chris- topher Reeve and Jane Seymour’s romantic Somewhere in Time at the Serpentine Pool in front of Mackinac Island’s Grand Hotel in 1980.

There’s a lot more movie action here to- day and, with recent offers of tax credits, there’s a renewal of interest in shooting films in Michigan. In 2010, Michelle Beg- noche, of the Michigan Film Office, said, “Conviction, Stone, Trust, Vanishing on 7th Street, and What’s Wrong With Virgin- ia represent 1,005 jobs and $39.8 million in investment in Michigan.”

Some of that largess has come to Ypsilanti in recent filming. Evil Genius Entertainment discovered our camera-ready profiles for their low-budget flics as early as 1997 with Deadeye. In 2002 EGE featured Witchunter with downtown developer Eric Maurer in a starring role. In 2004, EGE brought out Living Dead World, “a drunken redneck zombie” type of flic, said Christine Laughren in the Ypsilanti Citizen. In 2009, EGE featured shots made in Park Street and, in some scenes, Depot Town’s clock can be seen in their production of The 6th Extinction.

Following these early efforts, more film companies began to take over Ypsilanti’s streets. 2008 saw Drew Barrymore and her Texas roller derby buds bellying up to the bar at the Elbow Room as they filmed Whip It, pretending to be indie-rock-loving misfits in Bodeen, Texas.

Movie-goers love to watch location shots at the Sidetrack, Freeman & Bunting, and Roy’s Drive-In in the 2009 Hillary Swank/ Sam Rockwell/Minnie Driver production of Conviction. The working title of Betty Ann Waters was dropped after work was completed here. Thomas Basinger’s old green pick-up truck, usually seen parked in front of his home on River Street, got almost as much camera-time as Swank and Driver.

Filming of Stone was interrupted in 2010 when an intoxicated woman accosted Robert DeNiro saying she was a fan of his. Who would have thought they would see DeNiro coming down the steps from his office above Congdon’s ACE Hardware?

Parallel Media knocked out High School in 2010, where Adrien Brody, Michael Chiklis, and Colin Hanks tell of a vale- dictorian who gets baked with the local stoner and finds himself the subject of a drug test. How did they ever come up with a far-fetched plot like that?

Locals marveled at Emily Blunt jumping over snow banks on Washington Street in June of 2011 for the filming of Five-Year Engagement that follows the tribulations of a couple’s long engagement.

Also in 2011, we saw Teresa Palmer and Liam Hemsworth enjoying the great food tradition of the Wolverine Restaurant in the 1970s-themed film AWOL. Ypsilanti’s City Hall was a stand-in for the Ann Ar- bor Police Department in this story of the U-M campus during the anti-Vietnam War movement.

Local movie-goers agree that it is difficult to follow the plot while keeping an eye out for well-known local attractions. “Oh, look! There’s the lamp in Auntie Jane’s window. Now she’s a movie star!”