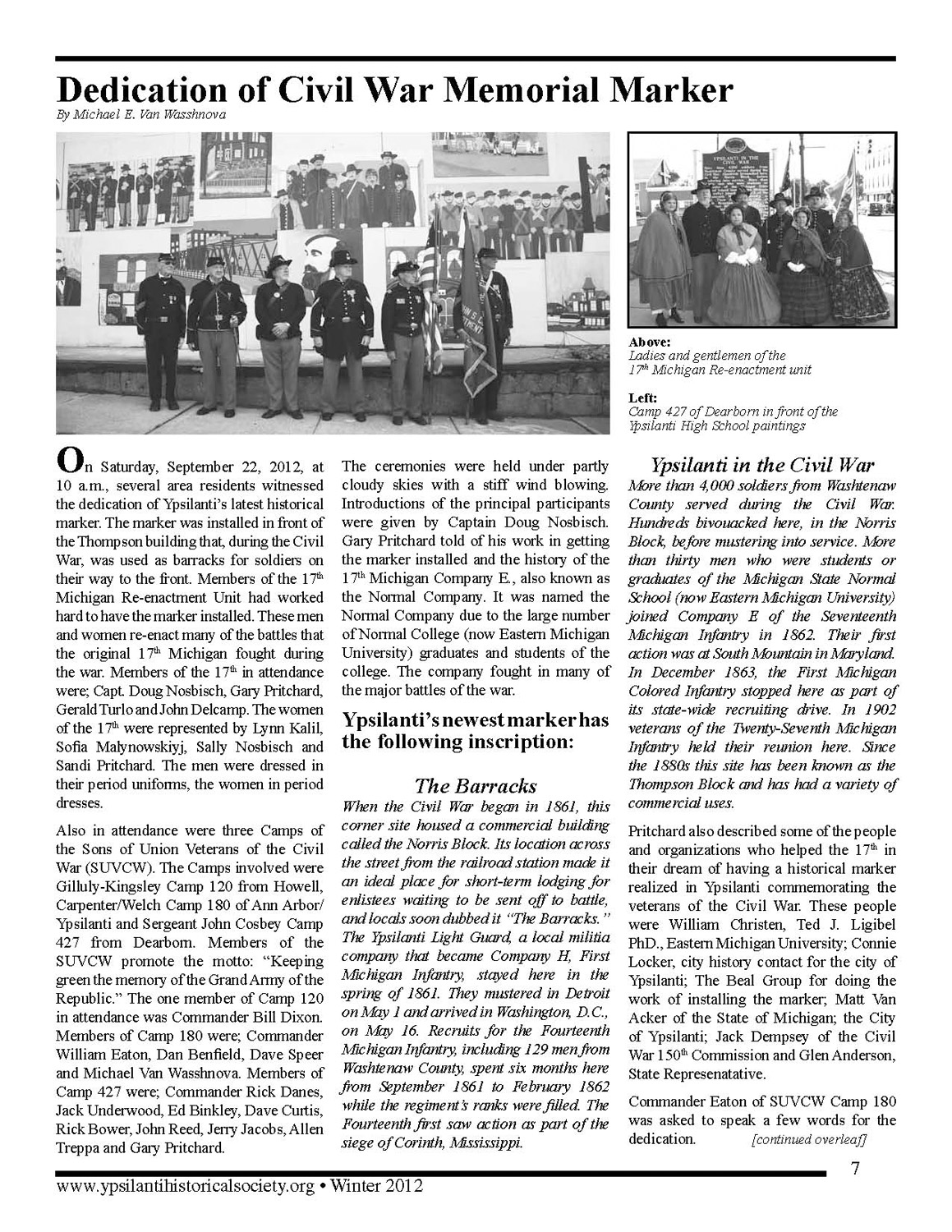 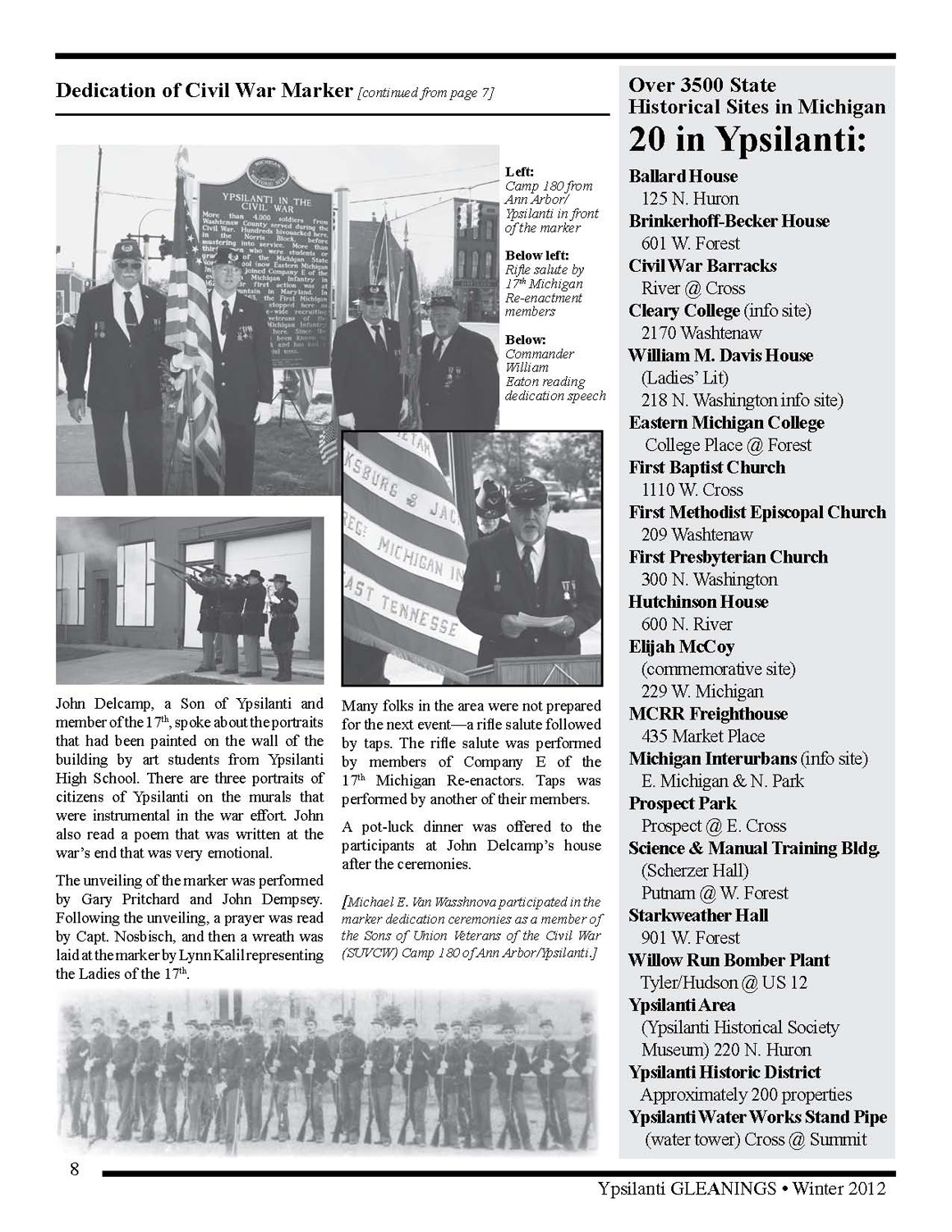 On Saturday, September 22, 2012, at 10 a.m., several area residents witnessed the dedication of Ypsilanti’s latest historical marker. The marker was installed in front of the Thompson building that, during the Civil War, was used as barracks for soldiers on their way to the front. Members of the 17th Michigan Re-enactment Unit had worked hard to have the marker installed. These men and women re-enact many of the battles that the original 17th Michigan fought during the war. Members of the 17th in attendance were; Capt. Doug Nosbisch, Gary Pritchard, Gerald Turlo and John Delcamp. The women of the 17th were represented by Lynn Kalil, Sofia Malynowskiyj, Sally Nosbisch and Sandi Pritchard. The men were dressed in their period uniforms, the women in period dresses. Also in attendance were three Camps of the Sons of Union Veterans of the Civil War (SUVCW). The Camps involved were Gilluly-Kingsley Camp 120 from Howell, Carpenter/Welch Camp 180 of Ann Arbor/Ypsilanti and Sergeant John Cosbey Camp 427 from Dearborn. Members of the SUVCW promote the motto: “Keeping green the memory of the Grand Army of the Republic.” The one member of Camp 120 in attendance was Commander Bill Dixon. Members of Camp 180 were; Commander William Eaton, Dan Benfield, Dave Speer and Michael Van Wasshnova. Members of Camp 427 were; Commander Rick Danes, Jack Underwood, Ed Binkley, Dave Curtis, Rick Bower, John Reed, Jerry Jacobs, Allen Treppa and Gary Pritchard. The ceremonies were held under partly cloudy skies with a stiff wind blowing. Introductions of the principal participants were given by Captain Doug Nosbisch. Gary Pritchard told of his work in getting the marker installed and the history of the 17th Michigan Company E., also known as the Normal Company. It was named the Normal Company due to the large number of Normal College (now Eastern Michigan University) graduates and students of the college. The company fought in many of the major battles of the war. Ypsilanti’s newest marker has the following inscription: The Barracks When the Civil War began in 1861, this corner site housed a commercial building called the Norris Block. Its location across the street from the railroad station made it an ideal place for short-term lodging for enlistees waiting to be sent off to battle, and locals soon dubbed it “The Barracks.” The Ypsilanti Light Guard, a local militia company that became Company H, First Michigan Infantry, stayed here in the spring of 1861. They mustered in Detroit on May 1 and arrived in Washington, D.C., on May 16. Recruits for the Fourteenth Michigan Infantry, including 129 men from Washtenaw County, spent six months here from September 1861 to February 1862 while the regiment’s ranks were filled. The Fourteenth first saw action as part of the siege of Corinth, Mississippi. Ypsilanti in the Civil War More than 4,000 soldiers from Washtenaw County served during the Civil War. Hundreds bivouacked here, in the Norris Block, before mustering into service. More than thirty men who were students or graduates of the Michigan State Normal School (now Eastern Michigan University) joined Company E of the Seventeenth Michigan Infantry in 1862. Their first action was at South Mountain in Maryland. In December 1863, the First Michigan Colored Infantry stopped here as part of its state-wide recruiting drive. In 1902 veterans of the Twenty-Seventh Michigan Infantry held their reunion here. Since the 1880s this site has been known as the Thompson Block and has had a variety of commercial uses. Pritchard also described some of the people and organizations who helped the 17th in their dream of having a historical marker realized in Ypsilanti commemorating the veterans of the Civil War. These people were William Christen, Ted J. Ligibel PhD., Eastern Michigan University; Connie Locker, city history contact for the city of Ypsilanti; The Beal Group for doing the work of installing the marker; Matt Van Acker of the State of Michigan; the City of Ypsilanti; Jack Dempsey of the Civil War 150th Commission and Glen Anderson, State Representative. Commander Eaton of SUVCW Camp 180 was asked to speak a few words for the dedication. John Delcamp, a Son of Ypsilanti and member of the 17th, spoke about the portraits that had been painted on the wall of the building by art students from Ypsilanti High School. There are three portraits of citizens of Ypsilanti on the murals that were instrumental in the war effort. John also read a poem that was written at the war’s end that was very emotional. The unveiling of the marker was performed by Gary Pritchard and John Dempsey. Following the unveiling, a prayer was read by Capt. Nosbisch, and then a wreath was laid at the marker by Lynn Kalil representing the Ladies of the 17th. Many folks in the area were not prepared for the next event––a rifle salute followed by taps. The rifle salute was performed by members of Company E of the 17th Michigan Re-enactors. Taps was performed by another of their members. A pot-luck dinner was offered to the participants at John Delcamp’s house after the ceremonies. [Michael E. Van Wasshnova participated in the marker dedication ceremonies as a member of the Sons of Union Veterans of the Civil War (SUVCW) Camp 180 of Ann Arbor/Ypsilanti.] SIDEBAR Over 3500 State Historical Sites in Michigan 20 in Ypsilanti: Ballard House 125 N. Huron Brinkerhoff-Becker House 601 W. Forest Civil War Barracks River @ Cross Cleary College (info site) 2170 Washtenaw William M. Davis House (Ladies’ Lit) 218 N. Washington info site) Eastern Michigan College College Place @ Forest First Baptist Church 1110 W. Cross First Methodist Episcopal Church 209 Washtenaw First Presbyterian Church 300 N. Washington Hutchinson House 600 N. River Elijah McCoy (commemorative site) 229 W. Michigan MCRR Freighthouse 435 Market Place Michigan Interurbans (info site) E. Michigan & N. Park Prospect Park Prospect @ E. Cross Science & Manual Training Bldg. (Scherzer Hall) Putnam @ W. Forest Starkweather Hall 901 W. Forest Willow Run Bomber Plant Tyler/Hudson @ US 12 Ypsilanti Area (Ypsilanti Historical Society Museum) 220 N. Huron Ypsilanti Historic District Approximately 200 properties Ypsilanti Water Works Stand Pipe (water tower) Cross @ Summit

2. Camp 427 of Dearborn in front of the Ypsilanti High School paintings

3. Camp 180 from Ann Arbor/Ypsilanti in front of the marker