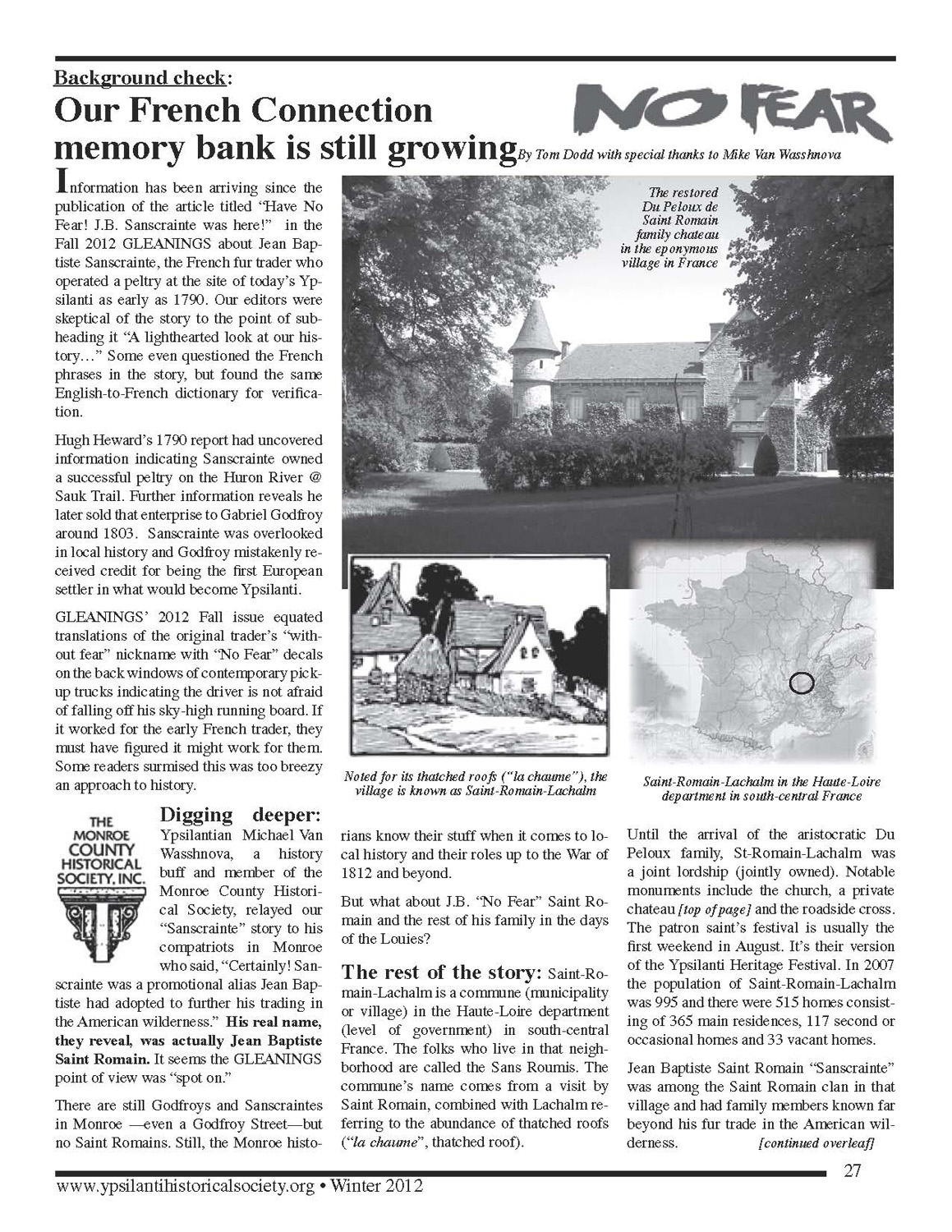 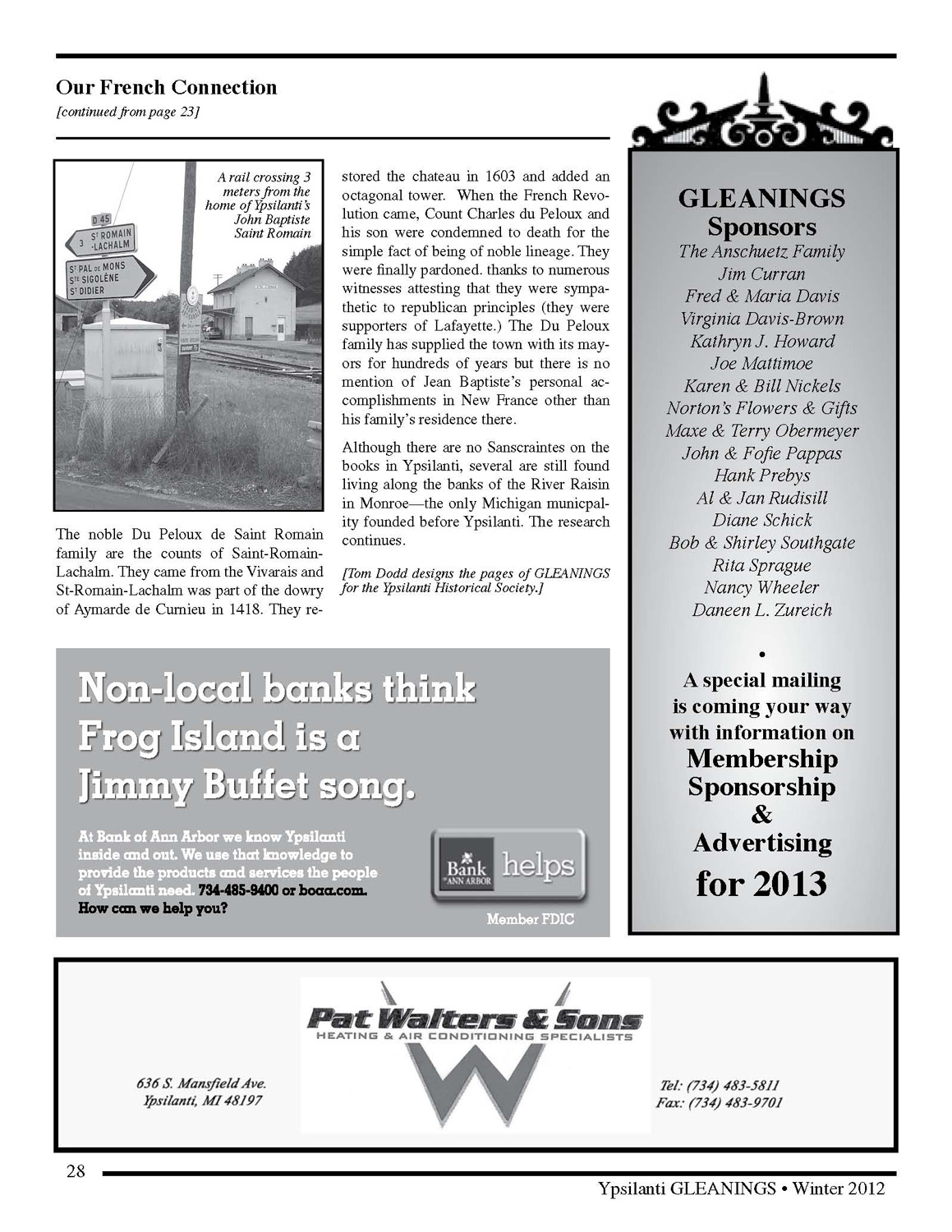 Information has been arriving since the publication of the article titled “Have No Fear! J.B. Sanscrainte was here!” in the Fall 2012 GLEANINGS about Jean Baptiste Sanscrainte, the French fur trader who operated a peltry at the site of today’s Ypsilanti as early as 1790. Our editors were skeptical of the story to the point of sub-heading it “A lighthearted look at our history…” Some even questioned the French phrases in the story, but found the same English-to-French dictionary for verification. Hugh Heward’s 1790 report had uncovered information indicating Sanscrainte owned a successful peltry on the Huron River @ Sauk Trail. Further information reveals he later sold that enterprise to Gabriel Godfroy around 1803. Sanscrainte was overlooked in local history and Godfroy mistakenly received credit for being the first European settler in what would become Ypsilanti. GLEANINGS’ 2012 Fall issue equated translations of the original trader’s “without fear” nickname with “No Fear” decals on the back windows of contemporary pick-up trucks indicating the driver is not afraid of falling off his sky-high running board. If it worked for the early French trader, they must have figured it might work for them. Some readers surmised this was too breezy an approach to history. Digging deeper: Ypsilantian Michael Van Wasshnova, a history buff and member of the Monroe County Historical Society, relayed our “Sanscrainte” story to his compatriots in Monroe who said, “Certainly! Sanscrainte was a promotional alias Jean Baptiste had adopted to further his trading in the American wilderness.” His real name, they reveal, was actually Jean Baptiste Saint Romain. It seems the GLEANINGS point of view was “spot on.” There are still Godfroys and Sanscraintes in Monroe ––even a Godfroy Street––but no Saint Romains. Still, the Monroe historians know their stuff when it comes to local history and their roles up to the War of 1812 and beyond. But what about J.B. “No Fear” Saint Romain and the rest of his family in the days of the Louies? The rest of the story: Saint-Romain-Lachalm is a commune (municipality or village) in the Haute-Loire department (level of government) in south-central France. The folks who live in that neighborhood are called the Sans Roumis. The commune’s name comes from a visit by Saint Romain, combined with Lachalm referring to the abundance of thatched roofs (“la chaume”, thatched roof). Until the arrival of the aristocratic Du Peloux family, St-Romain-Lachalm was a joint lordship (jointly owned). Notable monuments include the church, a private chateau [top of page] and the roadside cross. The patron saint’s festival is usually the first weekend in August. It’s their version of the Ypsilanti Heritage Festival. In 2007 the population of Saint-Romain-Lachalm was 995 and there were 515 homes consisting of 365 main residences, 117 second or occasional homes and 33 vacant homes. Jean Baptiste Saint Romain “Sanscrainte” was among the Saint Romain clan in that village and had family members known far beyond his fur trade in the American wilderness. The noble Du Peloux de Saint Romain family are the counts of Saint-Romain-Lachalm. They came from the Vivarais and St-Romain-Lachalm was part of the dowry of Aymarde de Curnieu in 1418. They restored the chateau in 1603 and added an octagonal tower. When the French Revolution came, Count Charles du Peloux and his son were condemned to death for the simple fact of being of noble lineage. They were finally pardoned. thanks to numerous witnesses attesting that they were sympathetic to republican principles (they were supporters of Lafayette.) The Du Peloux family has supplied the town with its mayors for hundreds of years but there is no mention of Jean Baptiste’s personal accomplishments in New France other than his family’s residence there. Although there are no Sanscraintes on the books in Ypsilanti, several are still found living along the banks of the River Raisin in Monroe––the only Michigan municipality founded before Ypsilanti. The research continues. [Tom Dodd designs the pages of GLEANINGS for the Ypsilanti Historical Society.]

2. A rail crossing 3 meters from the home of Ypsilanti’s John Baptiste Saint Romain