The “Buzz” about Bees or “Beeing” Aware in Ypsilanti 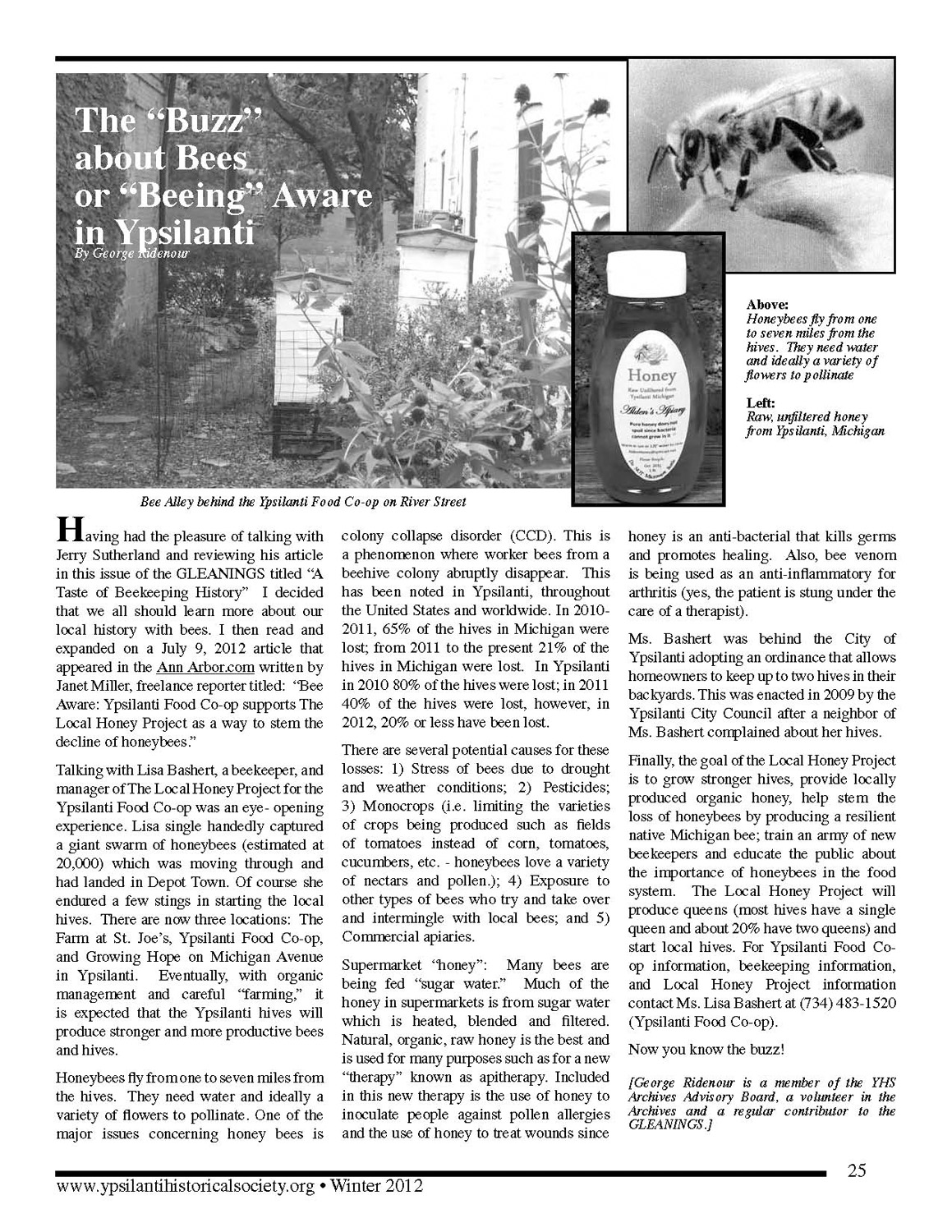 Having had the pleasure of talking with Jerry Sutherland and reviewing his article in this issue of the GLEANINGS titled “A Taste of Beekeeping History” I decided that we all should learn more about our local history with bees. I then read and expanded on a July 9, 2012 article that appeared in the Ann Arbor.com written by Janet Miller, freelance reporter titled: “Bee Aware: Ypsilanti Food Co-op supports The Local Honey Project as a way to stem the decline of honeybees.” Talking with Lisa Bashert, a beekeeper, and manager of The Local Honey Project for the Ypsilanti Food Co-op was an eye- opening experience. Lisa single handedly captured a giant swarm of honeybees (estimated at 20,000) which was moving through and had landed in Depot Town. Of course she endured a few stings in starting the local hives. There are now three locations: The Farm at St. Joe’s, Ypsilanti Food Co-op, and Growing Hope on Michigan Avenue in Ypsilanti. Eventually, with organic management and careful “farming,” it is expected that the Ypsilanti hives will produce stronger and more productive bees and hives. Honeybees fly from one to seven miles from the hives. They need water and ideally a variety of flowers to pollinate. One of the major issues concerning honey bees is colony collapse disorder (CCD). This is a phenomenon where worker bees from a beehive colony abruptly disappear. This has been noted in Ypsilanti, throughout the United States and worldwide. In 2010-2011, 65% of the hives in Michigan were lost; from 2011 to the present 21% of the hives in Michigan were lost. In Ypsilanti in 2010 80% of the hives were lost; in 2011 40% of the hives were lost, however, in 2012, 20% or less have been lost. There are several potential causes for these losses: 1) Stress of bees due to drought and weather conditions; 2) Pesticides; 3) Monocrops (i.e. limiting the varieties of crops being produced such as fields of tomatoes instead of corn, tomatoes, cucumbers, etc. - honeybees love a variety of nectars and pollen.); 4) Exposure to other types of bees who try and take over and intermingle with local bees; and 5) Commercial apiaries. Supermarket “honey”: Many bees are being fed “sugar water.” Much of the honey in supermarkets is from sugar water which is heated, blended and filtered. Natural, organic, raw honey is the best and is used for many purposes such as for a new “therapy” known as apitherapy. Included in this new therapy is the use of honey to inoculate people against pollen allergies and the use of honey to treat wounds since honey is an anti-bacterial that kills germs and promotes healing. Also, bee venom is being used as an anti-inflammatory for arthritis (yes, the patient is stung under the care of a therapist) Ms. Bashert was behind the City of Ypsilanti adopting an ordinance that allows homeowners to keep up to two hives in their backyards. This was enacted in 2009 by the Ypsilanti City Council after a neighbor of Ms. Bashert complained about her hives. Finally, the goal of the Local Honey Project is to grow stronger hives, provide locally produced organic honey, help stem the loss of honeybees by producing a resilient native Michigan bee; train an army of new beekeepers and educate the public about the importance of honeybees in the food system. The Local Honey Project will produce queens (most hives have a single queen and about 20% have two queens) and start local hives. For Ypsilanti Food Co-op information, beekeeping information, and Local Honey Project information contact Ms. Lisa Bashert at (734) 483-1520 (Ypsilanti Food Co-op). Now you know the buzz! [George Ridenour is a member of the YHS Archives Advisory Board, a volunteer in the Archives and a regular contributor to the GLEANINGS.]

Photo Captions: 1. Bee Alley behind the Ypsilanti Food Co-op on River Street 2. Honeybees fly from one to seven miles from the hives. They need water and ideally a variety of flowers to pollinate 3. Raw, unfiltered honey from Ypsilanti, Michigan