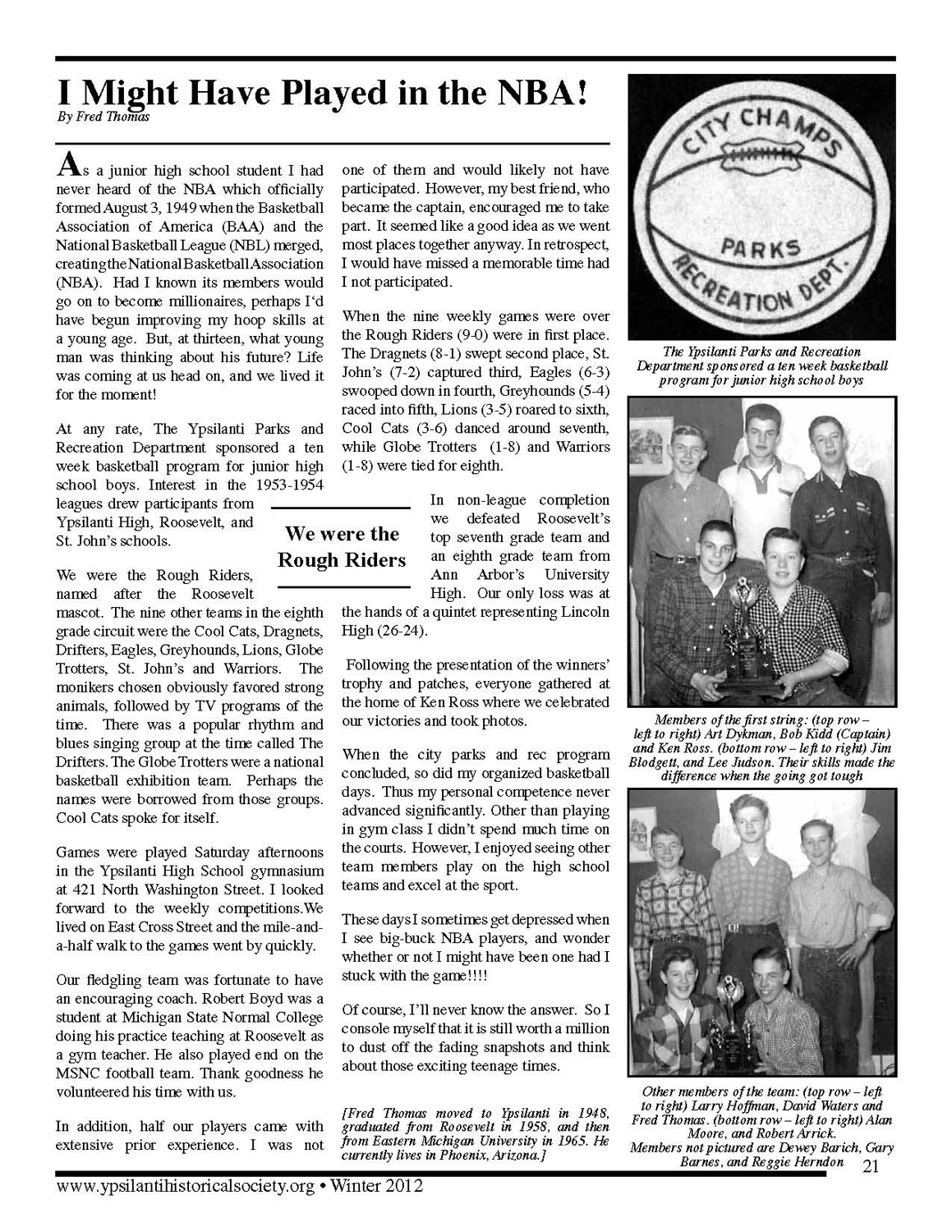 As a junior high school student I had never heard of the NBA which officially formed August 3, 1949 when the Basketball Association of America (BAA) and the National Basketball League (NBL) merged, creating the National Basketball Association (NBA). Had I known its members would go on to become millionaires, perhaps I‘d have begun improving my hoop skills at a young age. But, at thirteen, what young man was thinking about his future? Life was coming at us head on, and we lived it for the moment!

We were the Rough Riders, named after the Roosevelt mascot. The nine other teams in the eighth grade circuit were the Cool Cats, Dragnets, Drifters, Eagles, Greyhounds, Lions, Globe Trotters, St. John’s and Warriors. The monikers chosen obviously favored strong animals, followed by TV programs of the time. There was a popular rhythm and blues singing group at the time called The Drifters. The Globe Trotters were a national basketball exhibition team. Perhaps the names were borrowed from those groups. Cool Cats spoke for itself.

Games were played Saturday afternoons in the Ypsilanti High School gymnasium at 421 North Washington Street. I looked forward to the weekly competitions.We lived on East Cross Street and the mile-and-a-half walk to the games went by quickly.

Our fledgling team was fortunate to have an encouraging coach. Robert Boyd was a student at Michigan State Normal College doing his practice teaching at Roosevelt as a gym teacher. He also played end on the MSNC football team. Thank goodness he volunteered his time with us.

In addition, half our players came with extensive prior experience. I was not one of them and would likely not have participated. However, my best friend, who became the captain, encouraged me to take part. It seemed like a good idea as we went most places together anyway. In retrospect, I would have missed a memorable time had I not participated.

When the nine weekly games were over the Rough Riders (9-0) were in first place. The Dragnets (8-1) swept second place, St. John’s (7-2) captured third, Eagles (6-3) swooped down in fourth, Greyhounds (5-4) raced into fifth, Lions (3-5) roared to sixth, Cool Cats (3-6) danced around seventh, while Globe Trotters (1-8) and Warriors (1-8) were tied for eighth.
In non-league completion we defeated Roosevelt’s top seventh grade team and an eighth grade team from Ann Arbor’s University High. Our only loss was at the hands of a quintet representing Lincoln High (26-24).

Following the presentation of the winners’ trophy and patches, everyone gathered at the home of Ken Ross where we celebrated our victories and took photos.

When the city parks and rec program concluded, so did my organized basketball days. Thus my personal competence never advanced significantly. Other than playing in gym class I didn’t spend much time on the courts. However, I enjoyed seeing other team members play on the high school teams and excel at the sport.

These days I sometimes get depressed when I see big-buck NBA players, and wonder whether or not I might have been one had I stuck with the game!!!!
Of course, I’ll never know the answer. So I console myself that it is still worth a million to dust off the fading snapshots and think about those exciting teenage times.

[Fred Thomas moved to Ypsilanti in 1948, graduated from Roosevelt in 1958, and then from Eastern Michigan University in 1965. He currently lives in Phoenix, Arizona.]