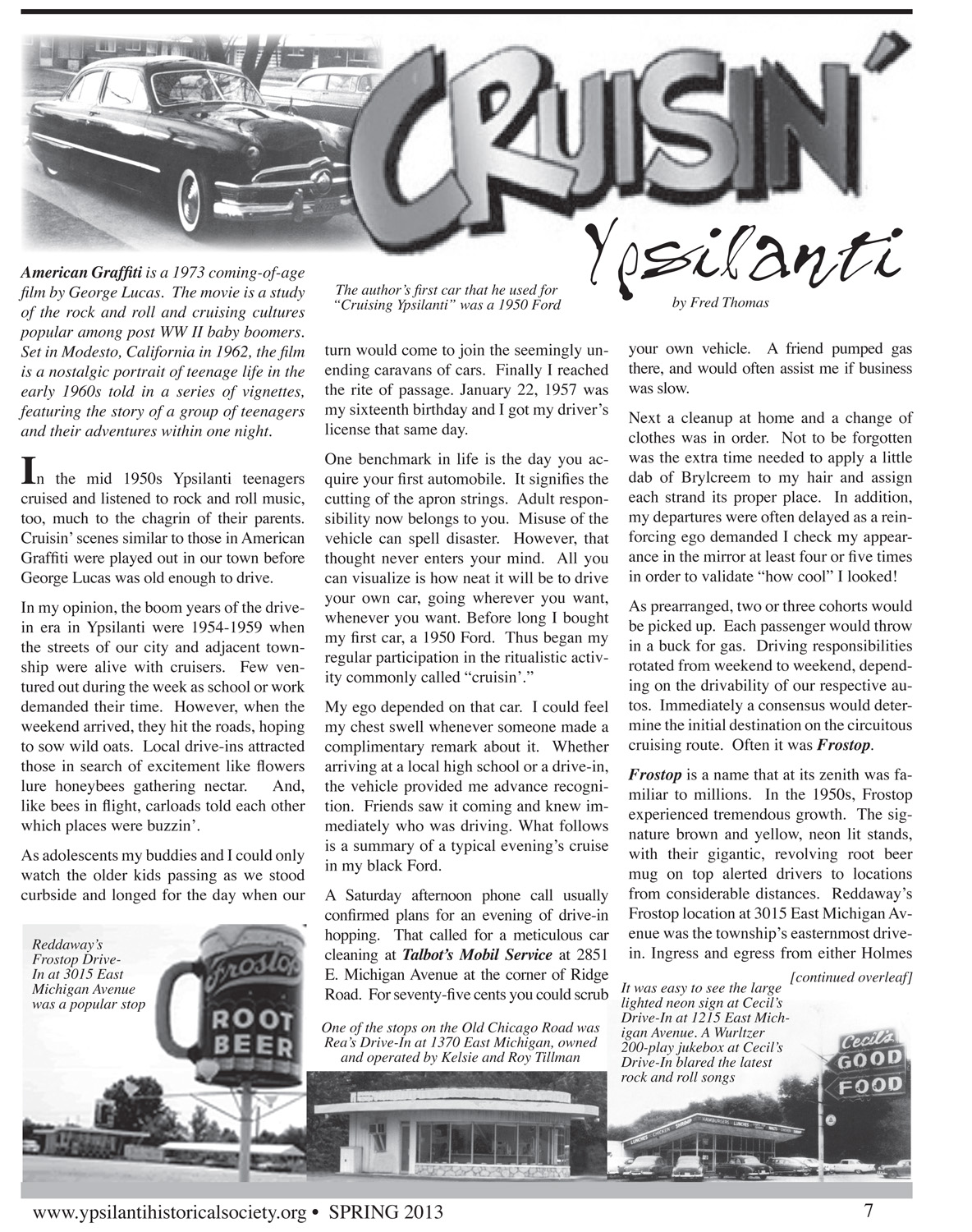 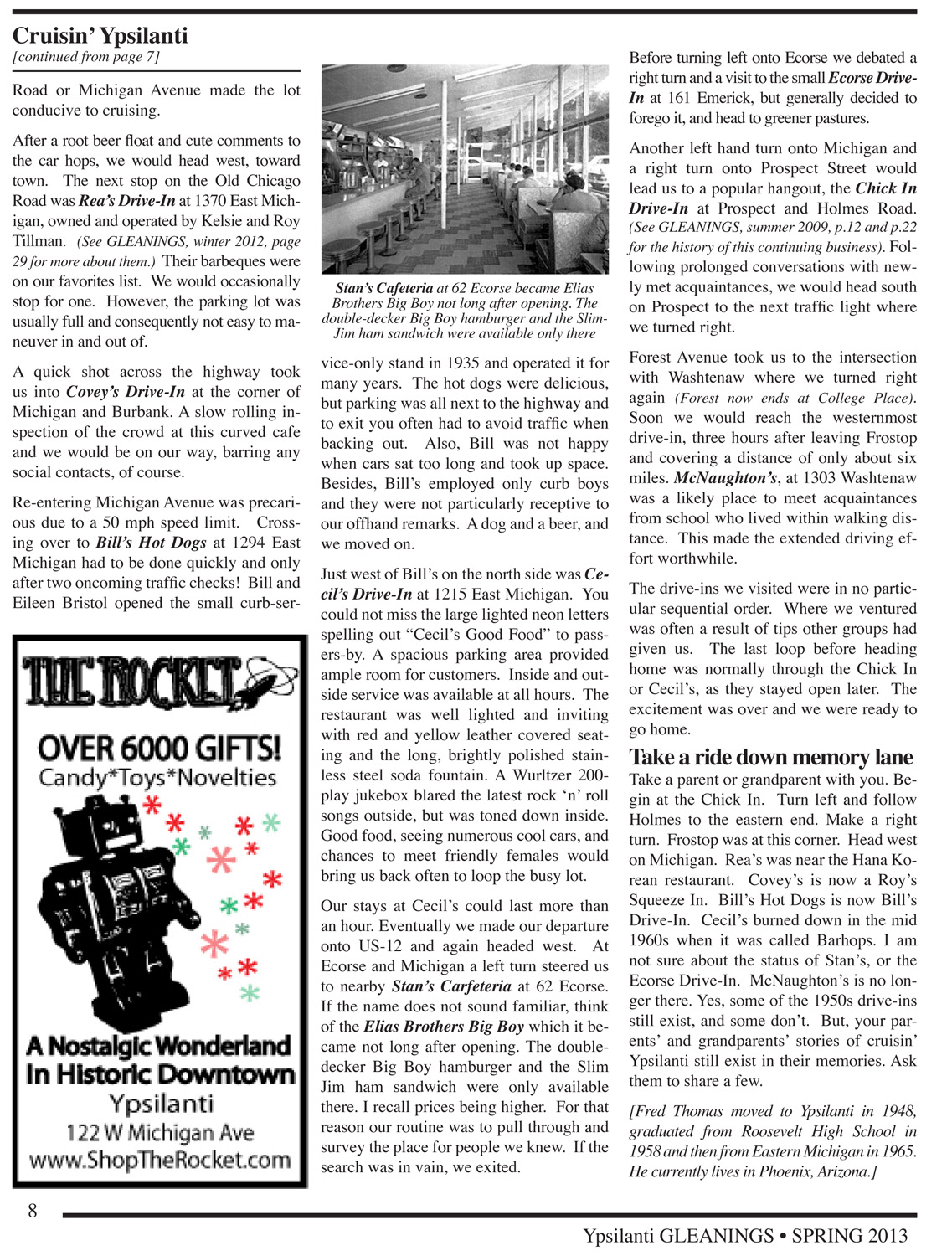 American Graffiti is a 1973 coming-of-age film by George Lucas. The movie is a study of the rock and roll and cruising cultures popular among post WW II baby boomers. Set in Modesto, California in 1962, the film is a nostalgic portrait of teenage life in the early 1960s told in a series of vignettes, featuring the story of a group of teenagers and their adventures within one night.

In the mid 1950s Ypsilanti teenagers cruised and listened to rock and roll music, too, much to the chagrin of their parents. Cruisin’ scenes similar to those in American Graffiti were played out in our town before George Lucas was old enough to drive.

In my opinion, the boom years of the drive-in era in Ypsilanti were 1954-1959 when the streets of our city and adjacent township were alive with cruisers. Few ventured out during the week as school or work demanded their time. However, when the weekend arrived, they hit the roads, hoping to sow wild oats. Local drive-ins attracted those in search of excitement like flowers lure honeybees gathering nectar. And, like bees in flight, carloads told each other which places were buzzin’.

As adolescents my buddies and I could only watch the older kids passing as we stood curbside and longed for the day when our turn would come to join the seemingly unending caravans of cars. Finally I reached the rite of passage. January 22, 1957 was my sixteenth birthday and I got my driver’s license that same day.

One benchmark in life is the day you acquire your first automobile. It signifies the cutting of the apron strings. Adult responsibility now belongs to you. Misuse of the vehicle can spell disaster. However, that thought never enters your mind. All you can visualize is how neat it will be to drive your own car, going wherever you want, whenever you want. Before long I bought my first car, a 1950 Ford. Thus began my regular participation in the ritualistic activity commonly called “cruisin’.”

My ego depended on that car. I could feel my chest swell whenever someone made a complimentary remark about it. Whether arriving at a local high school or a drive-in, the vehicle provided me advance recognition. Friends saw it coming and knew immediately who was driving. What follows is a summary of a typical evening’s cruise in my black Ford.

A Saturday afternoon phone call usually confirmed plans for an evening of drive-in hopping. That called for a meticulous car cleaning at Talbot’s Mobil Service at 2851 E. Michigan Avenue at the corner of Ridge Road. For seventy-five cents you could scrub your own vehicle. A friend pumped gas there, and would often assist me if business was slow.

Next a cleanup at home and a change of clothes was in order. Not to be forgotten was the extra time needed to apply a little dab of Brylcreem to my hair and assign each strand its proper place. In addition, my departures were often delayed as a reinforcing ego demanded I check my appearance in the mirror at least four or five times in order to validate “how cool” I looked!

As prearranged, two or three cohorts would be picked up. Each passenger would throw in a buck for gas. Driving responsibilities rotated from weekend to weekend, depending on the drivability of our respective autos. Immediately a consensus would determine the initial destination on the circuitous cruising route. Often it was Frostop.

Frostop is a name that at its zenith was familiar to millions. In the 1950s, Frostop experienced tremendous growth. The signature brown and yellow, neon lit stands, with their gigantic, revolving root beer mug on top alerted drivers to locations from considerable distances. Reddaway’s Frostop location at 3015 East Michigan Avenue was the township’s easternmost drive-in. Ingress and egress from either Holmes Road or Michigan Avenue made the lot conducive to cruising.

After a root beer float and cute comments to the car hops, we would head west, toward town. The next stop on the Old Chicago Road was Rea’s Drive-In at 1370 East Michigan, owned and operated by Kelsie and Roy Tillman. (See GLEANINGS, winter 2012, page 29 for more about them.) Their barbeques were on our favorites list. We would occasionally stop for one. However, the parking lot was usually full and consequently not easy to maneuver in and out of.

A quick shot across the highway took us into Covey’s Drive-In at the corner of Michigan and Burbank. A slow rolling inspection of the crowd at this curved cafe and we would be on our way, barring any social contacts, of course.

Re-entering Michigan Avenue was precarious due to a 50 mph speed limit. Crossing over to Bill’s Hot Dogs at 1294 East Michigan had to be done quickly and only after two oncoming traffic checks! Bill and Eileen Bristol opened the small curb-service-only stand in 1935 and operated it for many years. The hot dogs were delicious, but parking was all next to the highway and to exit you often had to avoid traffic when backing out. Also, Bill was not happy when cars sat too long and took up space. Besides, Bill’s employed only curb boys and they were not particularly receptive to our offhand remarks. A dog and a beer, and we moved on.

Just west of Bill’s on the north side was Cecil’s Drive-In at 1215 East Michigan. You could not miss the large lighted neon letters spelling out “Cecil’s Good Food” to passers-by. A spacious parking area provided ample room for customers. Inside and outside service was available at all hours. The restaurant was well lighted and inviting with red and yellow leather covered seating and the long, brightly polished stainless steel soda fountain. A Wurlitzer 200- play jukebox blared the latest rock ‘n’ roll songs outside, but was toned down inside. Good food, seeing numerous cool cars, and chances to meet friendly females would bring us back often to loop the busy lot.

Our stays at Cecil’s could last more than an hour. Eventually we made our departure onto US-12 and again headed west. At Ecorse and Michigan a left turn steered us to nearby Stan’s Carfeteria at 62 Ecorse. If the name does not sound familiar, think of the Elias Brothers Big Boy which it became not long after opening. The double-decker Big Boy hamburger and the Slim Jim ham sandwich were only available there. I recall prices being higher. For that reason our routine was to pull through and survey the place for people we knew. If the search was in vain, we exited.

Before turning left onto Ecorse we debated a right turn and a visit to the small Ecorse Drive-In at 161 Emerick, but generally decided to forego it, and head to greener pastures.

Another left hand turn onto Michigan and a right turn onto Prospect Street would lead us to a popular hangout, the Chick In Drive-In at Prospect and Holmes Road. (See GLEANINGS, summer 2009, p.12 and p.22 for the history of this continuing business). Following prolonged conversations with newly met acquaintances, we would head south on Prospect to the next traffic light where we turned right.

Forest Avenue took us to the intersection with Washtenaw where we turned right again (Forest now ends at College Place). Soon we would reach the westernmost drive-in, three hours after leaving Frostop and covering a distance of only about six miles. McNaughton’s, at 1303 Washtenaw was a likely place to meet acquaintances from school who lived within walking distance. This made the extended driving effort worthwhile.

The drive-ins we visited were in no particular sequential order. Where we ventured was often a result of tips other groups had given us. The last loop before heading home was normally through the Chick In or Cecil’s, as they stayed open later. The excitement was over and we were ready to go home.

Take a ride down memory lane
Take a parent or grandparent with you. Begin at the Chick In. Turn left and follow Holmes to the eastern end. Make a right turn. Frostop was at this corner. Head west on Michigan. Rea’s was near the Hana Korean restaurant. Covey’s is now a Roy’s Squeeze In. Bill’s Hot Dogs is now Bill’s Drive-In. Cecil’s burned down in the mid 1960s when it was called Barhops. I am not sure about the status of Stan’s, or the Ecorse Drive-In. McNaughton’s is no longer there. Yes, some of the 1950s drive-ins still exist, and some don’t. But, your parents’ and grandparents’ stories of cruisin’ Ypsilanti still exist in their memories. Ask them to share a few.

[Fred Thomas moved to Ypsilanti in 1948, graduated from Roosevelt High School in 1958 and then from Eastern Michigan in 1965. He currently lives in Phoenix, Arizona.]

3. One of the stops on the Old Chicago Road was Rea’s Drive-In at 1370 East Michigan, owned and operated by Kelsie and Roy Tillman

5. Stan’s Cafeteria at 62 Ecorse became Elias Brothers Big Boy not long after opening. The double-decker Big Boy hamburger and the SlimJim ham sandwich were available only there