How did it get there? The Consolidated B-24 “Liberator” bomber 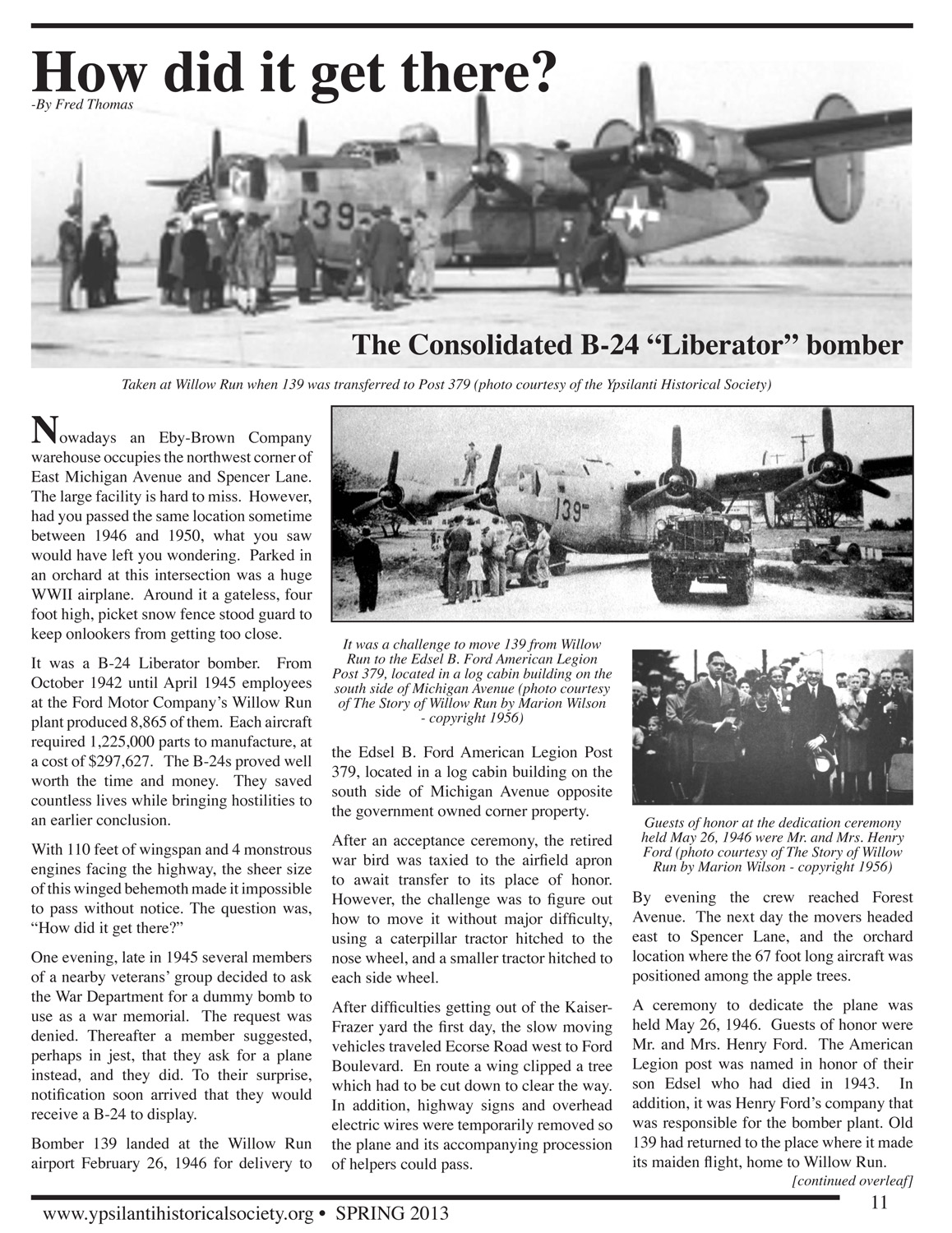 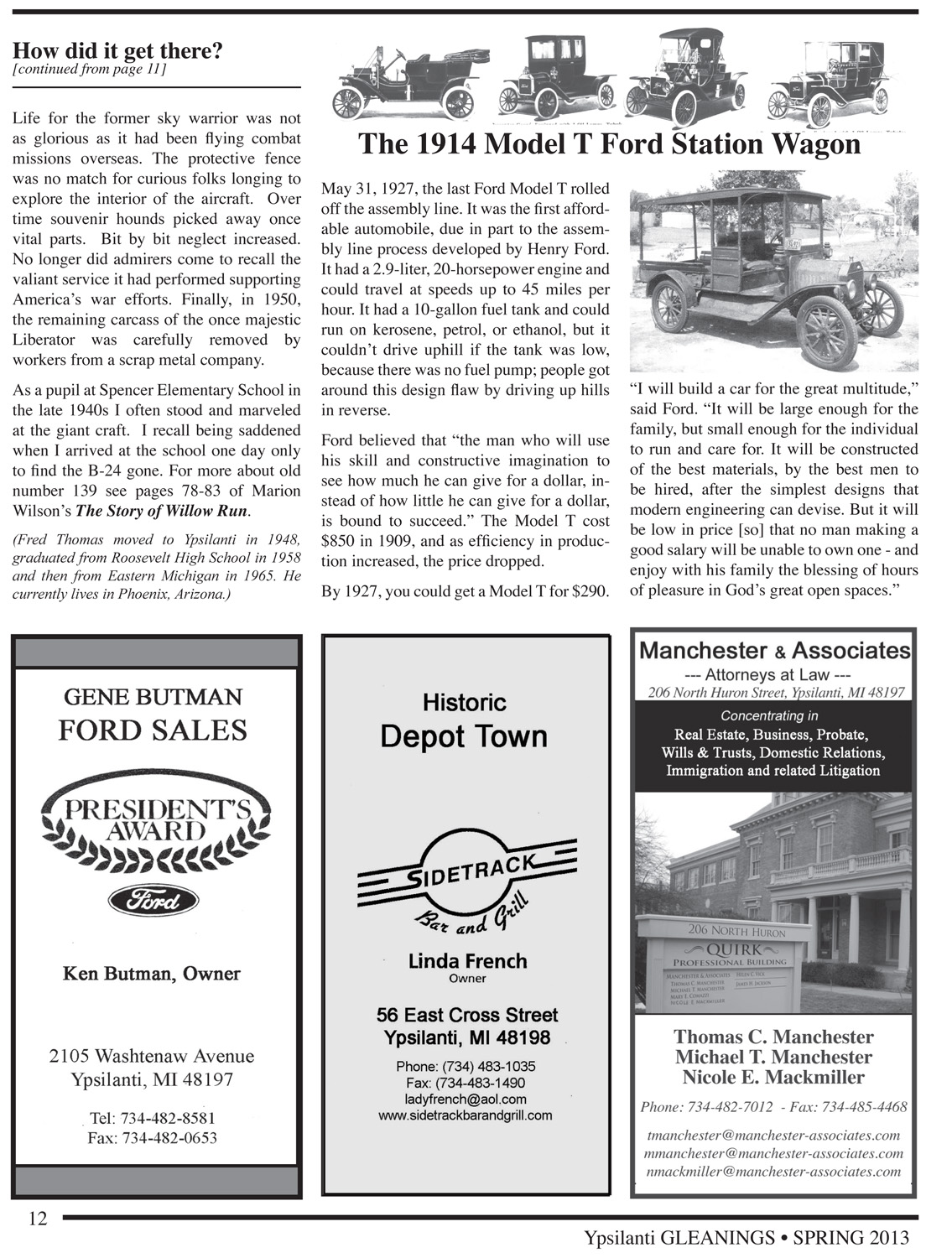 Nowadays an Eby-Brown Company warehouse occupies the northwest corner of East Michigan Avenue and Spencer Lane. The large facility is hard to miss. However, had you passed the same location sometime between 1946 and 1950, what you saw would have left you wondering. Parked in an orchard at this intersection was a huge WWII airplane. Around it a gateless, four foot high, picket snow fence stood guard to keep onlookers from getting too close.

It was a B-24 Liberator bomber. From October 1942 until April 1945 employees at the Ford Motor Company’s Willow Run plant produced 8,865 of them. Each aircraft required 1,225,000 parts to manufacture, at a cost of $297,627. The B-24s proved well worth the time and money. They saved countless lives while bringing hostilities to an earlier conclusion.

With 110 feet of wingspan and 4 monstrous engines facing the highway, the sheer size of this winged behemoth made it impossible to pass without notice. The question was, “How did it get there?”

One evening, late in 1945 several members of a nearby veterans’ group decided to ask the War Department for a dummy bomb to use as a war memorial. The request was denied. Thereafter a member suggested, perhaps in jest, that they ask for a plane instead, and they did. To their surprise, notification soon arrived that they would receive a B-24 to display.

Bomber 139 landed at the Willow Run airport February 26, 1946 for delivery to the Edsel B. Ford American Legion Post 379, located in a log cabin building on the south side of Michigan Avenue opposite the government owned corner property.

After an acceptance ceremony, the retired war bird was taxied to the airfield apron to await transfer to its place of honor. However, the challenge was to figure out how to move it without major difficulty, using a caterpillar tractor hitched to the nose wheel, and a smaller tractor hitched to each side wheel.

After difficulties getting out of the Kaiser-Frazer yard the first day, the slow moving vehicles traveled Ecorse Road west to Ford Boulevard. En route a wing clipped a tree which had to be cut down to clear the way. In addition, highway signs and overhead electric wires were temporarily removed so the plane and its accompanying procession of helpers could pass.

By evening the crew reached Forest Avenue. The next day the movers headed east to Spencer Lane, and the orchard location where the 67 foot long aircraft was positioned among the apple trees.

A ceremony to dedicate the plane was held May 26, 1946. Guests of honor were Mr. and Mrs. Henry Ford. The American Legion post was named in honor of their son Edsel who had died in 1943. In addition, it was Henry Ford’s company that was responsible for the bomber plant. Old 139 had returned to the place where it made its maiden flight, home to Willow Run.

Life for the former sky warrior was not as glorious as it had been flying combat missions overseas. The protective fence was no match for curious folks longing to explore the interior of the aircraft. Over time souvenir hounds picked away once vital parts. Bit by bit neglect increased. No longer did admirers come to recall the valiant service it had performed supporting America’s war efforts. Finally, in 1950, the remaining carcass of the once majestic Liberator was carefully removed by workers from a scrap metal company.

As a pupil at Spencer Elementary School in the late 1940s I often stood and marveled at the giant craft. I recall being saddened when I arrived at the school one day only to find the B-24 gone. For more about old number 139 see pages 78-83 of Marion Wilson’s The Story of Willow Run.

(Fred Thomas moved to Ypsilanti in 1948, graduated from Roosevelt High School in 1958 and then from Eastern Michigan in 1965. He currently lives in Phoenix, Arizona.)

1. Taken at Willow Run when 139 was transferred to Post 379 (photo courtesy of the Ypsilanti Historical Society)

2. It was a challenge to move 139 from Willow Run to the Edsel B. Ford American Legion Post 379, located in a log cabin building on the south side of Michigan Avenue (photo courtesy of The Story of Willow Run by Marion Wilson - copyright 1956)

3. Guests of honor at the dedication ceremony held May 26, 1946 were Mr. and Mrs. Henry Ford (photo courtesy of The Story of Willow Run by Marion Wilson - copyright 1956)