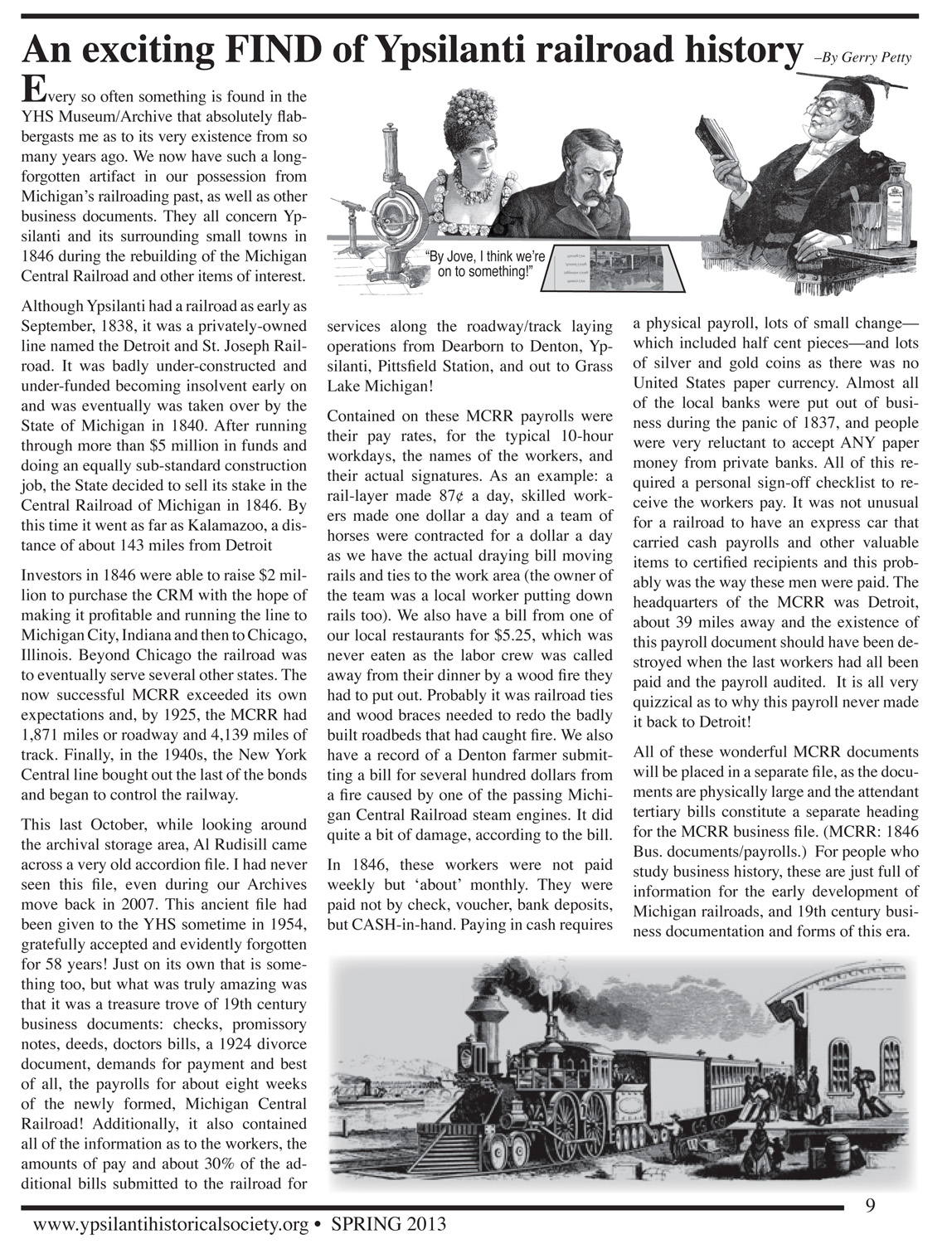 Every so often something is found in the YHS Museum/Archive that absolutely flabbergasts me as to its very existence from so many years ago. We now have such a long-forgotten artifact in our possession from Michigan’s railroading past, as well as other business documents. They all concern Ypsilanti and its surrounding small towns in 1846 during the rebuilding of the Michigan Central Railroad and other items of interest.

Although Ypsilanti had a railroad as early as September, 1838, it was a privately-owned line named the Detroit and St. Joseph Railroad. It was badly under-constructed and under-funded becoming insolvent early on and was eventually was taken over by the State of Michigan in 1840. After running through more than $5 million in funds and doing an equally sub-standard construction job, the State decided to sell its stake in the Central Railroad of Michigan in 1846. By this time it went as far as Kalamazoo, a distance of about 143 miles from Detroit

Investors in 1846 were able to raise $2 million to purchase the CRM with the hope of making it profitable and running the line to Michigan City, Indiana and then to Chicago, Illinois. Beyond Chicago the railroad was to eventually serve several other states. The now successful MCRR exceeded its own expectations and, by 1925, the MCRR had 1,871 miles or roadway and 4,139 miles of track. Finally, in the 1940s, the New York Central line bought out the last of the bonds and began to control the railway.

This last October, while looking around the archival storage area, Al Rudisill came across a very old accordion file. I had never seen this file, even during our Archives move back in 2007. This ancient file had been given to the YHS sometime in 1954, gratefully accepted and evidently forgotten for 58 years! Just on its own that is something too, but what was truly amazing was that it was a treasure trove of 19th century business documents: checks, promissory notes, deeds, doctors bills, a 1924 divorce document, demands for payment and best of all, the payrolls for about eight weeks of the newly formed, Michigan Central Railroad! Additionally, it also contained all of the information as to the workers, the amounts of pay and about 30% of the additional bills submitted to the railroad for services along the roadway/track laying operations from Dearborn to Denton, Ypsilanti, Pittsfield Station, and out to Grass Lake Michigan!

Contained on these MCRR payrolls were their pay rates, for the typical 10-hour workdays, the names of the workers, and their actual signatures. As an example: a rail-layer made 87¢ a day, skilled workers made one dollar a day and a team of horses were contracted for a dollar a day as we have the actual draying bill moving rails and ties to the work area (the owner of the team was a local worker putting down rails too). We also have a bill from one of our local restaurants for $5.25, which was never eaten as the labor crew was called away from their dinner by a wood fire they had to put out. Probably it was railroad ties and wood braces needed to redo the badly built roadbeds that had caught fire. We also have a record of a Denton farmer submitting a bill for several hundred dollars from a fire caused by one of the passing Michigan Central Railroad steam engines. It did quite a bit of damage, according to the bill.

In 1846, these workers were not paid weekly but ‘about’ monthly. They were paid not by check, voucher, bank deposits, but CASH-in-hand. Paying in cash requires a physical payroll, lots of small change––which included half cent pieces––and lots of silver and gold coins as there was no United States paper currency. Almost all of the local banks were put out of business during the panic of 1837, and people were very reluctant to accept ANY paper money from private banks. All of this required a personal sign-off checklist to receive the workers pay. It was not unusual for a railroad to have an express car that carried cash payrolls and other valuable items to certified recipients and this probably was the way these men were paid. The headquarters of the MCRR was Detroit, about 39 miles away and the existence of this payroll document should have been destroyed when the last workers had all been paid and the payroll audited. It is all very quizzical as to why this payroll never made it back to Detroit!

All of these wonderful MCRR documents will be placed in a separate file, as the documents are physically large and the attendant tertiary bills constitute a separate heading for the MCRR business file. (MCRR: 1846 Bus. documents/payrolls.) For people who study business history, these are just full of information for the early development of Michigan railroads, and 19th century business documentation and forms of this era.