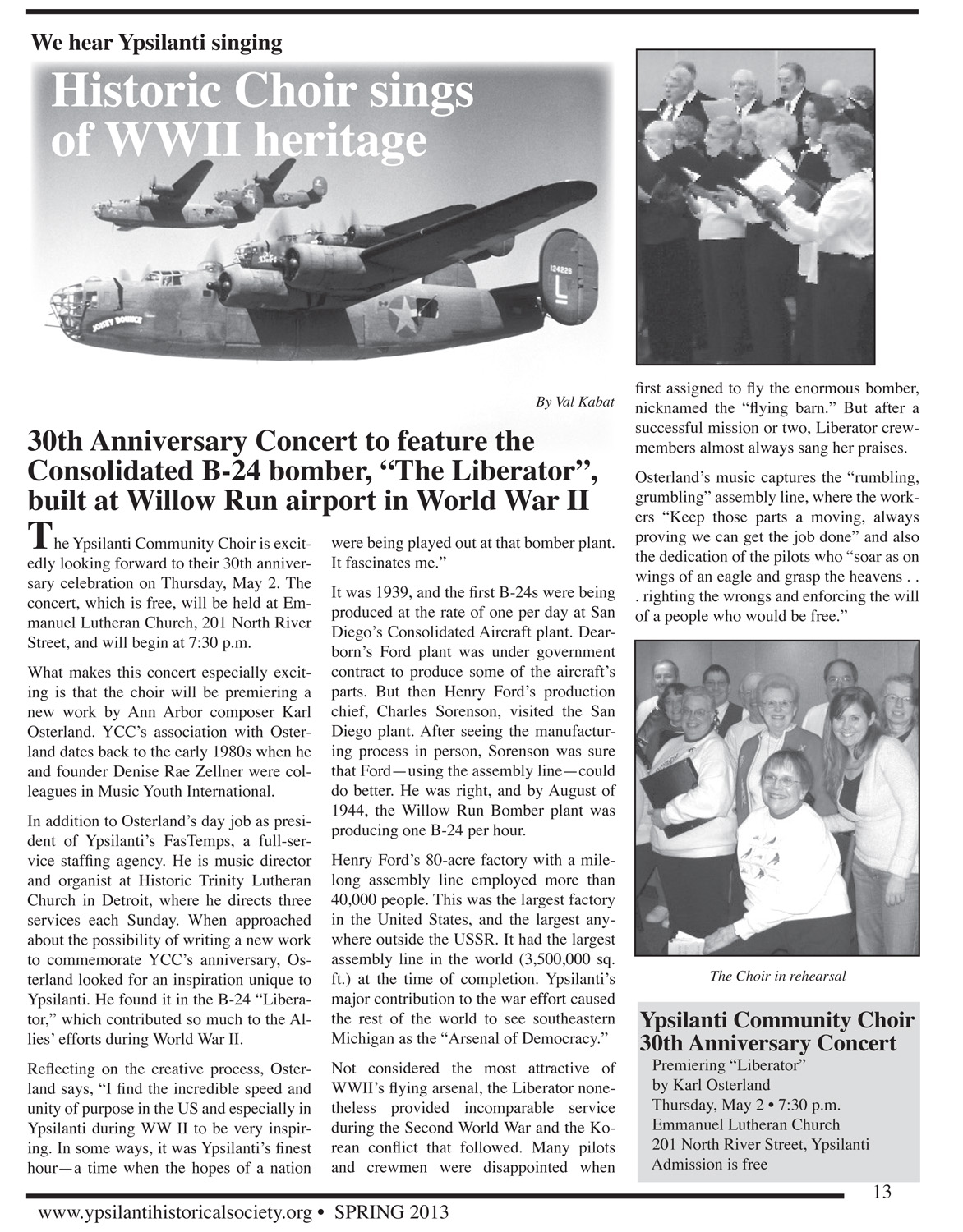 30th Anniversary Concert to feature the Consolidated B-24 bomber, “The Liberator”, built at Willow Run airport in World War II

The Ypsilanti Community Choir is excitedly looking forward to their 30th anniversary celebration on Thursday, May 2. The concert, which is free, will be held at Emmanuel Lutheran Church, 201 North River Street, and will begin at 7:30 p.m.

What makes this concert especially exciting is that the choir will be premiering a new work by Ann Arbor composer Karl Osterland. YCC’s association with Osterland dates back to the early 1980s when he and founder Denise Rae Zellner were colleagues in Music Youth International.

In addition to Osterland’s day job as president of Ypsilanti’s FasTemps, a full-service staffing agency. He is music director and organist at Historic Trinity Lutheran Church in Detroit, where he directs three services each Sunday. When approached about the possibility of writing a new work to commemorate YCC’s anniversary, Osterland looked for an inspiration unique to Ypsilanti. He found it in the B-24 “Liberator,” which contributed so much to the Allies’ efforts during World War II.

Reflecting on the creative process, Osterland says, “I find the incredible speed and unity of purpose in the US and especially in Ypsilanti during WW II to be very inspiring. In some ways, it was Ypsilanti’s finest hour—a time when the hopes of a nation were being played out at that bomber plant. It fascinates me.”

It was 1939, and the first B-24s were being produced at the rate of one per day at San Diego’s Consolidated Aircraft plant. Dearborn’s Ford plant was under government contract to produce some of the aircraft’s parts. But then Henry Ford’s production chief, Charles Sorenson, visited the San Diego plant. After seeing the manufacturing process in person, Sorenson was sure that Ford—using the assembly line—could do better. He was right, and by August of 1944, the Willow Run Bomber plant was producing one B-24 per hour.

Henry Ford’s 80-acre factory with a mile-long assembly line employed more than 40,000 people. This was the largest factory in the United States, and the largest anywhere outside the USSR. It had the largest assembly line in the world (3,500,000 sq. ft.) at the time of completion. Ypsilanti’s major contribution to the war effort caused the rest of the world to see southeastern Michigan as the “Arsenal of Democracy.”

Not considered the most attractive of WWII’s flying arsenal, the Liberator nonetheless provided incomparable service during the Second World War and the Korean conflict that followed. Many pilots and crewmen were disappointed when first assigned to fly the enormous bomber, nicknamed the “flying barn.” But after a successful mission or two, Liberator crewmembers almost always sang her praises.

Osterland’s music captures the “rumbling, grumbling” assembly line, where the workers “Keep those parts a moving, always proving we can get the job done” and also the dedication of the pilots who “soar as on wings of an eagle and grasp the heavens . . . righting the wrongs and enforcing the will of a people who would be free.”

3. The Choir in rehearsal