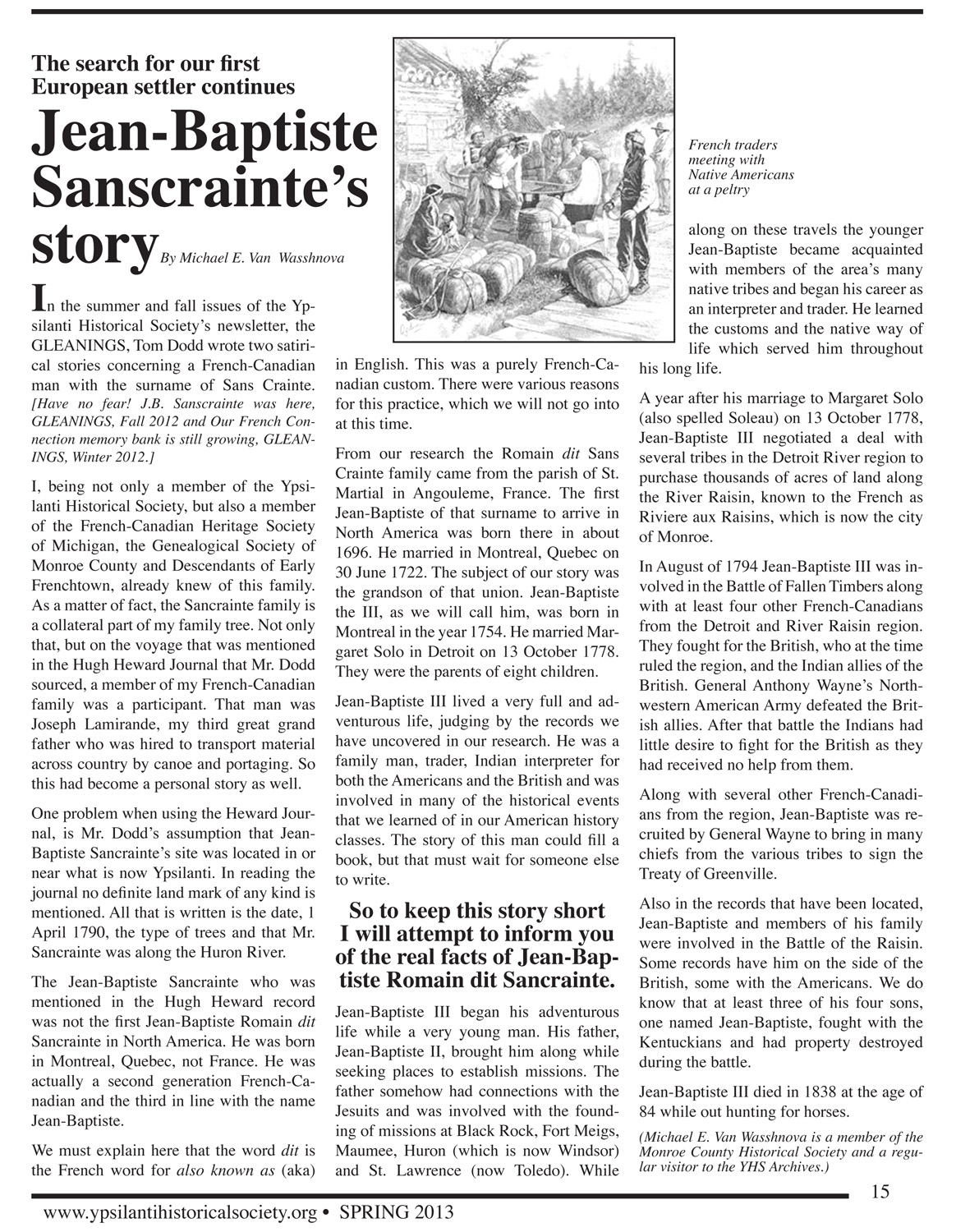 The search for our first European settler continues

In the summer and fall issues of the Ypsilanti Historical Society’s newsletter, the GLEANINGS, Tom Dodd wrote two satirical stories concerning a French-Canadian man with the surname of Sans Crainte. (Have no fear! J.B. Sanscrainte was here, GLEANINGS, Fall 2012 and Our French Connection memory bank is still growing, GLEANINGS, Winter 2012.)

I, being not only a member of the Ypsilanti Historical Society, but also a member of the French-Canadian Heritage Society of Michigan, the Genealogical Society of Monroe County and Descendants of Early Frenchtown, already knew of this family. As a matter of fact, the Sancrainte family is a collateral part of my family tree. Not only that, but on the voyage that was mentioned in the Hugh Heward Journal that Mr. Dodd sourced, a member of my French-Canadian family was a participant. That man was Joseph Lamirande, my third great grand father who was hired to transport material across country by canoe and portaging. So this had become a personal story as well.

One problem when using the Heward Journal, is Mr. Dodd’s assumption that Jean-Baptiste Sancrainte’s site was located in or near what is now Ypsilanti. In reading the journal no definite land mark of any kind is mentioned. All that is written is the date, 1 April 1790, the type of trees and that Mr. Sancrainte was along the Huron River.

The Jean-Baptiste Sancrainte who was mentioned in the Hugh Heward record was not the first Jean-Baptiste Romain dit Sancrainte in North America. He was born in Montreal, Quebec, not France. He was actually a second generation French-Canadian and the third in line with the name Jean-Baptiste.

We must explain here that the word dit is the French word for also known as (aka) in English. This was a purely French-Canadian custom. There were various reasons for this practice, which we will not go into at this time.

From our research the Romain dit Sans Crainte family came from the parish of St. Martial in Angouleme, France. The first Jean-Baptiste of that surname to arrive in North America was born there in about 1696. He married in Montreal, Quebec on 30 June 1722. The subject of our story was the grandson of that union. Jean-Baptiste the III, as we will call him, was born in Montreal in the year 1754. He married Margaret Solo in Detroit on 13 October 1778. They were the parents of eight children.

Jean-Baptiste III lived a very full and adventurous life, judging by the records we have uncovered in our research. He was a family man, trader, Indian interpreter for both the Americans and the British and was involved in many of the historical events that we learned of in our American history classes. The story of this man could fill a book, but that must wait for someone else to write.

So to keep this story short I will attempt to inform you of the real facts of Jean-Baptiste Romain dit Sancrainte.

Jean-Baptiste III began his adventurous life while a very young man. His father, Jean-Baptiste II, brought him along while seeking places to establish missions. The father somehow had connections with the Jesuits and was involved with the founding of missions at Black Rock, Fort Meigs, Maumee, Huron (which is now Windsor) and St. Lawrence (now Toledo). While along on these travels the younger Jean-Baptiste became acquainted with members of the area’s many native tribes and began his career as an interpreter and trader. He learned the customs and the native way of life which served him throughout his long life.

A year after his marriage to Margaret Solo (also spelled Soleau) on 13 October 1778, Jean-Baptiste III negotiated a deal with several tribes in the Detroit River region to purchase thousands of acres of land along the River Raisin, known to the French as Riviere aux Raisins, which is now the city of Monroe.

In August of 1794 Jean-Baptiste III was involved in the Battle of Fallen Timbers along with at least four other French-Canadians from the Detroit and River Raisin region. They fought for the British, who at the time ruled the region, and the Indian allies of the British. General Anthony Wayne’s Northwestern American Army defeated the British allies. After that battle the Indians had little desire to fight for the British as they had received no help from them.

Along with several other French-Canadians from the region, Jean-Baptiste was recruited by General Wayne to bring in many chiefs from the various tribes to sign the Treaty of Greenville.

Also in the records that have been located, Jean-Baptiste and members of his family were involved in the Battle of the Raisin. Some records have him on the side of the British, some with the Americans. We do know that at least three of his four sons, one named Jean-Baptiste, fought with the Kentuckians and had property destroyed during the battle.

Jean-Baptiste III died in 1838 at the age of 84 while out hunting for horses.

(Michael E. Van Wasshnova is a member of the Monroe County Historical Society and a regular visitor to the YHS Archives.)

1. French traders meeting with Native Americans at a peltry