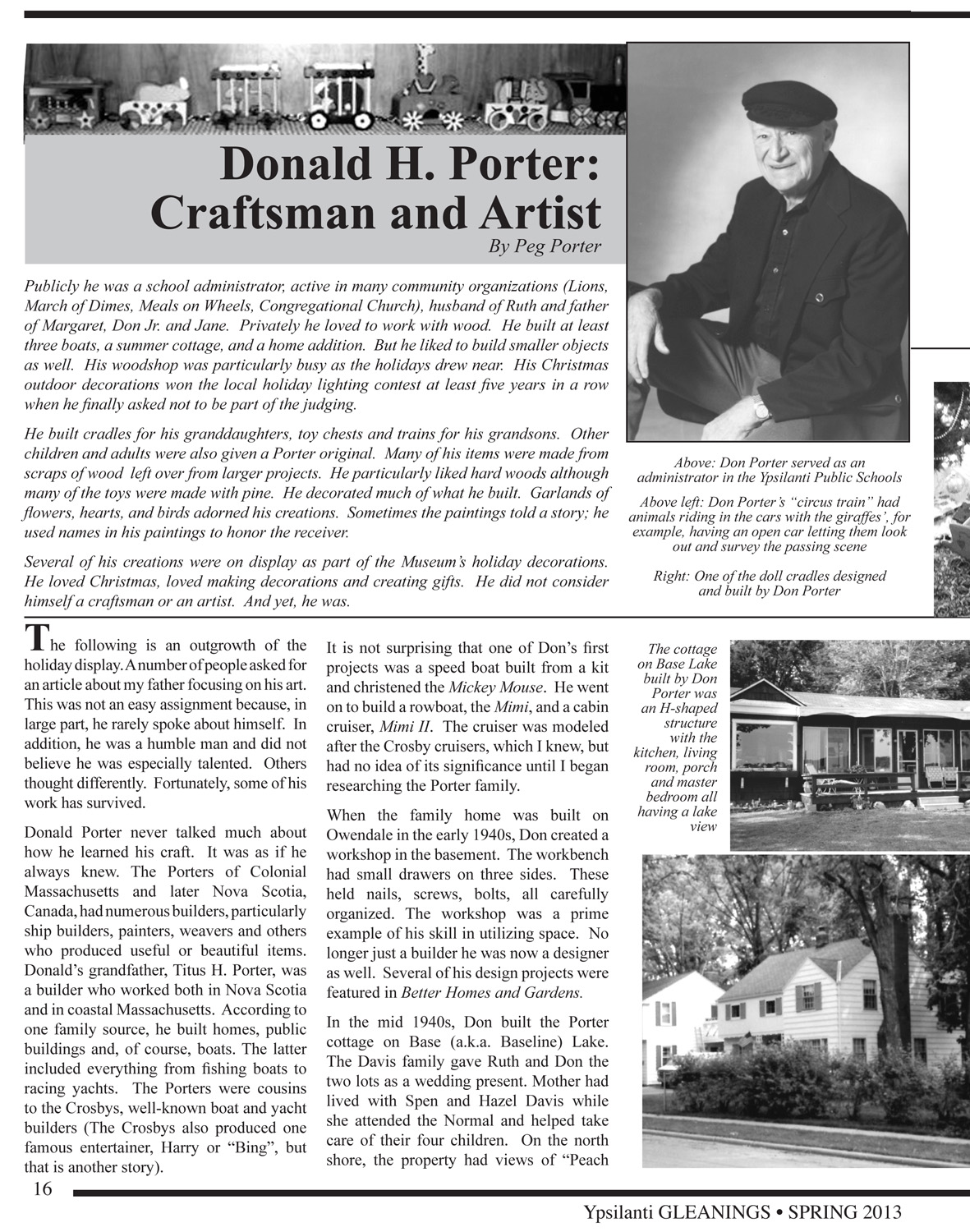 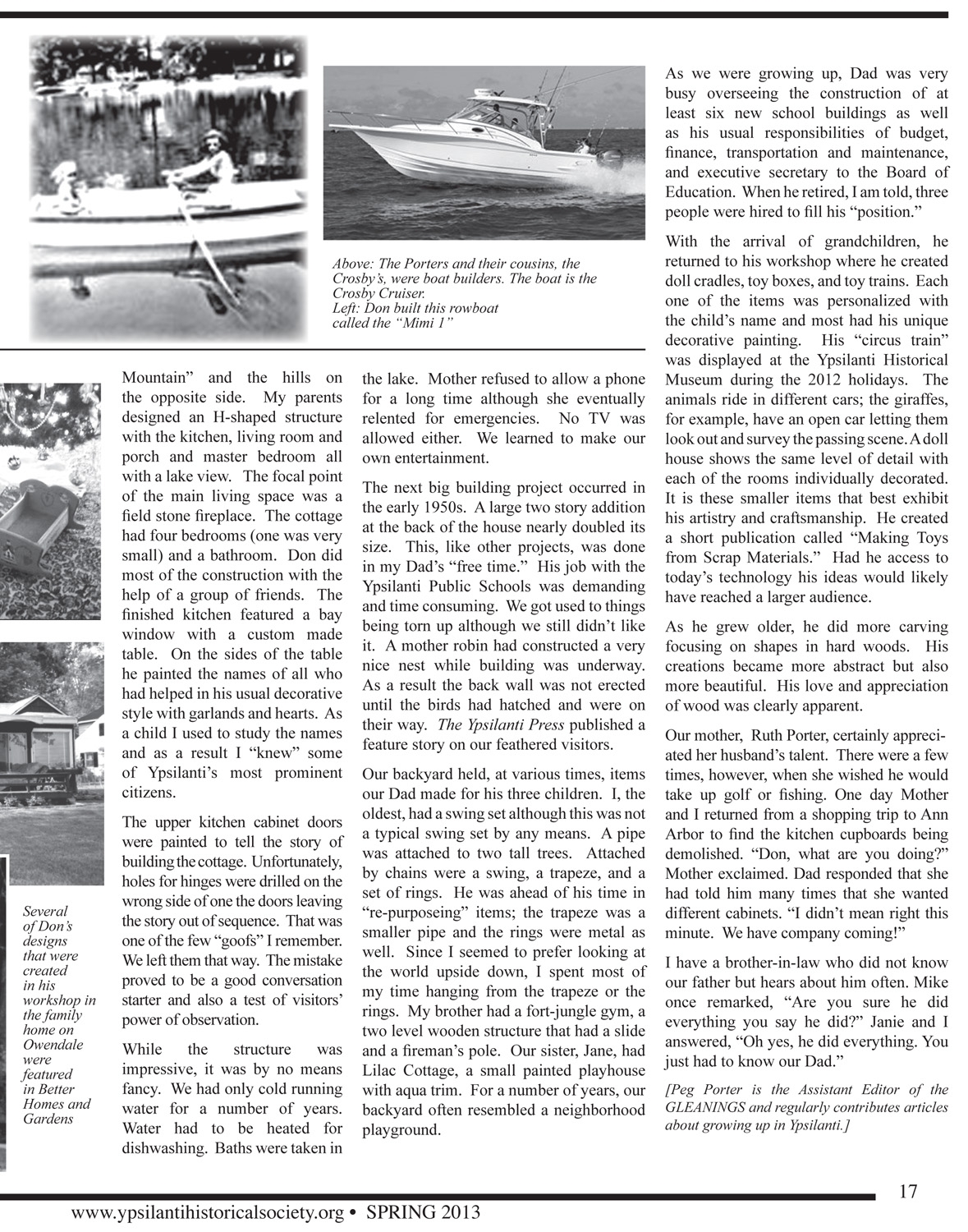 Publicly he was a school administrator, active in many community organizations (Lions, March of Dimes, Meals on Wheels, Congregational Church), husband of Ruth and father of Margaret, Don Jr. and Jane. Privately he loved to work with wood. He built at least three boats, a summer cottage, and a home addition. But he liked to build smaller objects as well. His woodshop was particularly busy as the holidays drew near. His Christmas outdoor decorations won the local holiday lighting contest at least five years in a row when he finally asked not to be part of the judging.

He built cradles for his granddaughters, toy chests and trains for his grandsons. Other children and adults were also given a Porter original. Many of his items were made from scraps of wood left over from larger projects. He particularly liked hard woods although many of the toys were made with pine. He decorated much of what he built. Garlands of flowers, hearts, and birds adorned his creations. Sometimes the paintings told a story; he used names in his paintings to honor the receiver.

Several of his creations were on display as part of the Museum’s holiday decorations. He loved Christmas, loved making decorations and creating gifts. He did not consider himself a craftsman or an artist. And yet, he was.

The following is an outgrowth of the holiday display. A number of people asked for an article about my father focusing on his art. This was not an easy assignment because, in large part, he rarely spoke about himself. In addition, he was a humble man and did not believe he was especially talented. Others thought differently. Fortunately, some of his work has survived.

Donald Porter never talked much about how he learned his craft. It was as if he always knew. The Porters of Colonial Massachusetts and later Nova Scotia, Canada, had numerous builders, particularly ship builders, painters, weavers and others who produced useful or beautiful items. Donald’s grandfather, Titus H. Porter, was a builder who worked both in Nova Scotia and in coastal Massachusetts. According to one family source, he built homes, public buildings and, of course, boats. The latter included everything from fishing boats to racing yachts. The Porters were cousins to the Crosbys, well-known boat and yacht builders (The Crosbys also produced one famous entertainer, Harry or “Bing”, but that is another story).

It is not surprising that one of Don’s first projects was a speed boat built from a kit and christened the Mickey Mouse. He went on to build a rowboat, the Mimi, and a cabin cruiser, Mimi II. The cruiser was modeled after the Crosby cruisers, which I knew, but had no idea of its significance until I began researching the Porter family.

When the family home was built on Owendale in the early 1940s, Don created a workshop in the basement. The workbench had small drawers on three sides. These held nails, screws, bolts, all carefully organized. The workshop was a prime example of his skill in utilizing space. No longer just a builder he was now a designer as well. Several of his design projects were featured in Better Homes and Gardens.

In the mid 1940s, Don built the Porter cottage on Base (a.k.a. Baseline) Lake. The Davis family gave Ruth and Don the two lots as a wedding present. Mother had lived with Spen and Hazel Davis while she attended the Normal and helped take care of their four children. On the north shore, the property had views of “Peach Mountain” and the hills on the opposite side. My parents designed an H-shaped structure with the kitchen, living room and porch and master bedroom all with a lake view. The focal point of the main living space was a field stone fireplace. The cottage had four bedrooms (one was very small) and a bathroom. Don did most of the construction with the help of a group of friends. The finished kitchen featured a bay window with a custom made table. On the sides of the table he painted the names of all who had helped in his usual decorative style with garlands and hearts. As a child I used to study the names and as a result I “knew” some of Ypsilanti’s most prominent citizens.

The upper kitchen cabinet doors were painted to tell the story of building the cottage. Unfortunately, holes for hinges were drilled on the wrong side of one the doors leaving the story out of sequence. That was one of the few “goofs” I remember. We left them that way. The mistake proved to be a good conversation starter and also a test of visitors’ power of observation.

While the structure was impressive, it was by no means fancy. We had only cold running water for a number of years. Water had to be heated for dishwashing. Baths were taken in the lake. Mother refused to allow a phone for a long time although she eventually relented for emergencies. No TV was allowed either. We learned to make our own entertainment.

The next big building project occurred in the early 1950s. A large two story addition at the back of the house nearly doubled its size. This, like other projects, was done in my Dad’s “free time.” His job with the Ypsilanti Public Schools was demanding and time consuming. We got used to things being torn up although we still didn’t like it. A mother robin had constructed a very nice nest while building was underway. As a result the back wall was not erected until the birds had hatched and were on their way. The Ypsilanti Press published a feature story on our feathered visitors.

Our backyard held, at various times, items our Dad made for his three children. I, the oldest, had a swing set although this was not a typical swing set by any means. A pipe was attached to two tall trees. Attached by chains were a swing, a trapeze, and a set of rings. He was ahead of his time in “re-purposeing” items; the trapeze was a smaller pipe and the rings were metal as well. Since I seemed to prefer looking at the world upside down, I spent most of my time hanging from the trapeze or the rings. My brother had a fort-jungle gym, a two level wooden structure that had a slide and a fireman’s pole. Our sister, Jane, had Lilac Cottage, a small painted playhouse with aqua trim. For a number of years, our backyard often resembled a neighborhood playground.

As we were growing up, Dad was very busy overseeing the construction of at least six new school buildings as well as his usual responsibilities of budget, finance, transportation and maintenance, and executive secretary to the Board of Education. When he retired, I am told, three people were hired to fill his “position.”

With the arrival of grandchildren, he returned to his workshop where he created doll cradles, toy boxes, and toy trains. Each one of the items was personalized with the child’s name and most had his unique decorative painting. His “circus train” was displayed at the Ypsilanti Historical Museum during the 2012 holidays. The animals ride in different cars; the giraffes, for example, have an open car letting them look out and survey the passing scene. A doll house shows the same level of detail with each of the rooms individually decorated. It is these smaller items that best exhibit his artistry and craftsmanship. He created a short publication called “Making Toys from Scrap Materials.” Had he access to today’s technology his ideas would likely have reached a larger audience.

As he grew older, he did more carving focusing on shapes in hard woods. His creations became more abstract but also more beautiful. His love and appreciation of wood was clearly apparent.

Our mother, Ruth Porter, certainly appreciated her husband’s talent. There were a few times, however, when she wished he would take up golf or fishing. One day Mother and I returned from a shopping trip to Ann Arbor to find the kitchen cupboards being demolished. “Don, what are you doing?” Mother exclaimed. Dad responded that she had told him many times that she wanted different cabinets. “I didn’t mean right this minute. We have company coming!”

I have a brother-in-law who did not know our father but hears about him often. Mike once remarked, “Are you sure he did everything you say he did?” Janie and I answered, “Oh yes, he did everything. You just had to know our Dad.”

[Peg Porter is the Assistant Editor of the GLEANINGS and regularly contributes articles about growing up in Ypsilanti.]

1. Don Porter served as an administrator in the Ypsilanti Public Schools

2. Don Porter’s “circus train” had animals riding in the cars with the giraffes’, for example, having an open car letting them look out and survey the passing scene

3. One of the doll cradles designed and built by Don Porter

4. The cottage on Base Lake built by Don Porter was an H-shaped structure with the kitchen, living room, porch and master bedroom all having a lake view

5. Several of Don’s designs that were created in his workshop in the family home on Owendale were featured in Better Homes and Gardens

6. The Porters and their cousins, the Crosby’s, were boat builders. The boat is the Crosby Cruiser.