Hebe fountain(s) found (but not in Ypsilanti) 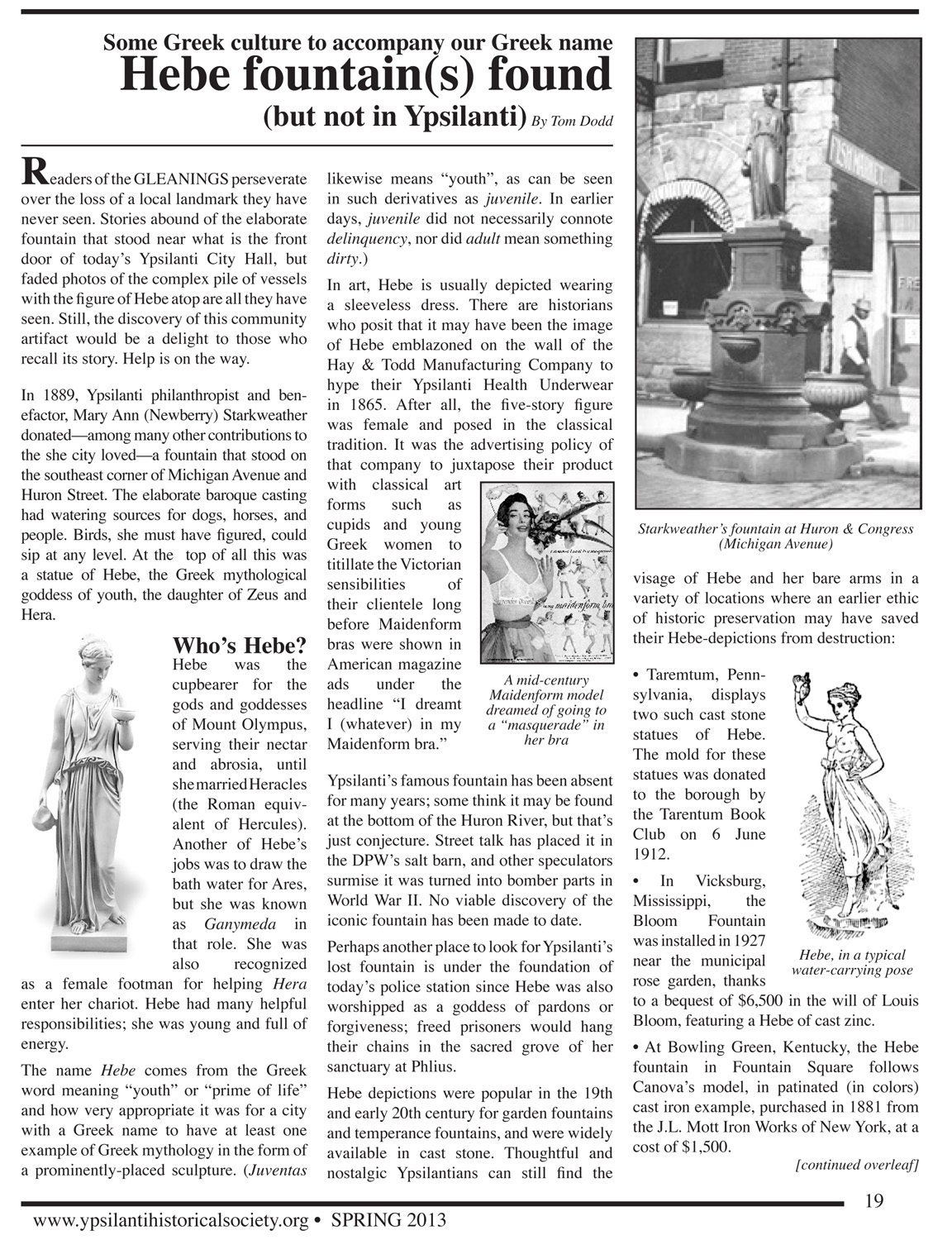 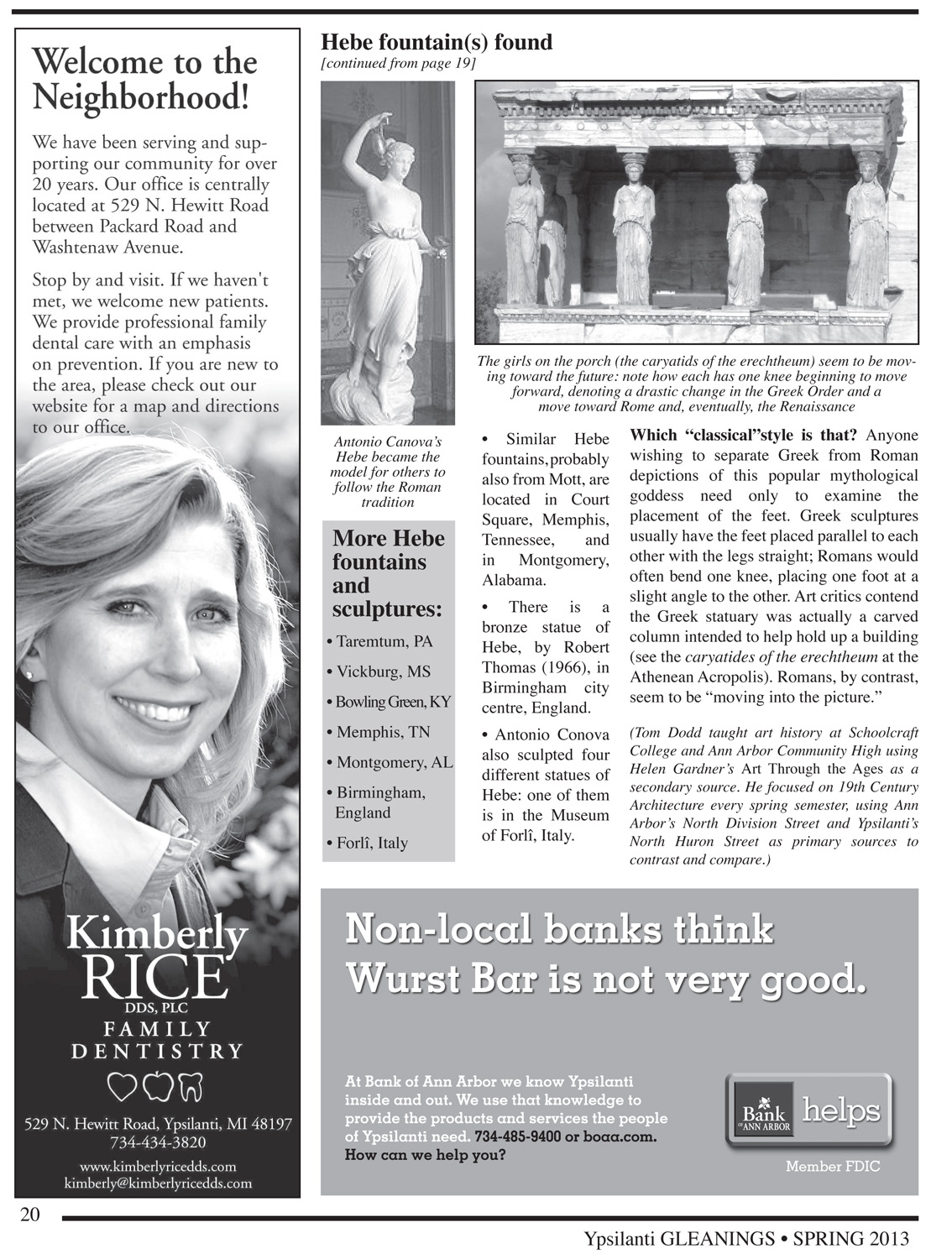 Some Greek culture to accompany our Greek name

Readers of the GLEANINGS perseverate over the loss of a local landmark they have never seen. Stories abound of the elaborate fountain that stood near what is the front door of today’s Ypsilanti City Hall, but faded photos of the complex pile of vessels with the figure of Hebe atop are all they have seen. Still, the discovery of this community artifact would be a delight to those who recall its story. Help is on the way.

In 1889, Ypsilanti philanthropist and ben-efactor, Mary Ann (Newberry) Starkweather donated––among many other contributions to the she city loved––a fountain that stood on the southeast corner of Michigan Avenue and Huron Street. The elaborate baroque casting had watering sources for dogs, horses, and people. Birds, she must have figured, could sip at any level. At the top of all this was a statue of Hebe, the Greek mythological goddess of youth, the daughter of Zeus and Hera.

Who’s Hebe?
Hebe was the cupbearer for the gods and goddesses of Mount Olympus, serving their nectar and abrosia, until she married Heracles (the Roman equiv-alent of Hercules). Another of Hebe’s jobs was to draw the bath water for Ares, but she was known as Ganymeda in that role. She was also recognized as a female footman for helping Hera enter her chariot. Hebe had many helpful responsibilities; she was young and full of energy.

The name Hebe comes from the Greek word meaning “youth” or “prime of life” and how very appropriate it was for a city with a Greek name to have at least one example of Greek mythology in the form of a prominently-placed sculpture. (Juventas likewise means “youth”, as can be seen in such derivatives as juvenile. In earlier days, juvenile did not necessarily connote delinquency, nor did adult mean something dirty.)

In art, Hebe is usually depicted wearing a sleeveless dress. There are historians who posit that it may have been the image of Hebe emblazoned on the wall of the Hay & Todd Manufacturing Company to hype their Ypsilanti Health Underwear in 1865. After all, the five-story figure was female and posed in the classical tradition. It was the advertising policy of that company to juxtapose their product with classical art forms such as cupids and young Greek women to titillate the Victorian sensibilities of their clientele long before Maidenform bras were shown in American magazine ads under the headline “I dreamt I (whatever) in my Maidenform bra.”

Ypsilanti’s famous fountain has been absent for many years; some think it may be found at the bottom of the Huron River, but that’s just conjecture. Street talk has placed it in the DPW’s salt barn, and other speculators surmise it was turned into bomber parts in World War II. No viable discovery of the iconic fountain has been made to date.

Perhaps another place to look for Ypsilanti’s lost fountain is under the foundation of today’s police station since Hebe was also worshipped as a goddess of pardons or forgiveness; freed prisoners would hang their chains in the sacred grove of her sanctuary at Phlius.

Hebe depictions were popular in the 19th and early 20th century for garden fountains and temperance fountains, and were widely available in cast stone. Thoughtful and nostalgic Ypsilantians can still find the visage of Hebe and her bare arms in a variety of locations where an earlier ethic of historic preservation may have saved their Hebe-depictions from destruction:

• Taremtum, Penn-sylvania, displays two such cast stone statues of Hebe. The mold for these statues was donated to the borough by the Tarentum Book Club on 6 June 1912.

• In Vicksburg, Mississippi, the Bloom Fountain was installed in 1927 near the municipal rose garden, thanks to a bequest of $6,500 in the will of Louis Bloom, featuring a Hebe of cast zinc.

• At Bowling Green, Kentucky, the Hebe fountain in Fountain Square follows Canova’s model, in patinated (in colors) cast iron example, purchased in 1881 from the J.L. Mott Iron Works of New York, at a cost of $1,500.

• There is a bronze statue of Hebe, by Robert Thomas (1966), in Birmingham city centre, England.

• Antonio Conova also sculpted four different statues of Hebe: one of them is in the Museum of Forlî, Italy.

Which “classical”style is that?
Anyone wishing to separate Greek from Roman depictions of this popular mythological goddess need only to examine the placement of the feet. Greek sculptures usually have the feet placed parallel to each other with the legs straight; Romans would often bend one knee, placing one foot at a slight angle to the other. Art critics contend the Greek statuary was actually a carved column intended to help hold up a building (see the caryatides of the erechtheum at the Athenean Acropolis). Romans, by contrast, seem to be “moving into the picture.”

3. A mid-century Maidenform model dreamed of going to a “masquerade” in her bra

4. Hebe, in a typical water-carrying pose

5. Antonio Canova’s Hebe became the model for others to follow the Roman tradition

6. The girls on the porch (the caryatids of the erechtheum) seem to be moving toward the future: note how each has one knee beginning to move forward, denoting a drastic change in the Greek Order and a move toward Rome and, eventually, the Renaissance