The Skeletons of Bell Street 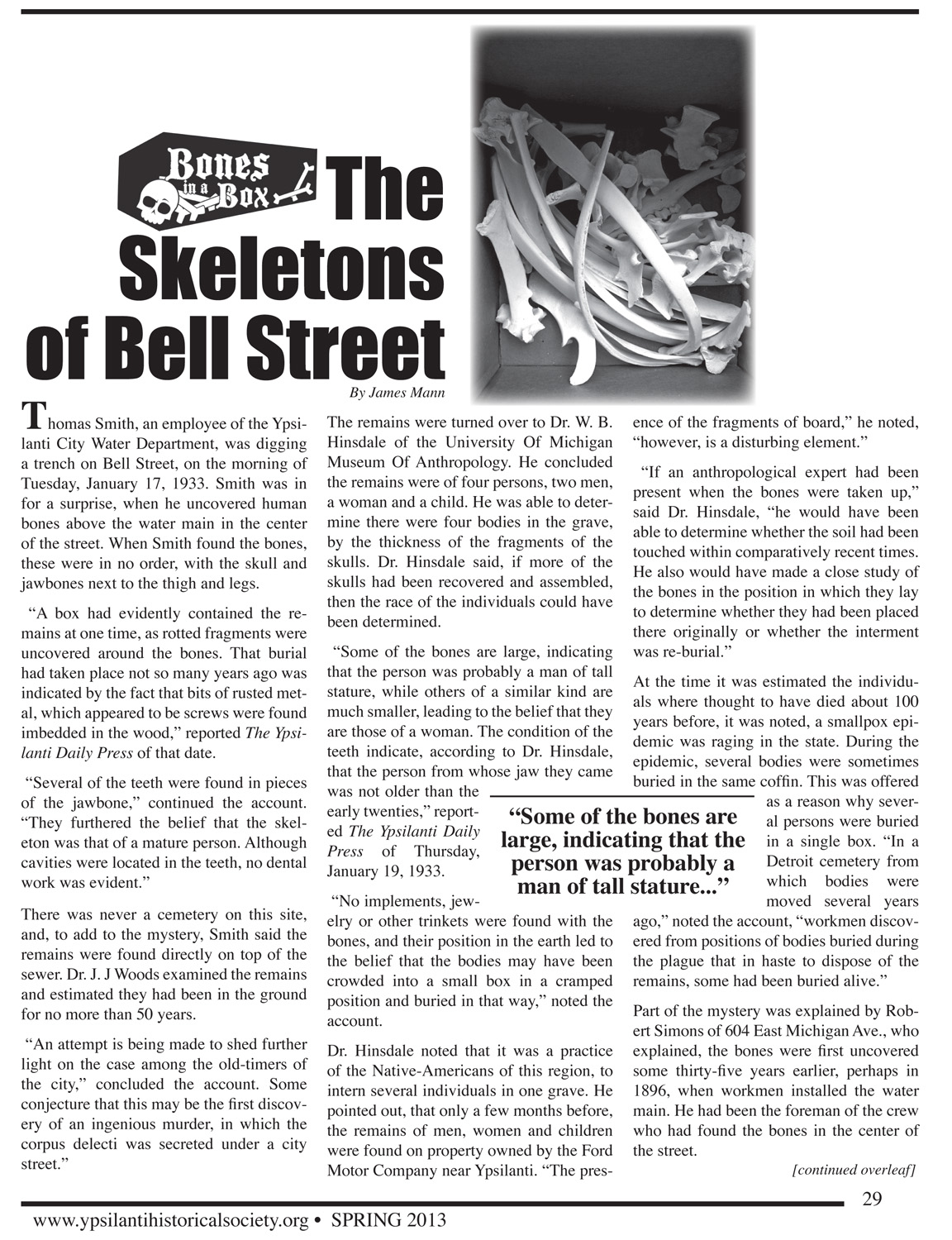 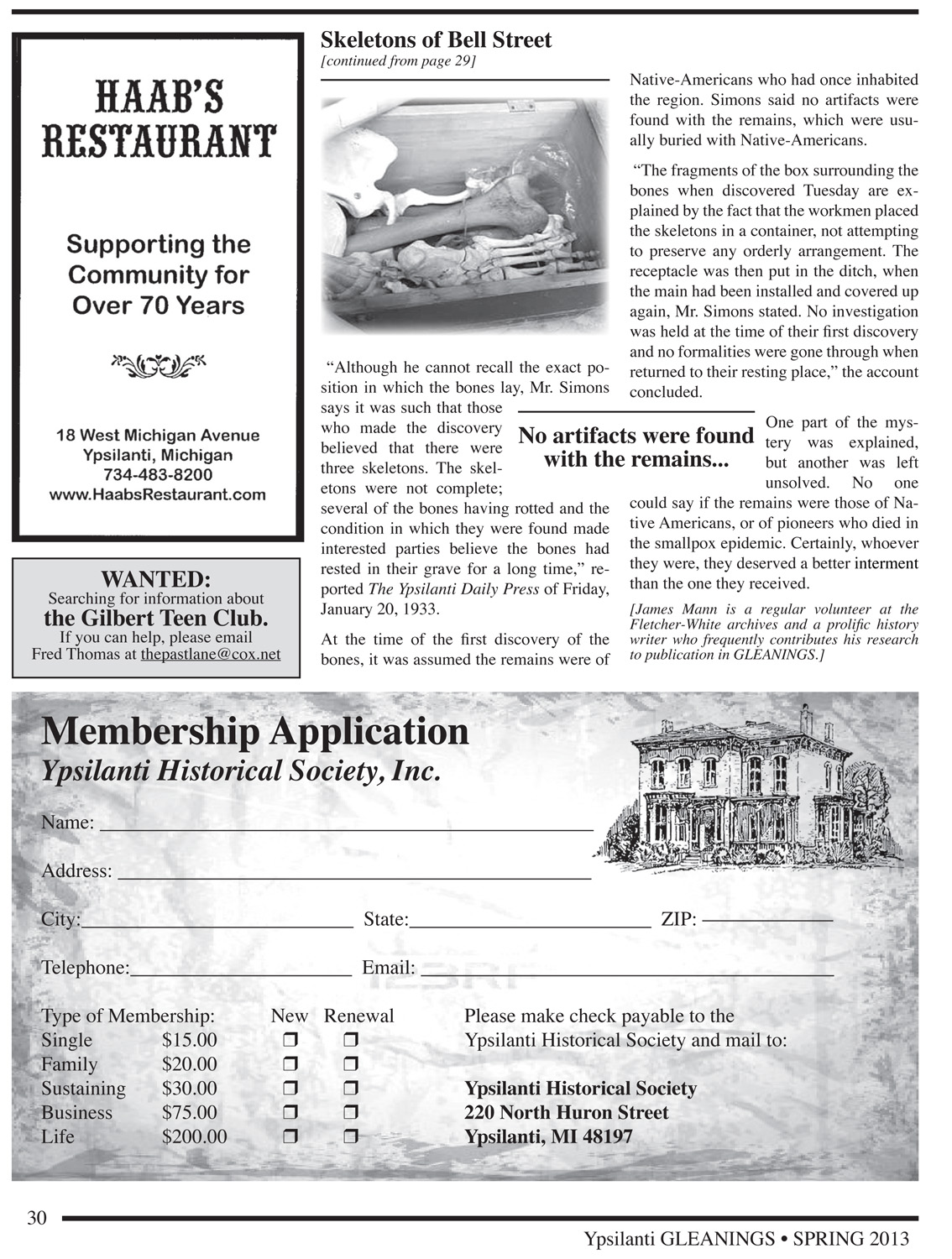 Thomas Smith, an employee of the Ypsilanti City Water Department, was digging a trench on Bell Street, on the morning of Tuesday, January 17, 1933. Smith was in for a surprise, when he uncovered human bones above the water main in the center of the street. When Smith found the bones, these were in no order, with the skull and jawbones next to the thigh and legs.

“A box had evidently contained the remains at one time, as rotted fragments were uncovered around the bones. That burial had taken place not so many years ago was indicated by the fact that bits of rusted metal, which appeared to be screws were found imbedded in the wood,” reported The Ypsilanti Daily Press of that date.

“Several of the teeth were found in pieces of the jawbone,” continued the account. “They furthered the belief that the skeleton was that of a mature person. Although cavities were located in the teeth, no dental work was evident.”

There was never a cemetery on this site, and, to add to the mystery, Smith said the remains were found directly on top of the sewer. Dr. J. J Woods examined the remains and estimated they had been in the ground for no more than 50 years.

“An attempt is being made to shed further light on the case among the old-timers of the city,” concluded the account. Some conjecture that this may be the first discovery of an ingenious murder, in which the corpus delecti was secreted under a city street.”

The remains were turned over to Dr. W. B. Hinsdale of the University Of Michigan Museum Of Anthropology. He concluded the remains were of four persons, two men, a woman and a child. He was able to determine there were four bodies in the grave, by the thickness of the fragments of the skulls. Dr. Hinsdale said, if more of the skulls had been recovered and assembled, then the race of the individuals could have been determined.

“Some of the bones are large, indicating that the person was probably a man of tall stature, while others of a similar kind are much smaller, leading to the belief that they are those of a woman. The condition of the teeth indicate, according to Dr. Hinsdale, that the person from whose jaw they came was not older than the early twenties,” reported The Ypsilanti Daily Press of Thursday, January 19, 1933.

“No implements, jewelry or other trinkets were found with the bones, and their position in the earth led to the belief that the bodies may have been crowded into a small box in a cramped position and buried in that way,” noted the account.

Dr. Hinsdale noted that it was a practice of the Native-Americans of this region, to intern several individuals in one grave. He pointed out, that only a few months before, the remains of men, women and children were found on property owned by the Ford Motor Company near Ypsilanti. “The presence of the fragments of board,” he noted, “however, is a disturbing element.”

At the time it was estimated the individuals where thought to have died about 100 years before, it was noted, a smallpox epidemic was raging in the state. During the epidemic, several bodies were sometimes buried in the same coffin. This was offered as a reason why several persons were buried in a single box. “In a Detroit cemetery from which bodies were moved several years ago,” noted the account, “workmen discovered from positions of bodies buried during the plague that in haste to dispose of the remains, some had been buried alive.”

Part of the mystery was explained by Robert Simons of 604 East Michigan Ave., who explained, the bones were first uncovered some thirty-five years earlier, perhaps in 1896, when workmen installed the water main. He had been the foreman of the crew who had found the bones in the center of the street.

“Although he cannot recall the exact position in which the bones lay, Mr. Simons says it was such that those who made the discovery believed that there were three skeletons. The skeletons were not complete; several of the bones having rotted and the condition in which they were found made interested parties believe the bones had rested in their grave for a long time,” reported The Ypsilanti Daily Press of Friday, January 20, 1933.

At the time of the first discovery of the bones, it was assumed the remains were of Native-Americans who had once inhabited the region. Simons said no artifacts were found with the remains, which were usually buried with Native-Americans.

“The fragments of the box surrounding the bones when discovered Tuesday are explained by the fact that the workmen placed the skeletons in a container, not attempting to preserve any orderly arrangement. The receptacle was then put in the ditch, when the main had been installed and covered up again, Mr. Simons stated. No investigation was held at the time of their first discovery and no formalities were gone through when returned to their resting place,” the account concluded.

One part of the mystery was explained, but another was left unsolved. No one could say if the remains were those of Native Americans, or of pioneers who died in the smallpox epidemic. Certainly, whoever they were, they deserved a better interment than the one they received.

[James Mann is a regular volunteer at the Fletcher-White archives and a prolific history writer who frequently contributes his research to publication in GLEANINGS.]