The Farm Gate Controversy of 1878 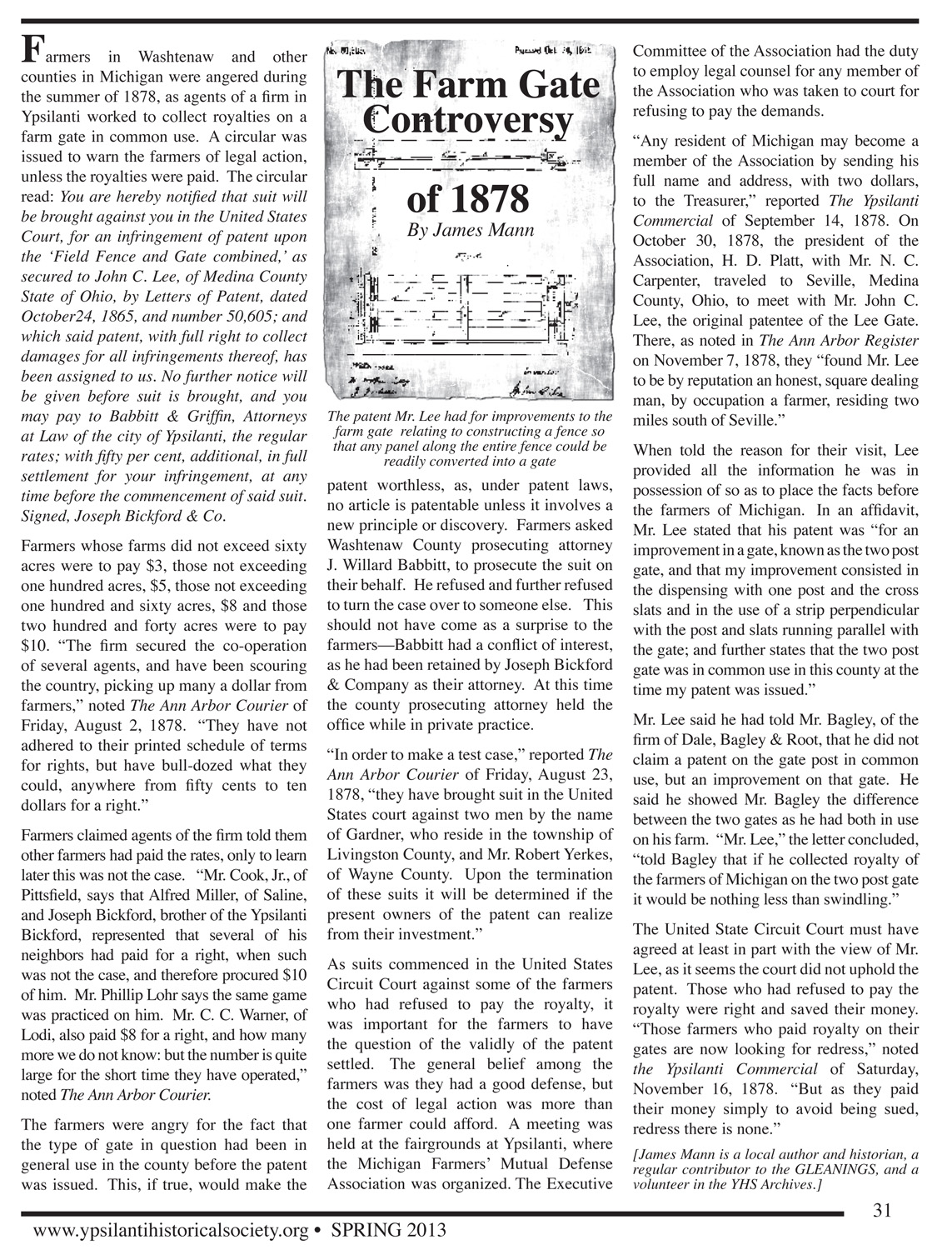 Farmers in Washtenaw and other counties in Michigan were angered during the summer of 1878, as agents of a firm in Ypsilanti worked to collect royalties on a farm gate in common use. A circular was issued to warn the farmers of legal action, unless the royalties were paid. The circular read: You are hereby notified that suit will be brought against you in the United States Court, for an infringement of patent upon the ‘Field Fence and Gate combined,’ as secured to John C. Lee, of Medina County State of Ohio, by Letters of Patent, dated October24, 1865, and number 50,605; and which said patent, with full right to collect damages for all infringements thereof, has been assigned to us. No further notice will be given before suit is brought, and you may pay to Babbitt & Griffin, Attorneys at Law of the city of Ypsilanti, the regular rates; with fifty per cent, additional, in full settlement for your infringement, at any time before the commencement of said suit. Signed, Joseph Bickford & Co.

Farmers whose farms did not exceed sixty acres were to pay $3, those not exceeding one hundred acres, $5, those not exceeding one hundred and sixty acres, $8 and those two hundred and forty acres were to pay $10. “The firm secured the co-operation of several agents, and have been scouring the country, picking up many a dollar from farmers,” noted The Ann Arbor Courier of Friday, August 2, 1878. “They have not adhered to their printed schedule of terms for rights, but have bull-dozed what they could, anywhere from fifty cents to ten dollars for a right.”

Farmers claimed agents of the firm told them other farmers had paid the rates, only to learn later this was not the case. “Mr. Cook, Jr., of Pittsfield, says that Alfred Miller, of Saline, and Joseph Bickford, brother of the Ypsilanti Bickford, represented that several of his neighbors had paid for a right, when such was not the case, and therefore procured $10 of him. Mr. Phillip Lohr says the same game was practiced on him. Mr. C. C. Warner, of Lodi, also paid $8 for a right, and how many more we do not know: but the number is quite large for the short time they have operated,” noted The Ann Arbor Courier.

The farmers were angry for the fact that the type of gate in question had been in general use in the county before the patent was issued. This, if true, would make the patent worthless, as, under patent laws, no article is patentable unless it involves a new principle or discovery. Farmers asked Washtenaw County prosecuting attorney J. Willard Babbitt, to prosecute the suit on their behalf. He refused and further refused to turn the case over to someone else. This should not have come as a surprise to the farmers––Babbitt had a conflict of interest, as he had been retained by Joseph Bickford & Company as their attorney. At this time the county prosecuting attorney held the office while in private practice.

“In order to make a test case,” reported The Ann Arbor Courier of Friday, August 23, 1878, “they have brought suit in the United States court against two men by the name of Gardner, who reside in the township of Livingston County, and Mr. Robert Yerkes, of Wayne County. Upon the termination of these suits it will be determined if the present owners of the patent can realize from their investment.”

As suits commenced in the United States Circuit Court against some of the farmers who had refused to pay the royalty, it was important for the farmers to have the question of the validly of the patent settled. The general belief among the farmers was they had a good defense, but the cost of legal action was more than one farmer could afford. A meeting was held at the fairgrounds at Ypsilanti, where the Michigan Farmers’ Mutual Defense Association was organized. The Executive Committee of the Association had the duty to employ legal counsel for any member of the Association who was taken to court for refusing to pay the demands.

“Any resident of Michigan may become a member of the Association by sending his full name and address, with two dollars, to the Treasurer,” reported The Ypsilanti Commercial of September 14, 1878. On October 30, 1878, the president of the Association, H. D. Platt, with Mr. N. C. Carpenter, traveled to Seville, Medina County, Ohio, to meet with Mr. John C. Lee, the original patentee of the Lee Gate. There, as noted in The Ann Arbor Register on November 7, 1878, they “found Mr. Lee to be by reputation an honest, square dealing man, by occupation a farmer, residing two miles south of Seville.”

When told the reason for their visit, Lee provided all the information he was in possession of so as to place the facts before the farmers of Michigan. In an affidavit, Mr. Lee stated that his patent was “for an improvement in a gate, known as the two post gate, and that my improvement consisted in the dispensing with one post and the cross slats and in the use of a strip perpendicular with the post and slats running parallel with the gate; and further states that the two post gate was in common use in this county at the time my patent was issued.”

Mr. Lee said he had told Mr. Bagley, of the firm of Dale, Bagley & Root, that he did not claim a patent on the gate post in common use, but an improvement on that gate. He said he showed Mr. Bagley the difference between the two gates as he had both in use on his farm. “Mr. Lee,” the letter concluded, “told Bagley that if he collected royalty of the farmers of Michigan on the two post gate it would be nothing less than swindling.”

The United State Circuit Court must have agreed at least in part with the view of Mr. Lee, as it seems the court did not uphold the patent. Those who had refused to pay the royalty were right and saved their money. “Those farmers who paid royalty on their gates are now looking for redress,” noted the Ypsilanti Commercial of Saturday, November 16, 1878. “But as they paid their money simply to avoid being sued, redress there is none.”

[James Mann is a local author and historian, a regular contributor to the GLEANINGS, and a volunteer in the YHS Archives.]

1. Farm gate patent “The patent Mr. Lee had for improvements to the farm gate relating to constructing a fence so that any panel along the entire fence could be readily converted into a gate”