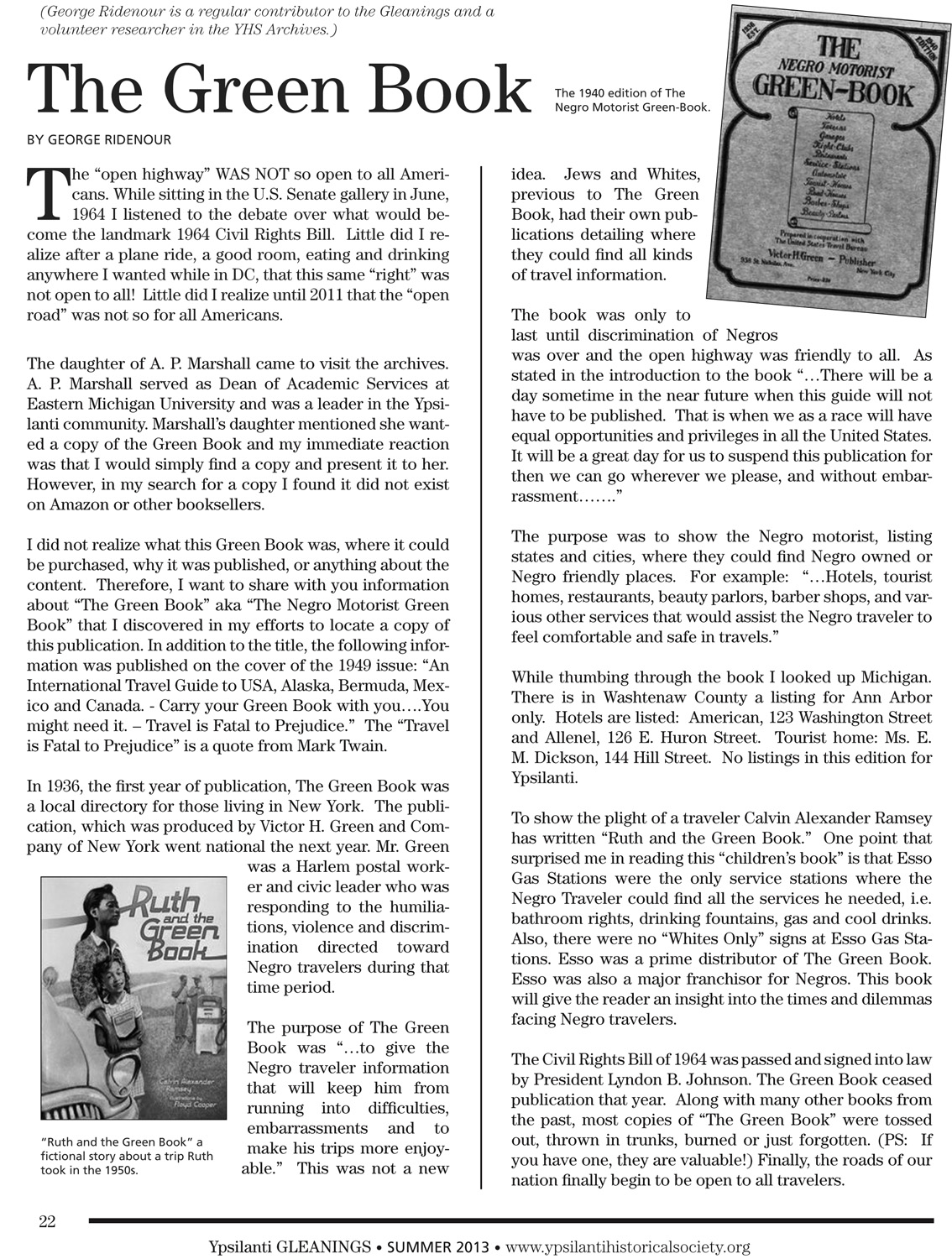 The “open highway” WAS NOT so open to all Americans. While sitting in the U.S. Senate gallery in June, 1964 I listened to the debate over what would become the landmark 1964 Civil Rights Bill. Little did I realize after a plane ride, a good room, eating and drinking anywhere I wanted while in DC, that this same “right” was not open to all! Little did I realize, until 2011, that the “open road” was not so for all Americans. The daughter of A. P. Marshall came to visit the archives. A. P. Marshall served as Dean of Academic Services at Eastern Michigan University and was a leader in the Ypsilanti community. Marshall’s daughter mentioned she wanted a copy of the Green Book and my immediate reaction was that I would simply find a copy and present it to her. However, in my search for a copy I found it did not exist on Amazon or other booksellers. I did not realize what this Green Book was, where it could be purchased, why it was published, or anything about the content. Therefore, I want to share with you information about “The Green Book” aka “The Negro Motorist Green Book” that I discovered in my efforts to locate a copy of this publication. In addition to the title, the following information was published on the cover of the 1949 issue: “An International Travel Guide to USA, Alaska, Bermuda, Mexico and Canada. - Carry your Green Book with you….You might need it. – Travel is Fatal to Prejudice.” The “Travel is Fatal to Prejudice” is a quote from Mark Twain. In 1936, the first year of publication, The Green Book was a local directory for those living in New York. The publication, which was produced by Victor H. Green and Company of New York went national the next year. Mr. Green was a Harlem postal worker and civic leader who was responding to the humiliations, violence and discrimination directed toward Negro travelers during that time period. The purpose of The Green Book was “…to give the Negro traveler information that will keep him from running into difficulties, embarrassments and to make his trips more enjoyable.” This was not a new idea. Jews and Whites, previous to The Green Book, had their own publications detailing where they could find all kinds of travel information. The book was only to last until discrimination of Negros was over and the open highway was friendly to all. As stated in the introduction to the book “…There will be a day sometime in the near future when this guide will not have to be published. That is when we as a race will have equal opportunities and privileges in all the United States. It will be a great day for us to suspend this publication for then we can go wherever we please, and without embarrassment…….” The purpose was to show the Negro motorist, listing states and cities, where they could find Negro owned or Negro friendly places. For example: “…Hotels, tourist homes, restaurants, beauty parlors, barber shops, and various other services that would assist the Negro traveler to feel comfortable and safe in travels.” While thumbing through the book I looked up Michigan. There is in Washtenaw County a listing for Ann Arbor only. Hotels are listed: American, 123 Washington Street and Allenel, 126 E. Huron Street. Tourist home: Ms. E. M. Dickson, 144 Hill Street. No listings in this edition for Ypsilanti. To show the plight of a traveler Calvin Alexander Ramsey has written “Ruth and the Green Book.” One point that surprised me in reading this “children’s book” is that Esso Gas Stations were the only service stations where the Negro Traveler could find all the services he needed, i.e. bathroom rights, drinking fountains, gas and cool drinks. Also, there were no “Whites Only” signs at Esso Gas Stations. Esso was a prime distributor of The Green Book. Esso was also a major franchisor for Negros. This book will give the reader an insight into the times and dilemmas facing Negro travelers. The Civil Rights Bill of 1964 was passed and signed into law by President Lyndon B. Johnson. The Green Book ceased publication that year. Along with many other books from the past, most copies of “The Green Book” were tossed out, thrown in trunks, burned or just forgotten. (PS: If you have one, they are valuable!) Finally, the roads of our nation finally begin to be open to all travelers. (George Ridenour is a regular contributor to the Gleanings and a volunteer researcher in the YHS Archives.)