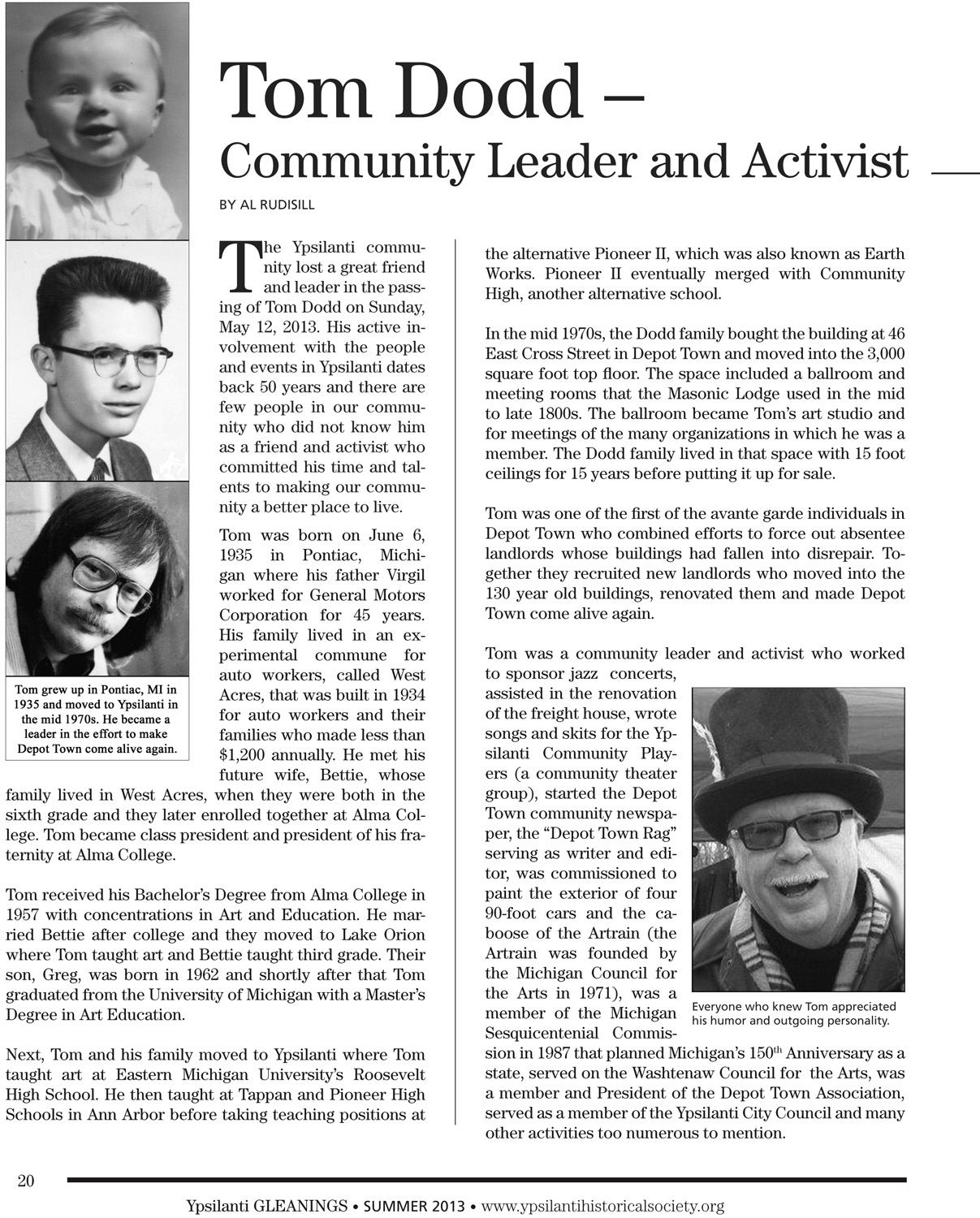 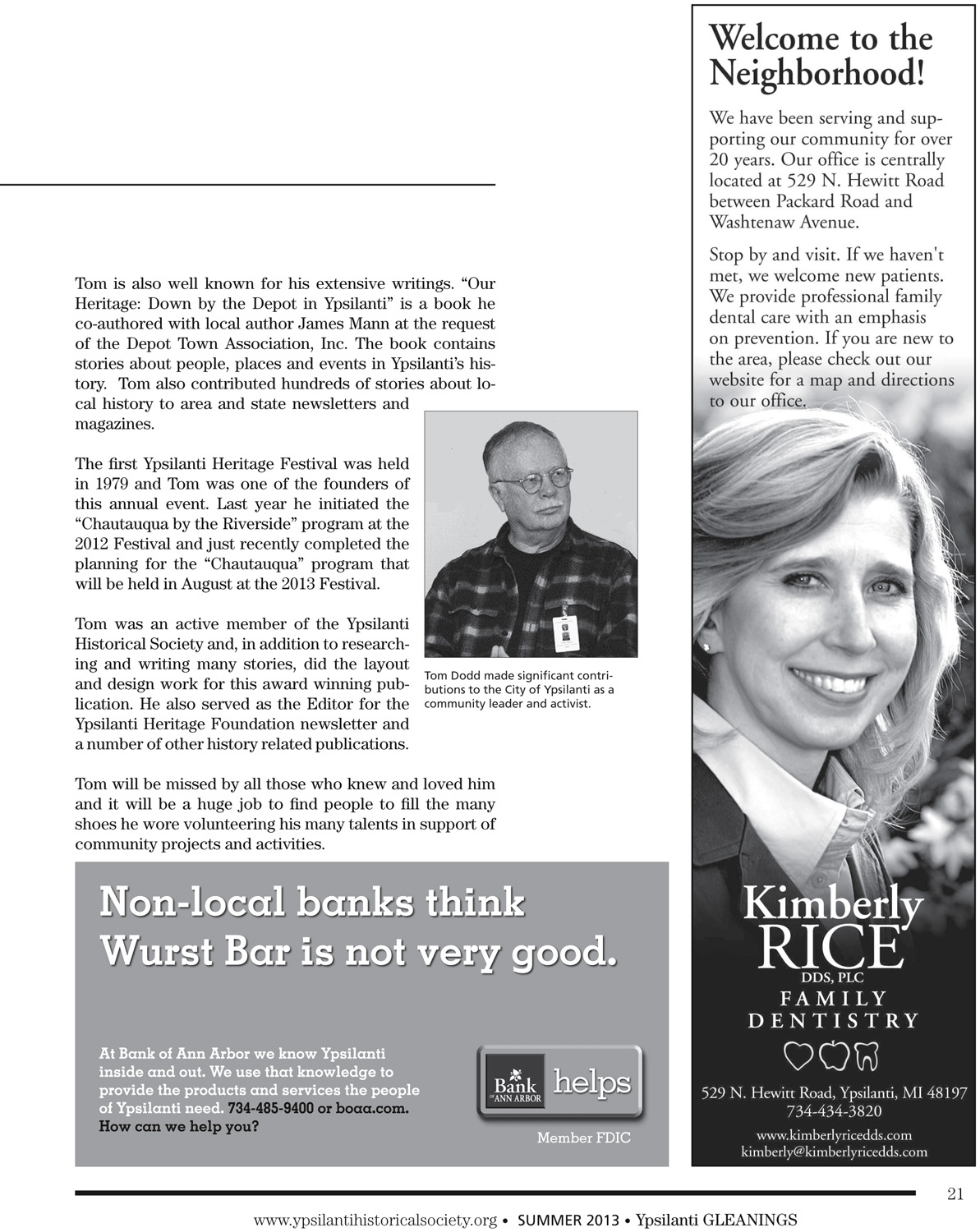 The Ypsilanti community lost a great friend and leader in the passing of Tom Dodd on Sunday, May 6, 2013. His active involvement with the people and events in Ypsilanti dates back 50 years and there are few people in our community who did not know him as a friend and activist who committed his time and talents to making our community a better place to live. Tom was born on June 6, 1935 in Pontiac, Michigan where his father Virgil worked for General Motors Corporation for 45 years. His family lived in an experimental commune for auto workers, called West Acres, that was built in 1934 for auto workers and their families who made less than $1,200 annually. He met his future wife, Bettie, whose family lived in West Acres, when they were both in the sixth grade and they later enrolled together at Alma College. Tom became class president and president of his fraternity at Alma College. Tom received his Bachelor’s Degree from Alma College in 1957 with concentrations in Art and Education. He married Bettie after college and they moved to Lake Orion where Tom taught art and Bettie taught third grade. Their son, Greg, was born in 1962 and shortly after that Tom graduated from the University of Michigan with a Master’s Degree in Art Education. Next, Tom and his family moved to Ypsilanti where Tom taught art at Eastern Michigan University’s Roosevelt High School. He then taught at Tappan and Pioneer High Schools in Ann Arbor before taking teaching positions at the alternative Pioneer II, which was also known as Earth Works. Pioneer II eventually merged with Community High, another alternative school. In the mid 1970s, the Dodd family bought the building at 46 East Cross Street in Depot Town and moved into the 3,000 square foot top floor. The space included a ballroom and meeting rooms that the Masonic Lodge used in the mid to late 1800s. The ballroom became Tom’s art studio and for meetings of the many organizations in which he was a member. The Dodd family lived in that space with 15 foot ceilings for 15 years before putting it up for sale. Tom was one of the first of the avante garde individuals in Depot Town who combined efforts to force out absentee landlords whose buildings had fallen into disrepair. Together they recruited new landlords who moved into the 130 year old buildings, renovated them and made Depot Town come alive again. Tom was a community leader and activist who worked to sponsor jazz concerts, assisted in the renovation of the freight house, wrote songs and skits for the Ypsilanti Community Players (a community theater group), started the Depot Town community newspaper, the “Depot Town Rag” serving as writer and editor, was commissioned to paint the exterior of four 90-foot cars and the caboose of the Artrain (the Artrain was founded by the Michigan Council for the Arts in 1971), was a member of the Michigan Sesquicentenial Commission in 1987 that planned Michigan’s 150th Anniversary as a state, served on the Washtenaw Council for the Arts, was a member and President of the Depot Town Association, served as a member of the Ypsilanti City Council and many other activities too numerous to mention. Tom is also well known for his extensive writings. “Our Heritage: Down by the Depot in Ypsilanti” is a book he co-authored with local author James Mann at the request of the Depot Town Association, Inc. The book contains stories about people, places and events in Ypsilanti’s history. Tom also contributed hundreds of stories about local history to area and state newsletters and magazines. The first Ypsilanti Heritage Festival was held in 1979 and Tom was one of the founders of this annual event. Last year he initiated the “Chautauqua by the Riverside” program at the 2012 Festival and just recently completed the planning for the “Chautauqua” program that will be held in August at the 2013 Festival. Tom was an active member of the Ypsilanti Historical Society and, in addition to researching and writing many stories, did the layout and design work for this award winning publication. He also served as the Editor for the Ypsilanti Heritage Foundation newsletter and a number of other history related publications. Tom will be missed by all those who knew and loved him and it will be a huge job to find people to fill the many shoes he wore volunteering his many talents in support of community projects and activities.

Photo Captions: 1. Tom Dodd made significant contributions to the City of Ypsilanti as a community leader and activist.

2. Everyone who knew Tom appreciated his humor and outgoing personality.

3. Tom grew up in Pontiac, MI in 1935 and moved to Ypsilanti in the mid 1970s. He became a leader in the effort to make Depot Town come alive again.