The Search for Anastacio Cardenas 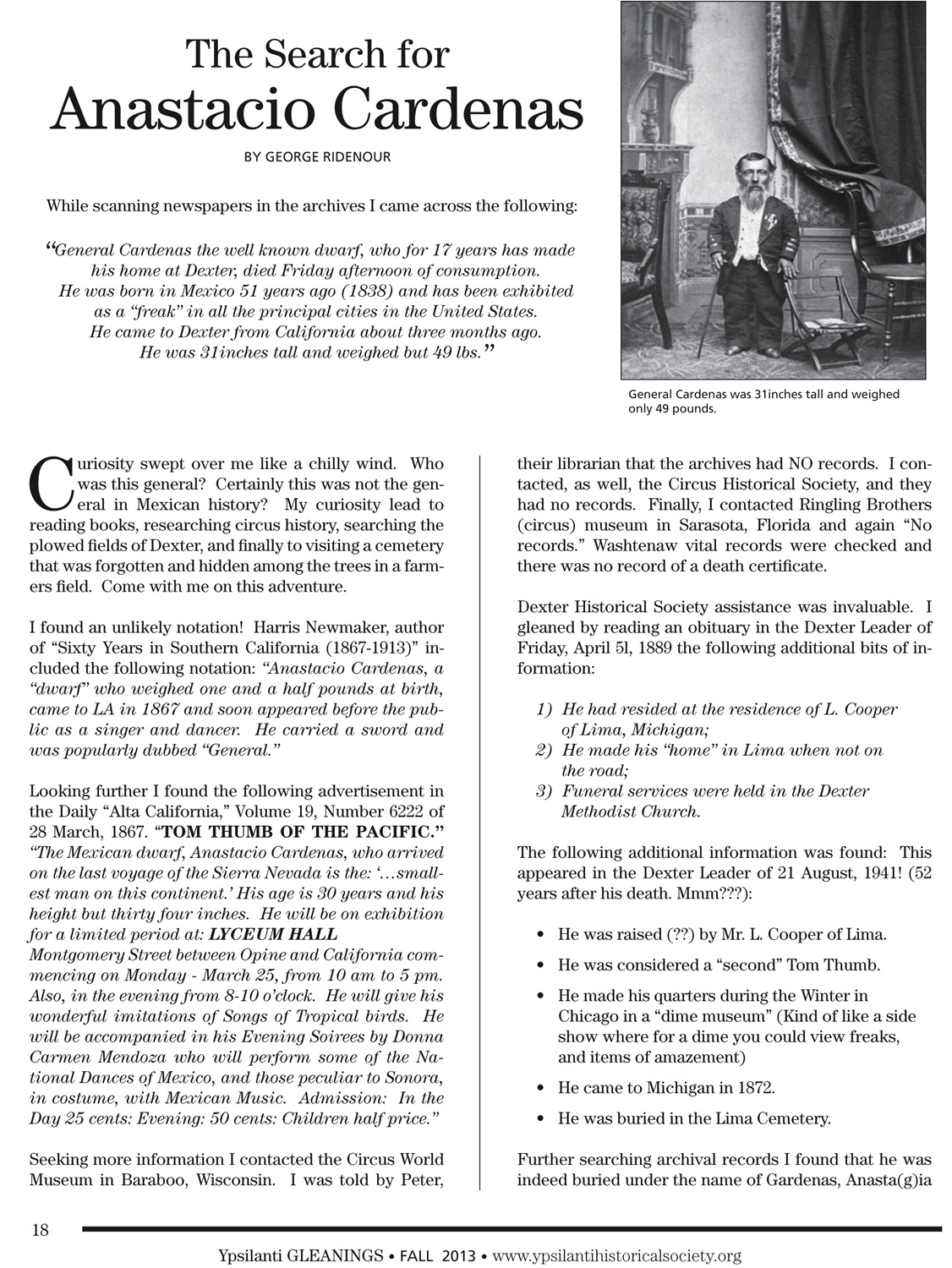 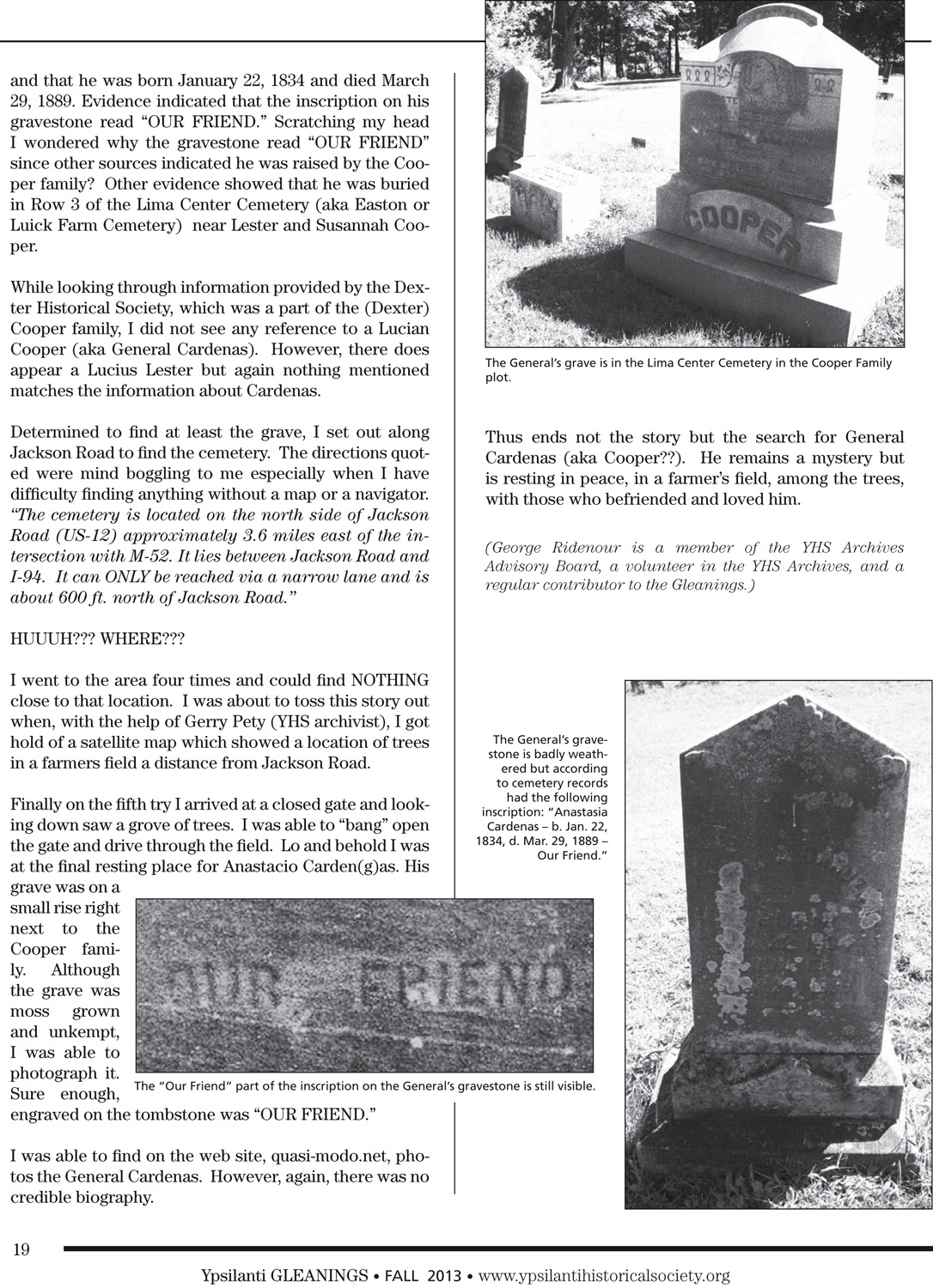 While scanning newspapers in the archives I came across the following: “General Cardenas the well known dwarf, who for 17 years has made his home at Dexter, died Friday afternoon of consumption. He was born in Mexico 51 years ago (1838) and has been exhibited as a “freak” in all the principal cities in the United States. He came to Dexter from California about three months ago. He was 31 inches tall and weighed but 49 lbs.” Curiosity swept over me like a chilly wind. Who was this general? Certainly this was not the general in Mexican history? My curiosity lead to reading books, researching circus history, searching the plowed fields of Dexter, and finally to visiting a cemetery that was forgotten and hidden among the trees in a farmers field. Come with me on this adventure. I found an unlikely notation! Harris Newmaker, author of “Sixty Years in Southern California (1867-1913)” included the following notation: “Anastacio Cardenas, a “dwarf” who weighed one and a half pounds at birth, came to LA in 1867 and soon appeared before the public as a singer and dancer. He carried a sword and was popularly dubbed “General.” Looking further I found the following advertisement in the Daily “Alta California,” Volume 19, Number 6222 of 28 March, 1867. “TOM THUMB OF THE PACIFIC.” “The Mexican dwarf, Anastacio Cardenas, who arrived on the last voyage of the Sierra Nevada is the: ‘…smallest man on this continent.’ His age is 30 years and his height but thirty four inches. He will be on exhibition for a limited period at: LYCEUM HALL Montgomery Street between Opine and California commencing on Monday - March 25, from 10 am to 5 pm. Also, in the evening from 8-10 o’clock. He will give his wonderful imitations of Songs of Tropical birds. He will be accompanied in his Evening Soirees by Donna Carmen Mendoza who will perform some of the National Dances of Mexico, and those peculiar to Sonora, in costume, with Mexican Music. Admission: In the Day 25 cents: Evening: 50 cents: Children half price.” Seeking more information I contacted the Circus World Museum in Baraboo, Wisconsin. I was told by Peter, their librarian that the archives had NO records. I contacted, as well, the Circus Historical Society, and they had no records. Finally, I contacted Ringling Brothers (circus) museum in Sarasota, Florida and again “No records.” Washtenaw vital records were checked and there was no record of a death certificate. Dexter Historical Society assistance was invaluable. I gleaned by reading an obituary in the Dexter Leader of Friday, April 5l, 1889 the following additional bits of information: 1) He had resided at the residence of L. Cooper of Lima, Michigan; 2) He made his “home” in Lima when not on the road; 3) Funeral services were held in the Dexter Methodist Church. The following additional information was found: This appeared in the Dexter Leader of 21 August, 1941! (52 years after his death. Mmm???): • He was raised (??) by Mr. L. Cooper of Lima. • He was considered a “second” Tom Thumb. • He made his quarters during the Winter in Chicago in a “dime museum” (Kind of like a side show where for a dime you could view freaks, and items of amazement) • He came to Michigan in 1872. • He was buried in the Lima Cemetery. Further searching archival records I found that he was indeed buried under the name of Gardenas, Anasta(g)ia and that he was born January 22, 1834 and died March 29, 1889. Evidence indicated that the inscription on his gravestone read “OUR FRIEND.” Scratching my head I wondered why the gravestone read “OUR FRIEND” since other sources indicated he was raised by the Cooper family? Other evidence showed that he was buried in Row 3 of the Lima Center Cemetery (aka Easton or Luick Farm Cemetery) near Lester and Susannah Cooper. While looking through information provided by the Dexter Historical Society, which was a part of the (Dexter) Cooper family, I did not see any reference to a Lucian Cooper (aka General Cardenas). However, there does appear a Lucius Lester but again nothing mentioned matches the information about Cardenas. Determined to find at least the grave, I set out along Jackson Road to find the cemetery. The directions quoted were mind boggling to me especially when I have difficulty finding anything without a map or a navigator. “The cemetery is located on the north side of Jackson Road (US-12) approximately 3.6 miles east of the intersection with M-52. It lies between Jackson Road and I-94. It can ONLY be reached via a narrow lane and is about 600 ft. north of Jackson Road.” HUUUH??? WHERE??? I went to the area four times and could find NOTHING close to that location. I was about to toss this story out when, with the help of Gerry Pety (YHS archivist), I got hold of a satellite map which showed a location of trees in a farmers field a distance from Jackson Road. Finally on the fifth try I arrived at a closed gate and, looking down, saw a grove of trees. I was able to “bang” open the gate and drive through the field. Lo and behold I was at the final resting place for Anastacio Carden(g)as. His grave was on a small rise right next to the Cooper family. Although the grave was moss grown and unkempt, I was able to photograph it. Sure enough, engraved on the tombstone was “OUR FRIEND.” I was able to find on the web site, quasi-modo.net, photos the General Cardenas. However, again, there was no credible biography. Thus ends not the story but the search for General Cardenas (aka Cooper??). He remains a mystery but is resting in peace, in a farmer’s field, among the trees, with those who befriended and loved him. (George Ridenour is a member of the YHS Archives Advisory Board, a volunteer in the YHS Archives, and a regular contributor to the Gleanings.)

2. The General’s grave is in the Lima Center Cemetery in the Cooper Family plot.

4. The “Our Friend” part of the inscription on the General’s gravestone is still visible.