Case of the Lost Handbag 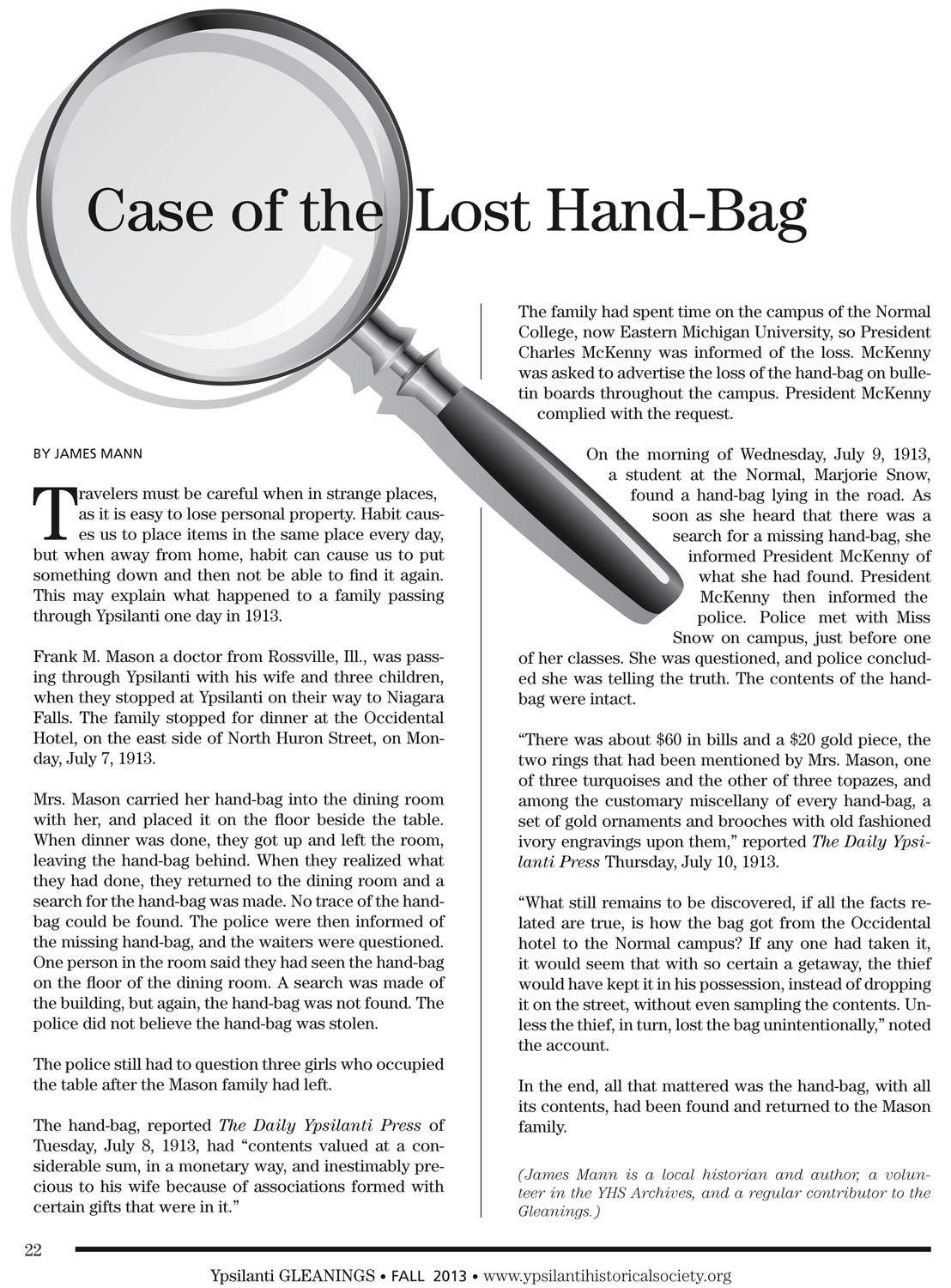 Travelers must be careful when in strange places, as it is easy to lose personal property. Habit causes us to place items in the same place every day, but when away from home, habit can cause us to put something down and then not be able to find it again. This may explain what happened to a family passing through Ypsilanti one day in 1913.

Frank M. Mason a doctor from Rossville, Ill., was passing through Ypsilanti with his wife and three children, when they stopped at Ypsilanti on their way to Niagara Falls. The family stopped for dinner at the Occidental Hotel, on the east side of North Huron Street, on Monday, July 7, 1913.

The police still had to question three girls who occupied the table after the Mason family had left.

The handbag, reported The Daily Ypsilanti Press of Tuesday, July 8, 1913, had “contents valued at a considerable sum, in a monetary way, and inestimably precious to his wife because of associations formed with certain gifts that were in it.”

The family had spent time on the campus of the Normal College, now Eastern Michigan University, so President Charles McKenny was informed of the loss. McKenny was asked to advertise the loss of the handbag on bulletin boards throughout the campus. President McKenny complied with the request.

On the morning of Wednesday, July 9, 1913, a student at the Normal, Marjorie Snow, found a handbag lying in the road. As soon as she heard that there was a search for a missing handbag, she informed President McKenny of what she had found. President McKenny then informed the police. Police met with Miss Snow on campus, just before one of her classes. She was questioned, and police concluded she was telling the truth. The contents of the handbag were intact.

“There was about $60 in bills and a $20 gold piece, the two rings that had been mentioned by Mrs. Mason, one of three turquoises and the other of three topazes, and among the customary miscellany of every hand-bag, a set of gold ornaments and brooches with old fashioned ivory engravings upon them,” reported The Daily Ypsilanti Press Thursday, July 10, 1913.

“What still remains to be discovered, if all the facts related are true, is how the bag got from the Occidental hotel to the Normal campus? If any one had taken it, it would seem that with so certain a getaway, the thief would have kept it in his possession, instead of dropping it on the street, without even sampling the contents. Unless the thief, in turn, lost the bag unintentionally,” noted the account.

In the end, all that mattered was the handbag, with all its contents, had been found and returned to the Mason family.