An Artist at the Bomber Plant 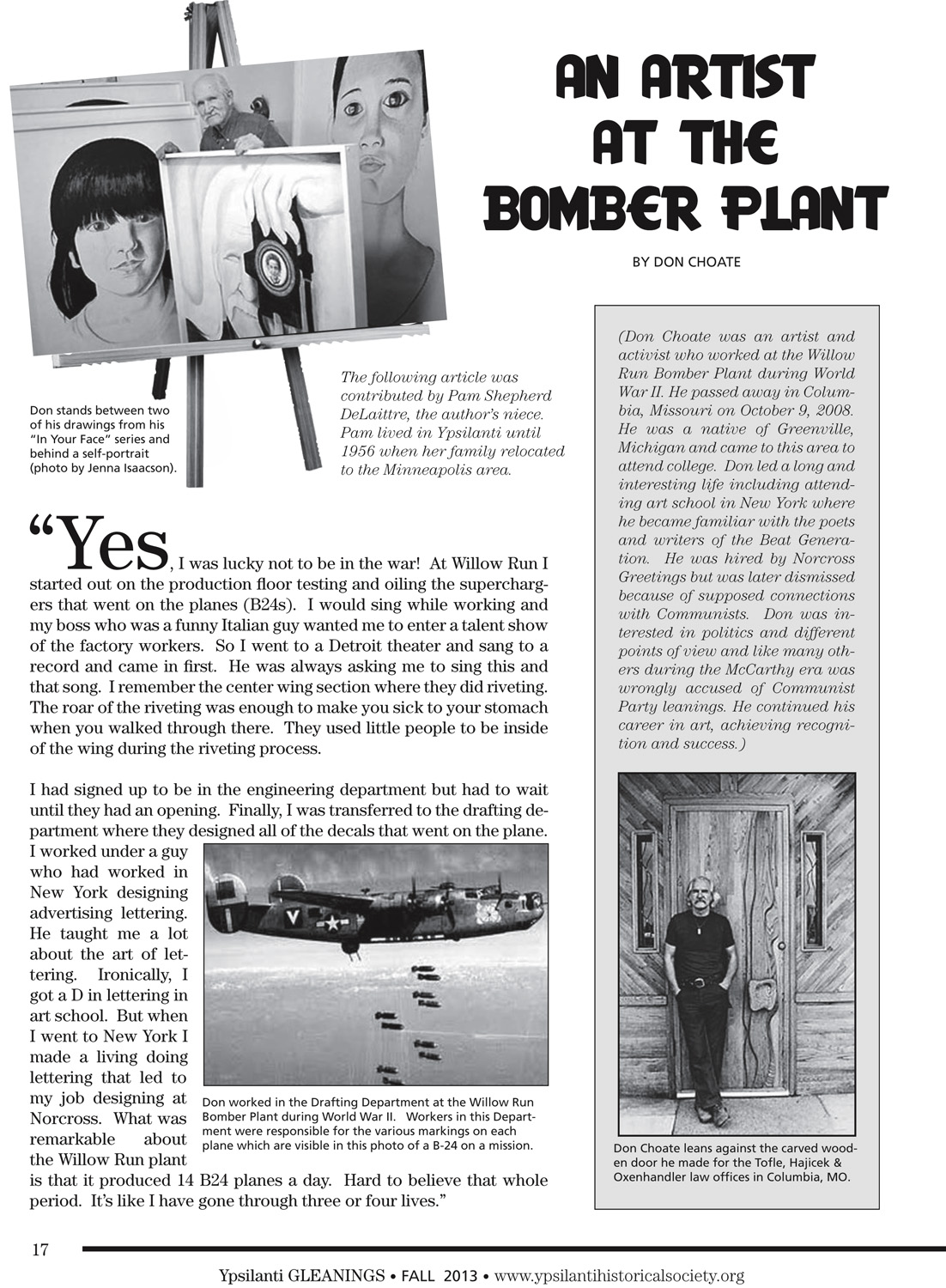 The following article was contributed by Pam Shepherd DeLaittre, the author’s niece. Pam lived in Ypsilanti until 1956 when her family relocated to the Minneapolis area. “Yes, I was lucky not to be in the war! At Willow Run I started out on the production floor testing and oiling the superchargers that went on the planes (B24s). I would sing while working and my boss who was a funny Italian guy wanted me to enter a talent show of the factory workers. So I went to a Detroit theater and sang to a record and came in first. He was always asking me to sing this and that song. I remember the center wing section where they did riveting. The roar of the riveting was enough to make you sick to your stomach when you walked through there. They used little people to be inside of the wing during the riveting process. I had signed up to be in the engineering department but had to wait until they had an opening. Finally, I was transferred to the drafting department where they designed all of the decals that went on the plane. I worked under a guy who had worked in New York designing advertising lettering. He taught me a lot about the art of lettering. Ironically, I got a D in lettering in art school. But when I went to New York I made a living doing lettering that led to my job designing at Norcross. What was remarkable about the Willow Run plant is that it produced 14 B24 planes a day. Hard to believe that whole period. It’s like I have gone through three or four lives.” (Don Choate was an artist and activist who worked at the Willow Run Bomber Plant during World War II. He passed away in Columbia, Missouri on October 9, 2008. He was a native of Greenville, Michigan and came to this area to attend college. Don led a long and interesting life including attending art school in New York where he became familiar with the poets and writers of the Beat Generation. He was hired by Norcross Greetings but was later dismissed because of supposed connections with Communists. Don was interested in politics and different points of view and like many others during the McCarthy era was wrongly accused of Communist Party leanings. He continued his career in art, achieving recognition and success.)

Photo Captions: 1. Don worked in the Drafting Department at the Willow Run Bomber Plant during World War II. Workers in this Department were responsible for the various markings on each plane which are visible in this photo of a B-24 on a mission.

2. Don Choate leans against the carved wooden door he made for the Tofle, Hajicek & Oxenhandler law offices in Columbia, MO.

3. Don stands between two of his drawings from his “In Your Face” series and behind a self-portrait (photo by Jenna Isaacson).