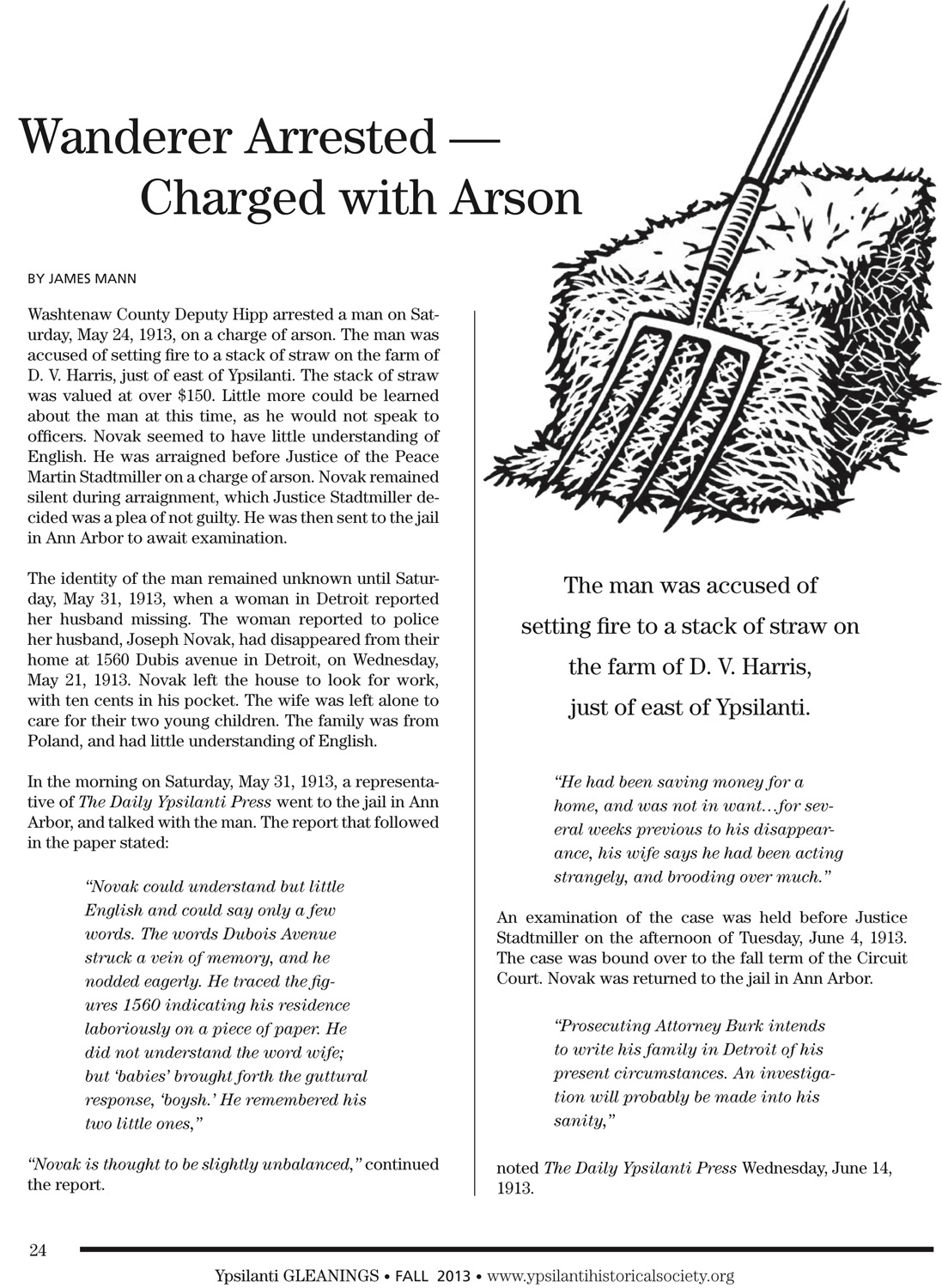 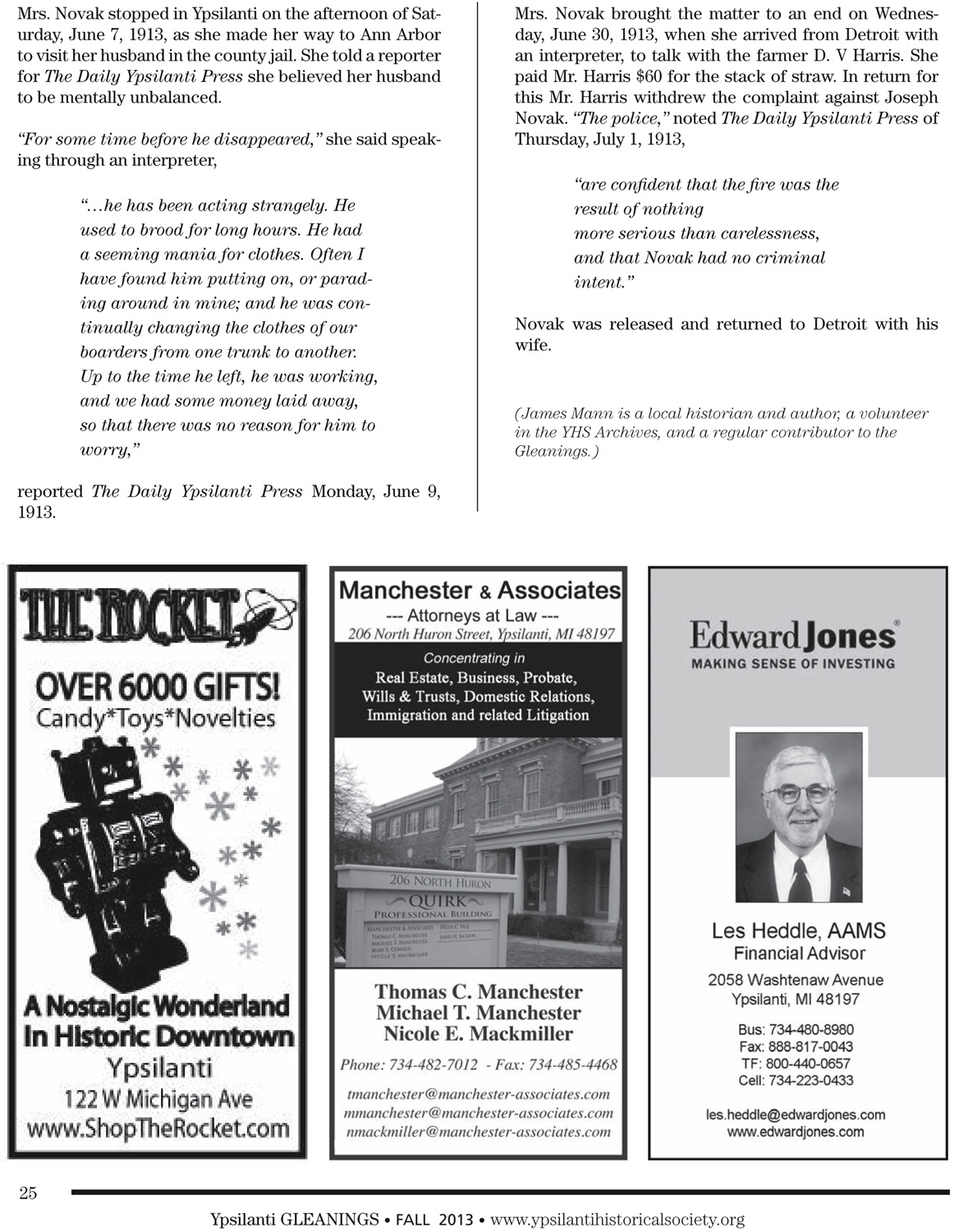 Washtenaw County Deputy Hipp arrested a man on Saturday, May 24, 1913, on a charge of arson. The man was accused of setting fire to a stack of straw on the farm of D. V. Harris, just east of Ypsilanti. The stack of straw was valued at over $150. Little more could be learned about the man at this time, as he would not speak to officers. Novak seemed to have little understanding of English. He was arraigned before Justice of the Peace Martin Stadtmiller on a charge of arson. Novak remained silent during arraignment, which Justice Stadtmiller decided was a plea of not guilty. He was then sent to the jail in Ann Arbor to await examination.

The identity of the man remained unknown until Saturday, May 31, 1913, when a woman in Detroit reported her husband missing. The woman reported to police her husband, Joseph Novak, had disappeared from their home at 1560 Dubois avenue in Detroit, on Wednesday, May 21, 1913. Novak left the house to look for work, with ten cents in his pocket. The wife was left alone to care for their two young children. The family was from Poland, and had little understanding of English.

In the morning on Saturday, May 31, 1913, a representative of The Daily Ypsilanti Press went to the jail in Ann Arbor, and talked with the man. The report that followed in the paper stated:

“Novak could understand but little English and could say only a few words. The words Dubois Avenue struck a vein of memory, and he nodded eagerly. He traced the figures 1560 indicating his residence laboriously on a piece of paper. He did not understand the word wife; but ‘babies’ brought forth the guttural response, ‘boysh.’ He remembered his two little ones,”

“Novak is thought to be slightly unbalanced,” continued the report. “He had been saving money for a home, and was not in want…for several weeks previous to his disappearance, his wife says he had been acting strangely, and brooding over much.”

An examination of the case was held before Justice Stadtmiller on the afternoon of Tuesday, June 4, 1913. The case was bound over to the fall term of the Circuit Court. Novak was returned to the jail in Ann Arbor.

“Prosecuting Attorney Burk intends to write his family in Detroit of his present circumstances. An investigation will probably be made into his sanity,” noted The Daily Ypsilanti Press Wednesday, June 14, 1913.

Mrs. Novak stopped in Ypsilanti on the afternoon of Saturday, June 7, 1913, as she made her way to Ann Arbor to visit her husband in the county jail. She told a reporter for The Daily Ypsilanti Press she believed her husband to be mentally unbalanced.

“For some time before he disappeared,” she said speaking through an interpreter, “…he has been acting strangely. He used to brood for long hours. He had a seeming mania for clothes. Often I have found him putting on, or parading around in mine; and he was continually changing the clothes of our boarders from one trunk to another. Up to the time he left, he was working, and we had some money laid away, so that there was no reason for him to worry,” reported The Daily Ypsilanti Press Monday, June 9, 1913.

Mrs. Novak brought the matter to an end on Wednesday, June 30, 1913, when she arrived from Detroit with an interpreter, to talk with the farmer D. V Harris. She paid Mr. Harris $60 for the stack of straw. In return for this Mr. Harris withdrew the complaint against Joseph Novak. “The police,” noted The Daily Ypsilanti Press of Thursday, July 1, 1913, “are confident that the fire was the result of nothing more serious than carelessness, and that Novak had no criminal intent.” Novak was released and returned to Detroit with his wife.