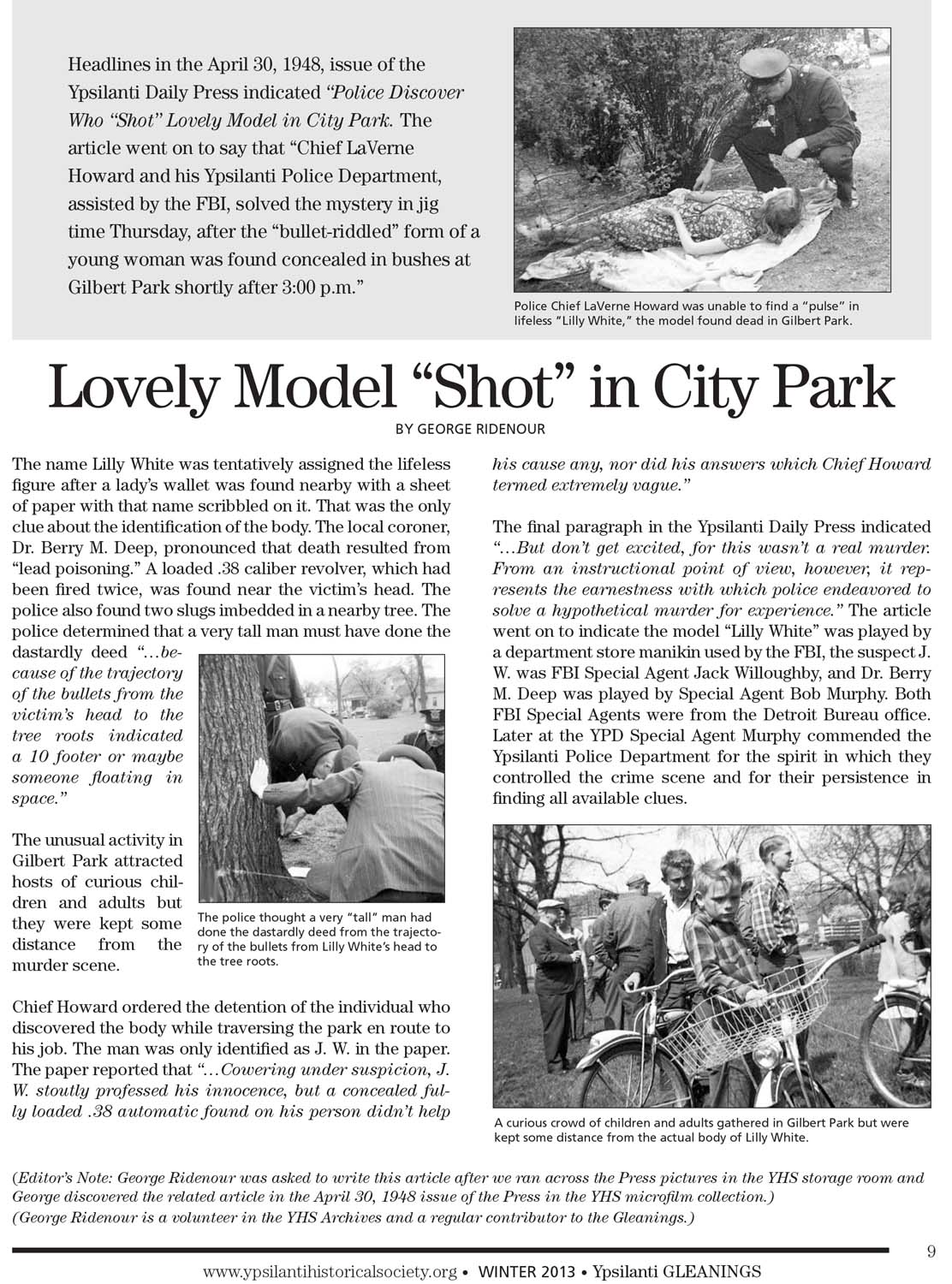 Headlines in the April 30, 1948, issue of the Ypsilanti Daily Press indicated “Police Discover Who “Shot” Lovely Model in City Park. The article went on to say that “Chief LaVerne Howard and his Ypsilanti Police Department, assisted by the FBI, solved the mystery in jig time Thursday, after the “bullet-riddled” form of a young woman was found concealed in bushes at Gilbert Park shortly after 3:00 p.m.” The name Lilly White was tentatively assigned the lifeless figure after a lady’s wallet was found nearby with a sheet of paper with that name scribbled on it. That was the only clue about the identification of the body. The local coroner, Dr. Berry M. Deep, pronounced that death resulted from “lead poisoning.” A loaded .38 caliber revolver, which had been fired twice, was found near the victim’s head. The police also found two slugs imbedded in a nearby tree. The police determined that a very tall man must have done the dastardly deed “…because of the trajectory of the bullets from the victim’s head to the tree roots indicated a 10 footer or maybe someone floating in space.” The unusual activity in Gilbert Park attracted hosts of curious children and adults but they were kept some distance from the murder scene. Chief Howard ordered the detention of the individual who discovered the body while traversing the park en route to his job. The man was only identified as J. W. in the paper. The paper reported that "…Cowering under suspicion, J. W. stoutly professed his innocence, but a concealed fully loaded .38 automatic found on his person didn’t help his cause any, nor did his answers which Chief Howard termed extremely vague.” The final paragraph in the Ypsilanti Daily Press indicated “…But don’t get excited, for this wasn’t a real murder. From an instructional point of view, however, it represents the earnestness with which police endeavored to solve a hypothetical murder for experience.” The article went on to indicate the model “Lilly White” was played by a department store manikin used by the FBI, the suspect J. W. was FBI Special Agent Jack Willoughby, and Dr. Berry M. Deep was played by Special Agent Bob Murphy. Both FBI Special Agents were from the Detroit Bureau office. Later at the YPD Special Agent Murphy commended the Ypsilanti Police Department for the spirit in which they controlled the crime scene and for their persistence in finding all available clues. (Editor’s Note: George Ridenour was asked to write this article after we ran across the Press pictures in the YHS storage room and George discovered the related article in the April 30, 1948 issue of the Press in the YHS microfilm collection.) (George Ridenour is a volunteer in the YHS Archives and a regular contributor to the Gleanings.)

Photo 2: The police thought a very “tall” man had done the dastardly deed from the trajectory of the bullets from Lilly White’s head to the tree roots.

Photo 3: A curious crowd of children and adults gathered in Gilbert Park but were kept some distance from the actual body of Lilly White.