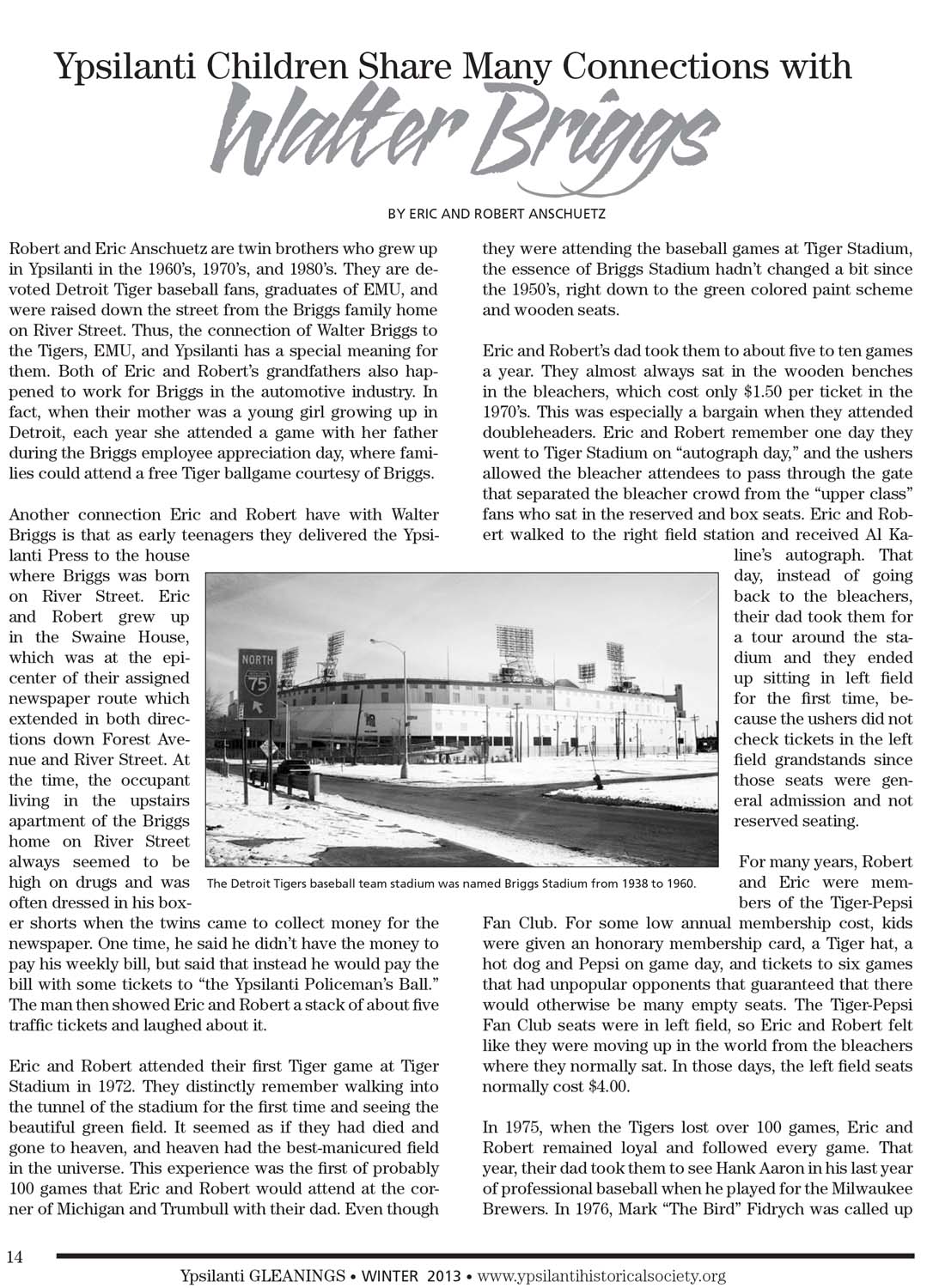 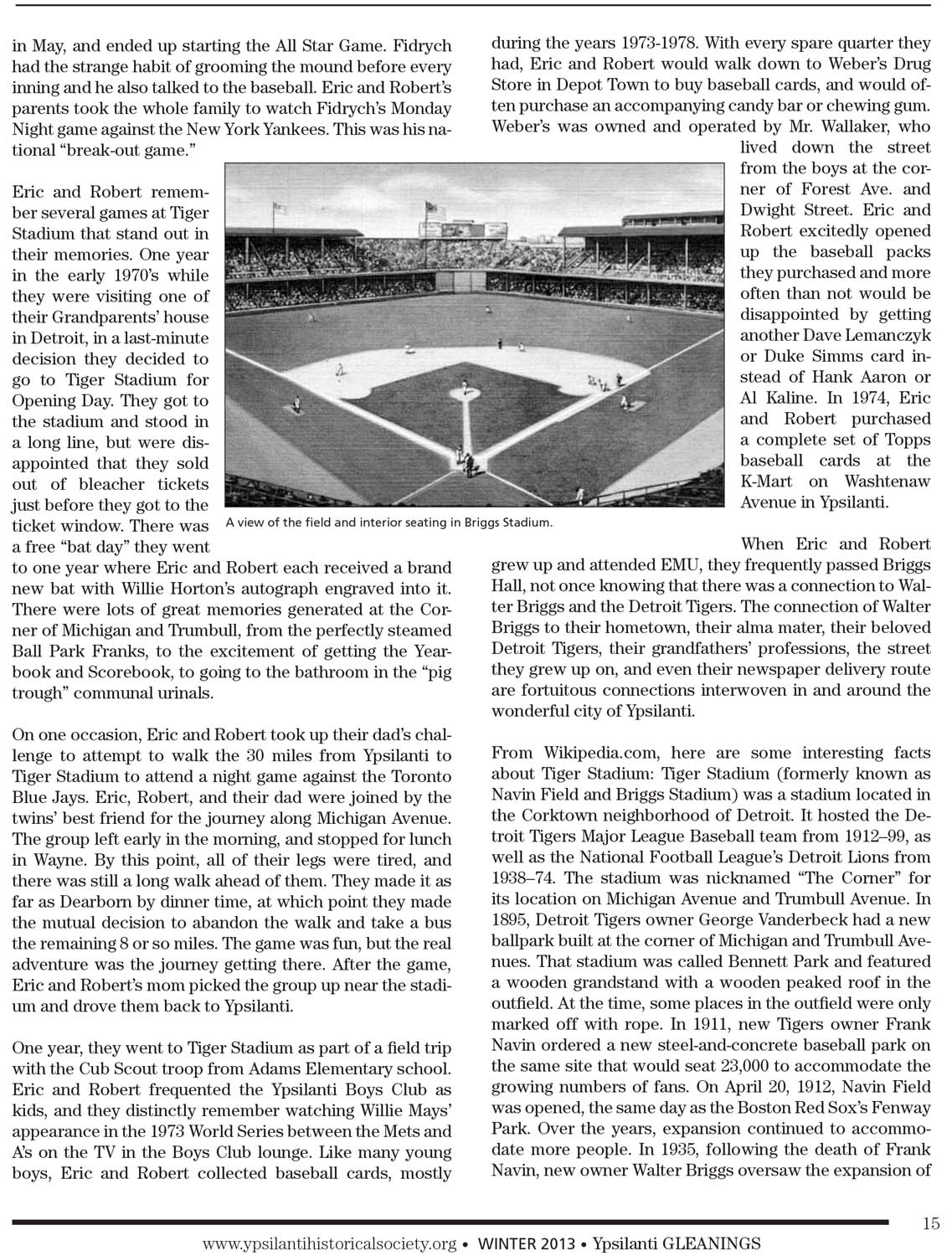 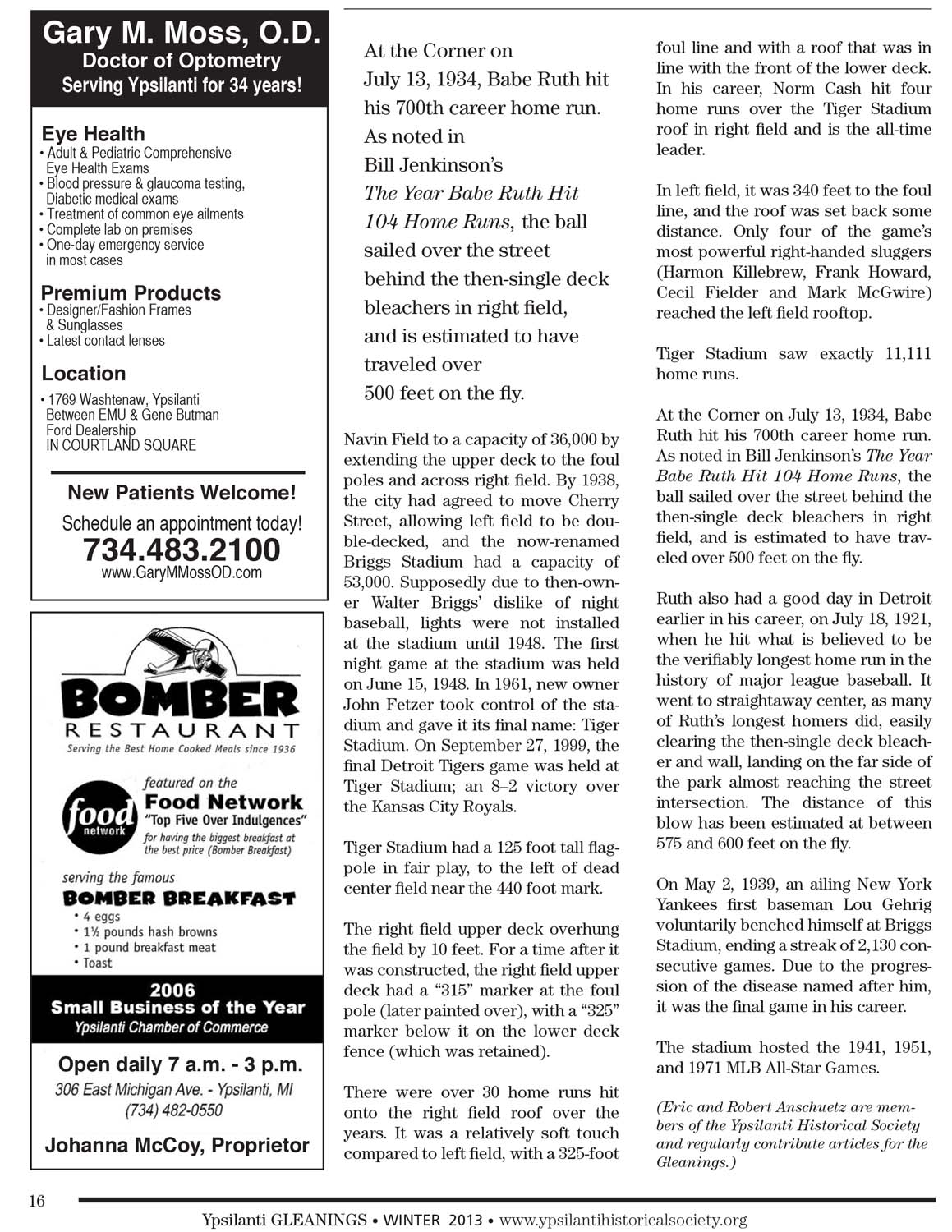 Robert and Eric Anschuetz are twin brothers who grew up in Ypsilanti in the 1960’s, 1970’s, and 1980’s. They are devoted Detroit Tiger baseball fans, graduates of EMU, and were raised down the street from the Briggs family home on River Street. Thus, the connection of Walter Briggs to the Tigers, EMU, and Ypsilanti has a special meaning for them. Both of Eric and Robert’s grandfathers also happened to work for Briggs in the automotive industry. In fact, when their mother was a young girl growing up in Detroit, each year she attended a game with her father during the Briggs employee appreciation day, where families could attend a free Tiger ballgame courtesy of Briggs.

Another connection Eric and Robert have with Walter Briggs is that as early teenagers they delivered the Ypsilanti Press to the house where Briggs was born on River Street. Eric and Robert grew up in the Swaine House, which was at the epicenter of their assigned newspaper route which extended in both directions down Forest Avenue and River Street. At the time, the occupant living in the upstairs apartment of the Briggs home on River Street always seemed to be high on drugs and was often dressed in his boxer shorts when the twins came to collect money for the newspaper. One time, he said he didn’t have the money to pay his weekly bill, but said that instead he would pay the bill with some tickets to “the Ypsilanti Policeman’s Ball.” The man then showed Eric and Robert a stack of about five traffic tickets and laughed about it.

Eric and Robert attended their first Tiger game at Tiger Stadium in 1972. They distinctly remember walking into the tunnel of the stadium for the first time and seeing the beautiful green field. It seemed as if they had died and gone to heaven, and heaven had the best-manicured field in the universe. This experience was the first of probably 100 games that Eric and Robert would attend at the corner of Michigan and Trumbull with their dad. Even though they were attending the baseball games at Tiger Stadium, the essence of Briggs Stadium hadn’t changed a bit since the 1950’s, right down to the green colored paint scheme and wooden seats.

Eric and Robert’s dad took them to about five to ten games a year. They almost always sat in the wooden benches in the bleachers, which cost only $1.50 per ticket in the 1970’s. This was especially a bargain when they attended doubleheaders. Eric and Robert remember one day they went to Tiger Stadium on “autograph day,” and the ushers allowed the bleacher attendees to pass through the gate that separated the bleacher crowd from the “upper class” fans who sat in the reserved and box seats. Eric and Robert walked to the right field station and received Al Kaline’s autograph. That day, instead of going back to the bleachers, their dad took them for a tour around the stadium and they ended up sitting in left field for the first time, because the ushers did not check tickets in the left field grandstands since those seats were general admission and not reserved seating.

For many years, Robert and Eric were members of the Tiger-Pepsi Fan Club. For some low annual membership cost, kids were given an honorary membership card, a Tiger hat, a hot dog and Pepsi on game day, and tickets to six games that had unpopular opponents that guaranteed that there would otherwise be many empty seats. The Tiger-Pepsi Fan Club seats were in left field, so Eric and Robert felt like they were moving up in the world from the bleachers where they normally sat. In those days, the left field seats normally cost $4.00.

In 1975, when the Tigers lost over 100 games, Eric and Robert remained loyal and followed every game. That year, their dad took them to see Hank Aaron in his last year of professional baseball when he played for the Milwaukee Brewers. In 1976, Mark “The Bird” Fidrych was called up in May, and ended up starting the All Star Game. Fidrych had the strange habit of grooming the mound before every inning and he also talked to the baseball. Eric and Robert’s parents took the whole family to watch Fidrych’s Monday Night game against the New York Yankees. This was his national “break-out game.”

Eric and Robert remember several games at Tiger Stadium that stand out in their memories. One year in the early 1970’s while they were visiting one of their Grandparents’ house in Detroit, in a last-minute decision they decided to go to Tiger Stadium for Opening Day. They got to the stadium and stood in a long line, but were disappointed that they sold out of bleacher tickets just before they got to the ticket window. There was a free “bat day” they went to one year where Eric and Robert each received a brand new bat with Willie Horton’s autograph engraved into it. There were lots of great memories generated at the Corner of Michigan and Trumbull, from the perfectly steamed Ball Park Franks, to the excitement of getting the Yearbook and Scorebook, to going to the bathroom in the “pig trough” communal urinals.

On one occasion, Eric and Robert took up their dad’s challenge to attempt to walk the 30 miles from Ypsilanti to Tiger Stadium to attend a night game against the Toronto Blue Jays. Eric, Robert, and their dad were joined by the twins’ best friend for the journey along Michigan Avenue. The group left early in the morning, and stopped for lunch in Wayne. By this point, all of their legs were tired, and there was still a long walk ahead of them. They made it as far as Dearborn by dinner time, at which point they made the mutual decision to abandon the walk and take a bus the remaining 8 or so miles. The game was fun, but the real adventure was the journey getting there. After the game, Eric and Robert’s mom picked the group up near the stadium and drove them back to Ypsilanti.

One year, they went to Tiger Stadium as part of a field trip with the Cub Scout troop from Adams Elementary school. Eric and Robert frequented the Ypsilanti Boys Club as kids, and they distinctly remember watching Willie Mays’ appearance in the 1973 World Series between the Mets and A’s on the TV in the Boys Club lounge. Like many young boys, Eric and Robert collected baseball cards, mostly during the years 1973-1978. With every spare quarter they had, Eric and Robert would walk down to Weber’s Drug Store in Depot Town to buy baseball cards, and would often purchase an accompanying candy bar or chewing gum. Weber’s was owned and operated by Mr. Wallaker, who lived down the street from the boys at the corner of Forest Ave. and Dwight Street. Eric and Robert excitedly opened up the baseball packs they purchased and more often than not would be disappointed by getting another Dave Lemanczyk or Duke Simms card instead of Hank Aaron or Al Kaline. In 1974, Eric and Robert purchased a complete set of Topps baseball cards at the K-Mart on Washtenaw Avenue in Ypsilanti.

When Eric and Robert grew up and attended EMU, they frequently passed Briggs Hall, not once knowing that there was a connection to Walter Briggs and the Detroit Tigers. The connection of Walter Briggs to their hometown, their alma mater, their beloved Detroit Tigers, their grandfathers’ professions, the street they grew up on, and even their newspaper delivery route are fortuitous connections interwoven in and around the wonderful city of Ypsilanti.

From Wikipedia.com, here are some interesting facts about Tiger Stadium: Tiger Stadium (formerly known as Navin Field and Briggs Stadium) was a stadium located in the Corktown neighborhood of Detroit. It hosted the Detroit Tigers Major League Baseball team from 1912–99, as well as the National Football League's Detroit Lions from 1938–74. The stadium was nicknamed "The Corner" for its location on Michigan Avenue and Trumbull Avenue. In 1895, Detroit Tigers owner George Vanderbeck had a new ballpark built at the corner of Michigan and Trumbull Avenues. That stadium was called Bennett Park and featured a wooden grandstand with a wooden peaked roof in the outfield. At the time, some places in the outfield were only marked off with rope. In 1911, new Tigers owner Frank Navin ordered a new steel-and-concrete baseball park on the same site that would seat 23,000 to accommodate the growing numbers of fans. On April 20, 1912, Navin Field was opened, the same day as the Boston Red Sox's Fenway Park. Over the years, expansion continued to accommodate more people. In 1935, following the death of Frank Navin, new owner Walter Briggs oversaw the expansion of Navin Field to a capacity of 36,000 by extending the upper deck to the foul poles and across right field. By 1938, the city had agreed to move Cherry Street, allowing left field to be double-decked, and the now-renamed Briggs Stadium had a capacity of 53,000. Supposedly due to then-owner Walter Briggs' dislike of night baseball, lights were not installed at the stadium until 1948. The first night game at the stadium was held on June 15, 1948. In 1961, new owner John Fetzer took control of the stadium and gave it its final name: Tiger Stadium. On September 27, 1999, the final Detroit Tigers game was held at Tiger Stadium; an 8–2 victory over the Kansas City Royals.

Tiger Stadium had a 125 foot tall flagpole in fair play, to the left of dead center field near the 440 foot mark.

There were over 30 home runs hit onto the right field roof over the years. It was a relatively soft touch compared to left field, with a 325-foot foul line and with a roof that was in line with the front of the lower deck. In his career, Norm Cash hit four home runs over the Tiger Stadium roof in right field and is the all-time leader.

In left field, it was 340 feet to the foul line, and the roof was set back some distance. Only four of the game's most powerful right-handed sluggers (Harmon Killebrew, Frank Howard, Cecil Fielder and Mark McGwire) reached the left field rooftop.

At the Corner on July 13, 1934, Babe Ruth hit his 700th career home run. As noted in Bill Jenkinson's The Year Babe Ruth Hit 104 Home Runs, the ball sailed over the street behind the then-single deck bleachers in right field, and is estimated to have traveled over 500 feet on the fly.

Ruth also had a good day in Detroit earlier in his career, on July 18, 1921, when he hit what is believed to be the verifiably longest home run in the history of major league baseball. It went to straightaway center, as many of Ruth's longest homers did, easily clearing the then-single deck bleacher and wall, landing on the far side of the park almost reaching the street intersection. The distance of this blow has been estimated at between 575 and 600 feet on the fly.

On May 2, 1939, an ailing New York Yankees first baseman Lou Gehrig voluntarily benched himself at Briggs Stadium, ending a streak of 2,130 consecutive games. Due to the progression of the disease named after him, it was the final game in his career.

(Eric and Robert Anschuetz are members of the Ypsilanti Historical Society and regularly contribute articles for the Gleanings.)

Photo 1: The Detroit Tigers baseball team stadium was named Briggs Stadium from 1938 to 1960.

Photo 2: A view of the field and interior seating in Briggs Stadium.