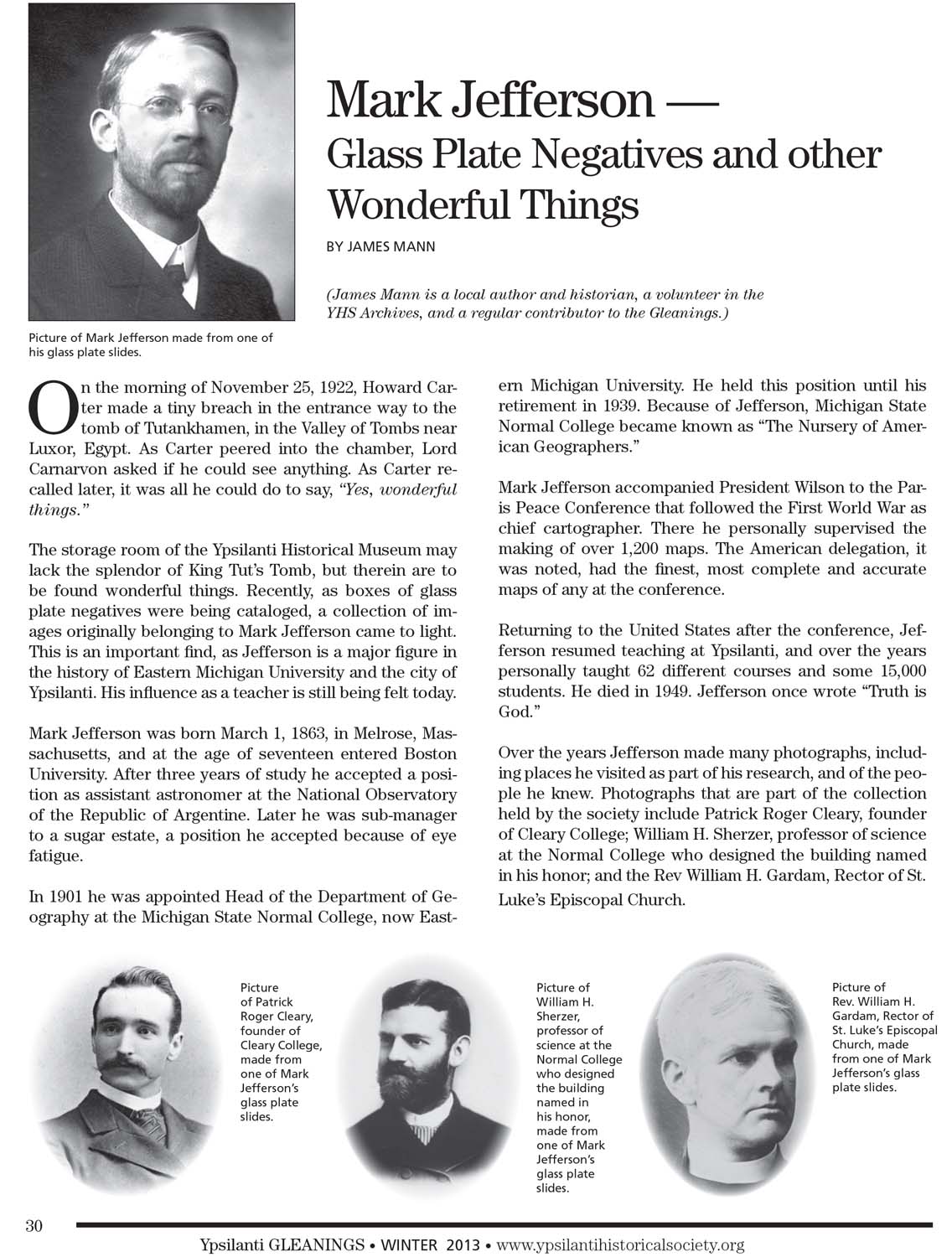 On the morning of November 25, 1922, Howard Carter made a tiny breach in the entrance way to the tomb of Tutankhamen, in the Valley of Tombs near Luxor, Egypt. As Carter peered into the chamber, Lord Carnarvon asked if he could see anything. As Carter recalled later, it was all he could do to say, “Yes, wonderful things.”

The storage room of the Ypsilanti Historical Museum may lack the splendor of King Tut’s Tomb, but therein are to be found wonderful things. Recently, as boxes of glass plate negatives were being cataloged, a collection of images originally belonging to Mark Jefferson came to light. This is an important find, as Jefferson is a major figure in the history of Eastern Michigan University and the city of Ypsilanti. His influence as a teacher is still being felt today.

Mark Jefferson was born March 1, 1863, in Melrose, Massachusetts, and at the age of seventeen entered Boston University. After three years of study he accepted a position as assistant astronomer at the National Observatory of the Republic of Argentine. Later he was sub-manager to a sugar estate, a position he accepted because of eye fatigue.

Mark Jefferson accompanied President Wilson to the Paris Peace Conference that followed the First World War as chief cartographer. There he personally supervised the making of over 1,200 maps. The American delegation, it was noted, had the finest, most complete and accurate maps of any at the conference.

Returning to the United States after the conference, Jefferson resumed teaching at Ypsilanti, and over the years personally taught 62 different courses and some 15,000 students. He died in 1949. Jefferson once wrote “Truth is God.”

Over the years Jefferson made many photographs, including places he visited as part of his research, and of the people he knew. Photographs that are part of the collection held by the society include Patrick Roger Cleary, founder of Cleary College; William H. Sherzer, professor of science at the Normal College who designed the building named in his honor; and the Rev William H. Gardam, Rector of St. Luke’s Episcopal Church.

Photo 1: Picture of Mark Jefferson made from one of his glass plate slides.

Photo 2: Picture of Patrick Roger Cleary, founder of Cleary College, made from one of Mark Jefferson’s glass plate slides.

Photo 3: Picture of William H. Sherzer, professor of science at the Normal College who designed the building named in his honor, made from one of Mark Jefferson’s glass plate slides.